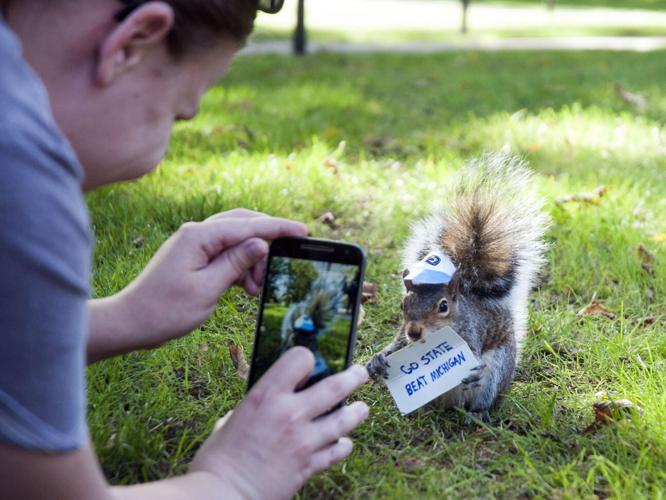 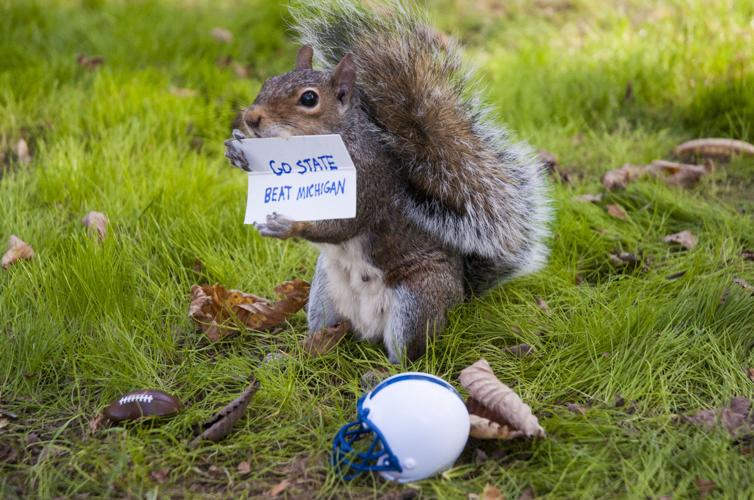 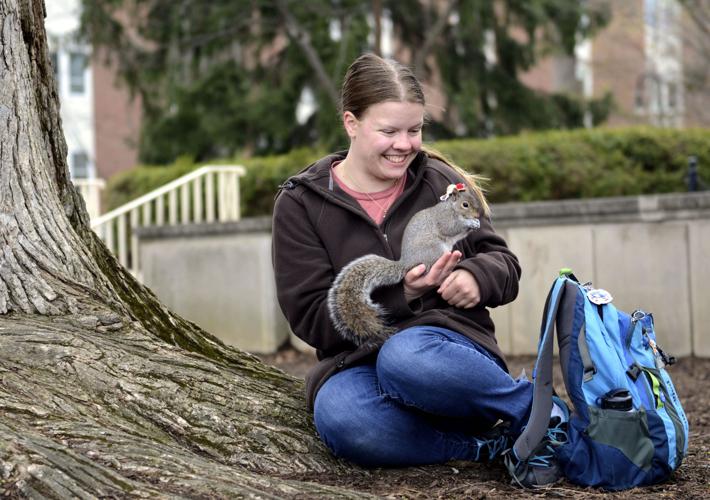 Mary Krupa holds a squirrel on Old Main on Friday, April 8, 2016. She said this particular squirrel is the one most photographed for her Facebook page "Sneezy the Penn State Squirrel."

Penn State students and faculty alike are often confused by the behavior of squirrels on campus, but it turns out that we’re the ones that made them nutty in the first place.

Students simply don’t know what to think when it comes to the squirrels that hop, skip and jump around campus. Squirrels on campus are overly friendly, fearless and bold, but what makes them act differently than “normal” squirrels?

“I stay away at all costs,” Caitlin Henley said of the squirrels on campus.

Although she doesn’t go near the animals, Henley said she’s frequently seen squirrels let people pet them or even pick them up. Henley also called the animals overly personable.

Nardella (sophomore-graphic design) said he hasn’t “seen them do anything weird, per say, but [he has] gotten really close to some of them and they just don’t move.”

Even though he hasn’t had “too many weird encounters,” Nardella doesn’t appreciate the animals’ tendency to run over his shoes while he’s walking across campus. Nardella also said the squirrels on campus “really have a mind of their own.”

So why are Penn State squirrels considered weird by so many?

Dreschel attributes the strange behavior of college squirrels in part to habituation. Since the squirrels “live near and among people who don't generally pose a threat to them, they become used to our presence” over time.

Dreschel also cites operant conditioning as a cause for the squirrels’ friendliness. When a lot of people offer food to the squirrels, “it increases the frequency that they will approach people in the future,” Dreschel said. The squirrels are being positively reinforced, or rewarded, for approaching people.

Dreschel recalled that her strangest experience with campus squirrels actually happened while visiting the UC Berkeley campus this past summer.

While eating lunch on a bench a few, “fairly large squirrels started to circle around [her] and stand on their hind legs to beg for food.” Dreschel said the encounter was “a little unnerving.”

Dreschel then noticed that one squirrel had circled around the back of the bench and was getting ready to jump up behind her.

“I was glad I saw it before it landed on my shoulder,” Dreschel said.

Even though the Penn State professor really likes squirrels, Dreschel said it was “a little creepy having them surround [her] like that,” and again attributes the behavior to students feeding the squirrels too much.