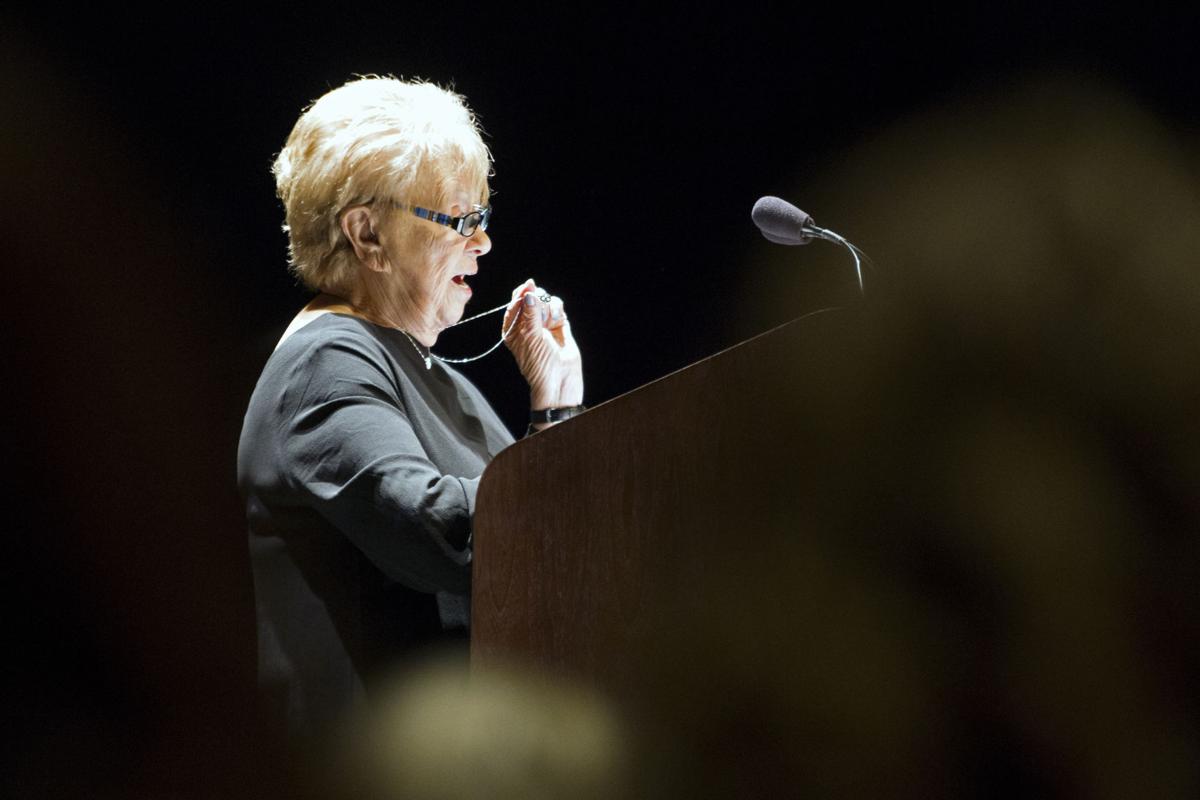 Holocaust survivor Irene Zisblatt shows off her necklace from her mother during her speech hosted by Penn State Hillel at the Eisenhower Auditorium on Tuesday, April 4, 2017. 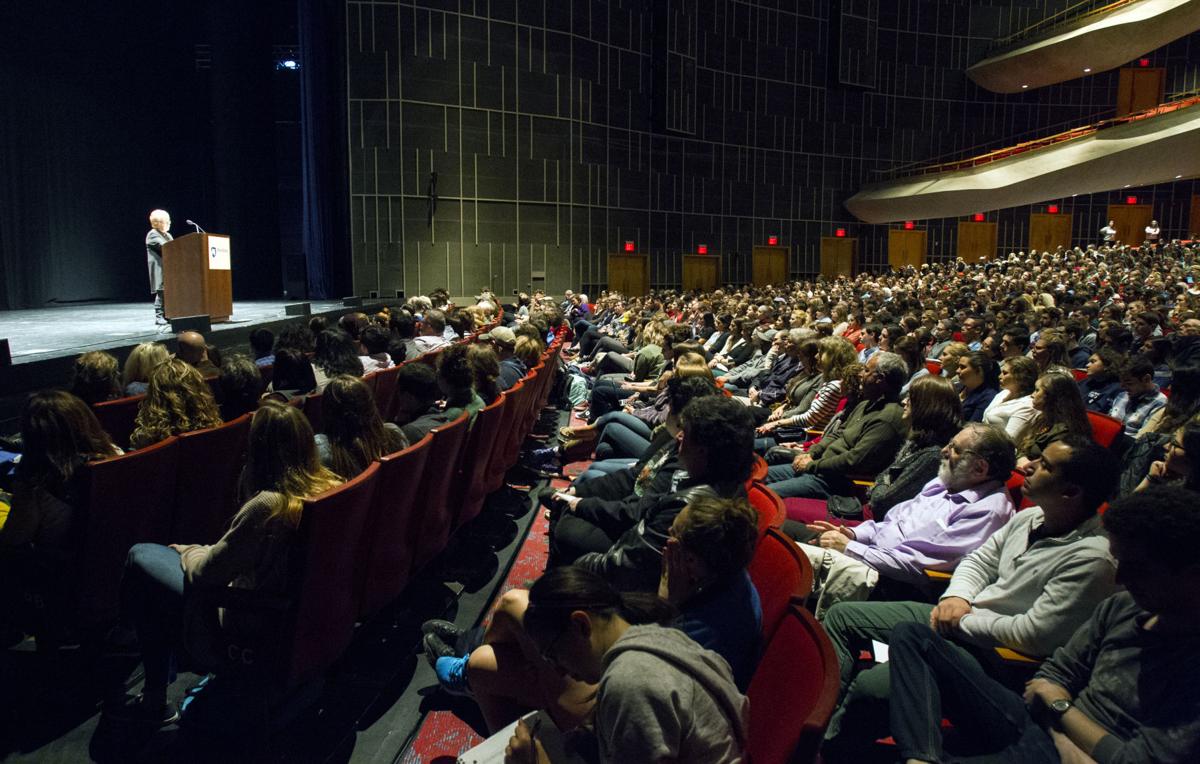 Although the Holocaust ended more than 70 years ago, whenever Irene Zisblatt sees a train or train tracks she can still remember all the details.

Zisblatt, born in a village in the Hungarian mountainside, is a Holocaust survivor. She held back tears as she shared her story of survival with a packed Eisenhower Auditorium on Tuesday night. Born in 1929, Zisblatt was the oldest of six children, she had four brothers and one sister.

As a 13-year-old inmate in Auschwitz-Birkenau, Zisblatt was subjected to Dr. Josef Mengele's experiments, among many other of the camp's horrors.

"I am a child survivor of a man's hatred, I am the only survivor of my family," Zisblatt said, starting off her story. "We must learn that genocide can happen at any time, at any place."

She took her audience through her family’s journey to Auschwitz. Zisblatt said she saw her family enter the death chamber and she doesn’t know why they let her live. She knew that she had to survive the darkness that was the Holocaust so that she could be the voices of the millions of children that were killed.

Around her neck hung a necklace with four diamonds that once belonged to her mother. Before the Nazis took Zisblatt's family to Auschwitz, her mother hid the jewels by sewing them into Irene's skirt. The diamonds were the only connection she had left of her mother, and Zisblatt took extreme measures to protect them. While in the Auschwitz camp, Zisblatt had to repeatedly swallow the diamonds and excrete them in order to keep them from being taken from her.

“Every time I saw danger I swallowed them,” Zisblatt said. “Once a week, once a month, [it] depends what happened that day.”

Zisblatt was on the brink of extermination as she was escorted to a gas chamber with 1,500 women. The gas chamber wasn’t big enough for all of the women to fit in, so Zisblatt dug her nails to the wood that surrounded the outside of the chamber. When the guards were ordered to shut the door, she was in the way and got pulled out of the doorway. Since she only weighed fifty pounds at the time, she hid in between the ceiling of the gas chamber and the shelter roof until a Jewish boy tasked with working the gas chamber found her. He covered her naked body with his jacket and sent her on a train leaving Auschwitz for a labor camp.

“I don't know what happened,” Zisblatt said. “I'm glad it did and that I'm here today.”

Zisblatt told the audience of her friend, Sabka, whom she met during one of Mengele’s experiments. Sabka and Zisblatt were separated for a while, each thinking the other were dead, but were reconnected at the labor camp.

“We didn't know if we could talk in this camp but we didn't have to,” Zisblatt said. “We knew we would be together.”

Sabka and Zisblatt were given wooden shoes and a blanket and were sent on a death march in the bitter cold of January 1945. Out of the 5,000 women sent on the march only 200 were left alive in April. Zisblatt and Sabka had planned to give up until planes came over the mountains and bombed everything that moved. Sabka pushed herself and Zisblatt into a nearby ditch where they hid out in until dark, then they made their escape. They were found by American soldiers in the morning who took care of them and gave them shelter. The audience was moved to tears when Zisblatt informed them that the next morning Sabka didn’t wake up. She had been very sick for a long time and died of typhus in her sleep.

“She’s in my heart all the time,” Zisblatt said through tears.

Zisblatt said despite the poison she was served in her soup at Auschwitz and the torture she endured, she has a six-foot tall son and a beautiful daughter who have given her five grandchildren, who she said bring her light every day.

An audience member asked how and when she told her children of the horrors she endured. Zisblatt said she told them she was a Holocaust survivor when her son brought home a project on it when he was thirteen and her daughter was eleven. After she told them, her son went to his room and didn’t ask any more about the Holocaust and refused to learn about it in school.

Zisblatt saw a free country, America, for the first time in 1947, when she came to live with an uncle who had contacted her two years prior. She said that she did not speak of her past for 50 years, because no one would have listened or believed a child. When "Schindler’s List" came out in 1994, she said she knew she had to begin talking about her experiences and bear witness to it as a lesson for humanity.

That same year she visited Auschwitz with teenagers from around the world on a March of The Living trip. Seeing how much evidence of the crimes committed was destroyed made her so angry she said wanted to hit someone. Zisblatt said she could still smell the strong chemicals within the gas chamber and she could feel the fear inside of her.

When she was leaving the gas chamber where she narrowly escaped death, she saw a vision of her family sitting at a dining table. But when she went to sit down with them, her mother told her it was not the time. As she went to hug her, they all disappeared. She then wrote a letter to her mother about how she would never forget what happened and how she would no longer stay silent.

"I still cannot believe I am alive today and have shared my past with the most powerful government in the world,” Zisblatt said. “Sharing the story with [the audience] is more important because you are the future government”

Zisblatt told the audience that they were the last generation that would hear survivor stories from the survivors themselves. She said it was important to recall the past so generations to come have more meaning.

“I live my pain time and time again so generations to come can learn from it,” Zisblatt said.

“Being older I have a new appreciation for her story,” Ingber said. “I’m appreciative of her and what she went through. People like her aspire us to embrace our Judaism.”

Ingber said the story of Zisblatt’s best friend, Sabka’s, death made her feel very grateful for what she has since many of her friends are Jewish and she couldn’t imagine putting herself through that experience.