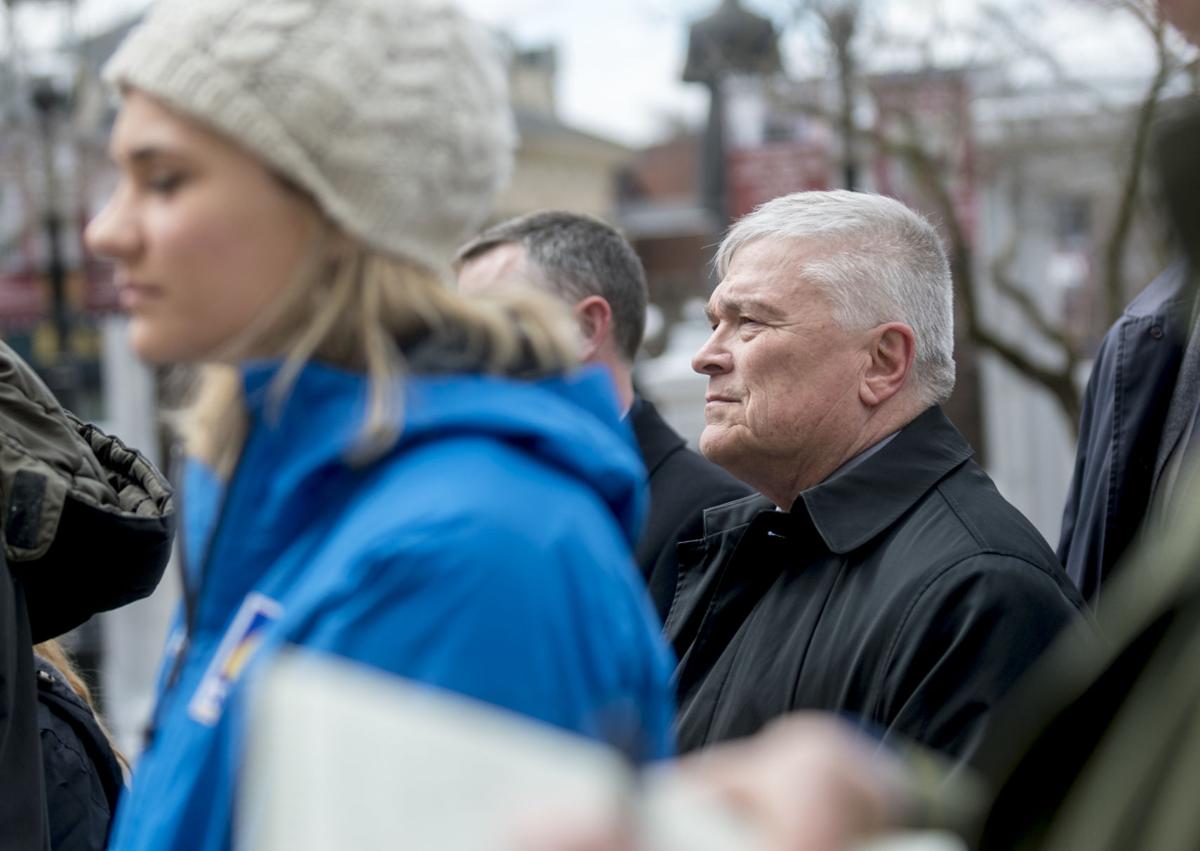 President Eric Barron listens to as Tom Kline, attorney for the Piazza family, addresses the media during a press conference explaining their role and feelings of new Timothy J. Piazza Antihazing legislation during the second Penn State Beta Theta Pi preliminary hearing at the Centre County Courthouse on Friday, March 23, 2018. 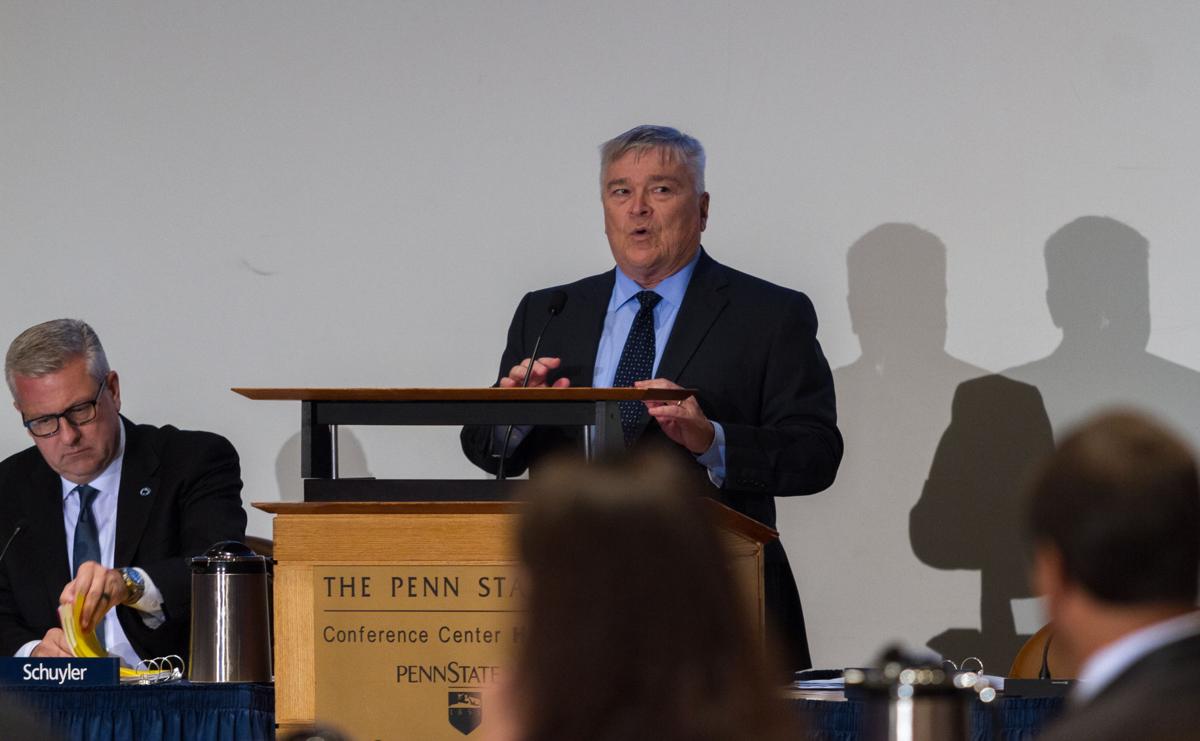 President Eric Barron speaks about the budget and tuition during th first meeting of the academic year is held at the Penn State Hotel and Conference Center on Friday, Sept. 15, 2017.

In May 2014, Eric Barron returned to Penn State to lead the university through a tumultuous series of state funding cuts, alumni unrest and the aftermath of the Jerry Sandusky sex abuse case.

After serving as the president of Florida State University for four years, the 68-year-old became Penn State’s 18th president after previously holding leadership positions at Penn State and other universities.

Although he is a graduate of Florida State and the University of Miami, Barron served as dean of Penn State’s College of Earth and Mineral Sciences from 2002 to 2006, and was a founding director of the Earth System Science Center.

Since taking up the position as Penn State president, Barron was named the third highest paid public university official in 2018, and has strived to make big changes at Penn State. Despite recent reports that Barron was one of 30 finalist candidates for University of Colorado president, his Penn State contract was extended last year through June 2022, and Barron said he has no plans to resign from his presidency.

Barron’s presidency thus far has been defined by moments, decisions and projects that have changed the Penn State community.

In November 2017, Florida State quarterback Jameis Winston was involved in an investigation of an alleged sexual assault. Although Winston wasn’t charged, the experience served as a lesson of media scrutiny to Barron.

In 2015, Barron released his opinion on the Jerry Sandusky child sex abuse case in 2015. The letter was entitled, “On the Challenges facing Penn State University Post-Sandusky.”

In the letter, he focused less on the case itself and more on the impact that it had on the university as a whole. Furthermore, he expressed his plans for how the university would move forward from the situation, including how social media backlash was taking a toll on the university.

“Now we realize that Penn State has paid a great price, far greater even than those who imposed the sanctions realized,” Barron said in the letter. “Your university will continue to set new achievement record for faculty, staff and students, but the level of conflict among alumni means that, even with the full reversal or approaching end of all sanctions, the healing process will continue to take time."

Most recently, Barron said there is no background in “crisis management” that can prepare someone in his position for when a problem or unfortunate situation arises.

“Unfortunately, crisis situations just appear. You’ve got 42-43,000 people that have some employment with the university. You’ve got a hundred thousand students. What’s the possibility that someone in a given year won’t do something that’s wrong or inappropriate?” Barron said in a December 2019 interview with The Daily Collegian.

Reflecting on the death of Timothy Piazza, Barron discussed how situations like untimely deaths or hazing aren’t considered “crisis management,” as they are more personal to the president of a university than an outsider may believe.

“You have the death of a student and in my position, you take it really personally because I’m a parent and you sort of project that and hear directly from a parent,” he said. “That is just incredibly painful. That’s not managing the issue, that’s just realizing ‘this shouldn’t have happened’ or ‘I don’t want that to happen.’”

When Barron returned to Penn State, in-state tuition for undergraduates stood at $16,090 per academic year — one of the highest totals in the country.

“There's a lot of discussion out there in the media whether colleges are delivering on their promise to help students be successful,” Barron told The Daily Collegian in 2014. “You have to make the case on the value of higher education and the value of that state appropriation to keep tuition low.”

The discussion of high tuition continues as Barron has spoken with student leaders, including those from the University Park Undergraduate Association (UPUA), and Damon Sims, vice president of Student Affairs, who said the Student Fee Board is not proud of Penn State’s tuition costs.

An enthusiastic believer in tuition freezing, Barron recounted his pride in his work surrounding access and affordability.

“I’ve been here five years and we’ve had three tuition freezes for in-state tuition,” Barron said. “A lot of commonwealth campus students have had zero for multiple years, and it goes beyond tuition in terms of programs like Summer PaSSS and Complete Penn State.”

Elaborating on the two initiatives that ensure students graduate whether they struggle financially or motivationally, Barron said he’s proud of the number of success stories the programs are producing.

“When you have 400 and some students that are about to drop out because of finances and you tap them on the shoulder because of philanthropy and you help them get to the finish line, I think of that 427 students from last year who were going to drop out who were within 30 credits and in good standing, there’s only seven or eight that aren’t graduating and that just feels really, really good,” Barron said.

Barron said he will never stop his efforts on access and affordability.

“‘Congratulations, you raised $500 million, you need $1.5 billion.’ Then we’ll really be having an impact,” Barron said. “I don’t think things like that will ever stop either, in terms of what we continue to have to do. I’d love to be able to say that the state now realizes how much of a public good higher education is, but the state does not.”

Barron said the most fulfilling moments that accompany his presidency are interacting with students.

“I came in the door giving speeches at every campus and this campus about different issues that I thought were extremely important — access and affordability being one,” Barron said. “But the good thing about the job is that there isn’t just one. Look at Invent Penn State. We have thousands of students going through there getting advice on how they can be good entrepreneurs. I thought we’d have six or seven, not 21.”

He said alumni often approach him with success stories, which only proves to him that the work he is doing at Penn State is helping others.

“Hundreds of students with internships, that feels really good because it’s so far beyond what I expected. I knew it was good and I knew it was something worth investing in, I just didn’t realize our students would jump on the chance to be involved in start-up weeks, entrepreneurship programs and helping to create their companies,” Barron said. “You would be amazed when you see a student who started that process and then they come tell you that they’ve raised $1.5 million in capital for their company, you just think, ‘Well that was a really good thing to do.’”

To account for Penn State faculty, Barron has been outspoken about the since-tabled guidelines that prevented faculty members from holding the interim mayor position in State College as a result of current Mayor Don Hahn vacating his seat.

“Penn State’s employees are caring members of their communities and many serve, or have served, as elected and appointed positions in local governments across the Commonwealth of Pennsylvania... including, of course, the Borough of State College,” Barron said in a letter.

Barron also noted that by excluding Penn State employees, the guidelines could also affect people of color from applying.

In regard to his future plans as president, Barron said he hopes to implement and innovative projects and programs, which include better representation for underrepresented students and faculty and commitment to evolving the university to its incoming student population.

“I’ll say, ‘Yeah if I had finished everything, I should have retired earlier,’” Barron said.”[As president] you should always be working on new things.

“Somewhere along the way, the next group of students had come in had thought this was a PR campaign, not an effort to get somethings done. That sort of halted in its tracks, this notion of, ‘Okay what do we do next that would make a more inclusive campus?’” Barron said. “We did see things for which the ideas were there, like I can’t tell you how wonderful it was to see the UPUA campaign, which says, ‘You’re welcome here’ all around this town. All of this is part of the same mindset.”

While Barron said he is proud of administrative and student leaders who work to promote an all-inclusive campus, he realizes that the student body is constantly changing.

“The student body is a very fluid group that is coming through the system, and we may sit there and think that we’ve done something and it makes sense and we’re seeing a lot of progress, but it doesn’t pass to the next set of leaders and the next set of leaders,” Barron said. “So one thing I think I would really like to think about is, ‘How do I have students lead this every year with new ideas, for which the administration then enables?’”

Barron admitted that the administration cannot rely on programs to solve problems.

A day in the life of Penn State President Eric Barron