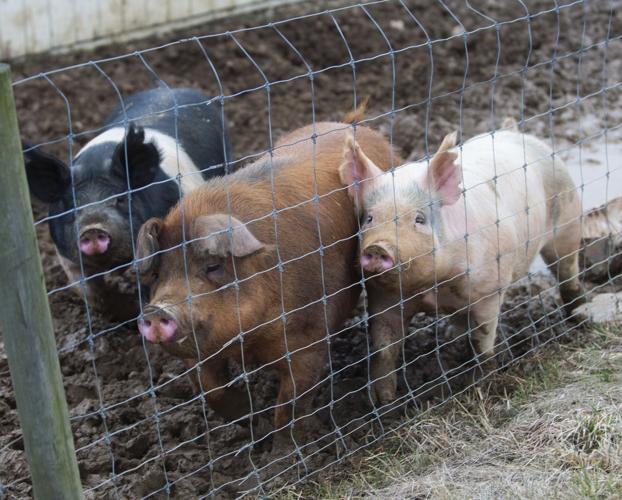 Pigs wait to be fed on the grounds of the Penn State Swine Center on Wednesday, Feb. 12, 2020. 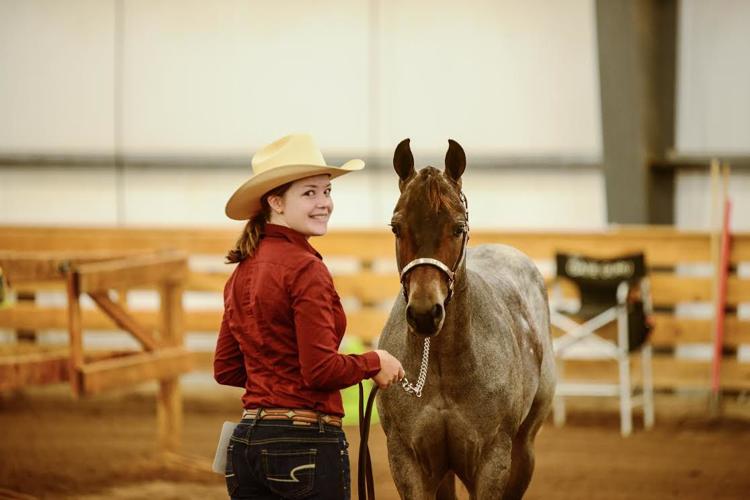 Margaret Brice, a student who works at the Equine Facilities. 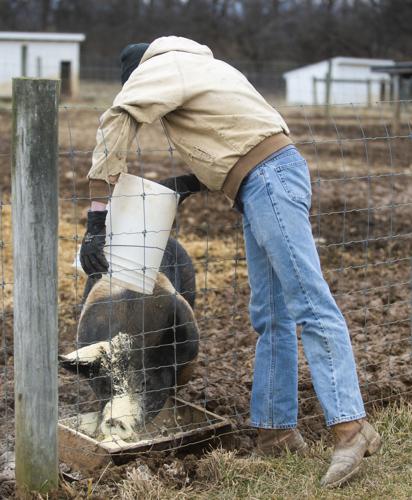 Eli Baker (senior - agricultural systems and management) feeds the pigs on the grounds of the Penn State Swine Center on Wednesday, Feb. 12, 2020.

Due to the spread of the coronavirus and the corresponding need for social distancing measures across the globe, Penn State has made an effort to move in-person campus activities to an online setting.

Some of these activities, however, cannot be replicated virtually — including the work of the campus farms.

Founded as an agricultural school, Penn State has a variety of farms on the outer edges of campus such as the Swine Center, Beef-Sheep Center, Dairy Barns, Equine Facilities and Poultry Education and Research Center.

Each of these farms are operated by full-time employees and student workers who are trying to obtain experience in the field of agriculture or animal science while earning money or credit hours for an internship.

Some students, referred to as “live-ins,” are also given the opportunity to live directly on the farm at which they work.

Head of the Department of Animal Science Terry Etherton said that under Pennsylvania law, all farms are considered essential businesses — a rule that also applies to the farms at Penn State.

Nadine Houck, the co-manager of the Dairy Barns alongside Travis Edwards, said the farms are “obviously an essential operation” because of the care the livestock require.

“We have 220 milking cows currently plus another 300 dry cows, calves and heifers,” Houck said via email. “Staying at home or telecommuting isn't an option for us.”

Because of this, Etherton said the campus farms have continued their operations as normally as possible while still adhering to all quarantine protocols released by Pennsylvania and the university.

Although the coronavirus-induced quarantine has presented the university with an unprecedented scenario, Etherton said the Department of Animal Science already had a plan in place to handle a variety of emergency situations — including a pandemic.

The pigs next door: Penn State students get opportunity to live, work on swine farm

After completing freshman year, it is customary for students to continue living in a dorm or…

This plan is a part of the Penn State Animal Care and Use Program’s involvement with the Association for Assessment and Accreditation of Laboratory Animal Care, an organization that has fully accredited the university since 2001.

According to Etherton, this plan includes making sure employees work from home for all tasks that can be completed remotely and scaling back non-essential research efforts. He added that any students who had gone home or traveled over spring break were not allowed to return to campus to work in order to limit potential spreading of the coronavirus.

“We are immensely grateful to the students who have stayed and are doing more than their normal share of the workload and also to our full-time employees who continue to pull together and make sure everything gets done and the animals are well cared for,” Houck said.

Etherton said all research projects that had not yet been started were postponed. Those that were nearing completion were instructed to continue so as not to waste already obtained data, but proper coronavirus prevention standards are being followed throughout the process.

Explaining what these standards entail, Houck said the daily operation of the facility involves social distancing and limiting unnecessary contact among the workers.

Student Susanna Raeisaenen — who is involved with the operation of the Dairy Barns through her Ph.D. program — said the experiment she has been working on was allowed to continue during the quarantine period as long as she and her fellow researchers followed the necessary protocols.

Raeisaenen (graduate-animal science) said this has involved washing her hands often, sanitizing all used surfaces with alcohol solution and doing as many tasks as possible alone.

She added some tasks cannot be done by just one person, but they are only allowed to have two researchers working at the barn at one time. Because of this, Raeisaenen said the researchers take shifts at the barn and complete their office-type work at home.

Raeisaenen said she is still adjusting to the concept of working from home.

“It takes time to adjust to a new routine and be productive,” she said. “But I have a little bit of a wider circle to move and the barn adds some schedule to my day.”

Unlike the research work, Raeisaenen said it takes more than two people at a time to operate the barns, so the full-time employees and live-in student workers have devised a separate schedule for minimizing the number of people at the barns while still providing enough manpower to accomplish the day’s tasks.

Raeisaenen said both the barn workers and the researchers are practicing social distancing as best as they can.

Raeisaenen also said that since students who relied upon Penn State housing or left State College for spring break were not allowed to return to campus, their workload had to be picked up by those who had stayed in the area.

Eli Baker — a student who works at the Swine Center — said the decreased number of student workers at the farm has “created a little more work” for those who are there, but he added daily operations have proceeded in relatively the same fashion.

Baker (senior-agricultural systems management) said the need to social distance as much as possible while on the farm has also resulted in a slight workload increase. For instance, Baker said two people used to feed the pigs in order to accomplish the task faster, but now this job is done by one person to be safe.

Aside from this, Baker said work for the center has proceeded as normal. Although he said he has been “feeling the effects that everyone has been feeling from being cooped up,” he has a bit more flexibility in his daily schedule since he no longer needs to go to campus for class.

Margaret Brice — a student who works at the Equine Facilities, or horse barn, on campus — agreed the switch to online learning and not having to walk to classes has given her a bit more time in the day.

Brice (junior-animal science) said she and the other students are in charge of more responsibilities at the barn, particularly with the foaling of the mares — the process by which the female horses give birth to their young.

Brice said there is usually a spring semester course that manages the foaling process, but, as classes are now being conducted online, it was no longer possible for these students to assist with this task.

She also said there are less students working at the barn due to leaving State College over spring break, another factor which has created more responsibilities.

Allison Hart — another student who works at the horse barn — said she and the other students have had to pick up more shifts and longer hours at the facility to distribute the work of the foaling process among one another.

According to Hart (sophomore-animal science), this has involved checking in with the mares and foals, as well as taking on night shifts to watch the mares. Hart said mares typically give birth between 6 a.m. and 6 p.m., which is why they need to be monitored on the nights when they are close to foaling.

Elaborating on the concept of higher workload, student Madi Heilveil said there are usually 14 students working in the spring semester in addition to the barn manager and assistant barn manager. Now, however, there are only six students.

Heilveil said despite the lower number of workers, it is still essential that the horses are taken care of in this quarantine period.

“We care so much about these horses, like they are our own,” she said. “It’s important that the animals are taken care of as they were before and that everyone makes the most of this situation.”

Brice said despite the challenges that have come with a lower number of workers, it has been “really cool to see how everyone has stepped up to pitch in.”

“It’s a really small group of people working now, and we get to spend more time together since we are the only ones here,” Brice said. “It’s been cool to have a tighter-knit group.”

Etherton said he has witnessed a similar support throughout the entire Animal Science Department, in spite of all the challenges they have been presented with.

“There’s a great sense of togetherness and rallying in this time,” Etherton said.

As people nationwide and in Centre County are told to stay home to mitigate any further spread of the coronavirus, many are looking into poten…