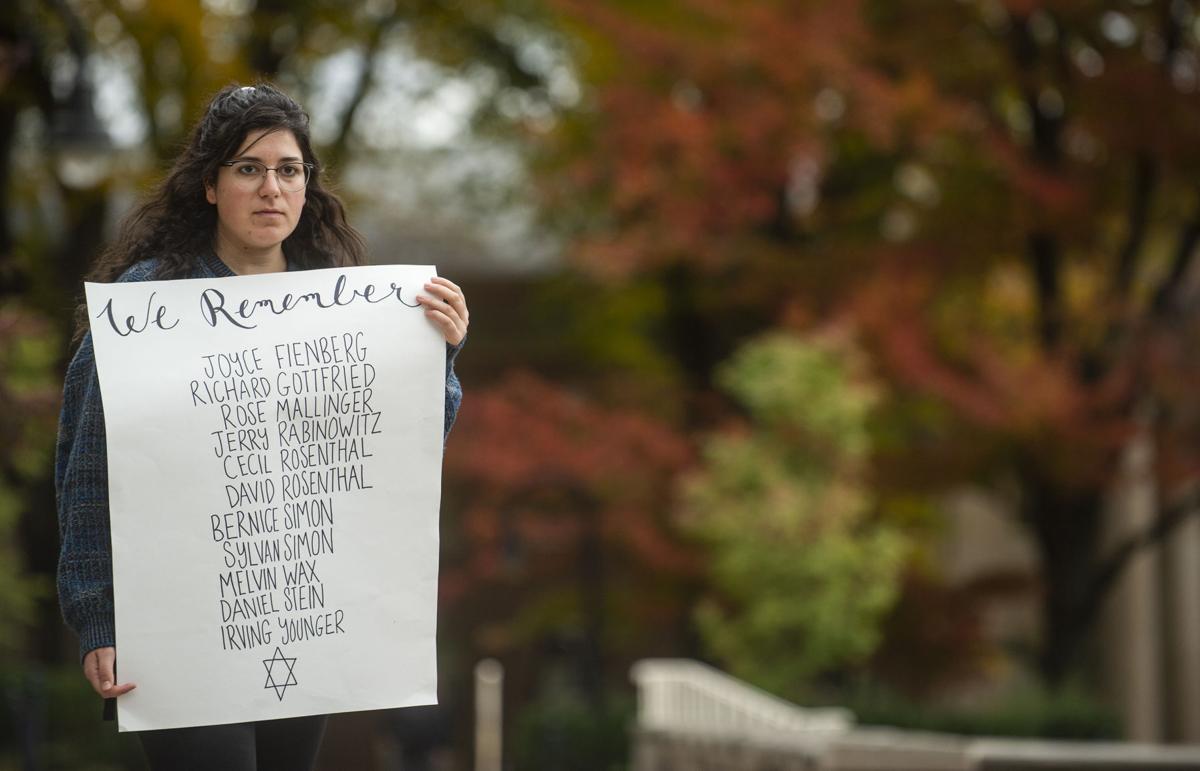 Ariel Sagie (senior-industrial engineering) holds a sign with the names of the victims during a Havdallah held on Old Main to commemorate the one year anniversary of the Tree of Life shooting in Pittsburgh on Sunday, Oct. 27, 2019. 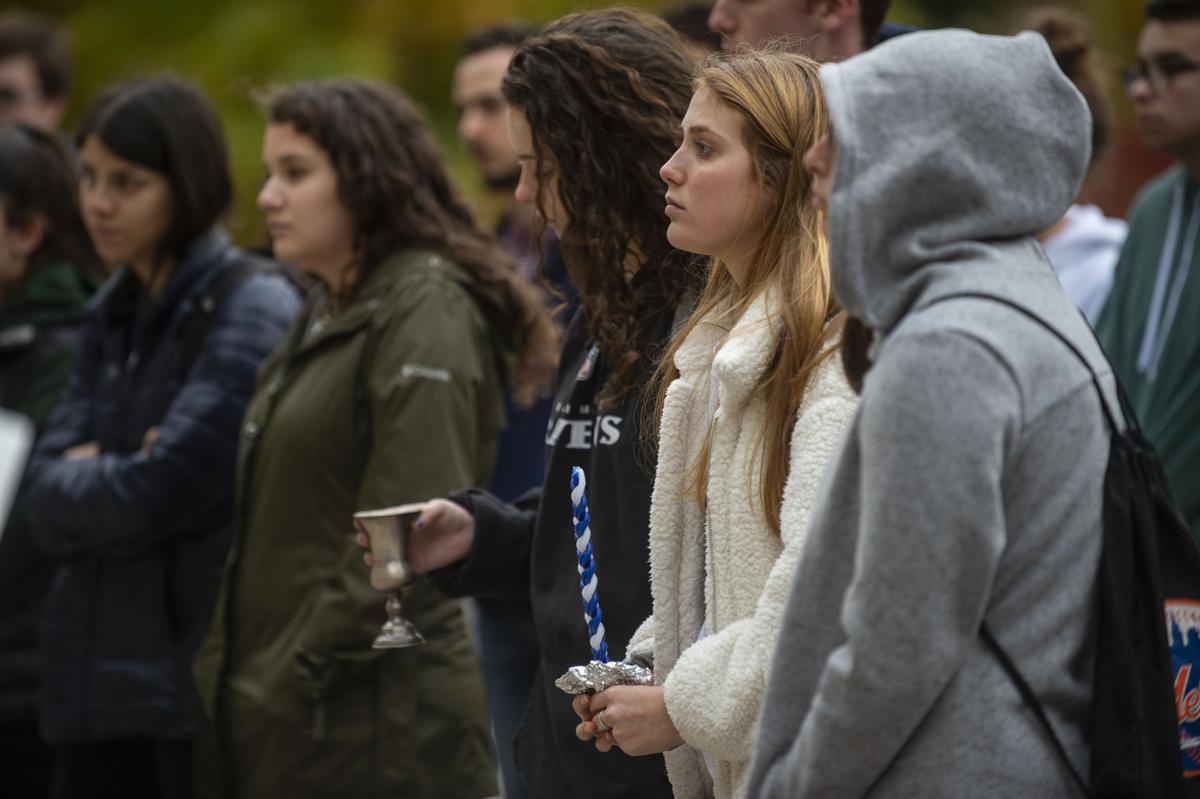 Emily Rosen (freshman-early elementary education) holds a candle during a Havdallah held on Old Main to commemorate the one year anniversary of the Tree of Life shooting in Pittsburgh on Sunday, Oct. 27, 2019. 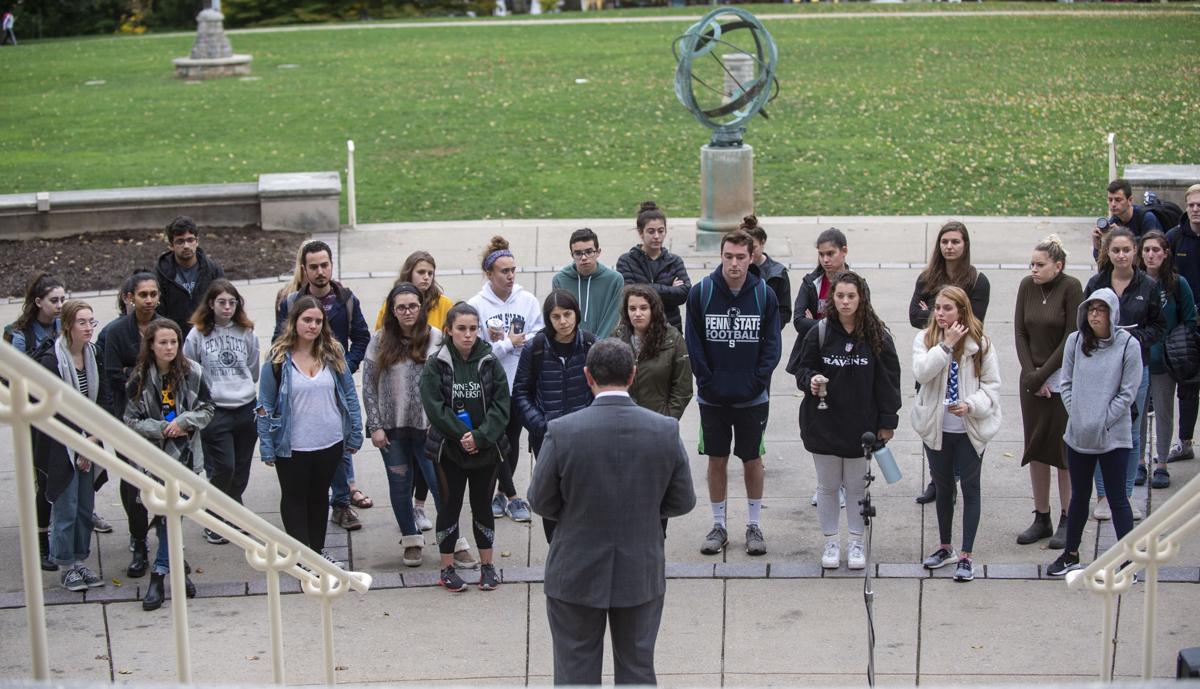 A group of people gather at Old Main to honor the one year anniversary of the Tree of Life shooting in Pittsburgh on Sunday, Oct. 27, 2019.

On the cloudy fall day of Sunday, Oct. 27, students from Penn State Hillel and other organizations gathered on Old Main Lawn, standing in stoic silence after reciting the names of those killed during the Tree of Life synagogue shooting.

Oct. 27 is the one-year anniversary of the shooting that occurred in the Squirrel Hill neighborhood in Pittsburgh. Last year during Shabbat morning services at the synagogue, a gunman killed 11 and injured six in what is now the deadliest anti-Semitic attack in American history.

Penn State Hillel hosted activities throughout the day to remember the events that transpired a year ago, and commemorate those who were lost. The day consisted of challah bread braiding, a lunch and learn, wrapping challah and writing the names of the victims, and a Havdalah memorial ceremony on Old Main Lawn.

When Penn State Hillel was deciding what activities to host, it was important that the group choose something meaningful that could make a difference to the Pittsburgh community.

“Now a year later, it’s about okay, ‘What can we do to move forward and actually help the community?’ which is why the proceeds of some of the challah that we’re selling today are going to go to the Victims of Terror Fund from the Pittsburgh Federation," Chad Finkelstein, president of Penn State Hillel, said.

The tragic events that took place in Pittsburgh hit close to home for a lot of students at Penn State. The lunch and learn gave students an outlet to open up and talk about how the Tree of Life Synagogue shootings personally affected them, even if they were not Jewish. The discussion was open to everyone.

“As someone who’s Jewish, this hits me really hard. It easily could have been my synagogue,” Finkelstein (senior-supply chain management) said. “It was interesting, because there was also someone at lunch and learn, who’s not Jewish, who’s not from the Pittsburgh community, but she happened to be in Squirrel Hill that day visiting her boyfriend. It was just very interesting to hear her perspective on these things, even though it wasn’t mabe a community she identified with before, she was geographically closer than anyone else in the room that day.”

According to Finkelstein, circumstances like the shooting transcend community, religion or where one is from — they unite everyone in support for the Squirrel Hill community and the Jewish community overall.

“It really impacted Hillel as a whole, as well as the Jewish community here at Penn State as a whole, because their families were there, they knew someone who knew someone that was there, and it just impacts how we feel as a Jewish student in the life of Judaism as a whole,” Halle Dennis, secretary of Penn State Hillel, said.

For Dennis (junior-biobehavioral health), the Day of Remembrance was all about the community reaffirming its faith and identity in Judaism. The activities Penn State Hillel hosted aimed to commemorate the past, as well as encourage people to be resilient, and stand up for what they believe in.

Later that day, Penn State Hillel hosted a Havdalah service on Old Main Lawn in memoriam of the Tree of Life Synagogue massacre.

Havdalah is a Jewish religious ceremony that symbolically marks the end of Shabbat.

Allie Ryave, vice president of Penn State Hillel, gave a speech about her visceral and personal connection to the Tree of Life shootings as a local from Squirrel Hill, Pittsburgh.

One year later: Pittsburgh Post-Gazette journalists on their coverage of the Tree of Life shooting

“The time following that shooting was a blur for me, but I don’t want to talk about that trauma," Ryave (junior-human development family studies and global studies) said. "I don’t want to give one more moment of satisfaction to the people in this world who are so hurt and misinformed they choose to inflict pain on others.”

Ryave instead said she chooses to focus on what guided her through a desperate time in her life when she needed a light.

“Penn State Hillel became my salvation and gave me purpose when I felt like there was none. By having an established Jewish community on this campus, I was able to find people who are also grieving alongside me, and understood my pain, and I don’t think I would have made it through without them,” Ryave said.

She encouraged the audience to be vigilant now more than ever in order to put an end to the harmful and hateful ideologies of white supremacists.

After Ryave spoke, Finkelstein read the names of the victims out loud and led the audience in the Mourner’s Kaddish, a traditional prayer recited in memory of the dead. What followed was a moment of complete silence, where the howling of the wind in the trees added to the heaviness in the remembrance of the lives that were lost.

Finally, Aaron Kaufman, the executive director of Penn State Hillel, led the audience in Havdalah, playing his guitar as the audience sang the Havdalah blessings together on the fall day.

'Chase it away with light': Community gathers to mourn lives of Squirrel Hill victims

In celebration of the release of Animal Crossing: New Horizons on the Nintendo Switch, Cartridges Video Games is giving away a Free Animal Cro…