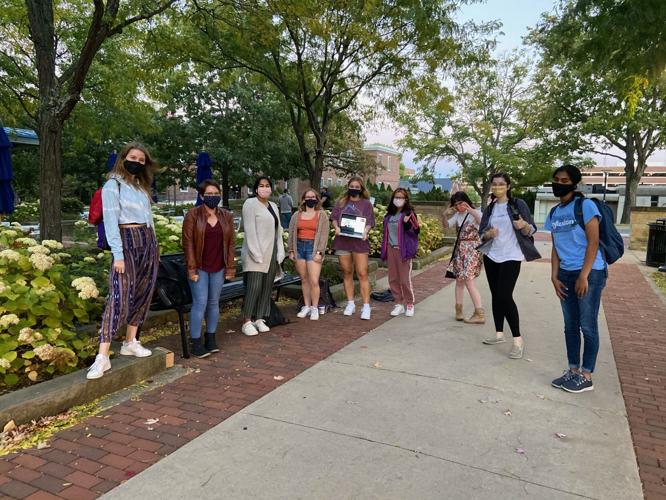 Members of the Days For Girls Operations Team pose for a photo at a club meeting at the Creamery. 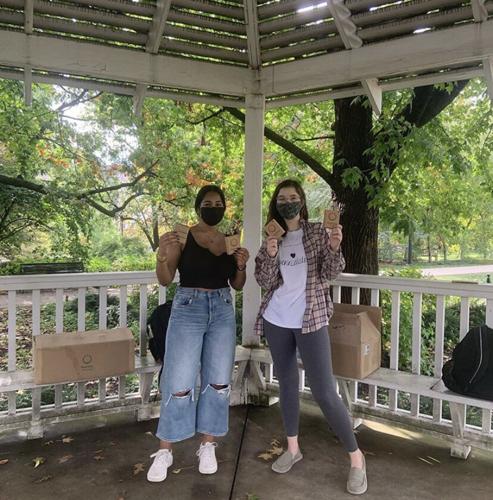 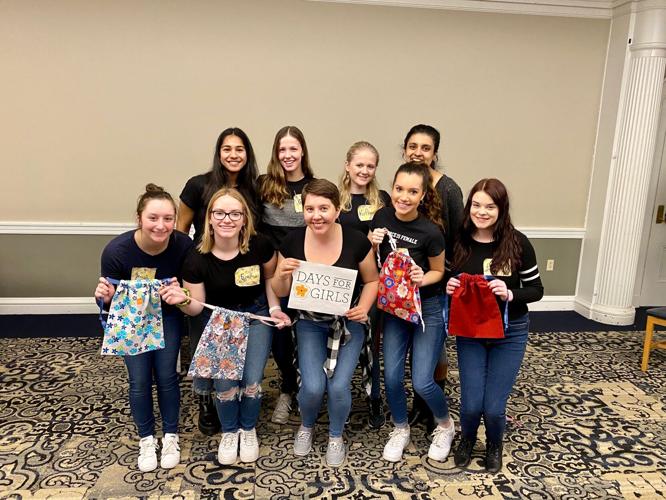 Members of Days For Girls Operations Team pose for a photo after a sewing event with Schreyer for Women in Atherton Hall during the spring 2020 semester.

Strait (junior-data science) is the president of Penn State’s Days for Girls. The club, which usually focuses on sewing and distributing menstrual kits with reusable pads, has had to press pause on its sewing operations for now due to coronavirus restrictions.

Instead, members have found themselves moving into the educational space and working to keep up virtual initiatives, such as the CampusCup project — the reason behind the large delivery.

“That was a lot of menstrual cups to have at my front door,” she said.

Days for Girls worked with OrganiCup — a menstrual cup company that strives to provide access to the sustainable alternative to other period products like pads and tampons — to provide 960 free menstrual cups to Penn State students who signed up to receive them.

“When [OrganiCups] asked how many we thought we could give out, I said 250, which I thought was a high estimate,” Strait said.

Strait said the entire initiative, called CampusCup, originally began as a hopeful giveaway of one or two cups to promote sustainable menstruation, but quickly grew into something bigger when she got in touch with the company.

“OrganiCup basically said, ‘We’ll do you one better,’” she said. “The [idea] was pretty much, ‘If you take on the responsibility of distributing these cups, we will send you as many as people sign up for in two weeks’… and that's what they did.”

Days for Girls Chair of Operations Shaka Ramanathan said a lot of planning, scheduling and hard work went into organizing the CampusCup initiative, but she felt it was well worth it.

“I’m so happy to know that the hundreds of menstrual cups we’ve ordered and distributed means that thousands of disposable products such as pads and tampons can be replaced,” Ramanathan (sophomore-psychology) said. “I feel thrilled knowing that we were able to give menstruators a chance to switch to a menstrual cup without the cost.”

For OrganiCup recipient Courtney Walter, moving away from single-use menstruation products was a major motivator for her signing up for a cup. The OrganiCup comes in three sizes: mini for those looking for a smaller size, size A for those who have not given birth and size B for those who have, according to OrganiCup’s “size guide” on its website.

“I was tired of the waste that pads and tampons made,” Walter (junior-agricultural science) said. “[The menstrual cups] are comfortable. I forget I have one in, and there’s no leaks.”

Strait feels the success of the initiative goes beyond CampusCups. She said she’s happy the club has gotten people to feel more comfortable talking about “that time of the month.”

“For me, the most exciting part about it is that we got a lot of people to be willing to talk about periods,” Strait said. “We’ve been trying to move into de-stigmatization space… People don’t like to talk about menstruation, and that's one of the reasons that our club exists. There is so much stigma, and that can make access to period products very difficult.”

Though the CampusCup initiative is still a pilot program, Penn State’s success with the program has inspired other campuses to sign up for the same initiative, Strait said.

Penn State’s Days for Girls is still working on distributing the menstrual cups.

Ramanathan has been involved with Days for Girls since she first arrived on campus, and coins her involvement in the club as “one of the best choices” she’s made as a student.

“ I love the progress that we’ve made as an org,” she said. “I’ve learned so much about menstruation, period poverty and advocacy by being a part of Days for Girls, and I love sharing it in any way that I can.”

Kaitlyn Kudriavetz is currently serving as The Daily Collegian's academic life reporter. She is a junior studying digital and print journalism with a business liberal arts minor.