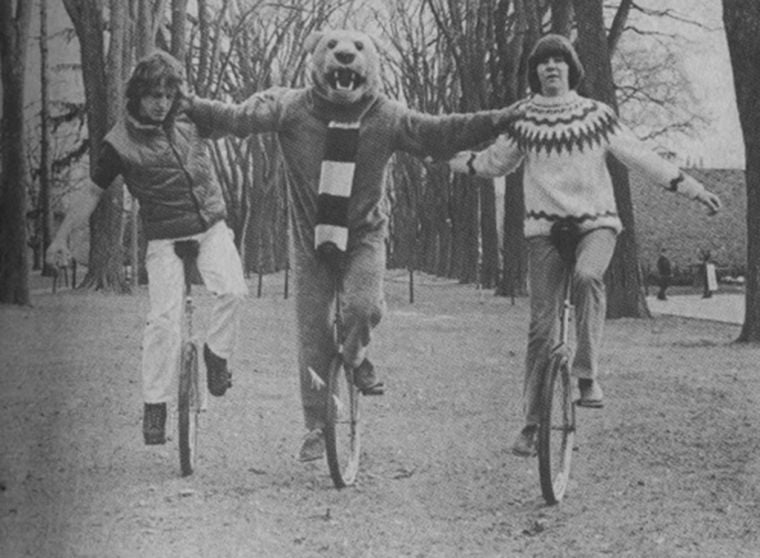 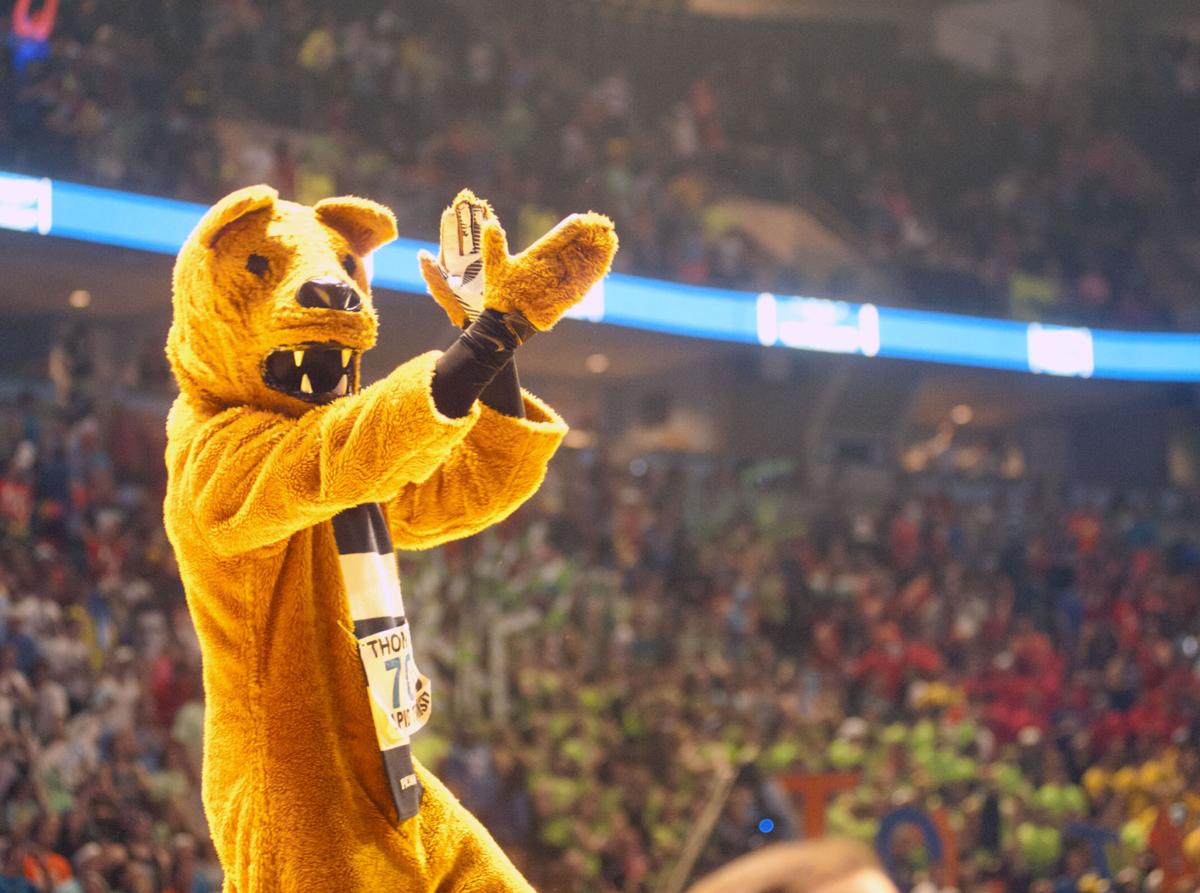 The nittany lion claps on stage before the talent show on Saturday night at the Bryce Jordan Center. 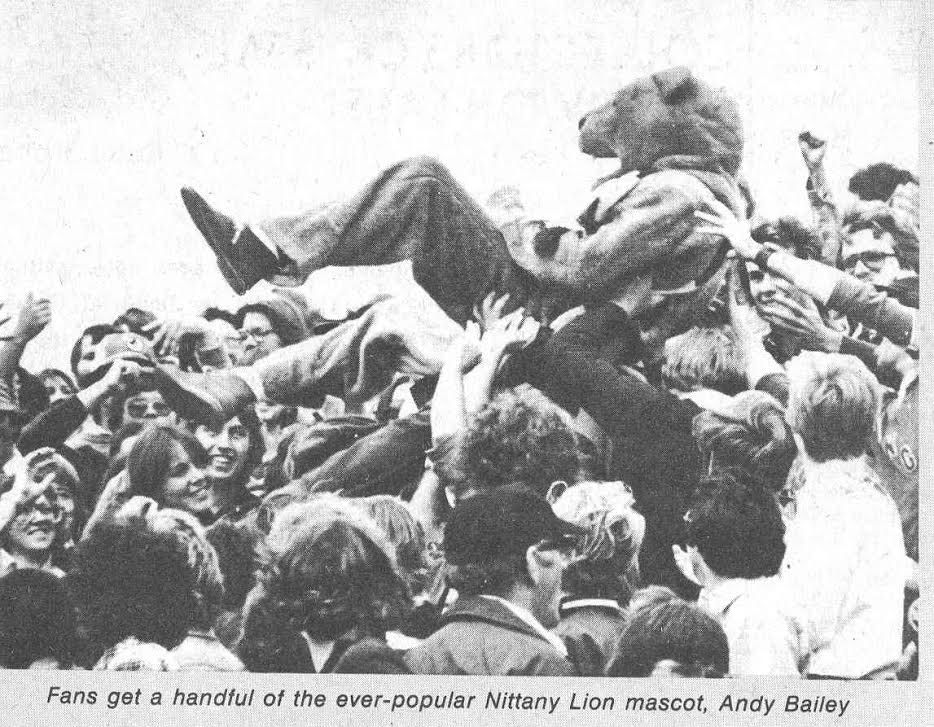 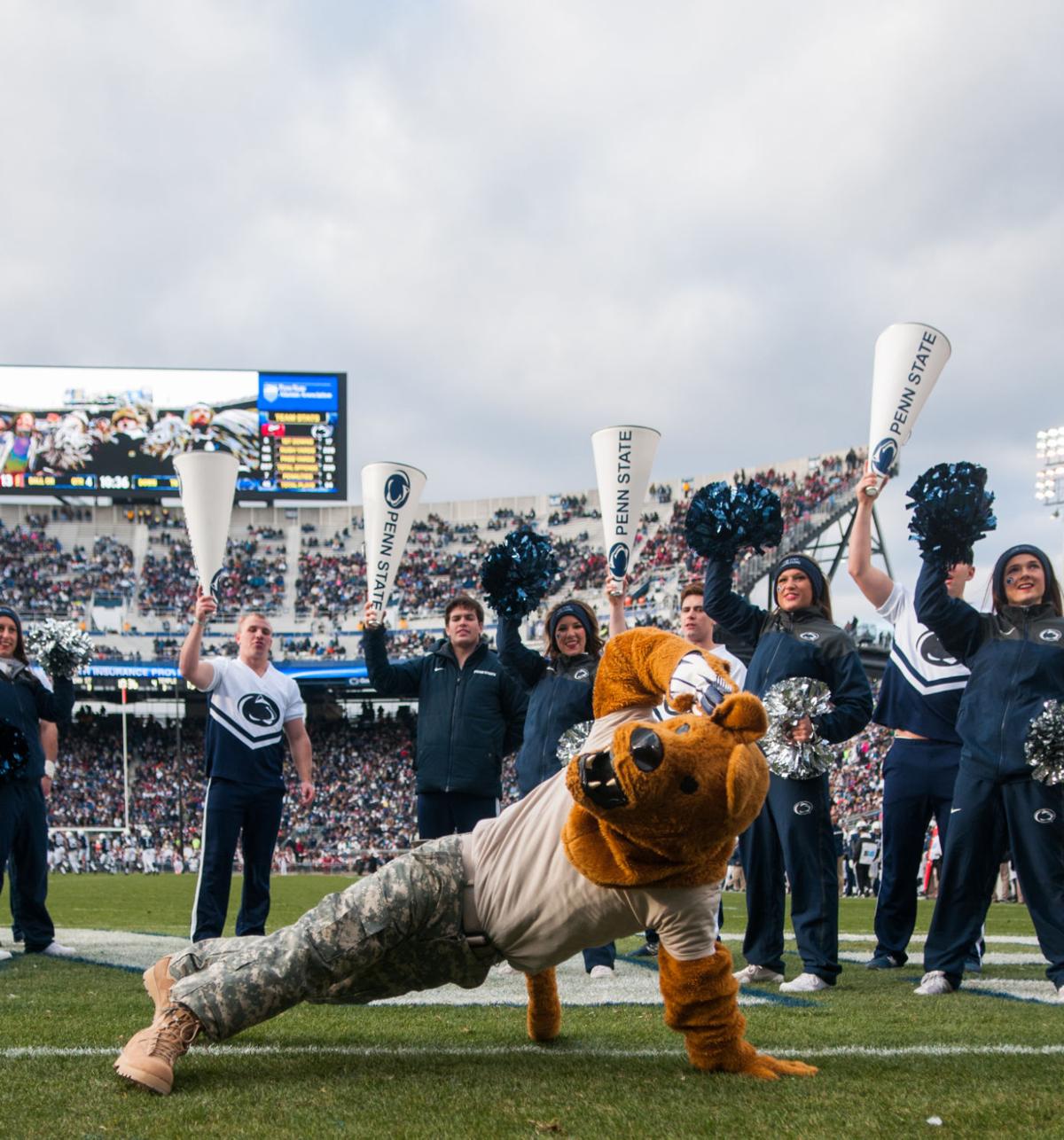 The Nittany Lion does 30 one armed push ups after a Sam Ficken field goal in the fourth quarter of a game against Temple at Beaver Stadium on Saturday, November 15, 2014. Penn State defeated Temple 30-13. 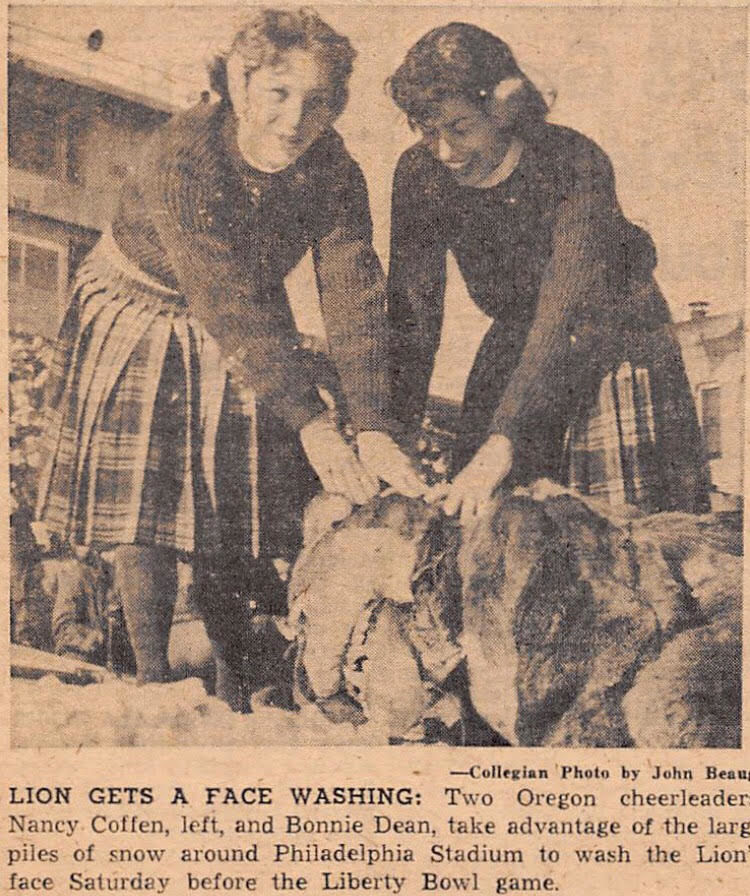 The Nittany Lion stood in the newly constructed Beaver Stadium locker room awaiting his cue to run onto the field and excite the blue and white sea of color.

He was invisible among the focused football players preparing for their own performance on the field. But, he was always seen by then-assistant football coach Joe Paterno.

“They would run out of the locker room, and Joe Paterno would come over to me,” Jack Lesyk, the man who wore the Nittany Lion suit in 1960 and 1961, said. “He would look at my face inside the mouth of the lion and he would tap me on the shoulder, and he would say, ‘I’m glad you’re here.’”

Forty years after Lesyk graduated, he attended a Homecoming dinner where Paterno was the guest speaker. Lesyk told Paterno he remembered their interactions before each game, and Paterno said, “I still do that,” Lesyk recalled.

While the role of the Penn State Nittany Lion mascot has evolved since its original rollout in 1922, the responsibility to inspire Penn State pride has stayed consistent.

Jackie Esposito, a university librarian and coauthor of “The Nittany Lion: An Illustrated Tale,” said the idea behind the mascot came from a baseball game at Princeton University. Princeton was boasting about their Bengal tiger mascot, before a Penn State player spontaneously said the Princeton tiger should watch out for the “Nittany Lion,” which at the time did not exist.

Esposito said she assumes the player was recalling a taxidermy mountain lion in Old Main. The enthusiasm past mascots exude is “absolutely contagious,” she said.

“That’s your primary mission, to excite the crowd and get them behind the team,” Bailey said. “I took the losses as hard as the players did.”

Three former Nittany Lion mascots — Lesyk, Bailey and Michael Valania — have all been a part of Penn State’s history, which is on full display this week for Penn State’s 2018 Homecoming.

The celebration honors the university’s traditions, including the Lion. There’s even the annual “Guard the Lion Shrine” event that features Penn State ROTC students who protect the shrine from defacement by rival universities.

Lesyk’s fraternity brother nominated him to wear the suit during the 1960 and 1961 football seasons. He was chosen after being interviewed by the athletic director in Rec Hall.

“Back in those days, it wasn’t a big deal,” Lesyk said. “We were not gymnasts. We didn’t do acrobatic things.”

By 1975, the application process intensified. Bailey was one of over 40 students interviewed. But when he was selected for the position, it wasn’t the first time he’d encountered the Lion’s suit.

Bailey had received a call from a fraternity brother, Robert Welsh, who happened to be the Nittany Lion from 1973 to 1975. Welsh was unable to attend the pep rally for the Cotton Bowl that night and asked Bailey to fill in with an hour’s notice.

There was a time freshman year when Bailey dreamed about wearing the suit after listening to an interview Welsh gave on the radio.

“I remember very vividly sitting there and thinking, ‘Boy, that would be the greatest job in the world,’” Bailey said. “But that would be a one-in-a-million chance that I would become the Lion.”

As a 6-foot, 135-pound runner with no upper-body strength, Bailey did not think he would meet the criteria to be the Lion. But, he eventually gained more weight and grew stronger.

He worked out with the gymnastics team, and then-coach Gene Wettstone became his lifelong friend who taught him the “little” acrobatics that he did acquire. Although he did not interact with the football team much, Bailey said Paterno would always greet him.

“He made you feel as if you were a part of the team, which he didn’t have to — but he did,” Bailey said.

Bailey said he was expected to perform one-handed pushups on the field — a tradition that continues to this day.

Valania also dreamed of getting dressed as the Nittany Lion. He grew up with Penn State football season tickets and would watch the Lion perform on the field.

He remembers the first time the Nittany Lion took off his head on senior day. Valania knew he wanted to be that person.

Once Valania stepped on campus, he began the mascot application process. His physical tryout included performing a prepared and improvisational skit. He was selected from 2013 to 2015.

While the role didn’t require any gymnastics or dance skills, Valania had to prove he could do 50 one-handed pushups.

Each Nittany Lion had the ability to make the role his own.

Valania said he was passionate about Penn State’s THON, and he worked toward increasing the Lion’s presence at the 46-hour dance marathon. At THON 2015, he even had a dancer number pinned on him as the Lion.

While Valania said wearing the suit could be a lot to balance at times between classes and ROTC, the moments of regret are only brief. Overall, he said he was “over the moon” to have the opportunity.

During his years as the Lion, Valania traveled with the women’s volleyball team to Oklahoma City and Seattle, where Penn State won two national championships. He also shot a commercial with College GameDay, visited Ireland with the football team and once was in the lion suit for 55 hours during Homecoming Week when Pegula Ice Arena opened.

The Nittany Lion has become the latest mascot to be inducted into the Mascot Hall of Fame.

“Maybe you are working a 14-hour day and you are tired, but whether it is your 200th interaction of the day, the person that you are interacting with, it might be their only time that they ever get that close to the Nittany Lion,” Valania said. “So, it has to be as special for them as it was for you the first time you put the suit on.

Memories from Lesyk’s time in the suit have stayed with him, even after 50 years.

At a game against Army, Lesyk was dressed in full costume and posed next to the opposing team’s mascot, a cadet on a real-life mule. As a photographer grabbed a shot, the mule started bucking.

“I was scared to death. I envisioned myself getting trampled to death in this lion costume by this mule. So I ran right across the 50-yard line, across the field into the grandstand, and ran all the way up to the top,” Lesyk said.

When he looked back, the mule hadn’t moved at all.

Bailey has his own favorite memories from his time on the field. He saw a streaker run across Kinnick Stadium, wearing only an Iowa pennet and a baseball cap. The streaker dove into a grassy area before Bailey caught him.

“Good mascots are ones that, I believe, take advantage of certain situations to entertain and excite the fans, so I thought ‘This is great,’” Bailey said. “I ran after him. People were going crazy in the stadium and laughing.”

Once Bailey had jogged to the sidelines, his advisor, Richie Lucas, asked what he was planning to do if he caught the streaker.

“I didn’t actually think that far ahead,” Bailey said with a laugh.

Once a lion, always a lion

Bailey said he loved walking in parades and watching children’s faces light up as he passed by. However, after Lucas ordered a new suit with the head of the Lion snarling, Bailey received the opposite reaction.

Children began screaming and crying at the sight of Bailey in costume.

“It was one of my very first football games as a lion... My heart sunk,” Bailey said.

After three games, Bailey was able to convince Lucas to let him change the head of the Lion.

He became the last student to wear the Nittany Lion costume with a mane on the head.

After graduation, Bailey didn’t expect he would be back in the suit 12 years later. Penn State asked if he would fill in for the Lion at a pep rally at Harrisburg International Airport.

Bailey thought it was a joke. But the Nittany Lion at the time was ill and unable to attend before the Orange Bowl. Bailey agreed to suit up again, and the costume was delivered to his parents’ house.

“To think that I would have the opportunity to wear the suit again was surreal, that's the only way I can describe it,” Bailey said.

It all came back to him — how to be the Nittany Lion and how to motivate the crowd. It really was the “greatest job in the world,” as he had once envisioned.

“It is so unique,” Bailey said. “It’s incredible.”