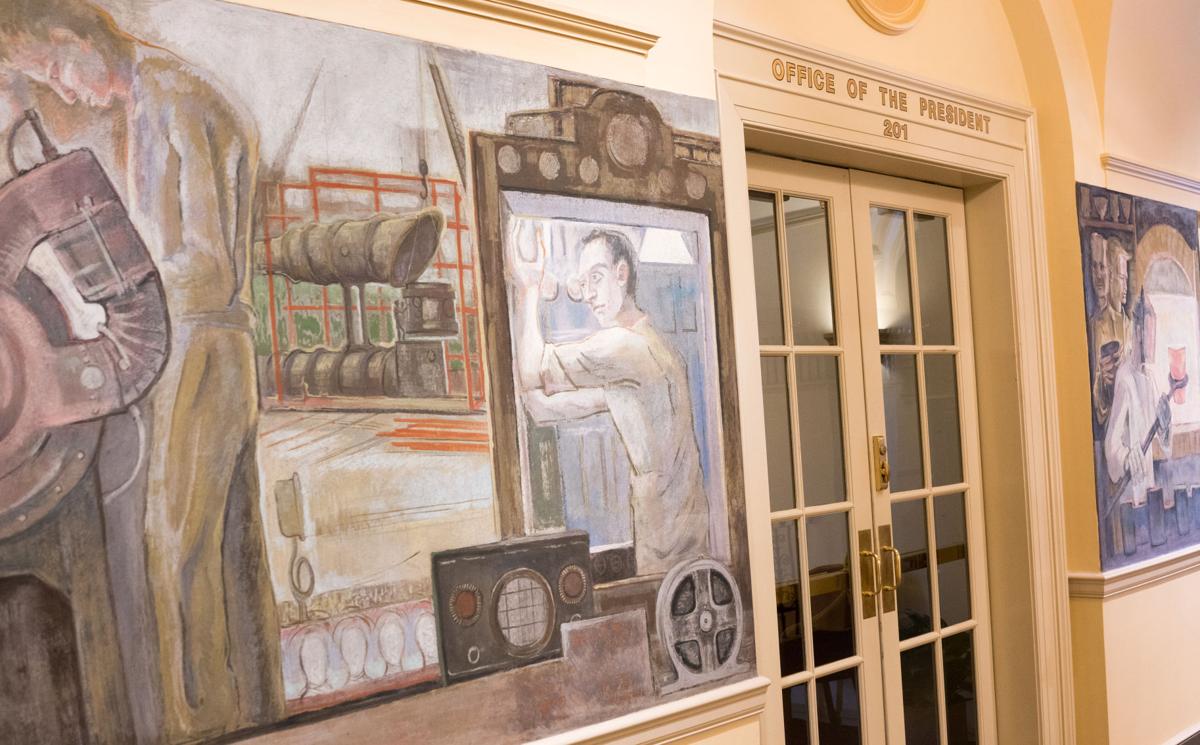 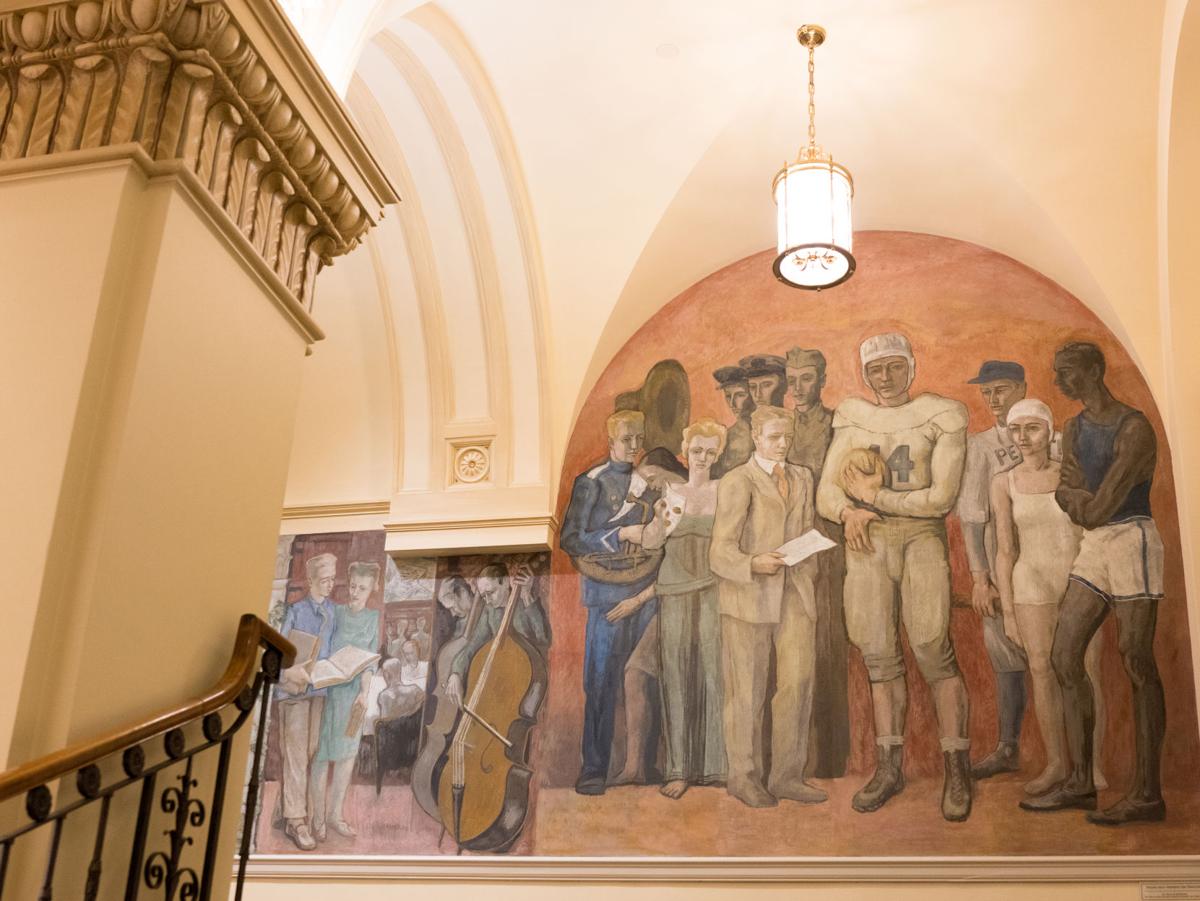 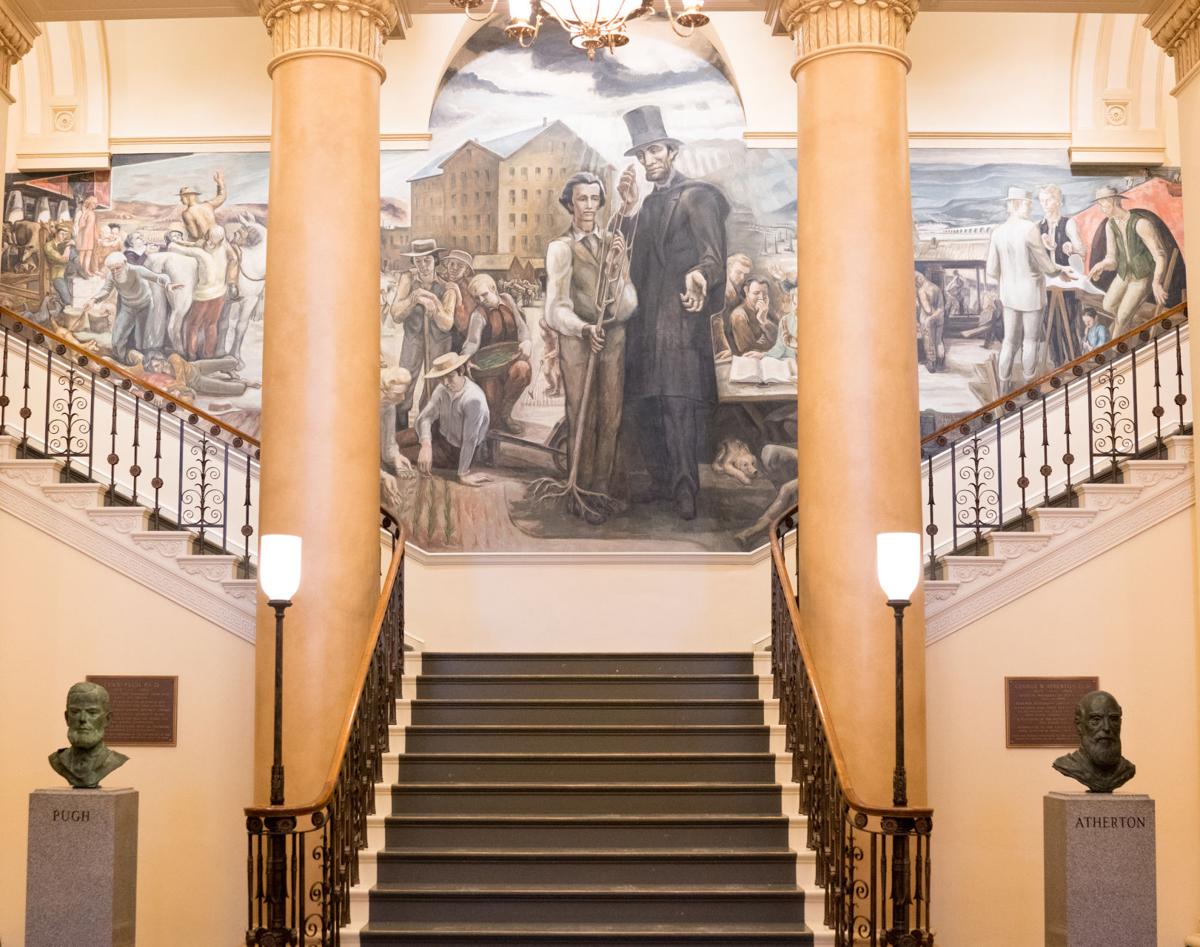 It may come as a surprise to some, but anyone is allowed in Old Main, whether they are a student, faculty or Penn State President Eric Barron.

Once they’re inside, they might be even more surprised by the artwork that covers its walls.

The United States’ 16th president, Abraham Lincoln, is painted on the center wall, greeting those who walk through Old Main’s doors.

Jackie Esposito, a special projects librarian at Penn State, is familiar with the Land-Grant Frescoes’ history.

The Frescoes were completed in three phases in the 1930s and 40s, according to Esposito.

“There was a committee on campus at the time that was very interested in public art,” Esposito said. “The government … was encouraging public spaces to have art … as a way to encourage the economy after the Great Depression.”

During this time, the Nittany Lion Shrine was also conceptualized and created, according to Esposito.

After it was decided that the Land-Grant Frescoes would be painted, Penn State searched for the right artist to depict the university’s history.

Henry Varnum Poor, a well-known muralist from Kansas, was chosen. Esposito said students on campus at the time also helped create the mural.

In the mural, Esposito said that Poor depicted the values and visions that were embedded in the land-grant given to Penn State.

Penn State earned the land-grant through Lincoln’s Morrill Act of 1862, according to Penn State News.

The act was originally set up to establish institutions in each state that would educate people in agriculture, home economics, mechanical arts and various other professions.

“[The Frescoes] were based on the values that are inherent in land-grant education,” Esposito said.

In the center of the mural is Lincoln with a Penn State student. A rainbow can be seen over the student’s shoulder — Esposito said that the rainbow symbolizes a “bright future” for students obtaining a land-grant education.

Each of the panels that cover the rest of the walls communicate a key theme about land-grant education to their audience.

Poor painted men and women taking part in fields of study such as agriculture, engineering and mineral industries. Liberal arts, athletics, home economics and music are also represented in the murals.

Esposito said she appreciates how Poor included women in his murals, as that was not expected in the 1930s.

In addition, a panel is dedicated to key founders in Penn State’s history.

“I think what I like [about the Frescoes] is how they delineate exactly what they believed was going to happen with a land-grant education,” Esposito said. “Each panel tells you that if you study, you can improve the life of a citizen.”

Despite the fact the Frescoes are an iconic piece of our university’s history, they remain underappreciated.

“I think more people should go in and see the Frescoes,” Esposito said. “Once you’ve gone in and seen them, you’ll go see them again because they are really impressive.”

The Land-Grant Frescoes were renovated in 2015, according to Esposito. The restoration brought out the natural colors of the Frescoes, as they had become worn and dirty.

In addition, Mansell created a series of before and after photographs, contrasting the Frescoes when they were initially being painted to their appearance today.

“I like the history of [the Frescoes],” Mansell said.

Several times a year, Penn State’s Lion Ambassadors give tours of Old Main, according to Kate Wenner, the administrative vice president of the Ambassadors.

Wenner (senior-economics and agribusiness management) said the Ambassadors “explain what the Frescoes are, how they originated and what they depict.”

“Not many people know about the Frescoes' history, which is surprising because they are always a big hit in our tours,” Wenner said via email.

In addition to the Frescoes having significance in our university’s history, they are also personally important to Wenner as an agribusiness student.

“As a student in the College of Agricultural Sciences at Penn State, I do not once take for granted the opportunities I, and other students at Penn State, are given through [the Morrill Act],” Wenner said.

So next time you walk past Old Main, stop in and check out the Frescoes. They artistically embody the university’s rich history.