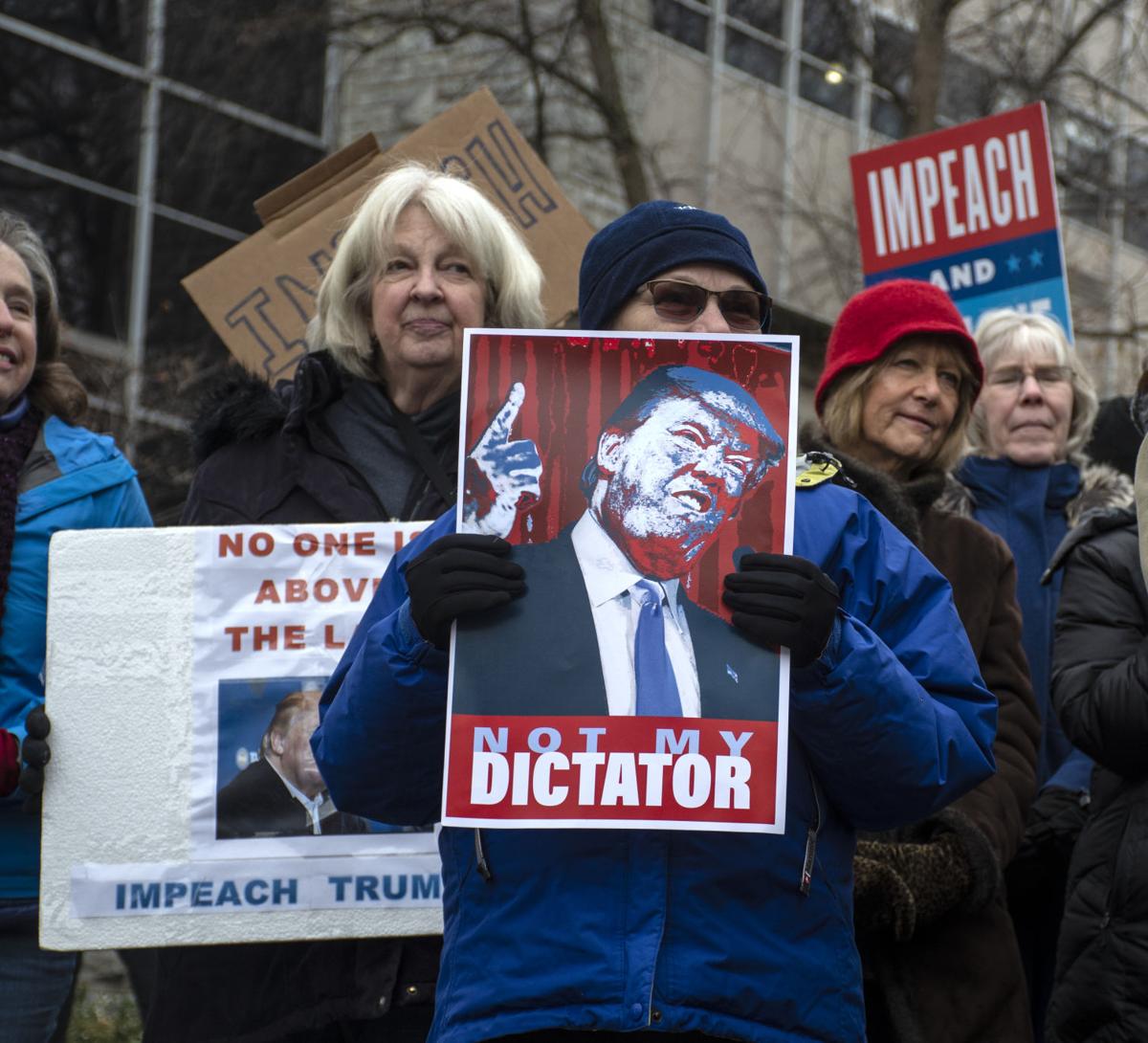 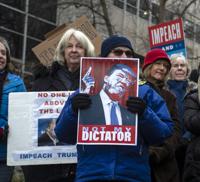 Linda Westrick, of State College, Pa., stands with a "Not my dictator" sign at a Trump Impeachment Rally at the Allen Street Gates on Dec. 16, 2019. 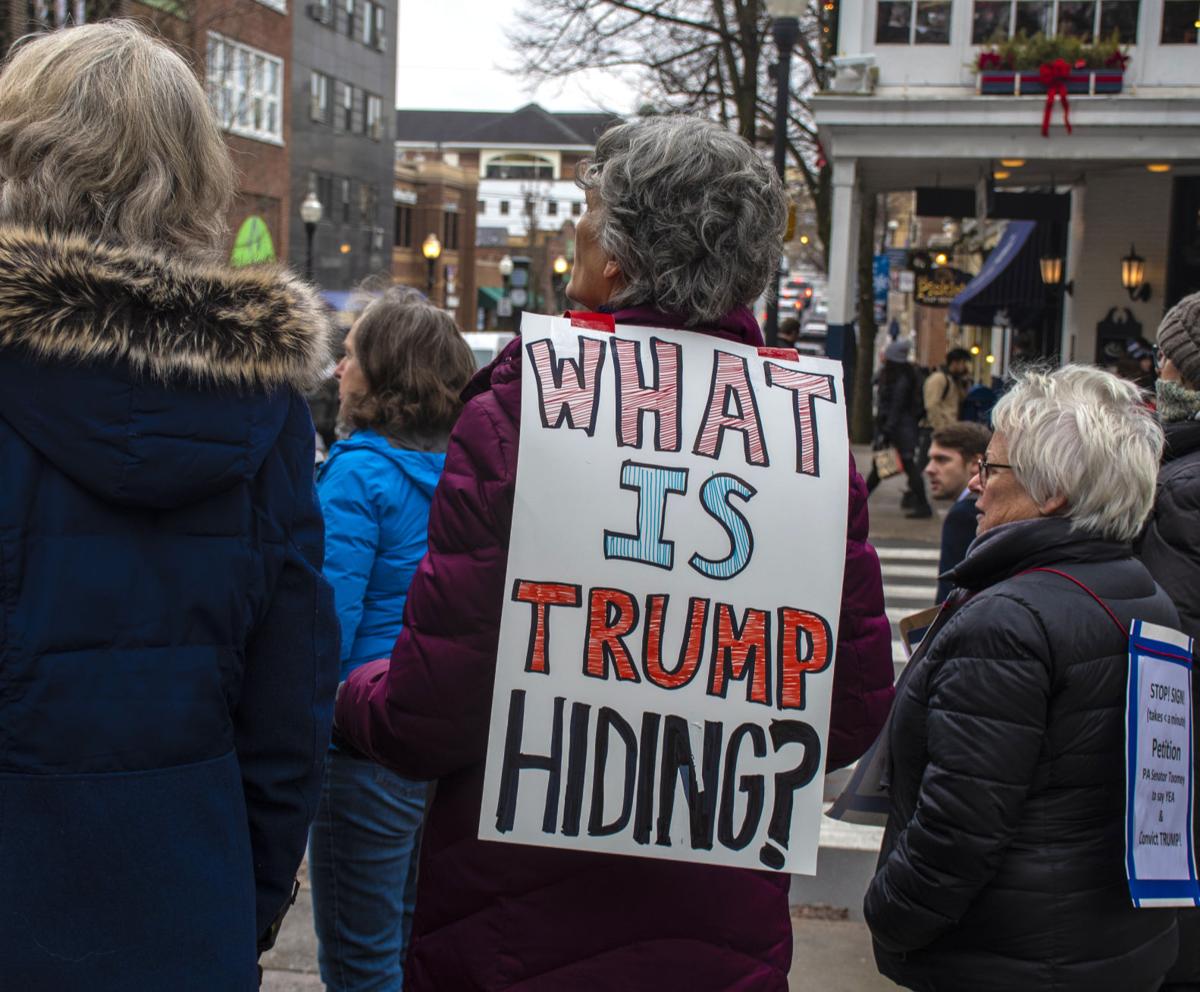 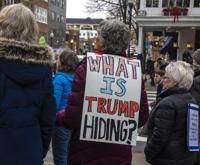 Connie Schulz, of State College, Pa., stands with a "What is Trump hiding?" sign on her back at a Trump Impeachment Rally at the Allen Street Gates on Dec. 16, 2019. 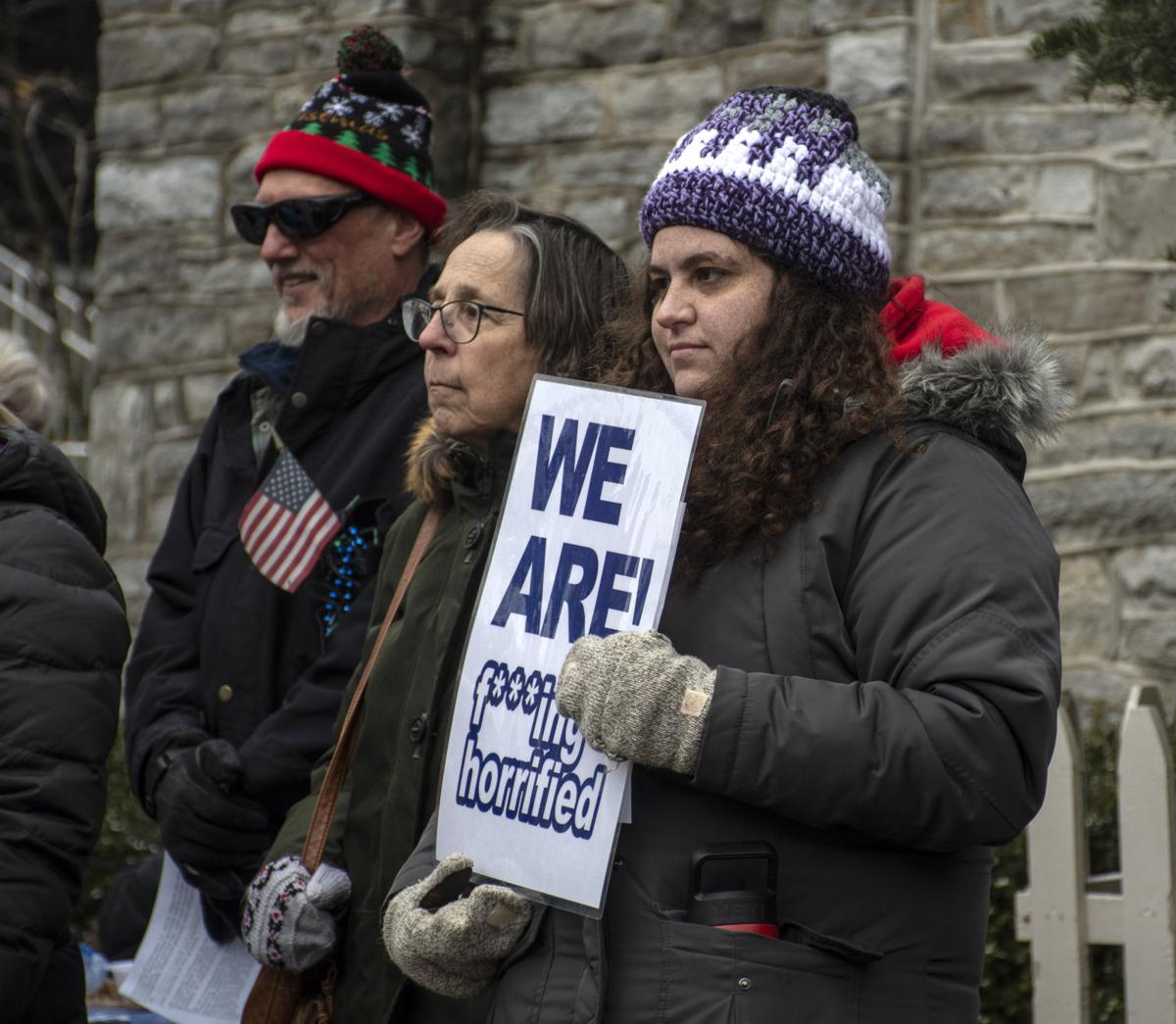 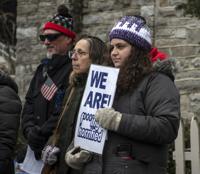 Jess Maggio, of State College, Pa., stands with a "We are f***ing horrified" sign  at a Trump Impeachment Rally at the Allen Street Gates on Dec. 16, 2019. 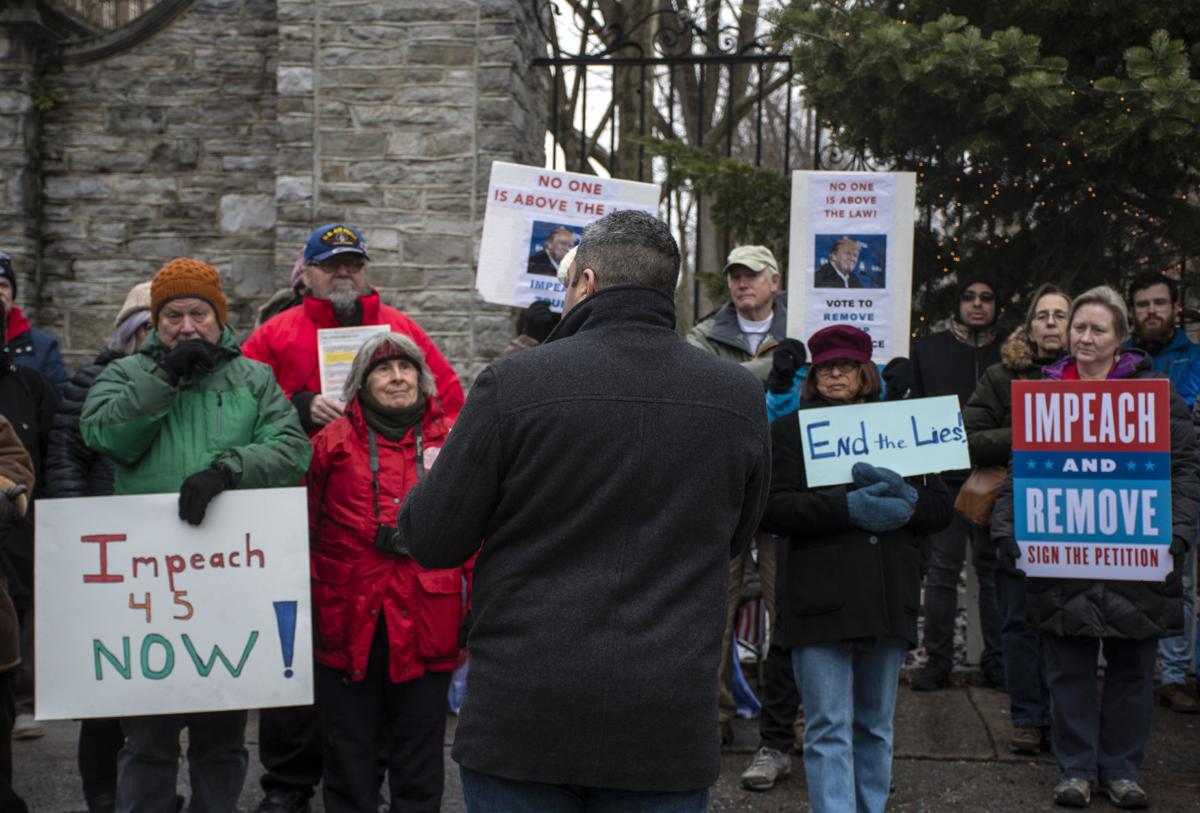 Penn State IST professor and former Democratic candidate Marc Friedenberg speaks to a crowd of protesters at a Trump Impeachment Rally at the Allen Street Gates on Dec. 16, 2019. 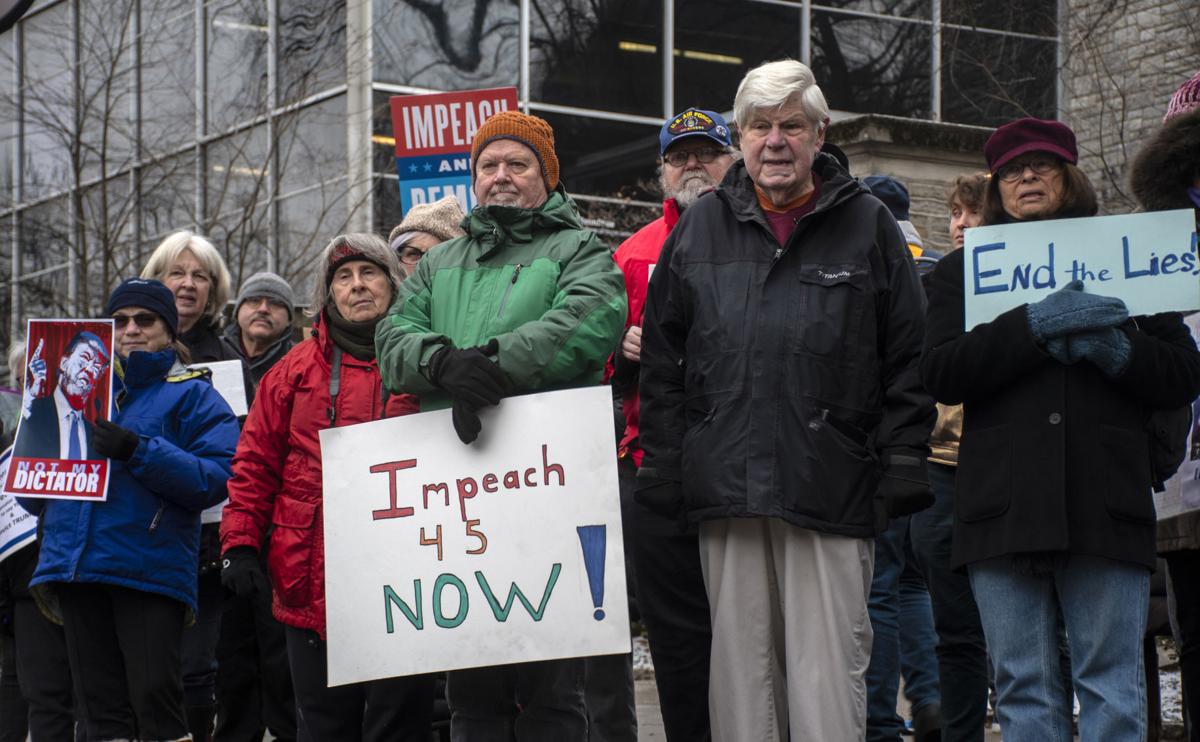 State College Borough Councilman Jesse Barlow holds a "Impeach 45 now!" sign among other protesters at a Trump Impeachment Rally at the Allen Street Gates on Dec. 16, 2019.

On Monday afternoon, protesters gathered at the Allen Street Gates to urge Congress to vote for articles of impeachment against President Donald Trump.

The articles are expected to be voted on the House of Representatives floor this week.

Marc Friedenberg, the former Democratic nominee for the Pennsylvania’s 12th District and an information sciences and technology professor, called for community members and students to rally on his Twitter account on Sunday.

Friedenberg, among other community members, spoke at the protest about the content of the two articles of impeachment against Trump — abuse of power and obstruction of Congress.

“He has placed his personal and political interests above our national security, our free and fair elections, and our system of checks and balances,” Friedenberg said. “This will continue if left unchecked... President Trump should be impeached and removed from office.”

He continued to voice his concerns about the 2020 presidential election given recent developments in Trump allegedly requesting quid pro quo cooperation from Ukrainian President Volodymyr Zelensky in an investigation into Democratic presidential candidate Joe Biden and his son.

“Beyond this basic impeachable conduct, there are two aggrevating factors: when President Trump asks President Zelensky for a favor, he did so at the expense of our national security and the integrity of our elections,” Friedenberg said. “When the president weakens a partner… he weakens America. American elections should be for Americans only.”

Local government officials, including State College Borough Councilman Jesse Barlow, were present at the protest. Some spoke their thoughts on the impeachment proceedings.

“I’ve seen all three of four impeachments during my lifetime, and this guy did worse things than any of the others, and did worse things maybe even than Andrew Johnson,” Barlow said. “Speaking for myself, I cannot believe this awful man and I find this unbelievable.”

Among the crowd of protesters holding signs included Penn State students and graduates who felt it was their civic duty to protest Trump and his actions during his presidential term. Student Charles Tierney said he felt “incredibly encouraged” by the turn out of the protest.

“I’d like to reenforce… that in the scenario that Donald Trump is impeached, that it can’t begin and end with that impeachment,” Tierney (graduate-aerospace engineering) said. “Donald Trump, I don’t believe, is an aberration. I think he is the logical conclusion of political project that has been in the process for 40 years.”

Tierney ended his speech by encouraging protesters to hold their elected officials accountable.

“I hope that moving into 2020 and beyond, that we continue to put the heat on our elected officials to work for us and to ensure justice in all aspects of life for all Americans,” Tierney said.

Longtime Allen Street Gate protester and 2016 Penn State graduate Jess Maggio expressed her hopes for how this protest will impact impeachment proceedings and her discontent with how long it took to organize a protest surrounding this topic.

“We have to keep the community reinvigorated with the spirit of democracy,” Maggio said. “We can’t have a one and done [protest] and feel good that you did something. We need to keep up the momentum and energy to make sure that we sustain that level of enthusiasm toward getting things done.”

Maggio also urged students to be more involved with protests on campus rather than bypassing and questioning the event later.

“Call a senator, go out and vote and if you see events happening around campus, ask about it and join in,” Maggio said.

Maggio said that the protest will continue at the Allen Street Gates at 5:30 p.m. on Tuesday. She hopes for more student involvement.

Ashley Hayford is a crime and courts reporter at The Daily Collegian. She is a junior studying digital and print journalism with a minor in political science.