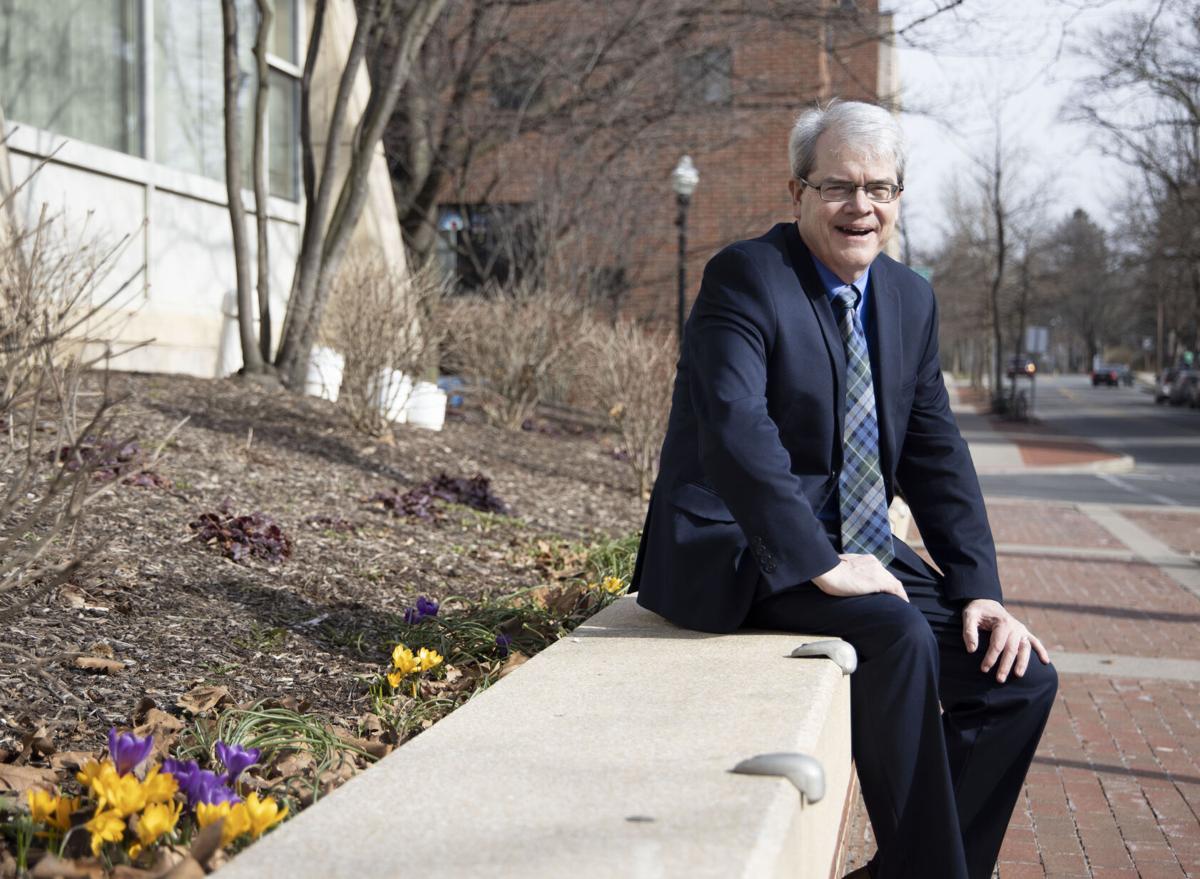 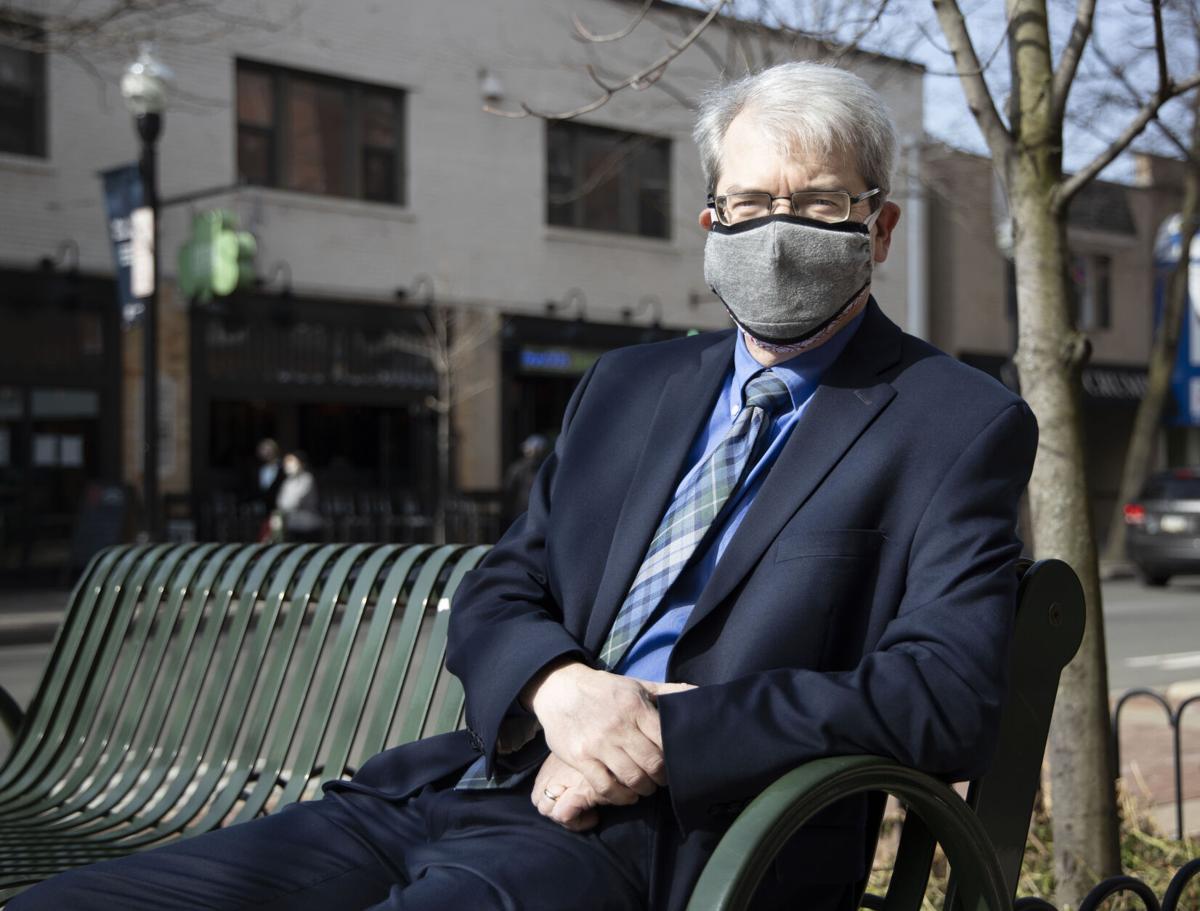 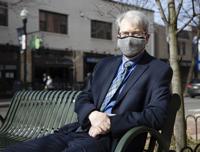 Jim Leous, one State College’s mayoral candidates, poses on a bench on Beaver Avenue in downtown State College on Wednesday, March, 17, 2021. Leous, a borough resident since 1986, is currently serving his third term on the State College School Board.

Jim Leous took the ballot as a State College mayoral candidate March 9 after being the second candidate to announce his campaign — after Ezra Nanes.

However, this is not Leous’ first time running for local office. He successfully campaigned to earn his spot on the State College Area School Board and is currently serving his fourth term.

Along with the school board, Leous has worked for Penn State as the co-chair of the Information Technology Services version of IT Architects in Academia for over 10 years. Before this position, he worked as a manager and research programmer for Penn State’s IT department.

Currently, Leous serves on the finance and communication committee within the school board. Additionally, he’s the adviser for Penn State’s College Democrats and said he was inspired through the students to run for mayor.

“Students will always focus on whether it’s a presidential election year, but every year is an election year,” Leous said. “In most cases, how you’re treated depends a lot more on your local judges and district attorneys than necessarily who’s president.”

Initially, he started in local politics through the school board in 2009. He said he was “encouraged by members of the community to run for the school board” because of his involvement with his two children in the State College Area School District.

In 2014, his school board subcommittee worked on the referendum for an $85 million bond for the State High School renovations project. Leous said he was only planning on serving two terms on the school board but chose to stay to see the project to its completion.

“The community really came together for it, and it was apparent that I had to stay to finish these projects, which led me to run for a third term,” Leous said.

Leous, along with the board, was able to open five different school buildings by 2017.

“We have been working very well with each other on subcommittees for school board projects,” Hutchinson said. “His real expertise is in the technology appeal and it’s really nice working with someone who knows what they’re talking about in that respect.”

Aside from his work at Penn State and the school board, Leous has also coached the State High’s ice hockey team.

Andrew Wilson, a teacher at State High, coached with Leous for over a decade.

“He is always positive and full of energy as a coach,” Wilson said. “No matter who or what we were up against — whether coaching or playing — he was always looking for the good in situations we were confronted with.”

Engaging in the community has enabled him to learn a lot about the borough of State College, according to Leous. These experiences inspired his decision to run for mayor — more so because of the pandemic, he said.

“One of the reasons I got into government is because I see government as a force for good, and I see how it can help people” Leous said. “It’s been really brought home during this pandemic.”

Over the past few months, Leous has overseen various projects — such as vaccination clinics at the Mount Nittany Middle School and ensuring students can get meals from the high school during the pandemic.

According to Leous, his goal is to “bring life back to State College” after the pandemic. He said he believes the municipality has been “hit” because of tax deductions and lack of tourism.

“It’s not going to all get solved once everyone is vaccinated,” Leous said. “It will take at least a two-year process since we need to get out of the deficit spending that the pandemic has required us to do due to the lost revenue.”

One of Leous’ short-term goals will be helping local businesses after the pandemic subsides.

“My immediate goal is to help the borough any way I can to get out of the pandemic to encourage businesses to get back on their feet and replace the ones that were closed downtown,” Leous said. “We need some more diverse businesses downtown that are not so dependent on the travel and hospitality industry.”

Additionally, Leous said he wants to engage the “transient” population in the community, such as students and assistant professors, who don’t stay in the area long-term.

“Part of my job as mayor would be to make this community as welcoming as possible for everyone that is here,” Leous said. “I want to make the years they spend — either living downtown as a resident or being a student on campus — some of the most enjoyable of their life so they will want to come back here to visit in the future.”

Leous said he believes he can “do more for the community” as mayor rather than returning to the school board for a fifth term.

“I want to be a part of the solution for the borough,” Leous said. “I know the borough needs me more than the school board does right now.”

The primary elections for State College mayor will take place May 18.

Black churches have been impacting central Pennsylvania for years — offering various services and benefits to the Black community around the area.

Phoebe Cykosky is a borough reporter at The Daily Collegian. She is a sophomore majoring in criminology and English.