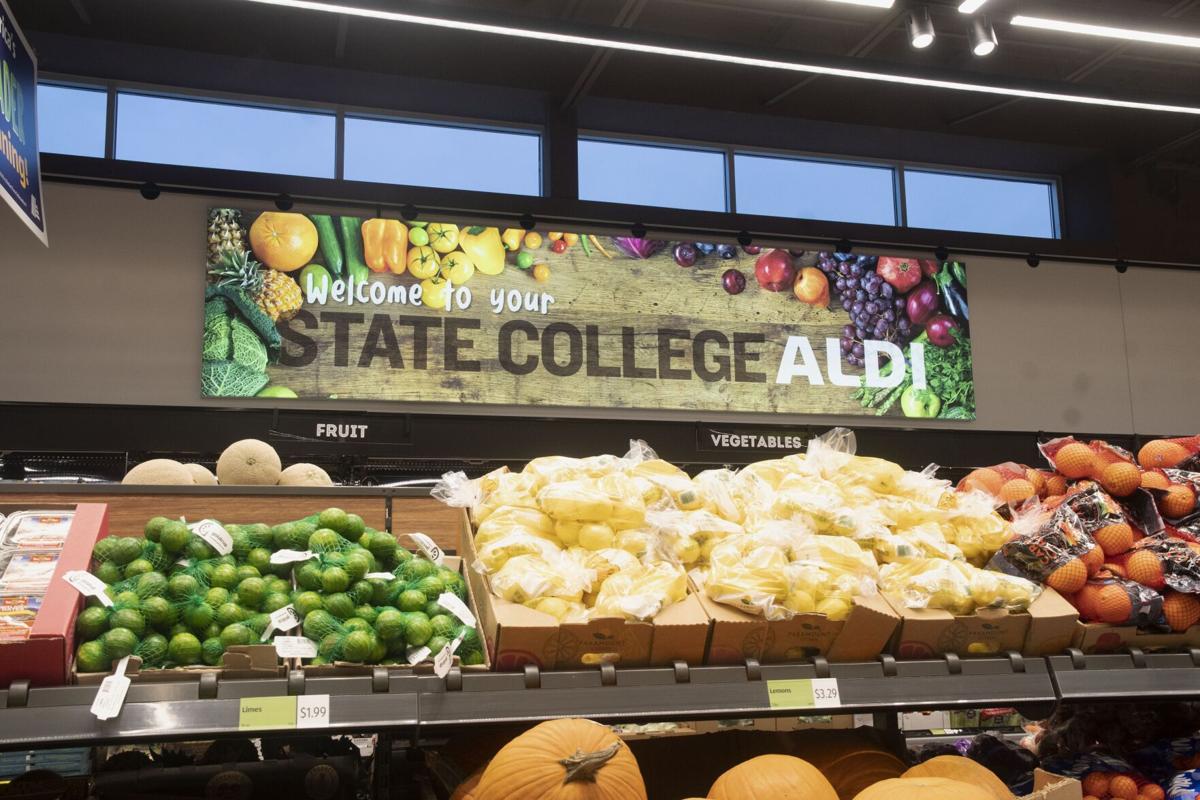 An ALDI's welcome sign hangs above a display of fresh produce on Wednesday, Oct. 27, 2021. The new store, located on North Atherton Street, is set to have its grand opening Thursday, Oct. 28, 2021. 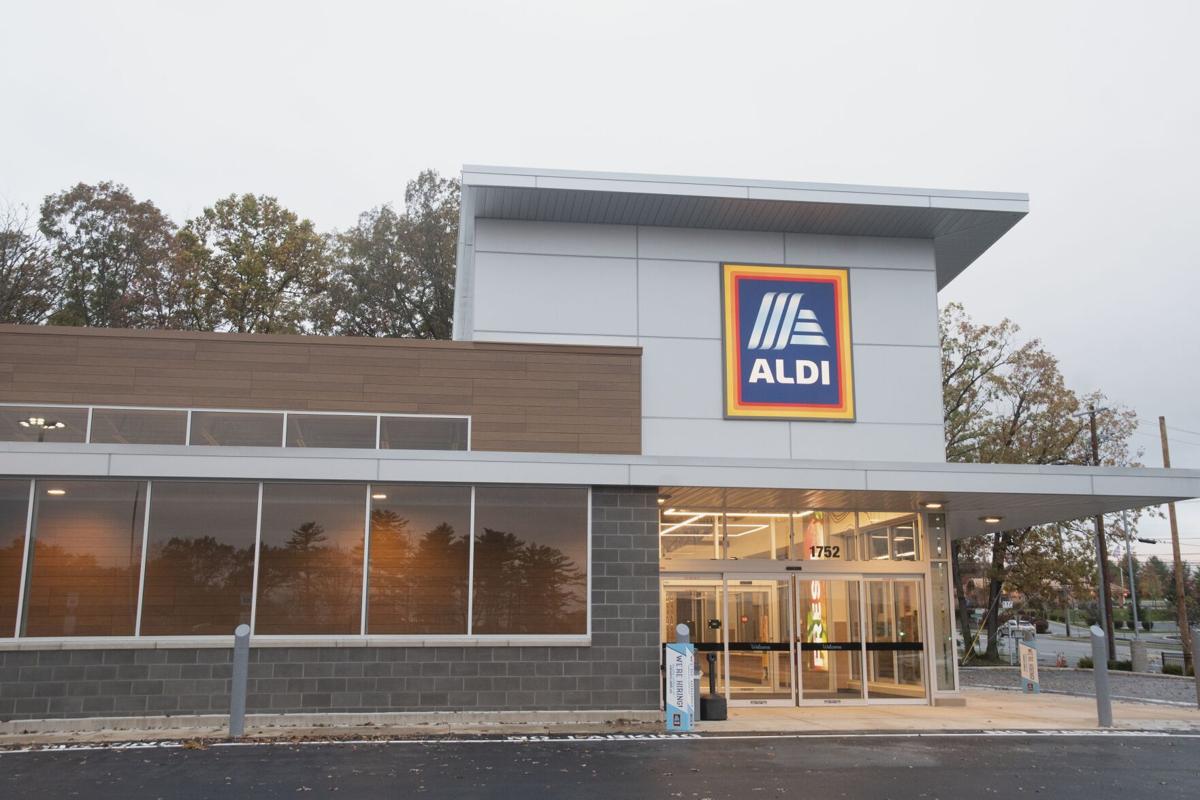 With over 35 grocery store options in the State College area, Penn Staters and local families have a variety of places to choose from — and now, another store has been added to the mix.

Director of Operations at the State College location Lacy Bailiff said ALDI’s ideals are “centered around ensuring that we provide the best quality product at the lowest price every day.”

The corporation is working on a national expansion, Bailiff said, and there wasn’t a State College area ALDI previously.

“We really wanted to reach as many customers as possible,” Bailiff said. “We recognized that there was a void in this direction.”

Before the North Atherton ALDI opened, the nearest ALDI store was located in Burnham, Pennsylvania — about 30 minutes from State College.

As a mother of two young daughters in the State College area, Benita Moritz said she was prepared for the new ALDI store because “it’s been a long time coming.”

Moritz and her daughters arrived on the morning of the grand opening.

Before living in State College, Moritz said she frequently visited ALDI chains when residing in Minnesota and Australia.

“I tend to look for a balance between quality and price,” Moritz said. “If the quality is the same compared to the generic name brand, I’ll buy the generic brand.”

Bailiff said ALDI emphasizes “providing the best quality products at the lowest price,” and one in every three ALDI’s products have won “an award in their respective category that it falls into.”

“We do carry some brand names,” Bailiff said. “We recognize that some people have name brand loyalty for certain commodities.”

Throughout the store, ALDI placed some of the brand named items next to ALDI brand products, showing the lower price points of ALDI products.

Moritz said because she has a “routine at other grocery stores,” she won’t complete all of her shopping at ALDI but plans to continue scoping out the State College location.

“I definitely will be shopping here and seeing what all this store has,” Moritz said. “We’ve all been waiting so long for it to open.”

Amanda Gryskevicz and Amira El-Dinary said they are happy to have an ALDI and said they expect the store will do well because of its proximity to University Park.

Gryskevicz (junior-psychology) said she normally shops at ALDI when at her home in Erie.

Since coming back to school, Gryskevicz said she’s been comparing her grocery lists from Trader Joe’s and GIANT Food Stores versus what she would spend at ALDI.

Gryskevicz said she’s been searching for an ALDI in the area since she first arrived on campus as a freshman.

“I've been waiting to do my main grocery shopping here,” Gryskevicz said. “I'm the most enthusiastic person about this.”

As a college student, Gryskevicz said she likes to try and save money whenever she can. At ALDI, her grocery bill ends up being around $30 each week compared to the $50 to $60 she spends elsewhere.

While Gryskevicz said she plans to do her main grocery shopping at ALDI, her friend El-Dinary (junior-communication sciences and disorders) said she had only been to ALDI once.

Coming from Maryland, El-Dinary said she went to ALDI for the first time in high school.

“It was really nice because we got to get a lot of things at once, and it was really cheap,” El-Dinary said.

El-Dinary said she could see herself getting “the basics” at ALDI, but she likes the “unique items” from Trader Joe’s.

According to Bailiff, ALDI has been trying to implement more grab-and-go and seasonal items for a low price — similar to Trader Joe’s.

“We recognize now more than ever that it's so important to be able to keep a grocery cart as full as it's ever been but not hit somebody's wallet,” Bailiff said. “And you know, these are tough times — that’s our commitment.”

The seasonal items are located near the front of the store under the “here-today-gone-tomorrow” endcap, while grab-and-go items are throughout the store.

Additionally, as a vegan, El-Dinary said she likes Trader Joe’s for its vegan options. She said she was unable to find vegan butter at ALDI, which is an essential for her.

El-Dinary said she wasn’t completely disappointed because of ALDI’s variety of milk alternatives.

Bailiff said ALDI offers “a ton of organic and gluten-free options,” and the company is working on “expanding into keto products.”

ALDI prides itself on having “an environmentally conscious mindset” while rebuilding its stores, which includes LED lighting, sustainable refrigerants, energy efficient HVAC and more, which El-Dinary said is another plus.

The temporary hours of the new location are 9 a.m. to 8 p.m.

ALDI will be open from 8:30 a.m. to 9 a.m. for “vulnerable” shoppers in relation to the coronavirus pandemic.

A second ALDI location will open next year on the former Krentzman Supply property at the corner of Benner Pike and Shiloh Road, according to Bailiff.

For now, one State College location is satisfying the needs of some community members and students — inspiring some to even change their daily routines.

“We're just happy to be here,” Gryskevicz said. “We love it — we woke up early for this.”

The State Theatre in downtown State College announced it will host Lotus Land at 8 p.m. Nov. 20.

Students share which Penn State buildings give them the ‘heebie-jeebies’

Halloween may be over, but for Penn State, the campus has no lack of old buildings that can give students the creeps — no matter what time of …

The Rivet at Discovery Space, located at 1224 N. Atherton St., will host its second annual Winter Market from 11 a.m. to 7 p.m. on Saturday an…