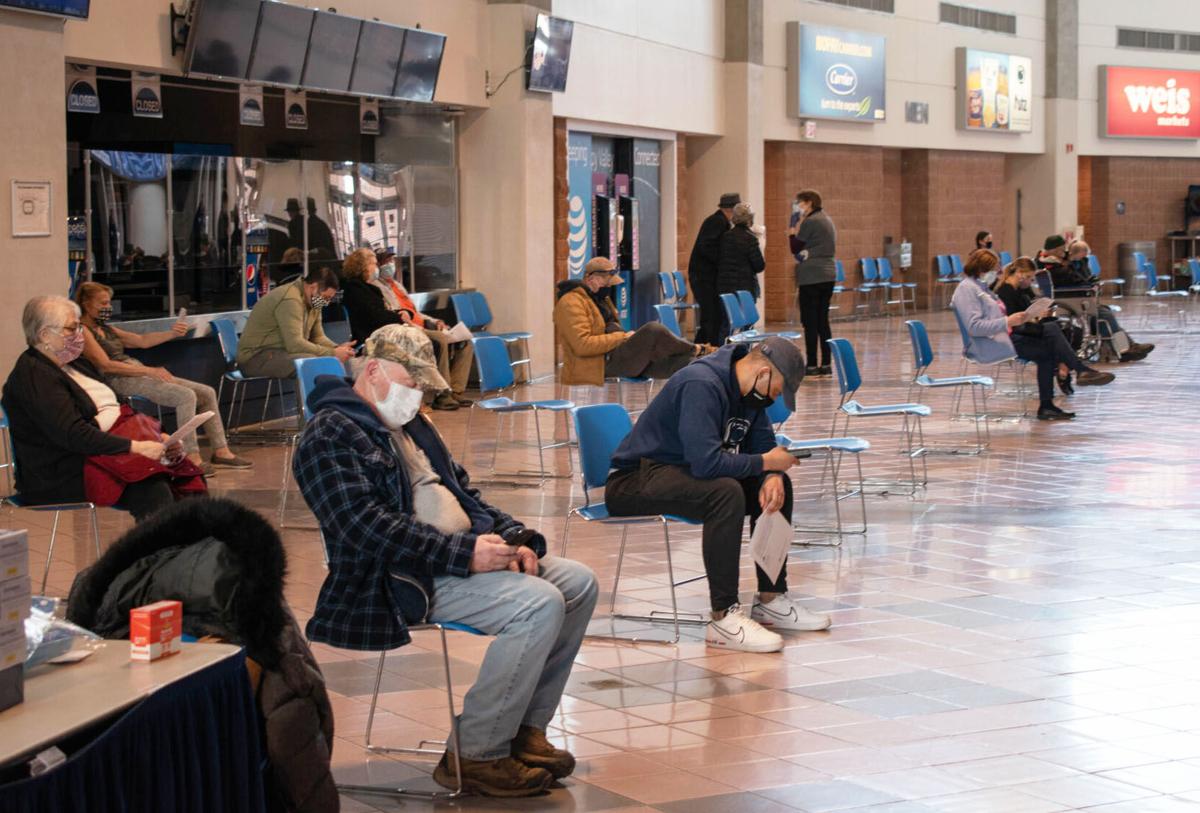 People waiting to leave after receiving the coronavirus vaccine on Monday, March 15, 2021, in the Bryce Jordan Center, in University Park, Pa. 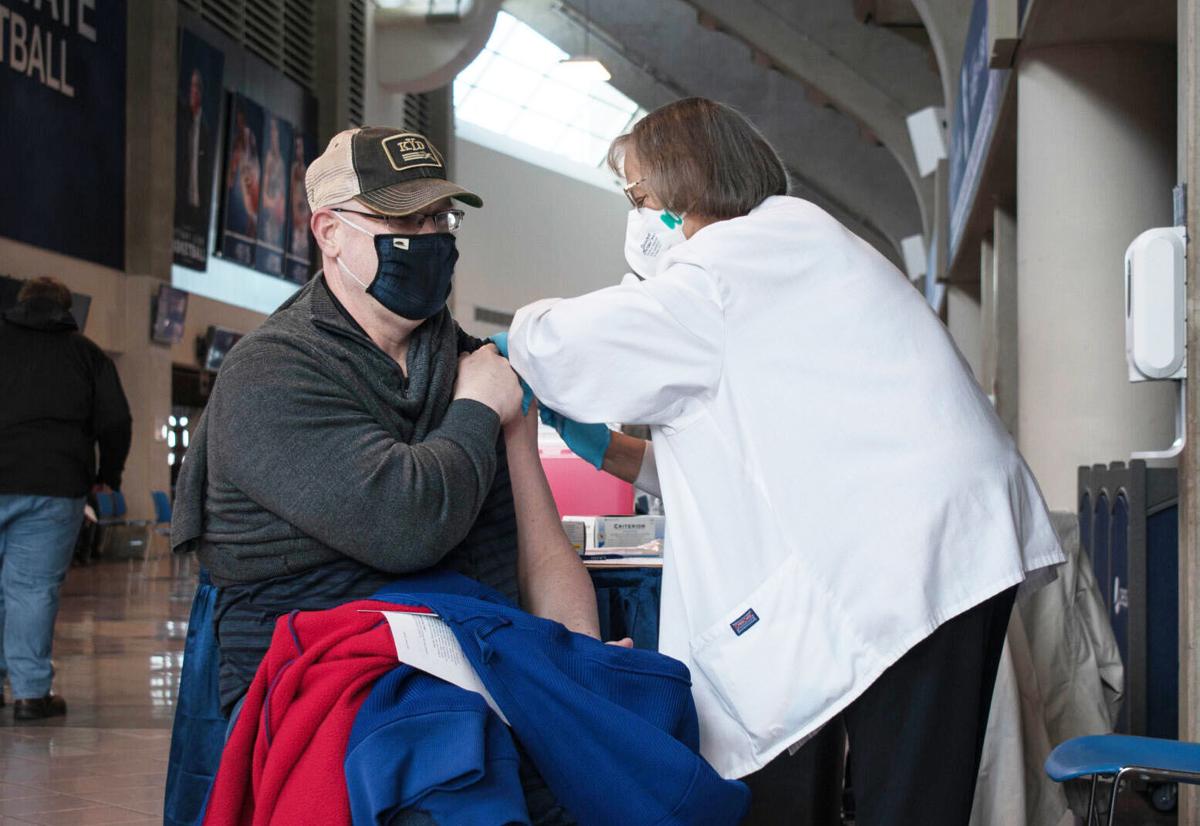 Gregory Drake, of State College, receives a dose of the coronavirus vaccine on Monday, March 15, 2021, at the Bryce Jordan Center in University Park, Pa. 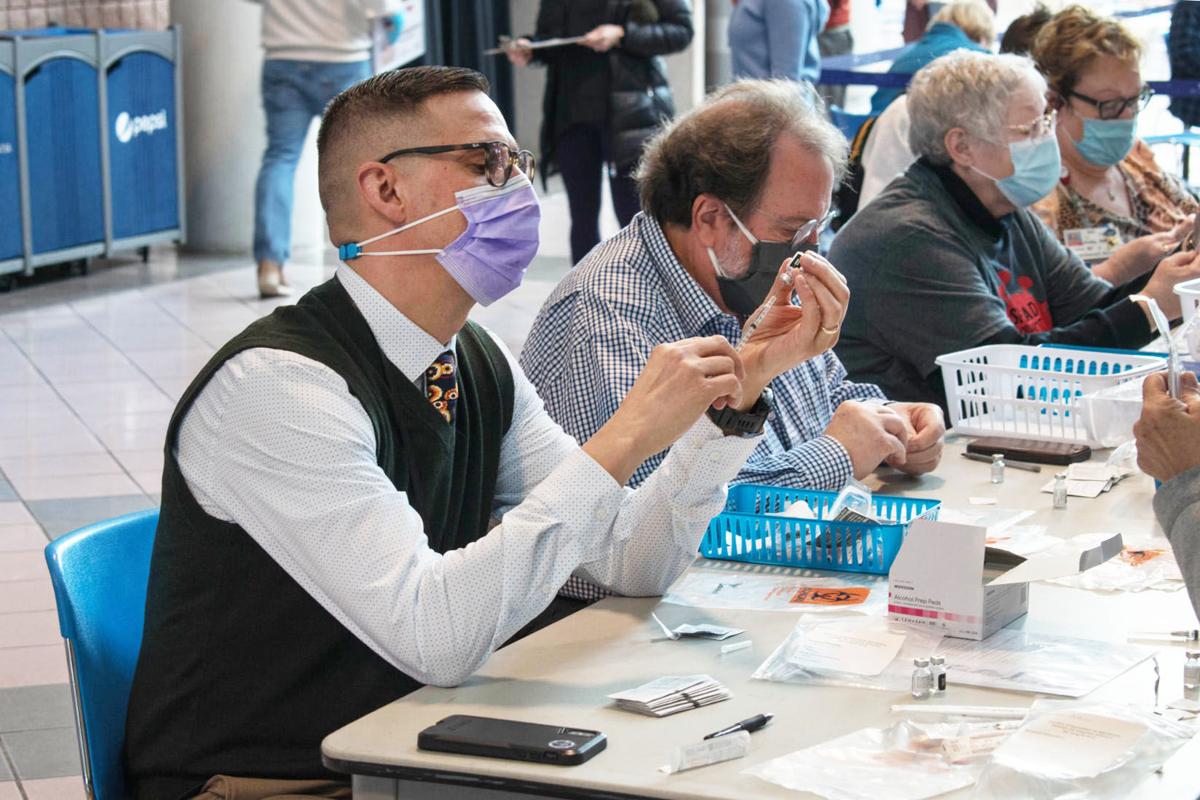 Dr. Mark Stephens, a doctor of medicine in State College, Pa, prepares a dose of the coronavirus vaccine on Monday, March 15, 2021, at the Bryce Jordan Center in University Park, Pa.

A little over one year after the first coronavirus case was reported in Centre County, a more infectious variant has arrived in the Centre region.

The B.1.1.7 variant, also referred to as the United Kingdom variant, was first discovered at Penn State in tested wastewater samples and was confirmed in a “COVID-19 Status Update” with university officials and community leaders on March 26.

According to Matthew Ferrari, director of Penn State’s Center for Infectious Disease Dynamics and associate professor of biology, the analysis of wastewater samples was ordered after the increase of cases locally.

“I think myself and others at the university working to set policy were already operating under the presumption that [the variant] was here almost as soon as it was detected in [Pennsylvania],” Ferrari said. “It was just a matter of time.”

The variant was first discovered in Pennsylvania on Jan. 7, and while it is still unknown how widespread it is in State College, the wastewater sample that confirmed its presence dates back to March 7, according to Ferrari.

Wastewater sampling for the coronavirus on campus and in surrounding areas can help the university catch a potential outbreak days before those in contact with the virus show any symptoms, according to Ferrari, who said it would be no surprise if the U.K. variant continued to spread throughout the community.

“The highly transmissible variant is about 30-50% more transmissible than the original virus,” Ferrari said. “While young people still have a low probability of reacting severely to the virus, with this variant, that low value is slightly higher.”

State College Mayor Ron Filippelli said with the increase in cases, large student gatherings and parties are still an issue even with the borough’s existing coronavirus ordinance.

“Of course not all of the blame is on students,” Filippelli said. “However, it's gotten to a point where we already have consequences in place, but we can’t control everything, especially when it comes to apartment and private housing parties where students live.”

Filippelli said he continues encouraging social distancing and mask wearing but is concerned about what it means to have a variant discovered in the State College community.

“After over a year of this, it just goes to show that there’s still a long way to go before we can reach this ‘normalcy’ we all crave,” Filippelli said. “I think I speak for everyone when I say we are worn out. But, a variant is not. It's just getting started, and that’s the real concern.”

Ferrari said there has already been “strong evidence” that the variant spreads rapidly, and he stressed the importance of recognizing the “increased likelihood” of developing severe, potentially long-lasting effects from the variant.

“I want to be as transparent as possible,” Ferrari said. “It’s still so new that we don’t know how long lasting those outcomes could become. But if you do get sick with the variant, the chance you might have those long term issues of fatigue, scarring in the lungs and respiratory failure is increased and all very possible.”

According to the Centers for Disease Control and Prevention, the B.1.1.7 variant has become the most common strain of the coronavirus in the United States as of April 7.

Currently, all three coronavirus vaccines available in the United States — Moderna, Pfizer-BioNTech and Johnson & Johnson — work against the variant, according to Ferrari.

“All vaccines have been very effective,” Ferrari said. “But, we must remain conscientious that other variants tell a different story and have not yet been detected in our community.”

According to the CDC, the two other coronavirus variants already present in the U.S. are the B.1.351 from South Africa and P.1. from Brazil.

Like Ferrari, Filippelli said the real concern is making sure other variants do not spread.

“It is critically important to reach herd immunity,” Filippelli said. “Now that vaccinations will be available to so many members of our community, we must act on that advantage and understand we must continue to follow guidelines until everyone can be [vaccinated].”

In Centre County, 18% of the population has been vaccinated as of April 5, according to the CDC’s COVID-19 Data Tracker.

Ferrari said if students are vaccinated, there is room to relax some restrictions. But he said now is still the most important time to stay cautious.

According to the Pennsylvania Department of Health’s vaccine rollout timeline, all commonwealth residents will be eligible for vaccination by April 19.

“We now know that there is absolutely a way to protect people from the virus with vaccines,” Ferrari said. “But we need to be patient in order to buy everyone the time to get the vaccine before we can think about normalcy and what that actually means.”

Although more vaccines are being distributed and some restrictions have been relaxed, Ferrari said the need to continue practicing preventative measures — including masking, distancing, frequent hand washing and avoiding large gatherings — is still “undeniably necessary.”

Maciej Boni, an assistant professor of biology at Penn State, said it was “bad luck” the variant spread when vaccinations started to become readily available to the general public.

“I don’t think anyone expected it to be something we had to take so seriously so soon,” Boni said. “It was bad luck. Now, it's the next race everyone is watching — the race between vaccinations and variants and which one will get to communities like ours quicker.”

Boni said while the vaccine does protect against the B.1.1.7 variant, that efficacy is not at the same level when it comes to facing other variants.

“As more variants continue to spread, even vaccinated people will have to take common precautions over the next couple of years,” Boni said. “We can’t solve this problem in the next year or two, but that doesn't mean it has to be a crisis.”

Boni also said more cases could lead to worse outcomes, especially when it comes to hospitalizations.

According to Mount Nittany Medical Center’s weekly coronavirus update on April 2, the hospital currently has 25 coronavirus positive patients aged 28 to 90.

“As community cases continue to rise, so do COVID-related hospitalizations,” the update said. “In the second half of March alone, 72 people were hospitalized due to COVID-19.”

Ferrari said the concern in the coming weeks is to prevent a fourth wave of cases from surging throughout the university and neighboring communities that would add to the pressure already felt in hospitals like Mount Nittany.

“When we see light at the end of the tunnel, there is a tendency to let your guard down and relax restrictions too early,” Ferrari said. “Everyone is tired, but it is not the time to open the flood gates now and cause that fourth wave, or even an outbreak following the discovery of this variant and have people get sick and die when we could have protected them.”

Like Ferrari, Boni stressed the importance of smart decision-making now rather than later. However, Boni said he expects vaccinations to be the new normal over the next five years.

“Because I presume outbreaks are already happening on campus, I think we all have to be aware that that is being seen at a national level as well,” Boni said.

Boni said young people — like college students — “suffer mildly or differently” than other people, so “serious public communications” on coronavirus regulations should continue at the university.

As the university expects to be fully back on campus and in person in the fall, Ferrari said it is “imperative” to follow all university health guidelines as more studies of the variant are discovered.

“If we can just hold on for a little while longer, that patience will be rewarded,” Ferrari said. “What we can’t do is revert back to old habits while we have the chance to save so many lives. If we can just do that, we will all be able to reap from those rewards.”