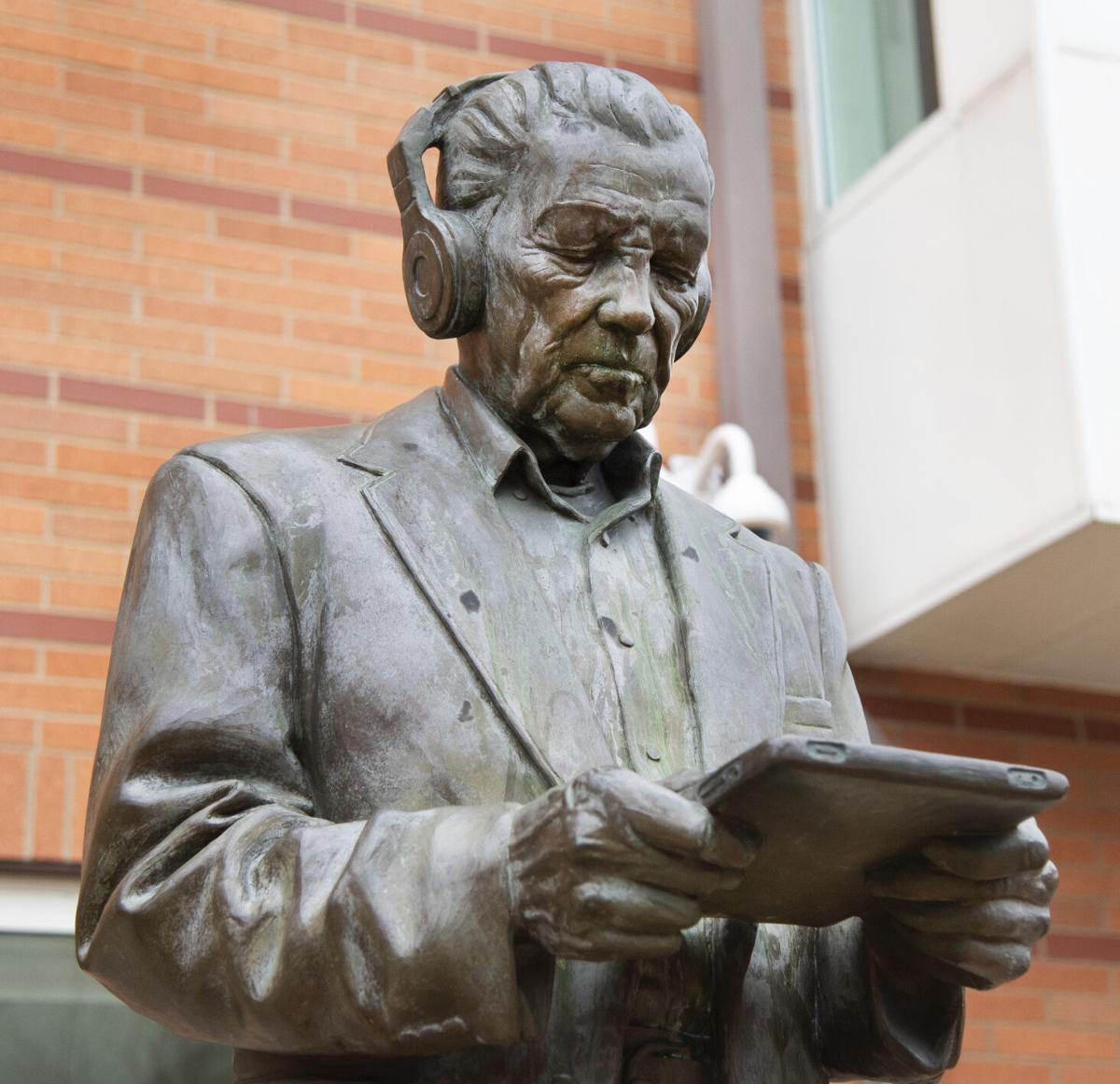 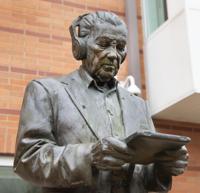 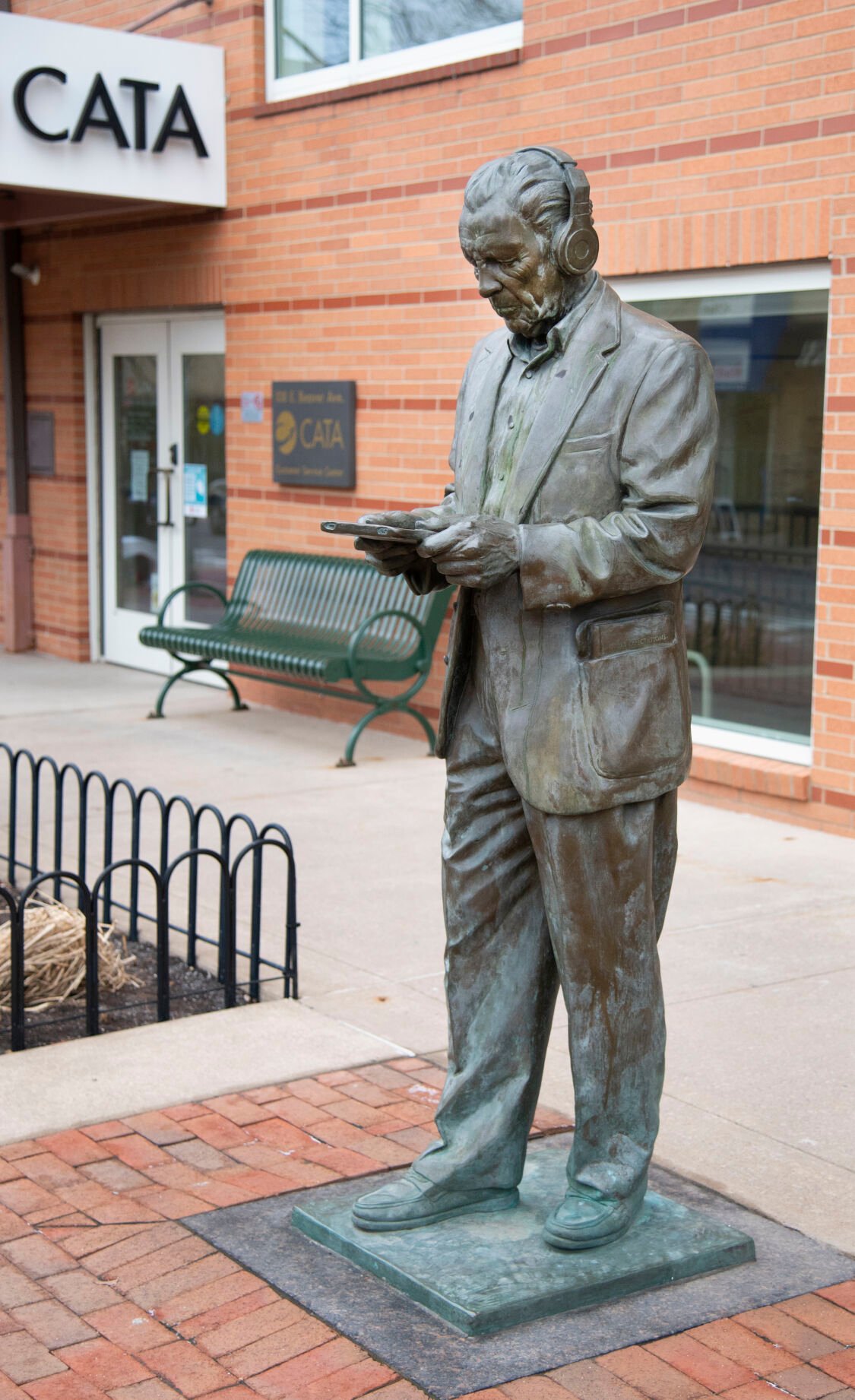 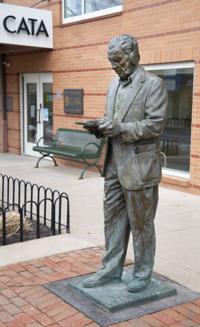 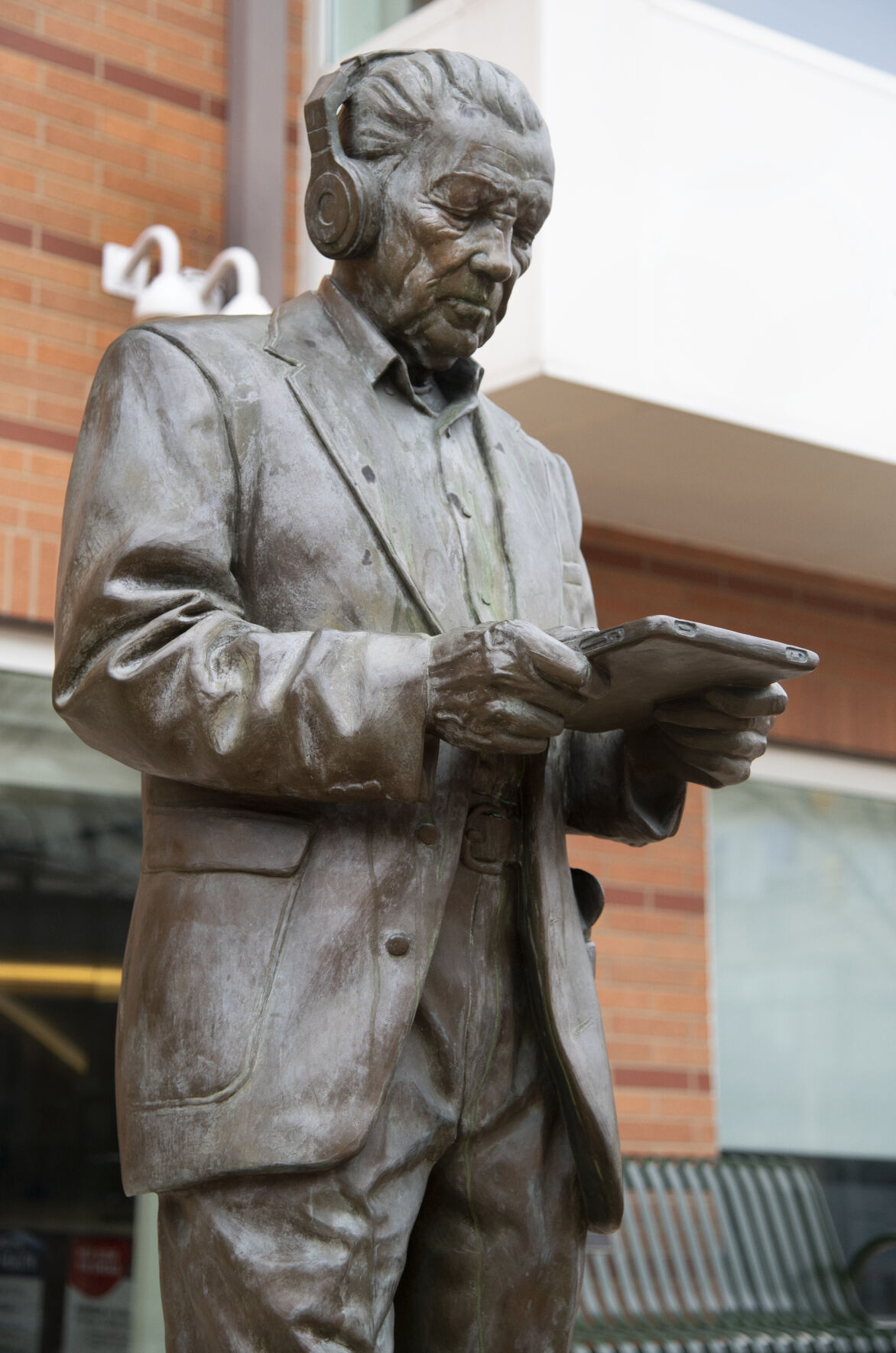 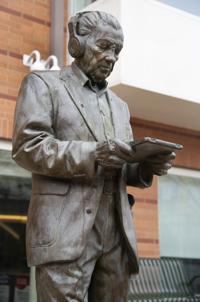 Almost seven years ago, a statue connecting the Schlow Centre Region Library and the CATAbus stop headquarters was built. Today, Downtown Eugene Brown still spends his days on the corner of Beaver Avenue and Allen Street, tweeting away.

The 6-foot bronze sculpture of Eugene Brown won in a nationwide competition held by the Central Pennsylvania Festival of Arts in 2013 with intentions to create something “that spoke to the changing nature of libraries,” according to the Eugene Brown sculptor Gavin Gardner.

The statue was inspired by Gardner’s grandfather, Ronald Eugene Gardner, and was one of the first “truly personal pieces” he ever created.

Gardner said his grandfather, who is now 94-years-old, taught himself about the digital world despite the idea that most older people “don’t even want to bother with it.”

“They say you can’t teach an old dog new tricks, and that just isn’t true,” Gardner said. “It’s never too late to get with it or learn another way. I really like that fusion. My work is always about fusing opposites — the old and the new.”

The statue’s Twitter activity doesn’t follow any pattern or method, according to Central Pennsylvania Festival of Arts Director Rick Bryant.

“Don’t overthink it. There’s no conspiracy here,” Bryant said. “Eugene loves his technology, and he will occasionally Tweet about things like what he’s listening to.”

Although the owner of the account remains anonymous, Bryant compared Downtown Eugene Brown to the Nittany Lion or Sneezy the Penn State Squirrel because of its intent to connect the community in modern ways through social media.

“He’s showing that technology is not just for young people,” Bryant said.

Cathi Alloway, director of the Schlow Library, said this idea of technology for all generations made the overall competition harder for the artist.

“The concept of representing the library but also the CATA office that occupies part of our building made it much harder for the artists,” Alloway said. “I mean, How are you supposed to create something that represents a library and a bus ticket office?”

“We didn’t want to show outdated technology,” Alloway said. “Eugene gets his information in a multiple range of formats.”

As an elderly man, Downtown Eugene Brown is seen looking at an iPad wearing Beats by Dre headphones — not the average statue to be outside of a library, according to Bryant.

“It’s a very old-fashioned trope to see a statue of someone reading a book in front of the library,” Bryant said, “so one of the things the sculpture did was turn that on its head.”

When visitors look closely, though, there is a book in Eugene’s back pocket as well. According to Bryant, “Great Expectations,” written by Charles Dickens, is “a little wry commentary on waiting for the bus.”

The objects on the statue work together to show the different formats of resources available by the Schlow Library while Eugene literally waits for the bus outside of CATA headquarters.

“There’s something about life-like bronze statues that the public enjoys,” Alloway said. “They reflect typical behavior in an urban environment. They become a landmark.”

Alloway said the statue has become a part of the community over the past several years.

“In the wintertime, volunteer knitters have knitted and left scarfs and hats on Eugene for homeless people,” Alloway said. “It’s a nice little ritual that happens with Eugene.”

Aside from putting Michigan apparel on Eugene Brown because Alloway is a University of Michigan alumnae, Alloway said the statue has not been “overly vandalized.”

“I have been known to put Michigan gear on Eugene whenever Michigan comes to play Penn State. People do goofy things like that,” Alloway said. “There’s been a few times when people have thrown sodas and things, but Eugene is widely respected for the most part.”

Gardner said he wanted to inspire people to be like his grandfather — always willing to learn more regardless of age.

Before this sculpture, Gardner said a lot of his work focused on “people who are supposedly great.” Although it’s good to acknowledge these people, Gardner said there are still so many common people “who never enter the great halls of fame [despite] enormous merit in their own right” because they weren’t chasing fame.

“There are heroes and great people around us every day who will never be written about in history books or [will] never [have] a statue made of them,” Gardner said. “My grandfather is a great man. I can’t even tell you. Everything about that man I admire. Everybody loves him.”

For this reason, Gardner said he wanted to speak to the average person through the Downtown Eugene Brown statue — any person has the ability to be “truly remarkable.”

On April 4, Gov. Tom Wolf will lighten restrictions on bars and indoor dining, as well as increase gathering limits across the commonwealth of…

Olivia Estright is a mental health and wellness reporter at The Daily Collegian. She is a freshman studying journalism.