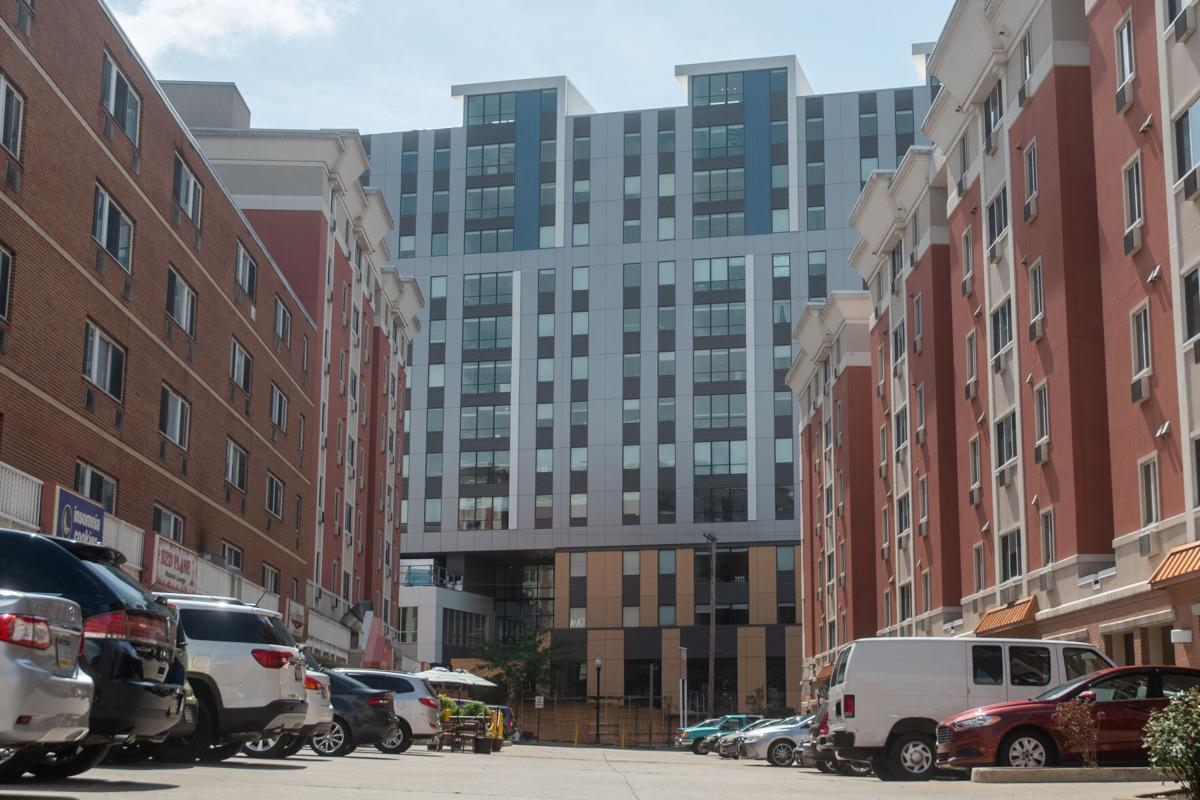 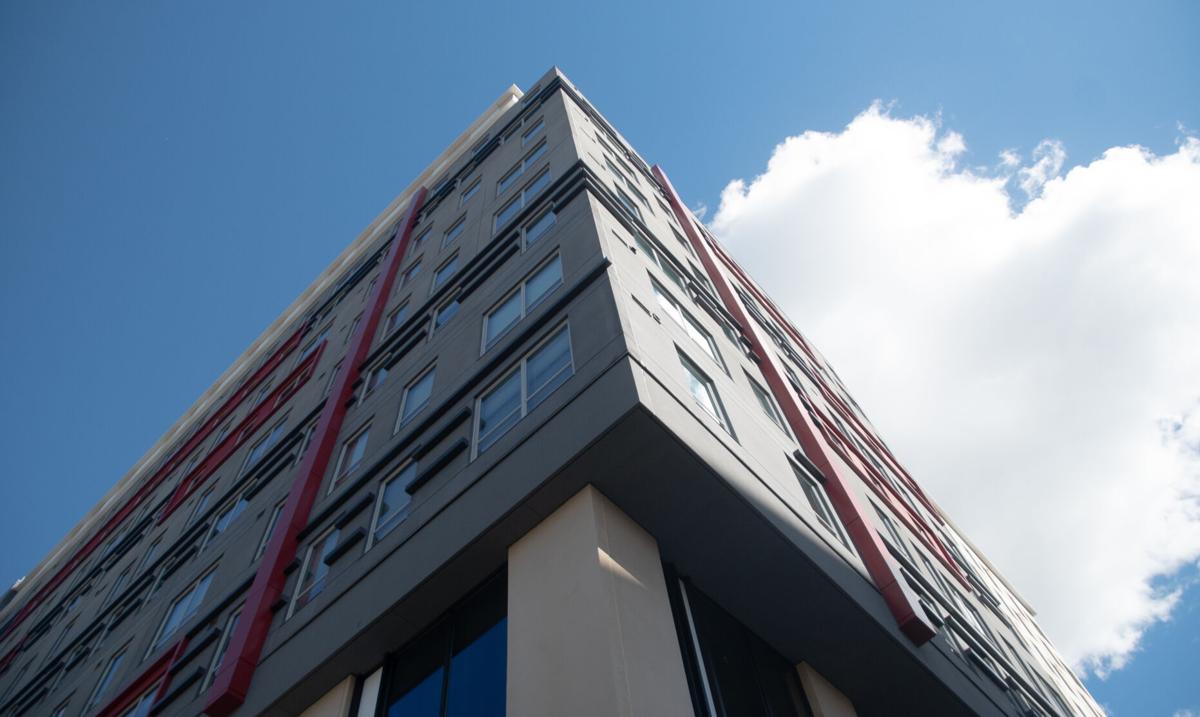 The Standard building on the corner of West College Ave. and North Atherton St. on Wednesday, Sept. 29, 2021.

From bursting pipes to crashing Wi-Fi, from indoor gaming lawns to multi-sport simulators, Penn State’s off-campus housing features some of the best and worst apartments available for students.

With plenty of apartment complexes and houses for rent, students have a variety of off-campus living options for their sophomore, junior and senior years.

For some students, like Maura Dougherty, living off campus is essential after living in a dorm.

Dougherty (sophomore-marketing) said she lives in Penn Towers, located next to College Pizza in the center of downtown State College.

Though Dougherty said Penn Towers is in a nice location, she experiences a fair share of maintenance problems.

“A pipe burst the other day, so that was really fun,” Dougherty said.

Dougherty said while she believes Penn Towers is “small and old,” she enjoys the smaller aspects of her one bedroom apartment.

“I have a great view of campus, and I have a balcony,” Dougherty said.

Dougherty said in the future, she would want her own room, but as a starter apartment, Penn Towers is a fairly priced and entertaining place to live.

Other students like Charles Qu said they enjoy living in luxury — specifically at newly constructed highrises like the RISE at State College.

Qu (sophomore-finance) said coming out of his freshman year, he knew he would be looking for an apartment in a convenient location with plenty of amenities.

“I think it’s a little overboard for the price,” Qu said. “They definitely jacked up the rent for next year, though, and I think a few other places are doing the same.”

According to the RISE’s website, some of its amenities include a fitness center, a yoga room, a game lounge, a hot tub, a lounge patio and a “TV Viewing Area.”

Qu said before deciding where he wanted to live, he toured The Maxxen, formerly known as the HERE, and the RISE. In the end, Qu said he liked the atmosphere of the RISE more than The Maxxen’s.

“The RISE is just very convenient for me,” Qu said.

Scott R. Williams of Reedsville, which is approximately 25 miles away from State College, wa…

Living in the Meridian, Kyle Bonner said he would rank it as a “middle ground” apartment competitor.

For Bonner (sophomore-computer science and math), the selling points of the Meridian were its price and the space it provided.

“The location’s not great, but it’s much more spacious than other apartments I’ve seen,” Bonner said.

Bonner said after talking with friends, he discovered he was only paying a fraction of the price his friends were paying elsewhere off campus.

Josh Mills, who also lives in the Meridian, said paying less than $700 for an apartment in downtown State College was the biggest reason he chose to live at the Meridian.

“There’s definitely better and worse places to live,” Mills (sophomore-management information systems) said. “The Meridian is definitely a walk, so to me, the price makes it a good spot to live.”

Mills shared Bonner’s sentiment of the Meridian being a “middle ground” apartment for the State College area, but it works for him.

Ellie Pappas said renovated space is a necessity for her.

Pappas (senior-public relations) said she lives in Beaver Terrace, which crosses off her three main points when looking for apartments — price, renovation and location.

“I lived in [Alexander Court at The Canyon] two years ago, and it was pretty run down, which is why they renovated it this past year,” Pappas said.

After living in Alexander Court before its renovation, Pappas said she realized she would be willing to spend more money to live somewhere renovated.

Pappas said her favorite part about Beaver Terrace is its location.

“You get to be downtown and pretty close to everything,” Pappas said.

Similarly, student Jonathan Augustin said he would rather live in a new or renovated complex — especially when getting a deal on the price.

Augustin (senior-computer science) lives in The Standard with one other roommate.

A major factor for deciding where he lived was the amenities offered by the apartment, Augustin said.

“It was a great deal,” Augustin said. “The average price is still fair. It’s worth it.”

At The Standard, residents have access to a multi-sport simulator, a clubroom, an academic lounge, a fitness center and yoga studio, a pool deck, a computer lab, two courtyards and free tanning.

“I couldn’t have picked a better place to live,” Augustin said. “It’s also really close to my classes.”

Apartments aren’t the only off-campus living option for students, though.

Maddie LaLomia said she lives in a house further downtown with five roommates.

“I live in an old house that’s definitely a fixer upper, but it’s in a cute little area,” LaLomia (senior-hospitality management) said. ”It’s nice to be a little off campus in a house.”

Although LaLomia is a 20-minute walk to the HUB-Robeson Center and living in unrenovated conditions, she said she doesn’t mind it.

“I’m paying a relatively cheap price to be living in a house, so I love it,” LaLomia said.

LaLomia’s best advice for students searching for off-campus housing is one she chooses to live by.