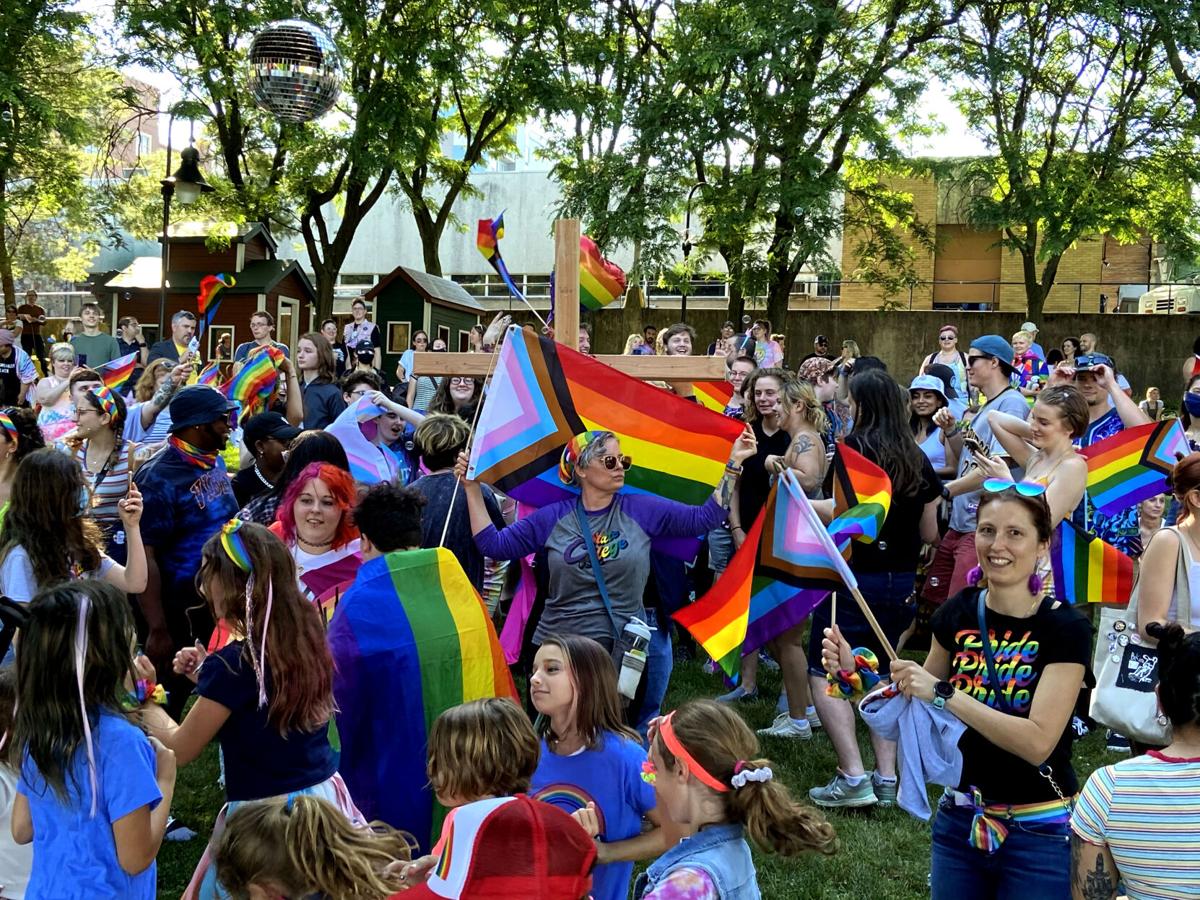 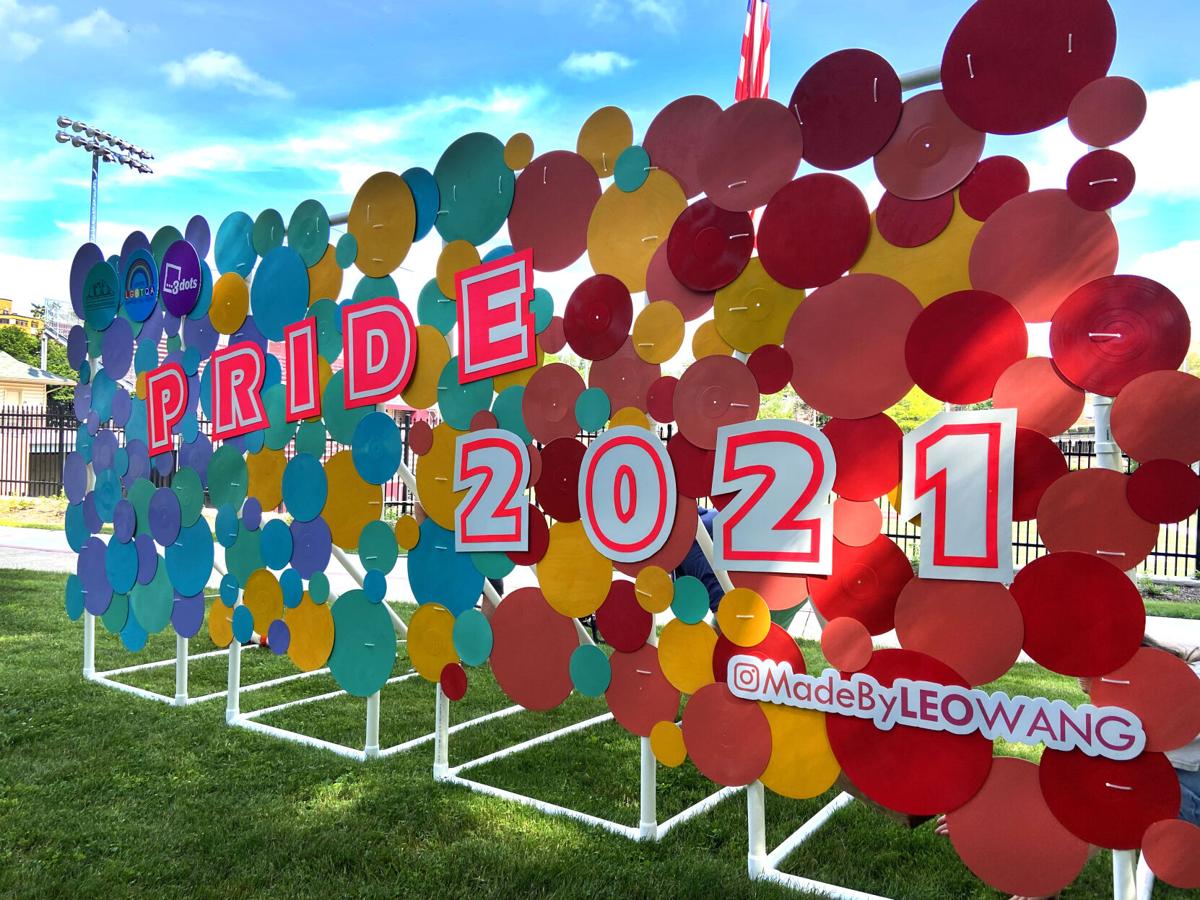 A sculpture made by Penn State graduate Leo Wang with the words "Pride 2021" was displayed in Sidney Friedman Parklet for the first annual State College Pride Ride on June 12, 2021. The event, which was organized by the Centre LGBTQA Support Network and State College borough, featured a car caravan, speakers and musical performances.

The event, which was a celebration of Pride month, was organized by the Centre LGBTQA Support Network and the borough of State College.

Saturday's Pride Ride was the first in-person Pride event organized by the CLSN, a community-based organization that holds events such as Drag Bingo and movie nights. CLSN also holds support groups, according to the group's treasurer, Mark Hayes.

Jared Kehler joined the group in December 2020. Although he began working for CLSN recently, Kehler has already worked with several groups and events, including the Bring Your Own Queer youth group.

Hayes and Kehler attended the Pride Ride and were selling T-shirts to promote CLSN during the event.

Director of Community Engagement for the borough of State College's LGBTQ Advisory Committee Kevin Kassab was one of several people who helped organize the event on behalf of the borough.

Kassab said his "heart is filled with love and appreciation" for the LGBTQ community and acknowledged "how much [the community means] to the State College community."

Around 5 p.m., members of the community who registered their vehicles were able to participate in a car caravan down a pre-planned route around the State College area.

Dozens of cars draped in rainbow flags and other Pride-themed decorations drove by the park beeping as a cheering crowd gathered along South Fraser Street.

The caravan was led by a State College Police Department truck waving a Progress Pride Flag.

Several cars were playing loud music on their stereos as they passed, and some participants even followed the caravan on roller skates.

Community members in the park gathered to experience live music and free popcorn, where there was a sculpture created by Penn State graduate Leo Wang that many used as a backdrop for photos.

Prior to a performance by the local acoustic band Anchor&Arrow, several people addressed the crowd to share their thoughts about the event and what Pride means to them.

Draped in rainbow head-to-toe and wearing a rainbow flag like a cape, Pennsylvania Lt. Gov. John Fetterman approached the microphone to speak.

Fetterman recently hung a Pride flag on the balcony of his state capitol office to celebrate Pride month, but it was removed by state employees just hours later in accordance with a Republican-backed fiscal code provision passed in 2020. The provision prohibits flying any flag other than the American flag, Pennsylvania's state flag or a flag honoring missing American soldiers.

In his speech, Fetterman stressed his concern for Pennsylvania's treatment of LGBTQ individuals.

"Our state is backwards," Fetterman said. “We are the only state in the Northeast that allows this kind of discrimination against the gay and trans communities, and it's unacceptable."

Fetterman said he and Gov. Tom Wolf will "never stop pushing" until Republicans are willing to pass anti-discrimination legislation that allows for "equal protection under the law."

Kenyatta spoke about the Orlando Pulse nightclub shooting and the ongoing Fulton v. City of Philadelphia case, which will affect adoption rights for LGBTQ individuals. He said he believes elected officials can do more to protect LGBTQ rights.

"If you are here and you are queer, I want you to run for office," Kenyatta said.

The borough of State College plans to host more Pride events and make the "Pride Ride" an annual event.

Rita’s Italian Ice plans to reopen at its new State College location on June 23, according to a spokesperson for Rita's.

William Aguirre is a crime and courts reporter for The Daily Collegian. He is a junior majoring in digital and print journalism with a minor in ethics.