You are the owner of this article.
Edit Article Add New Article
You have permission to edit this article.
Edit
Home
Latest
News
Sports
Football
Opinion
Lifestyle
Multimedia
Join
Subscribe
Share This
Borough • Click for more stories •
1 of 6 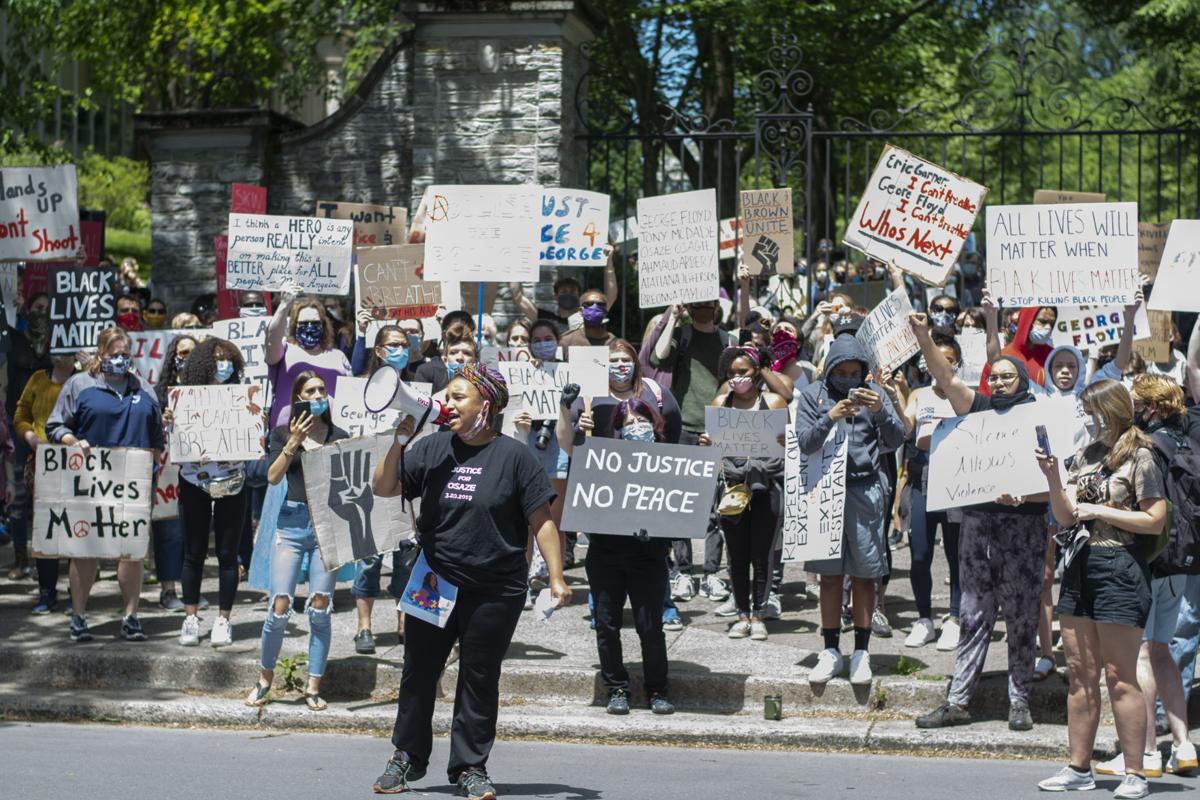 Nanre Nafziger speaks at a Black Lives Matter protest in honor of George Floyd at the Allen Street Gates Sunday, May 31, 2020. Protests took place nationwide after George Floyd was killed by a police officer on May 25 in Minneapolis. 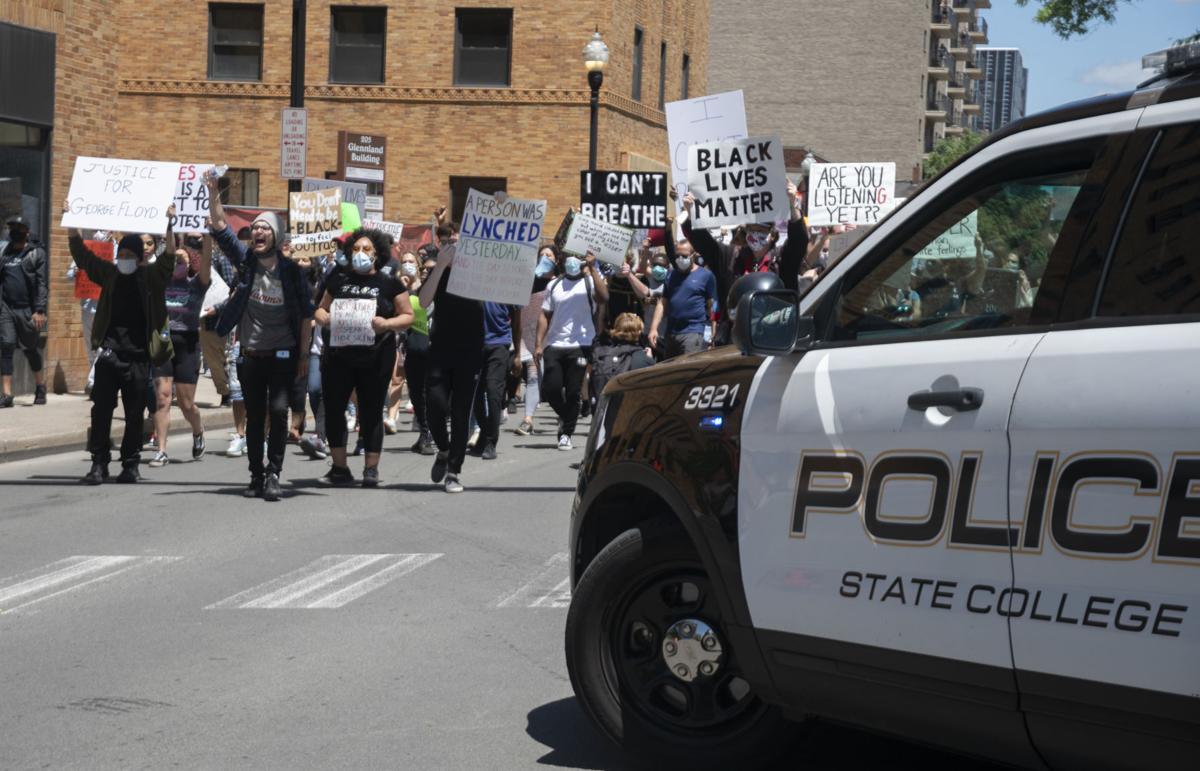 Protesters march down Beaver Avenue while police block off roads during a Black Lives Matter protest in honor of George Floyd on Sunday, May 31, 2020. Protests took place nationwide after Floyd was killed by a police officer on May 25 in Minneapolis. 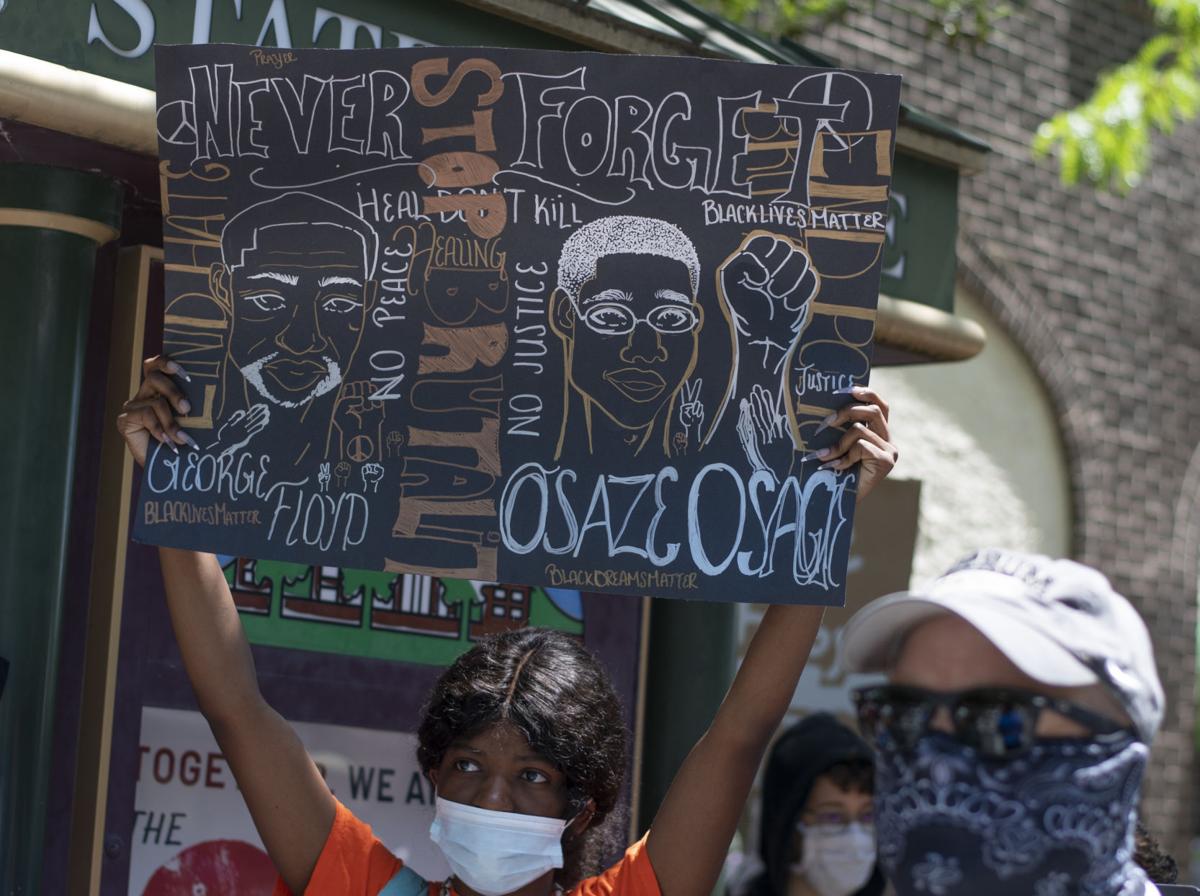 A protester holds a sign at a Black Lives Matter protest in honor of George Floyd at the Allen Street Gates Sunday, May 31, 2020. Protests took place nationwide after George Floyd was killed by a police officer on May 25 in Minneapolis. 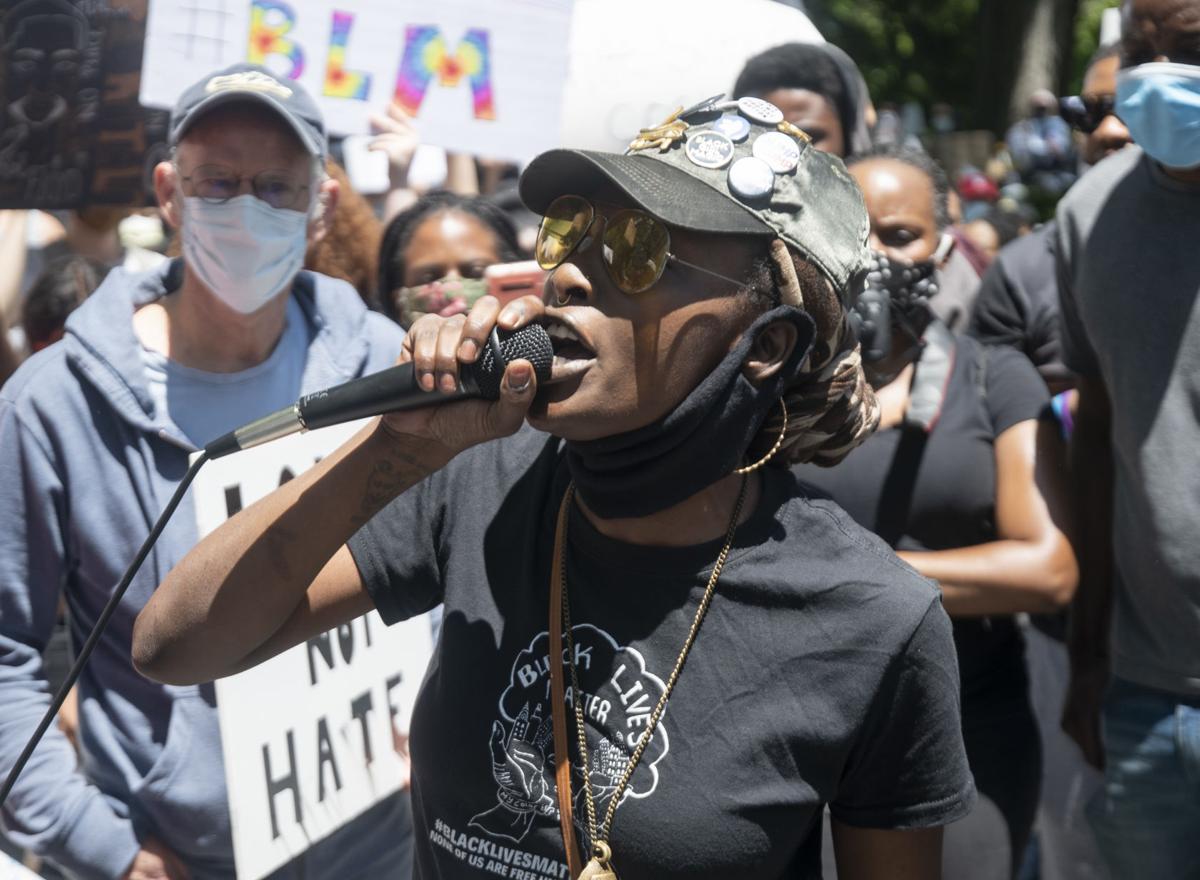 Tierra Williams speaks at a Black Lives Matter protest in honor of George Floyd at the Allen Street Gates Sunday, May 31, 2020. Protests took place nationwide after Floyd was killed by a police officer on May 25 in Minneapolis. 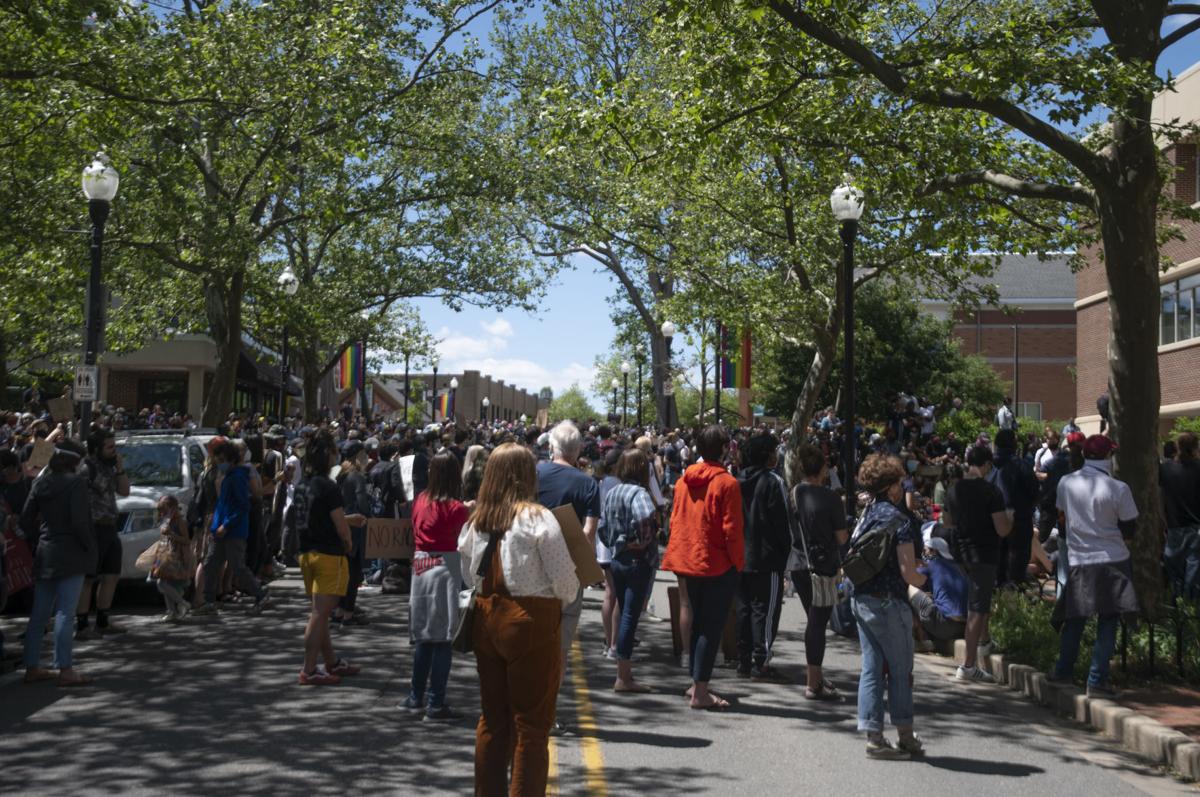 Hundreds gather outside the State College Municipal Building at a Black Lives Matter protest in honor of George Floyd Sunday, May 31, 2020. Protests took place nationwide after Floyd was killed by a police officer on May 25 in Minneapolis. 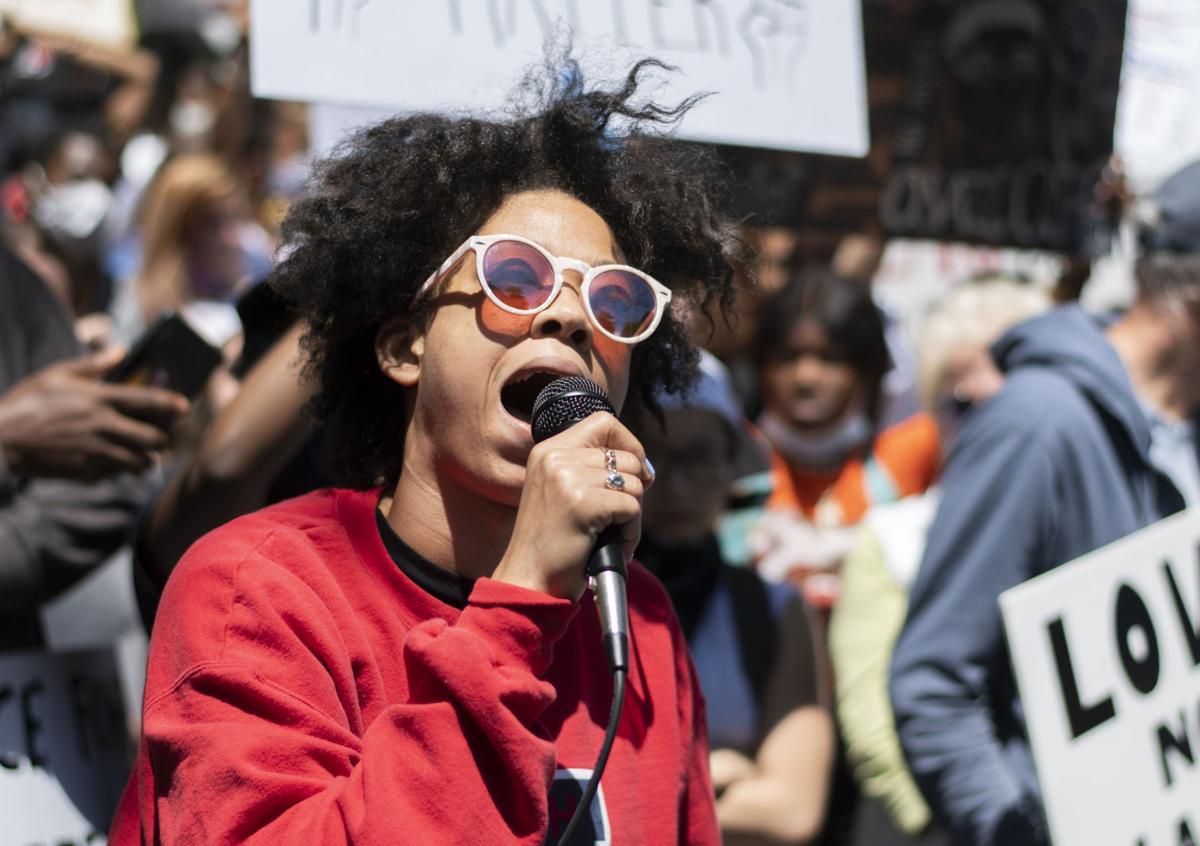 A protester speaks at a Black Lives Matter protest in honor of George Floyd at the Allen Street Gates Sunday, May 31, 2020. Protests took place nationwide after George Floyd was killed by a police officer on May 25 in Minneapolis.

Sunday afternoon, State College roared with chants advocating for equality and justice during a Black Lives Matter protest sparked by the death of George Floyd.

The peaceful protest began at the Allen Street Gates and quickly filled the streets with hundreds of protesters carrying signs and chanting together.

Floyd was a black man who was killed by a police officer in Minneapolis on May 25 during his arrest for alleged forgery. Floyd was restrained on the pavement as the officer held his knee on his neck for an extended period of time.

In the position, Floyd said he couldn’t breathe and called for his mother. He was unresponsive during a portion of the arrest and later died from his injuries.

Floyd’s death prompted the protest; however, the event sought to remember all black people who have died or experienced violence and discrimination rooted in racism. Breonna Taylor, Ahmaud Arbery and Osaze Osagie were among the names of black individuals lifted in chants by the crowd.

At 1 p.m., protestors marched eastbound on College Avenue before turning onto McAllister Street and continuing the march on Beaver Avenue. The march ultimately met at the State College Municipal Building, where individuals shared their thoughts and experiences to a crowd of hundreds.

Individuals of all races, genders and ages held signs with statements such as, “I can’t breathe,” “Love not hate” and “Black lives matter.”

The event was organized and spread through social media by rising State College Area High School senior Lilyana Hasan. She said it was “really hard” to gain momentum when planning the event, and she did not expect the event to have more than 100 people.

“I did not know it would travel this big, which is amazing,” Hasan said. “It is a beautiful thing that we are all here right now.”

Hasan said she was inspired to organize the protest because of how often she saw injustices by the police on her television.

“Organizing a protest is a form of change and posting [on social media] is not enough,” Hasan said. “You have to speak out publicly.”

Hasan was in contact with the State College Police Department throughout the event. The police blocked off the roads that protesters marched down.

No actions were taken by the police during the event.

At the Allen Street Gates, State College resident Tierra Williams took it upon herself to direct the protest toward hearing black voices.

Before the crowd began to march, Williams took the microphone from another protester who many felt was limiting black voices.

“Honestly, it wasn’t until I snatched that mic away that people started realizing that even though white people are here and we appreciate your solidarity with us in this moment, it is not your space to speak,” Williams said. “Right now it’s time to listen, but due to the embedded [and] systematic supremacy and privilege white people have, they felt that it was their need to somewhat take over this today.”

Having lived in State College for about two and a half years, Williams said she has experienced racism in the workplace and at the grocery store. She added she once heard a “little child” call her son brown.

“We’ve been listening to you guys, telling us what we can to make ourselves less of a target,” Williams said. “If we dress better, if we use the King’s English, if we cut our hair and change our style, somehow, someway we will be accepted.

“But we’re still dying no matter if we have on suits or we have locks in our hair.”

“I’m hoping that this event wasn’t just for show, wasn’t just because people aren’t at work and don’t have anything to do,” Williams said. “I really hope that they’re going to pursue justice in this city and in the nation.”

Students Alonzo Arizaga and Keegan Walker attended the protest and shared their personal experiences that led them there.

Arizaga (junior-computer science) said he lived in “the next apartment down” from Osagie and shared his experience from the night Osagie was killed.

Osagie was a black State College resident who was killed by a State College Police officer while police were serving a mental health warrant at his apartment on March 20, 2019.

“...My mom [was] calling me, she doesn’t know what the f--- is happening and my street’s run with police,” Arizaga said. “They thought I got arrested because I’m a person of color, too.”

Arizaga added he believes Osagie’s death was “grossly mishandled” and involved “disgusting behavior” from the police.

“I find out that the f---ing police killed a mentally disabled man, and for them to take a life like that?” Arizaga said.

The Centre County district attorney and the State College Police Department both investigated Osagie’s death and found the involved officers were not at fault.

Walker, a former State College Area High School student, said she dropped out of the school due to alleged racial discrimination within the school.

“I was always called the N-word, teachers would put me in rooms by myself, and I had the bathroom taken away from me for three months,” Walker said. “I was never treated fairly and I couldn’t take it anymore.”

Walker said she believes white students would not have been treated the way she was at State High.

“They felt no sort of sympathy,” Walker said. “But for the white students that were failing or not coming to school, they would help them, call their parents.”

As for the protest, Walker said the experience was “uplifting” and warmed her heart.

“I really think this is it, this is the change,” Walker said. “Our revolution is happening right now, and it’s going to end with our generation.”

Elias Brown, a Penn State student and the president of the Penn State Black Student Union, was also one of the leading voices at the Allen Street Gates, as he demanded the university take action as the community did during the protest.

“As a student, it is very unacceptable that I heard about [the protest] from a third party source,” Brown (junior-biochemistry and molecular biology) said. “[Penn State] President [Eric] Barron and everyone else should have been out here standing with us.

“To take our tuition money and everything else, but to not care about a life and preach inclusivity and diversity is unacceptable.”

The recent death of George Floyd left people all over the world upset and angry at institutions in need of major reform in the United States.

Sunday evening, community members gathered in downtown State College for the second week in a row to peacefully protest the deaths of George F…

Ashley Hayford is a columnist at The Daily Collegian. She is a junior majoring in digital and print journalism with a minor in political science.