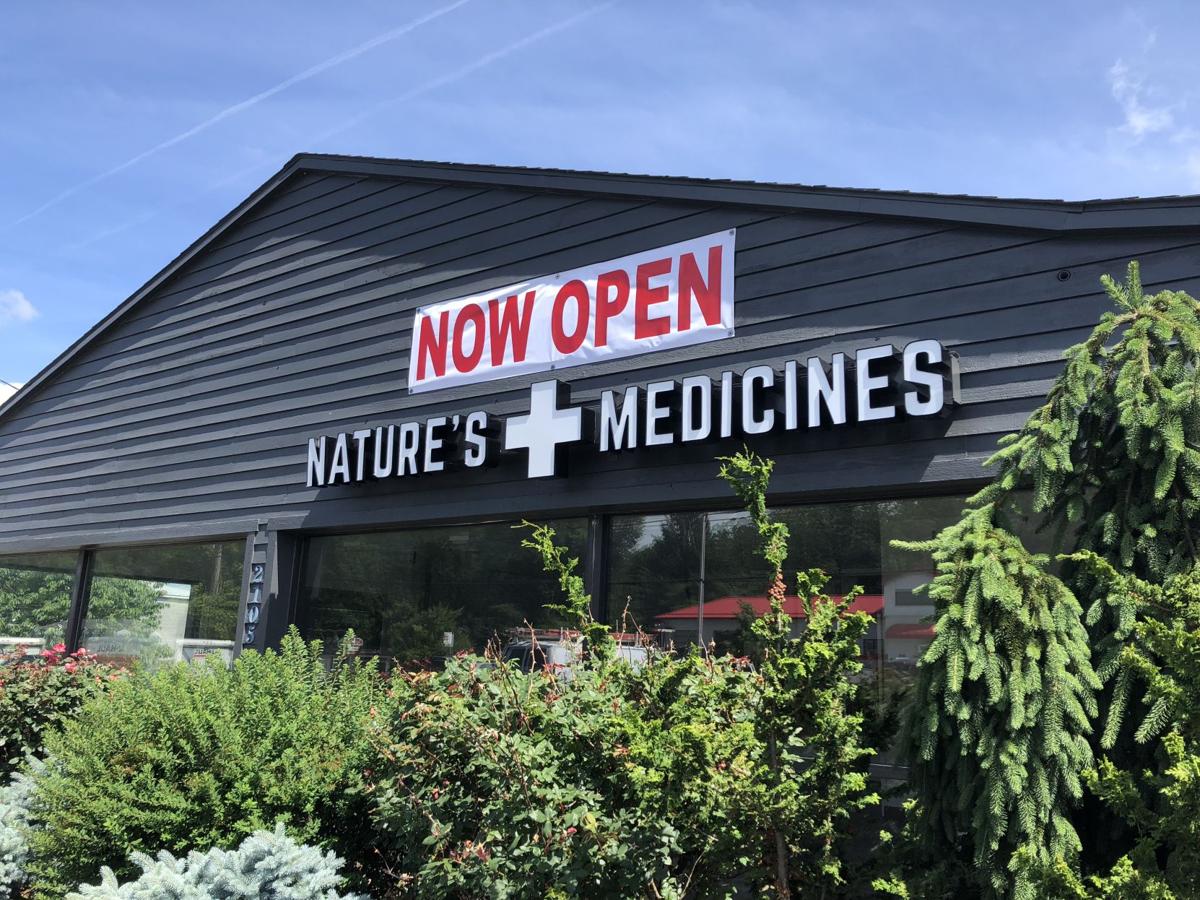 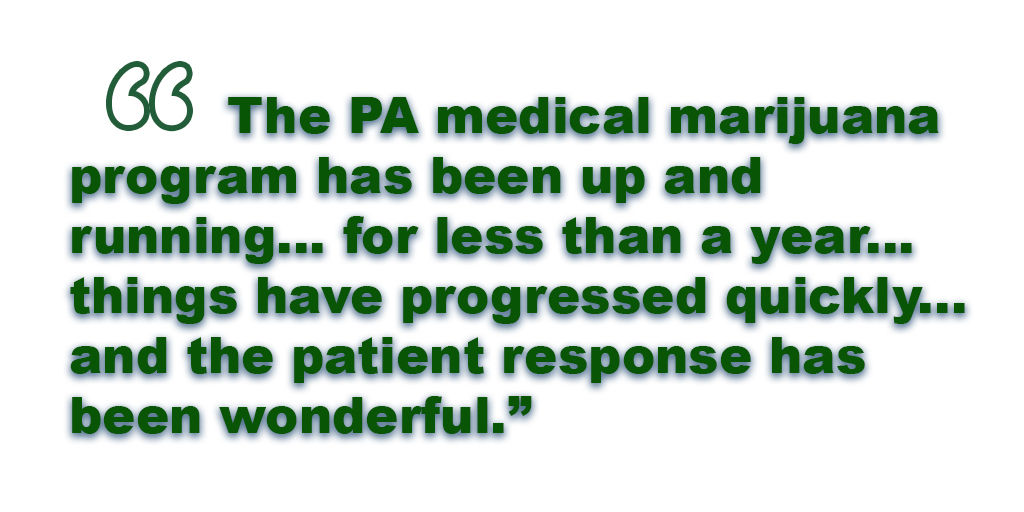 Pennsylvania’s Medical Marijuana Program has been signed into law for two years now. Since the program’s first passing, the state’s Department of Health has been working toward fully implementing the program.

With State College recently planting a medical marijuana dispensary location on North Atherton Street, the question stands: where is Pennsylvania in regards to research and accessibility to dispensaries, physicians and patients?

Most recently, Pennsylvania Governor Tom Wolf agreed to sign an amendment created in response to a Commonwealth Court’s decision to interrupt Health Department regulations for licenses issued to Pennsylvania dispensaries and growers who partner with state medical schools last month.

Additionally, Penn State was approved to be one of these eight participating schools in May.

“Today, medical research is so limited by the federal government that only a few doctors can even have access to medical marijuana,” Wolf said in a media release when the eight schools were approved. “Pennsylvania's premiere medical schools will be able to help shape the future of treatment for patients who are in desperate need not just here, but across the country."

The most recent bill was created to get this program back on track.

According to the press release, the state has registered more than 37,000 patients for the program, along with dispensing more than 31,000 medical marijuana products. Additionally, 23 dispensaries and 12 “growers” are set to begin operations.

“The PA medical marijuana program has been up and running at this point for less than a year,” Bryan Doner, the chief marketing officer and co-founder of the Compassionate Certification Centers, said via email. “Since that time, things have progressed quickly in PA and the patient response has been wonderful.”

Since then, new dispensaries and grow operations have opened up across the state, he said.

Wolf has directed many Pennsylvania initiatives into research of medical marijuana, but where does Pennsylvania’s law stand nationally?

Currently, there are 30 states, including California, Ohio and West Virginia, which allow the use of medical marijuana across the nation. Each state has varying laws and regulations, ranging from complete legalization of medical and recreational use, to states only allowing use for select conditions.

Pennsylvania’s Act 16 of 2016, for example, only allows approval for Pennsylvania residents that have one or more of the “serious medical conditions” defined by the bill.

“The second round of licenses for dispensaries and nurseries has been initiated, new qualifying conditions have been added to the original 17, including opiate addiction [and] substitution therapy,” Doner said.

A variety of conditions can qualify for a Pennsylvania Medical Marijuana Certification by a doctor in Pennsylvania. Addiction substitute therapy, autism, cancer, Crohn’s disease, epilepsy, glaucoma, intractable seizures, post-traumatic stress disorder, and severe chronic or intractable pain are some of the various conditions that qualify for a certification, according to the Compassionate Certification Center website.

“The patients that come to see us have largely exhausted their resources with regard to traditional medical treatment for their disease processes,” Doner said. “Their treatments are often times inadequate, ineffective, and/or carry a large amount of troublesome side effects.”

If a resident meets the requirements, that patient has to obtain a medical marijuana certification card.

In Pennsylvania, it is possible for patients to use medical marijuana in many forms including pills, oils, topical forms, including gel, creams, or ointments and many other forms with both psychoactive and non-psychoactive qualities.

“To be honest, our demographic varies greatly, across the board,” Doner said. “We see a large number of elderly patients as well as pediatric patients. With that said, it is very difficult to say one specific age related demographic makes up most of our patients. On the other hand, the most common certifying diagnosis by far is chronic pain.”

A Compassionate Certification Center location is “coming soon” to State College, according to the official website. However, the center started seeing patients in Pennsylvania in December 2017 with one clinic open.

Since that time, they have evaluated and certified well over 5,000 patients and have opened multiple new locations across the state, Doner said.

“It is very important for us to have centers located across the state that provide the most readily available access for patients as possible,” Doner said. “Given the geographic location of State College in PA, I think it would be one of the natural choices for us to have an office.”

In order to obtain a card in Pennsylvania, patients must be a resident of the state with proof of residency, such as a state-issued I.D., United States passport or other photo I.D. It is also possible for people who recently relocated to Pennsylvania to receive a card, but is given out on a case-by-case basis.

According to the center, a letter from a physician is not acceptable to qualify for a medical marijuana card. In order to obtain a card, a patient must schedule an appointment with the certification center to get a card.

However, receiving a card and maintaining the membership comes at a cost. An individual has to pay upwards of $199 for a medical marijuana visit and $125 for a yearly renewal fee for the card.

“Our price is average, if not lower than most states, especially new states,” the center stated on its website. The center also stated they can provide a list of nonprofit organizations that can offset the annual doctor’s visit fee in the case that a patient cannot afford it.

However, since California became the first state to legalize medical marijuana, insurance has never covered the cost of a doctor’s visit.

Despite the increase in accessibility, Doner said there are many misconceptions that still exist about patients.

“Medical marijuana isn't about getting intoxicated or getting high, but rather about patients feeling better, lessening suffering, and helping to promote a better quality of life,” he said.

Patients do not have to be "stoned" to get benefits of medical marijuana, he continued.

“With the science and technology we have today, in many cases, we are able to provide patients with medical cannabis derived medications that not only give them the beneficial or therapeutic effects, but that also have minimal to zero psychoactive component,” Doner said.