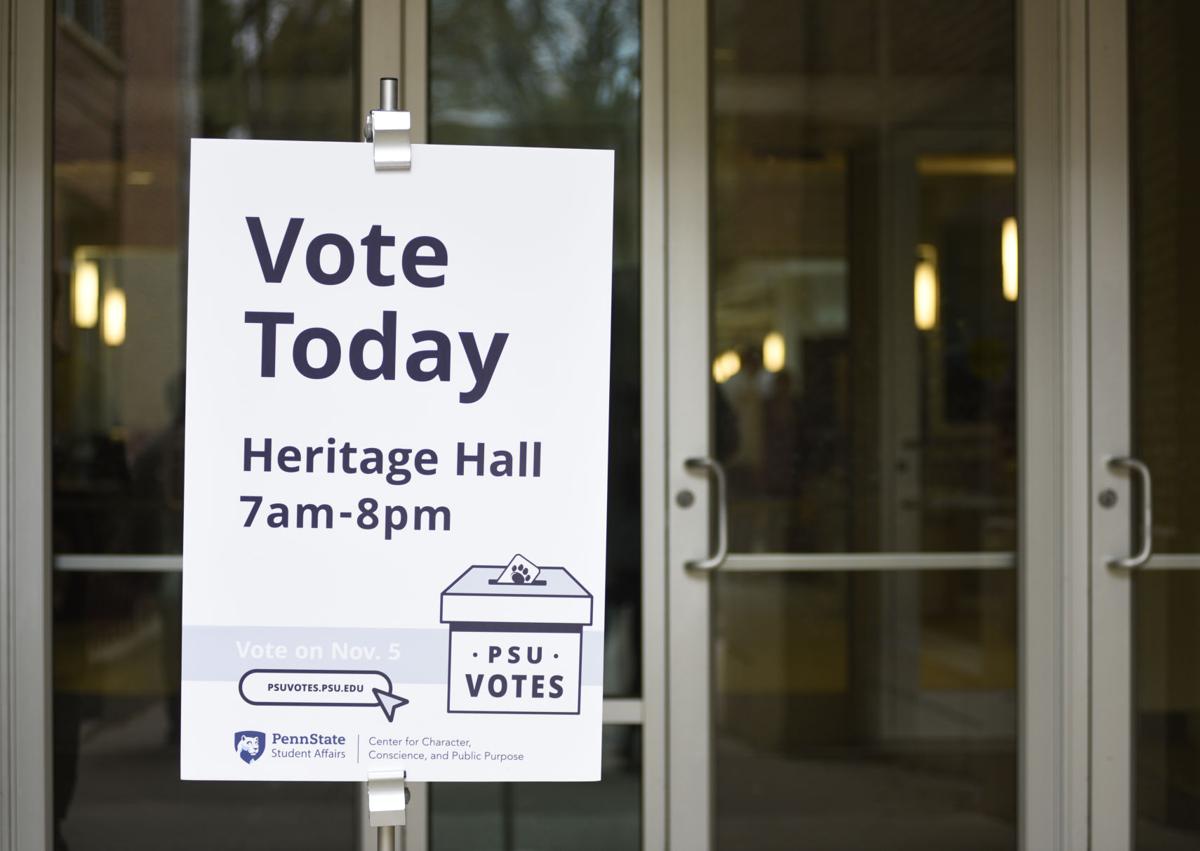 A sign to encourage voting in front of the HUB-Robeson Center on Nov. 5, 2019. 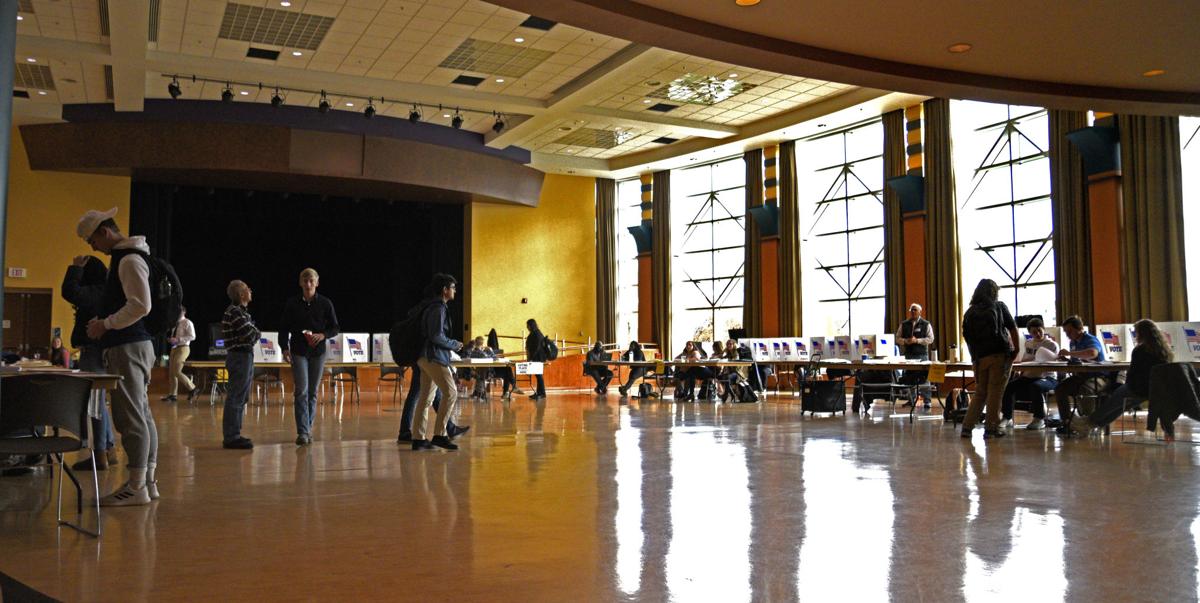 Voting tables at Heritage Hall in the HUB-Robeson Center on Nov. 5, 2019.

Editor's note: The Daily Collegian will provide coverage throughout the day of the 2019 local elections in State College.

Friends Meeting precinct was full of families voting after work and before dinner.

Accompanied by her two children, Kirsten Jensen said she came to the polls to vote for offices she felt were most important including Borough Council, Commissioners, and most importantly School Board.

“I just want to make sure that we have people on the school board that are open-minded, and not going to make it so that we can’t teach science in school anymore,” Jensen said.

Devon D’Andrea said she voted by absentee ballot in her hometown of Williamstown, New Jersey this election.

“I’m 20 so I could have voted for two other elections, and I didn’t because I was at school. I’m disappointed in myself for that, but the reason that I voted for the first time was because my dad is running for School Board back home,” D’Andrea (junior-broadcast journalism).

"Obviously I’m just another vote for him, and that’s pretty much the main reason why I voted, but I’ll definitely vote from here on out,” she said.

Amelia Alexander accompanied her friend to the polls, however she did not vote.

“I didn’t vote because I didn’t take the time to educate myself on the individuals who were running so I didn’t think that I would be able to give a fair vote,” Alexander (senior-broadcast journalism) said.

Although she didn’t vote, Alexander said she would have voted in State College rather than in her hometown.

“I would have voted here,” Alexander said. “The outcome could really impact everybody in State College, and around the area."

As students flowed in and out of Heritage Hall in the HUB-Robeson Center to cast their vote, members of the College Democrats stood at the entrance handing out ballots and encouraging students to vote for members of their party.

Jacob Klipstein (junior-history, political science and Jewish studies), administrative vice president of the College Democrats and at-large representative of the University Park Undergraduate Administration, said so far the HUB has seen around 300 voters in the HUB, which he said has been a good turnout for a local election, and compared to the 2017 local elections.

Kelsey Denny, president of the College Democrats, also stood with the members of her club to encourage voters, and expressed the importance of voting even during smaller elections.

"The candidates we elect during this process are the ones that directly impact our daily lives," Denny (senior-political science and women's, gender and sexuality studies) said.

She also said she tries to "encourage" students to switch their voting registration to their university address rather than their home address, as students spend the majority of the calendar year at school.

"Definitely seek out the candidates who you think are pushing the most progressive things for students," Denny said.

Anjali Sapre was among the student voters in the HUB, and echoed Denny's sentiments about the value of local elections.

"It's part of being an American citizen, I think it's important to exercise our rights," Sapre (sophomore-biology) said. "No matter the size of the election I think we all can make a difference."

Another student voting, Laurel Bachy, emphasized the importance of younger people going out to vote, as they are the "future America."

"While I may not live here all year long, a majority of my year is spent here," Bachy (freshman-biomedical engineering) said. "So I want to have have the best experience, and that starts with the people who are making the decisions for the State College [and] University Park area."

As mid-morning rolled into the afternoon, a quietness hung over the second floor of the Municipal Building — occasionally broken by the footsteps of a voter on her lunch break, ready to cast her vote in the 2019 local election.

For Penn State student Wylyn McCullough, it was her eighth time volunteering at a polling place, as she has volunteered since she was 17. McCullough, who volunteered to serve as the judge of elections in this election, will help voters cast their ballot from early morning to 8 p.m.

McCullough (junior-material sciences and engineering) said her mentors have "instilled a sense of civic duty" in her since she was young, which is why she continues to take her part in elections.

"I'm a firm believer in promoting democracy and trying to help people achieve that status. I enjoy it because it's free volunteering — you get to volunteer, you get to see people in the community, you get to help them understand the process of voting," she said. "You get to protect the sacred institution that is voting. When it comes down to it, that's the biggest part."

She added it's important for members of younger generations to take part in the voting process and volunteer within that process.

Austin Melius, a junior at Bellefonte Area High School, was one of the five volunteers working at the Municipal Building polling place. While Melius cannot vote in this election, he felt his work as a volunteer was important to do as a citizen.

While McCullough described voter turnout as "decent," she said the number of people who voted as of 11:30 a.m. was "kind of slim" compared to presidential elections and primary elections.

"Nowadays, in our modern democracy, it's really easy to think that your vote doesn't matter because there's the question of people being disenfranchised or the question of whether or not democracy is working, but I think if you give up on democracy at the lowest levels, you let it take a turn for the worse," McCullough said. "I think people who think only presidential elections matter don't really necessarily have the experience or understand it's the smallest actions that make the biggest difference."

St. Paul’s United Methodist Church was off to a slow start Tuesday morning as locals headed to work for their 9-to-5 jobs.

Matthew Montgomery was the first student to enter the precinct in the 9 o’clock hour. He expressed the importance of voting in local elections that are often overlooked.

“These are the people that literally control our everyday life,” Montgomery (freshman-aerospace engineering) said. “I feel like you’re giving up rights if you don’t come out here and vote.”

Montgomery added that he feels the most important local seats up for grabs are for the Centre County Board of Commissioners.

Do Penn State students plan to cast their vote on Election Day 2019?

Elections bring about a variety of questions amongst the general population, typically in regard to the candidates in the running and their pl…

Here are the results of the 2019 Centre County local election

The 2019 Centre County general election results are in, with significant changes in store for the State College mayoral position and the State…