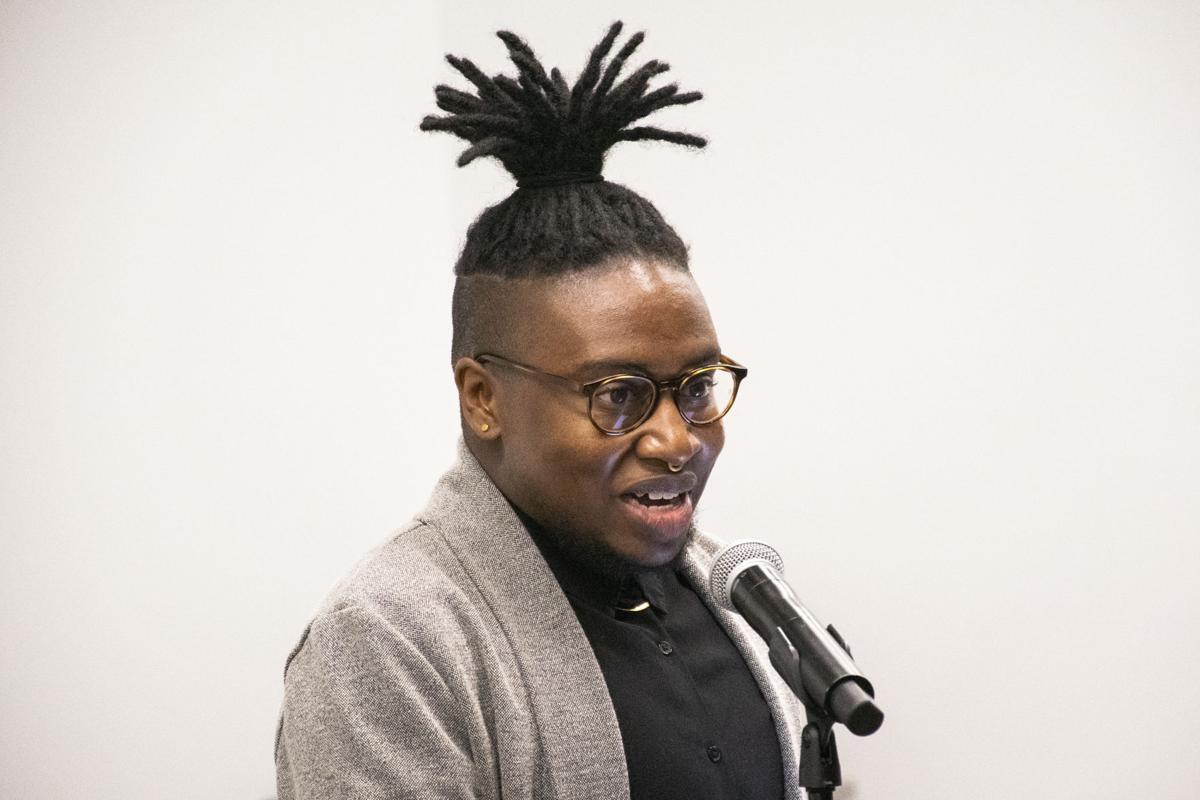 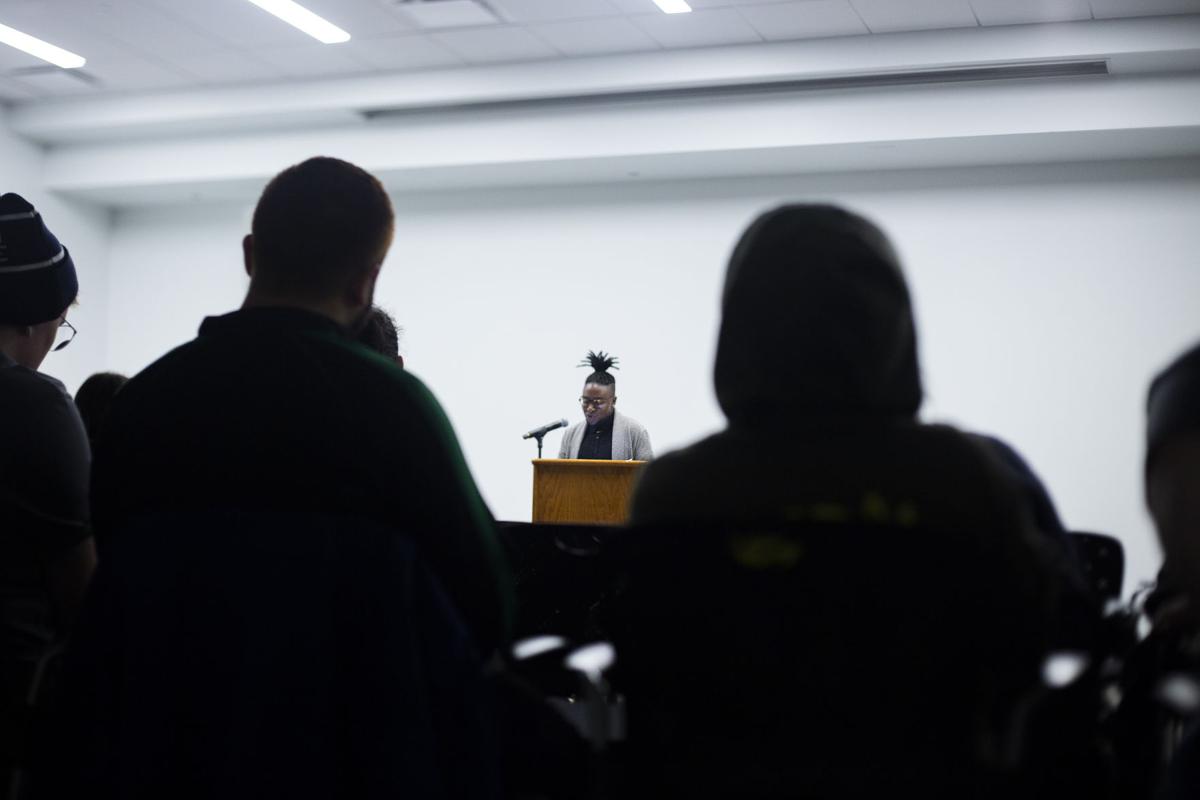 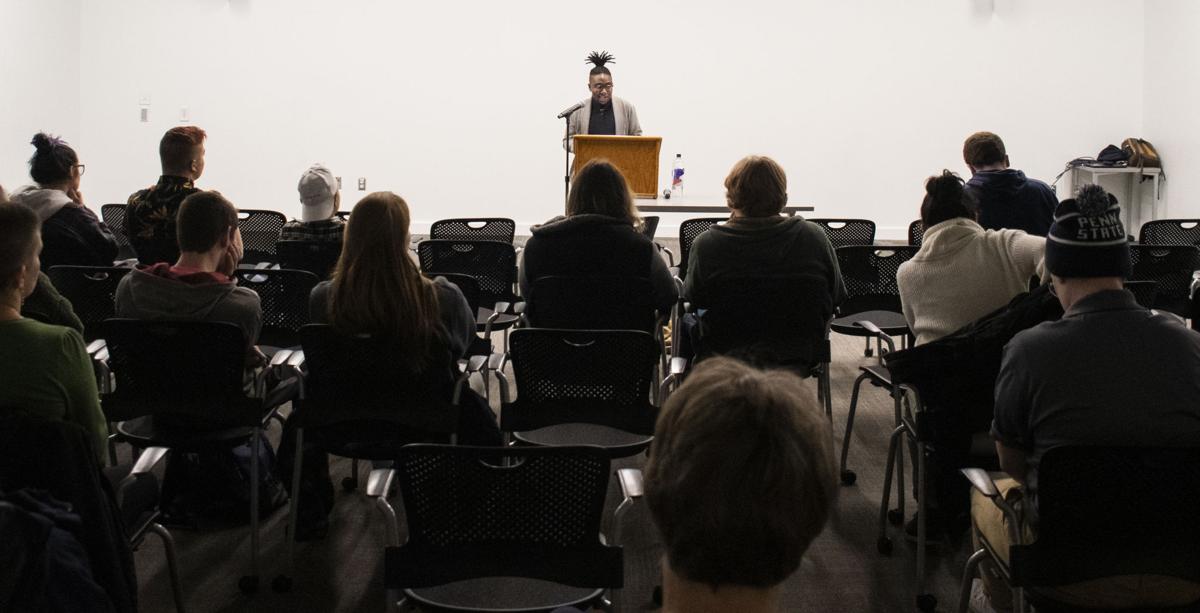 Kavi Ade, a nationally recognized black transgender poet, educator and activist spoke to Penn State students Thursday evening in the HUB about growing up queer in a home that rejected who they were, with a question and answer session following the lecture.

The event was hosted by the Queer and Trans People of Color (QTPOC) at Penn State, as well as the Center for Sexual and Gender Diversity as part of Transgender Awareness Month.

Ade, who uses they/them/their pronouns, is a Philadelphia native of Afro and Indigenous Caribbean descent. They hold a degree in Social Justice from Hamline University in St. Paul, Minnesota.

Ade spoke to a crowd of about 30 on their struggles in growing up queer and black, coming out to family members and being an activist against police brutality against black people.

The keynote consisted of poetry written over the years signifying Ade's journey and struggle to become the nationally recognized artist they are today, and to remind students that they’re never alone in their own struggles.

Growing up, Ade said they were one of the rare queer people in their school, and with the added layer of being West Indian, they had no one to relate to at the time.

“It was a time of alienation. I’m trying to relate my life to those white queer women because there was nothing else that even marginally reflected my experience,” Ade said. “I felt like I must be the only queer West Indian kid in the world.”

Ade said their mother, a devout Jehovah’s Witness, never truly accepted them for who they were growing up, fueling a lot of pent-up feelings of distance and lack of retribution from their family.

“I get it. I’m foreign territory, the whisper of someone she once knew how to love, now each time she looks at me, she is searching for something I cannot give back,” Ade said. “She wants me to recognize the shame of it all. Shame is built like bricks into my body.”

“I want to tell her, I’ve always been trapped between identities, but this new vessel, this canvas, is the closest I’ve come to being in love with myself,” they added.

In terms of inclusivity in the community, Ade explained that while the typically painted picture of the greater LGBTQ community is an “all-inclusive rainbow,” there are still some queer white people who are racist and transphobic.

“Existing as a marginalized identity within a marginalized community, a continuous act of refusing to diminish one’s self in the face of oppression, is a radical act of self-love,” Ade said. “Every culture, every race, religion is capable of being homophobic.”

Ade also touched on their experiences dealing with the trauma that has come with being a person of color in today’s America, specifically on police brutality toward transgender people of color.

They hoped students understood no one is ever and should ever be alone in the struggles they’re going through. Ade added they hope if students feel rejected from their families, that they will find new, loving ones in each other.

“Family doesn’t mean who you came from. Your family are the people that you belong to, the ones who love you without restrictions, the people who nourish your sense of self-worth, the ones who show up again and again,” Ade said. “Those people are your family. The spaces you create together that are brimming with so much love and joy — that’s home.”

Brian Patchcoski, director for Penn State’s Center for Sexual and Gender Diversity, said Ade’s talk served as a poignant reminder to focus on more inclusivity in the LGBTQ community.

Patchcoski added that Thursday's conversation sparked discussion about individuals who experience the "highest levels of marginalization, hate and violence.

"These events are pivotal to not only educating and moving our culture at Penn State, but also supporting our students in them thriving in their narratives and who they need to be in the world,” he said.

Freddy Purnell, the president of the LGBTQA Student Roundtable and vice president of QTPOC, said it was important to bring someone like Ade to Penn State.

“I think it’s important for people to be seen. When people picture most trans individuals, it tends to be standardized white trans people,” Purnell (senior-biology) said. “It’s very important to show that there’s a diverse community of transgender, non-conforming people — and especially here at Penn State, too.”

Additional events planned as part of Transgender Awareness Month at Penn State include the Transgender Vigil in honor of those who have been killed because of anti-transgender and non-binary bigotry and violence, which will be held at 7 p.m. on Nov. 12 at the Pasquerilla Spiritual Center’s Worship Hall.

“I want to tell you, whether you know it or not, that you’re a miracle. You’re a burst of brilliance, a rejection of rigid ideas of gender and sexuality,” Ade said. “You’re a miracle because you’ve chosen to be yourself.”