Nittany Dance Project throws up the THON diamond at the end of their performance during the Penn State THON Talent Show on Jan. 22, 2023 in the Schwab Auditorium in University Park, Pa. 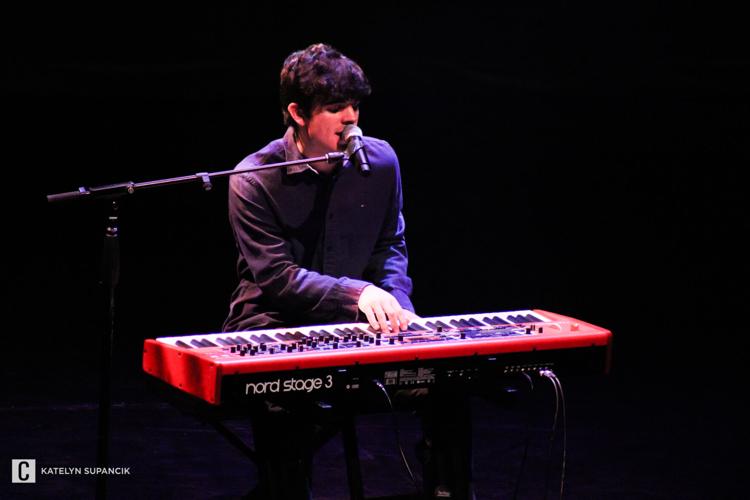 Joe Downs preforms a song during the Penn State THON Talent Show on Jan. 22, 2023 in the Schwab Auditorium in University Park, Pa. 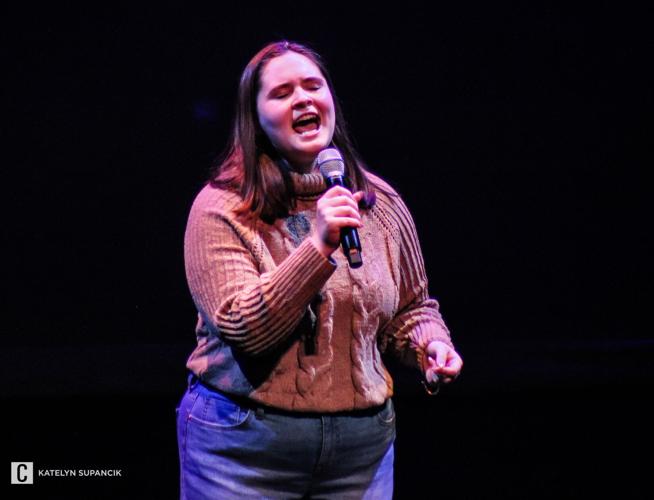 Alayna Smith preforms a song during the Penn State THON Talent Show on Jan. 22, 2023 in the Schwab Auditorium in University Park, Pa.

With less than a month until THON 2023, KCF Technologies hosted the fifth annual THON Showcase, allowing students to compete in a talent show to win credit for their organization’s THON total on Sunday night in the Schwab Auditorium.

THON is the world’s largest student-run philanthropy that aims to provide emotional and financial support to Four Diamonds families who have been impacted by childhood cancer.

Up next, Penn State’s Bollywood fusion dance team, JaDhoom, took the stage. The club has competed across the nation.

The show consisted of three solo singing acts — each representing a different organization.

Alayna Smith represented Eclipse, a THON organization, with her cover of “At Last” By Etta James.

Joe Downs switched it up by playing two songs — one on an acoustic guitar and another on the piano. He was representing his THON Dancer Relations committee.

“Getting to share [an original song] with a crowd is always very special to me, especially at an event like this,” Downs (freshman-data sciences) said.

Although Downs said he enjoyed being a part of the THON Showcase, he thought it was “a lot of fun” getting to watch everyone perform.

RêVe Dance Company performed a contemporary piece to “golden hour” by JVKE, followed by Blue in the Face’s a cappella rendition of “15 Minutes” by The Yeah You’s.

Nittany Dance Project, which was formed only last year, mixed its hip hop and jazz styles in a performance to a remix, containing “The Fresh Prince of Bel Air” and David Guetta’s “Hey Mama.”

During the 15-minute intermission, two THON captains hosted a round of Kahoot! where the winners could earn $200 to credit their THON weekend total.

Once the game was finished, the captains moved on to a random seat selection for $250 credit toward the organization of their choice. People scrambled to see what number their seat was, as the captains announced multiple winners.

To bring the audience back to the show after intermission was another a cappella group — Shades of Blue. The group sang its interpretation of “No Air” by Jordin Sparks.

Whiplash Dance Team danced to a mashup of songs by Destiny’s Child, Megan Thee Stallion and Dua Lipa. Gloria Santti, a member of Whiplash, called the Dance Team her “home” and was very proud of her team for doing this.

“I’m so pumped, and I’m so hype for THON weekend,” Santti (freshman-criminology) said.

Orchesis Dance Company performed “There Will be Time” by Mumford & Sons.

“It was so much fun to come out for THON and perform for an amazing cause, as well as just to perform with my best friends,” Mykut (freshman-biology) said.

Urban Dance Troupe brought the show back in time by dancing to the hits of the past decades — starting in the 1970s.

Before the judges presented the results, one THON representative from each performance participated in a Q&A session.

The winners of the talent show included:

After winning second place, Mykut said she thought it was awesome, especially because “this was all for THON.”

From waking up before the sun rises to leaving muddy equipment in the halls, freshmen in the Penn State Reserve Officers’ Training Corps progr…

Emily Muñiz is a greek life THON reporter for The Daily Collegian. She is a freshman studying journalism and marketing.