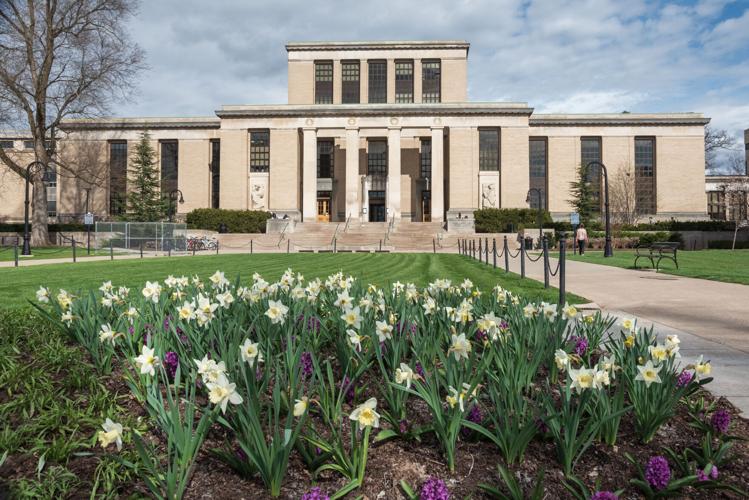 Flowers in front of the Pattee library on Thursday, April 14, 2022, in University Park, Pa. 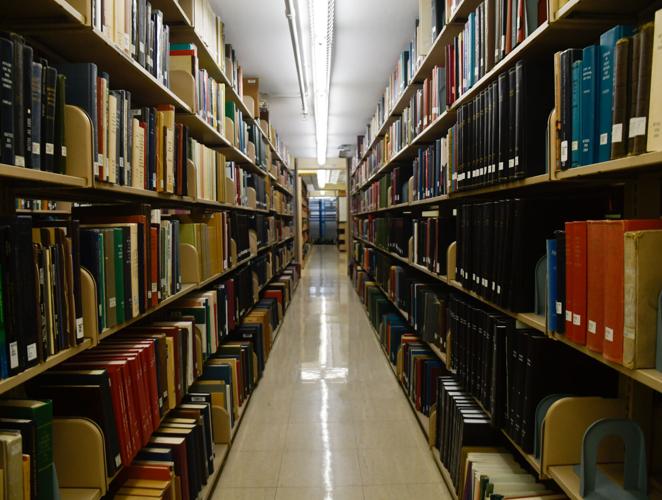 A view of the stacks in the Pattee and Paterno Library on Monday, March 28, 2022 in University Park, Pa.

Memorabilia and belongings of Ernest Hemingway, the celebrated author and Nobel laureate for his novella “The Old Man and the Sea” and author of many other works considered modern classics, have arrived at Penn State by way of a new collection.

A new collection of “correspondence, ephemera, galleys, manuscripts, photographs and artifacts” relating to the author was found in Sloppy Joe’s Bar in Key West, Florida.

Its contents came into the possession of Hemingway’s long-time friend Otto “Toby” Bruce and Bruce’s wife, according to the Eberly Family Special Collections Library.

The Eberly Family Special Collections Library purchased the collection in October 2021 after its contents were found safe from Hurricane Irma.

The Toby and Betty Bruce collection of Ernest Hemingway is now among the most important repositories of Hemingway artifacts in the country, alongside Princeton University Library and John F. Kennedy Library.

Sandra Spanier is an Edwin Erle Sparks Professor of English and women’s studies and the general editor of the Hemingway Letters Project, which has produced “a comprehensive scholarly edition of the author's some 6,000 letters,” according to The Hemingway Society.

“Because of the Hemingway Letters Project, I am always on the lookout for letters, of course, and I had met this man in Key West, Benjamin Bruce, known as Dink,” Spanier said, “and Dink Bruce told me when I first met him in 2004 that he had some Hemingway letters, and he’d be happy to let me look at them.”

Benjamin was Toby’s son, according to Benjamin’s obituary.

Spanier said she “had kept in touch with him over the years.”

“In 2017, I guess it was, [I] went to Key West for several days to sort of immerse myself in his collection,” Spanier said.

There, Spanier came into contact with Brewster Chamberlin, a Key West writer and historian and a friend of Dink, who showed her some of the material.

“Brewster handed me this Ziploc bag that said ‘1909, diary of trip to Ireland and Scotland,’ and I looked at it and said, ‘Wait a minute, he’s 10 years old, and he never went there,’ and so we started to look at it more carefully and realized he’s writing a fiction,” Spanier said.

The emergence of Hemingway’s lost first story didn’t come until the next fall, Spanier said, when Hurricane Irma “poised to wipe out Key West completely” along with all of the letters and writings Hemingway kept down there — but the materials were left “pretty much unscathed.”

Spanier asked Dink if the collection could be brought to Penn State where they would be “physically cared for and be protected.”

“Dink Bruce had told me that this collection was kept, basically, in a garage in Key West, which has a terrible climate for preserving paper. It’s humid,” Spanier said. “And he was saying, ‘I'm in my 70s, I don't really know what to do with all this stuff. I'd like it to be useful somewhere.’ And that's when I started suggesting to him that it would be a really good idea if these could come to the Penn State library.”

She said a principle reason for keeping the collection here is because it “would really be used.”

According to Spanier, the collection could be used in student projects and to aid the Hemingway Letters Project. She also said the university “has been bombarded with requests from researchers all over the place.”

According to Spanier, Penn State “has been on the map” when it comes to Hemingway studies. In fact, Spanier said one of her graduate professors, Philip Young, wrote the first book about Hemingway in 1952.

Young “had had his own little tangle with Hemingway” because the author “felt like he was being psychoanalyzed alive,” she said.

Spanier said Young invited Charles Mann, the rare books librarian for whom the assembly room in Paterno Library is named. Together, they published “The Hemingway Manuscripts: An Inventory” through the Penn State University Press in 1969.

“People don't often necessarily think of Penn State’s history in terms of the literary footprint it has, but it’s really huge in American literature,” Spanier said.

She described some items she deems the most significant of the lot, such as a “big blank book” with a to-do list, one of those activities being to finish one of his novels “The Sun Also Rises.”

“It’s just crazy to think here’s this guy, telling himself, ‘Oh, I gotta finish this book,’ which turns out to be like one of the greatest novels of the 20th century,” Spanier said.

There’s an outline of a novel that was never completed, “A New Slain Knight,” and through his letters, one can glimpse into his “parental side,” which “we don’t always see,” Spanier said.

As Toby drove Hemingway’s children across the country to meet Hemingway in Idaho, Hemingway addressed a letter to Toby to ensure his kids “brush their teeth” and “don’t catch a cold,” Spanier said.

There are also “several pages of his handwritten thoughts on death and suicide” where he meditates “about how maybe the best way would be to go off an ocean liner in the middle of the night,” Spanier said. Hemingway’s father would take his life two years after he wrote this, and Hemingway would die by suicide 35 years later.

Spanier described the collection as a “wealth of possibility” in terms of study.

As Head of Collection Services of the Eberly Family Special Collections Library, Lexy deGraffenreid was present when the materials arrived at Penn State on Oct. 5, 2021.

“The shipment showed up pretty early in the day, [and] we were all there to meet it,” deGraffenreid said. “We used a commercial carrier — a shipper that specializes in shipping, fine art and archival collections — so it showed up in perfectly great condition.”

Penn State students will get to cast their vote next Tuesday, many of which are for represen…

Once the materials were brought into a processing room in the library, they underwent the process of accessioning, “which is the formal work of bringing material physically and intellectually into the collections,” deGraffenreid said.

She said the attention on the library lately has been great.

“We have a lot of research or interest in the collection,” deGraffenreid said.

Despite the harsh conditions of both Key West and the hurricane, “this collection is actually in pretty good shape,” she said.

A “very small number of items” were identified as having concerns for preservation and were “sent immediately to the Conservation Centre to have them cleaned,” deGraffenreid said.

“One was a boxing album that had special housing made so that we could stabilize the album,” deGraffenreid said. “Especially some of the letters… are made on paper that might be acidic, called onion skin, which is a very, very thin paper.”

For deGraffenreid, the best part about being involved in the project as an archivist is helping to promote use and allow students and researchers to discover parts of Hemingway’s life.

“To have such an important collection come through the doors, and then to be able to make that available to researchers who were so excited to see it — I think that’s the best part,” deGraffenreid said.

Robert Elder is president and CEO of Outrider, a journalist and “kind of a Hemingway detective” who has been published in The New York Times, The Boston Globe and The Chicago Tribune.

He broke the initial story of the collection coming to Penn State in an article for The New York Times.

He said he “kind of fell backwards into” being fascinated with Hemingway and his works, especially since moving to Hemingway’s hometown — Oak Park.

“I was the editor of a newspaper called the Oak Leaves, which he delivered as a kid,” Elder said. “And so my first book was about the archives [of Hemingway] in Oak Park. Hemingway scholarship has sort of been like the mafia, they just keep pulling me back in.”

Elder said he learned “just how vast and rich and unexpected [Hemingway] continues to be” after visiting Penn State recently and seeing the collection for the first time in person.

“I think we know more about his life than any other human life just because of all the material that he’s left behind — that makes him fascinating,” Elder said. “He lived a truly amazing life and had an indelible legacy with the written word.”

He said it was “a complicated emotional response” to see the collection outside of the “mythic terms” the public has ascribed to the writer.

“But after you go through someone’s photo albums and you see them throughout the arc of their life, you realize it’s another human being who had a whole very rich life, outside of their fame,” Elder said, “and that's a really interesting experience.”

‘Dancing, singing’ in Beaver Stadium | What it’s like to work behind the scenes on game day

From volunteering to sell ice cream to acting as a security guard, Beaver Stadium employees work behind the scenes to ensure every fan’s exper…

For a project in her Advanced Multimedia Production class, Mila Sanina said one of the rubrics is to approach people who “do not look like you.”

Nathan Campbell is a music reporter for The Daily Collegian. He is a freshman studying English.