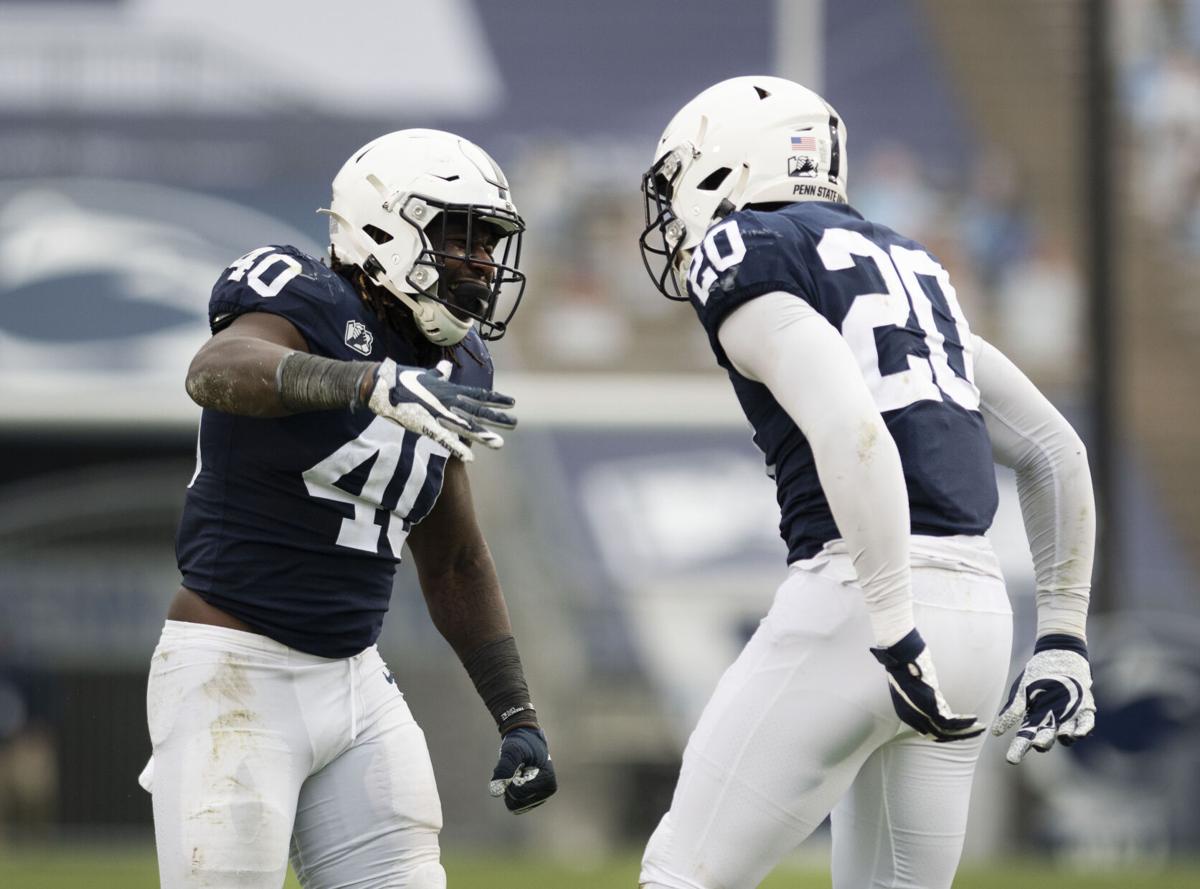 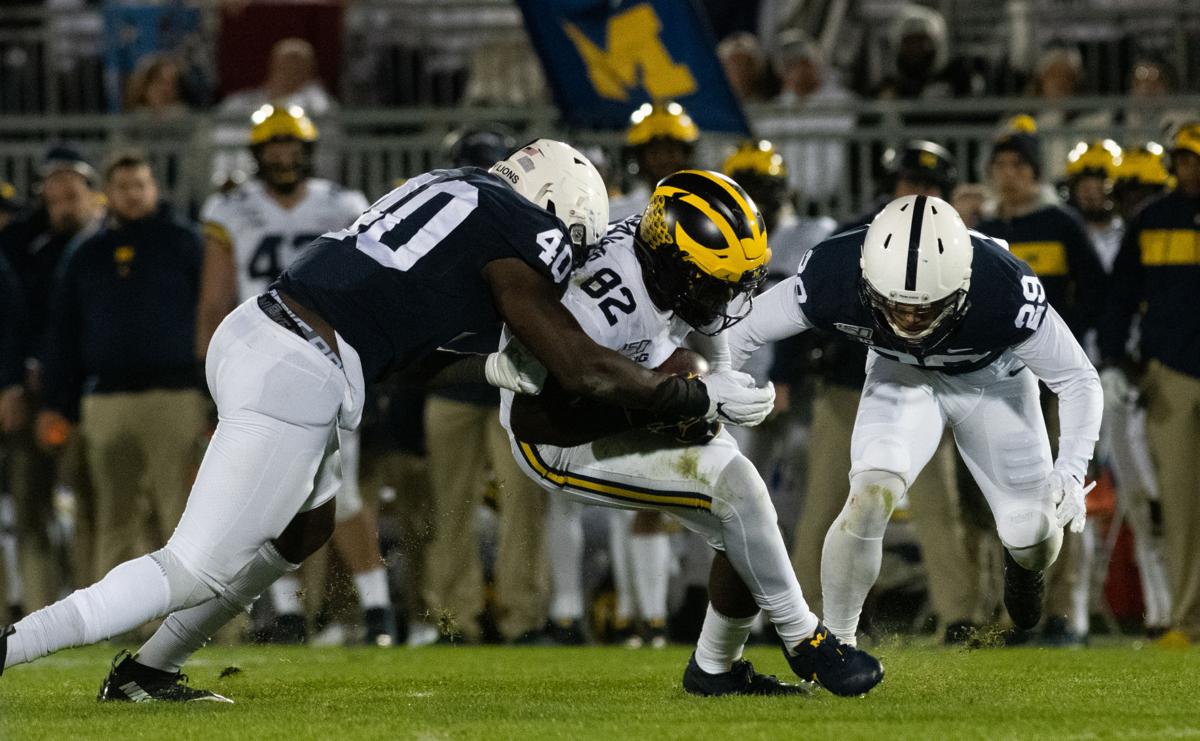 After three seasons at the linebacker position and one year as a Penn State captain, a position change may have been the last thing on Jesse Luketa’s mind.

The term “dual-threat” in football is most recognized for a quarterback who can use his legs as well as he can throw, but Luketa’s role as a dual-threat is coming at two of the most important defensive positions for the Nittany Lions.

While young, Penn State’s linebacker room is deep enough to allow Luketa to polish up his pass rushing abilities as a defensive end.

According to James Franklin, the coaching staff believes Luketa can fill “depth” in the defense, especially after the season-ending injury of projected starting defensive end Adisa Isaac.

“I would say probably more of his time will be spent at defensive end in training camp, just because he has such a foundation and history at the linebacker position already within the same scheme,” Franklin said. “So we want to get him to the point where he's really comfortable and effective in what we're going to ask them to do at defensive end.”

While Luketa’s situation is unique at this point in his college career, Penn State and longtime defensive coordinator Brent Pry have seen their fair share of defensive dual-threats over the years.

“Guys like Nick Tarburton and Cam Brown — those guys that are hybrid guys coming in. Brandon Smith to a degree,” Pry said. “[Luketa] will have the ability to have trades to both positions, and so we're able to maximize what Jesse can do well [and] maximize his assets by playing him some on the edge.”

For a guy like Brown, splitting time at both linebacker and defensive end seemed to do wonders for his ability to rush the quarterback.

By his senior year, Brown was viewed as a versatile threat in Penn State’s defense who could effectively rush the quarterback with but still hold down the fort in the middle of the field.

Luketa’s situation could be similar to Brown’s.

While Luketa has worked out as a defensive lineman this offseason, Pry said it is still a “one-two punch” at linebacker with him and Ellis Brooks.

In football or an everyday workplace, each individual has to buy into the culture and understand their role on the unit.

And just as a chef who has skills in more than one area of culinary success, Luketa’s experience and Swiss army knife versatility will pay dividends for the Nittany Lions this fall.

Luketa’s focus this offseason may have mostly been on improving his skills as a pass rusher, but he’s still right at the top of Penn State’s best tacklers.His 59 tackles in 2020 landed him at second most on the team.

The biggest concern is certainly Luketa’s rushing ability. In three seasons, he’s only combined for 3 sacks — 1.5 less than his counterpart Brooks has put up in the same three seasons.

While Luketa’s numbers have not suggested him as the greatest pass rusher, Pry seems confident in his captain’s abilities to rush the quarterback from the trenches.

“Jesse has always had very good rush ability. You go back to his film, and you look at the snaps where he's blitzing for us, and he's pretty hard to block,” Pry said. “He's got a good low-shoulder rush. We consider his rush ability a real positive for him.”

Luketa will likely still get a good number of snaps at linebacker in 2021, but due to his offseason workouts as a pass rusher, he could in fact become an even better one than what he’s put on film.

On top of playing ability, a veteran like Luketa with a solid knowledge of Pry’s scheme streamlines the communication and chemistry across the defense.

“There's a lot of things that, personally, I don't have to worry about whenever communicating back and forth,” junior linebacker Brandon Smith said. “I usually have to tell the defensive end ‘This is what you have to do,’ but since he's knowledgeable about both things, I don't have to particularly worry about that.

“It's a win-win situation as far as that comes to play.”

Whether Luketa finds himself at linebacker or defensive end for the majority of 2021 and beyond, his teammates and coaches don’t seem to be worried about how he will perform.

“Jesse’s up for any challenge you give him,” wide receiver Jahan Dotson said. “He's been literally in the lab every single day — whether it's his pass rush, noticing different things with receivers, whether they're in the slot or outside.

“Every little game he's trying to build on so that he can be the best version of himself.”

After rumblings of a potential interconference alliance over the past few weeks, a deal betw…

Former Penn State special teams star Blake Gillikin seems to be getting his chance at the next level.

Tuesday marked what will go down as a significant day in the history of collegiate athletics.