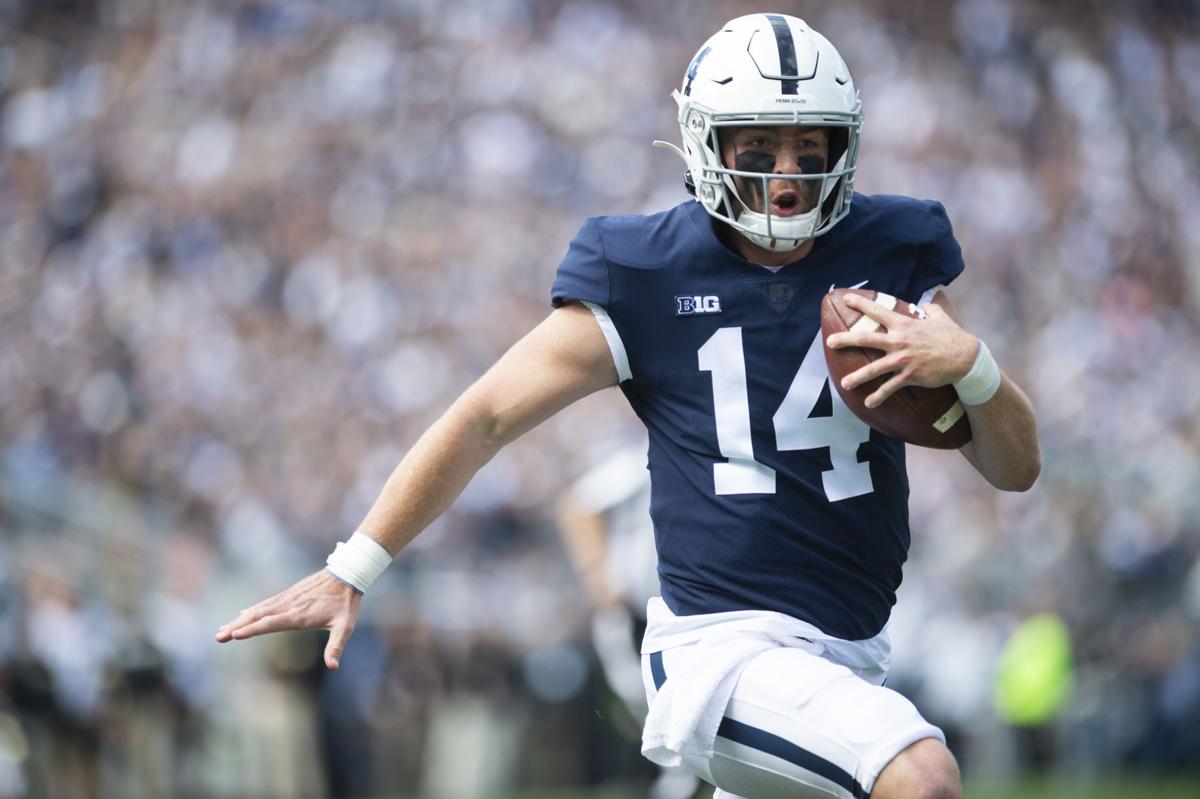 Quarterback Sean Clifford (14) scores a touchdown during the homecoming game against Purdue at Beaver Stadium on Saturday, Oct. 5, 2019. No. 12 Penn State defeated Purdue 35-7.

Members of the Penn State Football team wear the number 42 on their helmets in tribute to Michael Mauti who was unable to play during the game against Wisconsin on Saturday Nov. 24, 2012 at Beaver Stadium. The Nittany Lions beat the Badgers 24-21 in overtime. 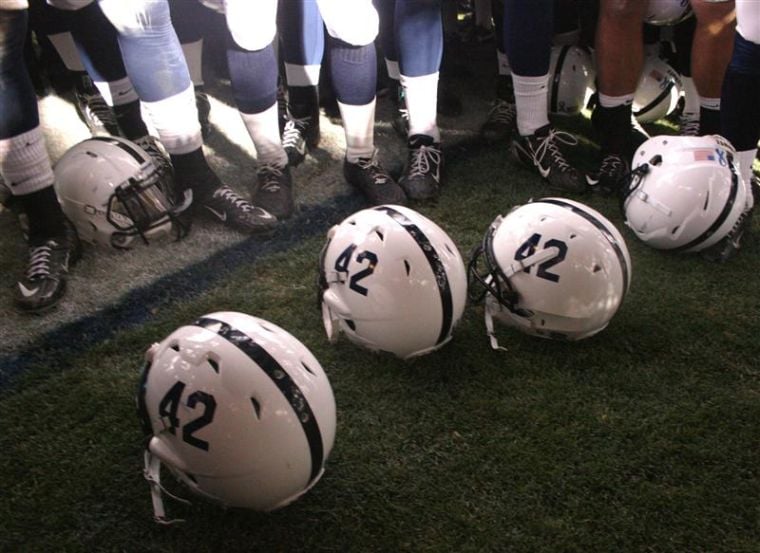 Helmets sit at the feet of the Nittany Lions as they sing the Penn State alma mater after their 24-21 overtime victory against Wisconsin on Nov. 24, 2012. The players all sported the number 42 on their helmets in honor of injured senior linebacker Michael Mauti. Mauti suffered a knee injury during the Indiana game on November 17 and was unable to play in the final game of the Nittany Lions' 2012 season. 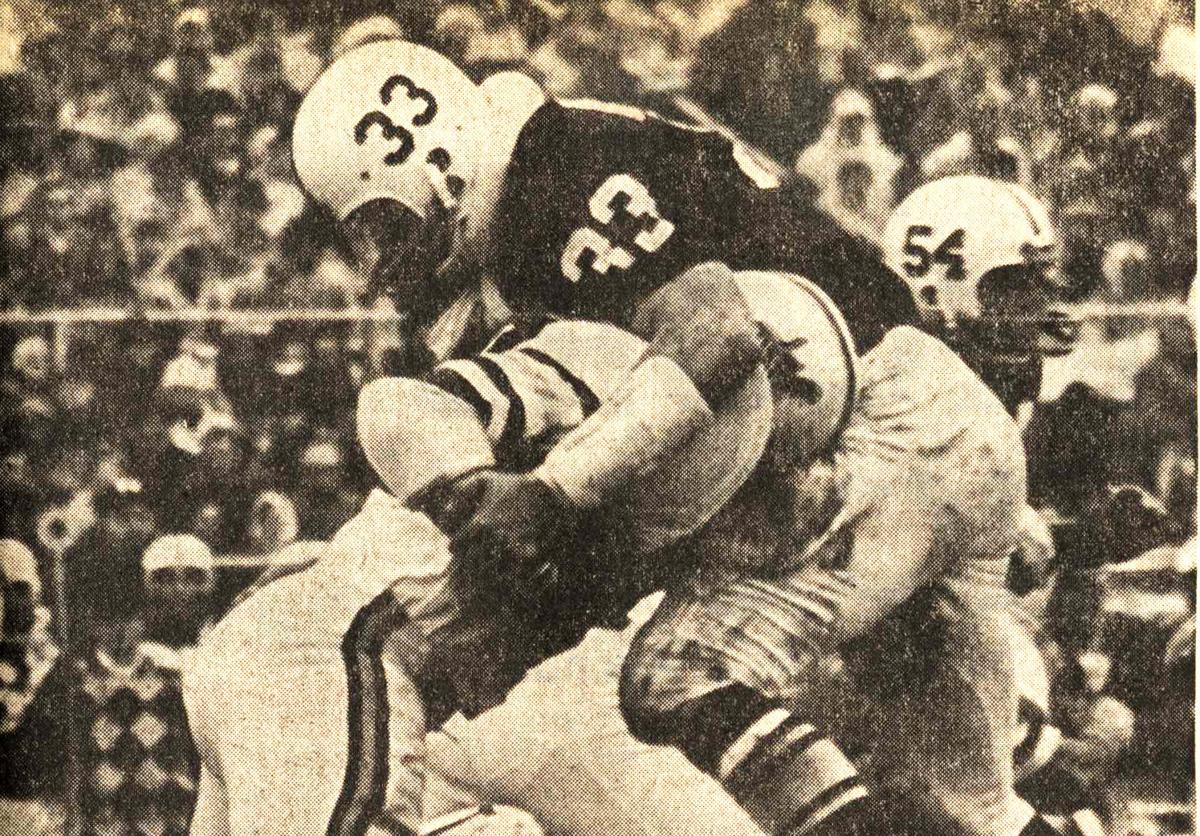 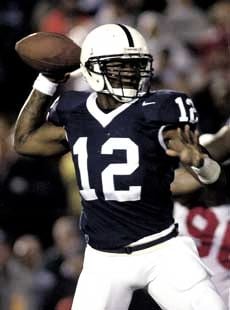 Michael Robinson throws the ball in Saturday's contest against conference rival Ohio State. Robinson may not have put up impressive stats on the day, going 11-of-20 for 78 yards, but he was still efficient. Robinson was not sacked and didn't account for a single turnover. 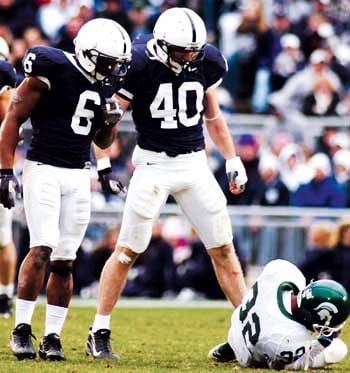 Penn State's Dan Connor (40) and Donnie Johnson (6) look down at Michigan State's Mike Cordell after Connor's tackle during the fourth quarter of the game on Saturday afternoon. Penn State won, 17-14. The Spartans' short passes exposed their receivers to hard hits from the Lions' linebackers and defensive backs. 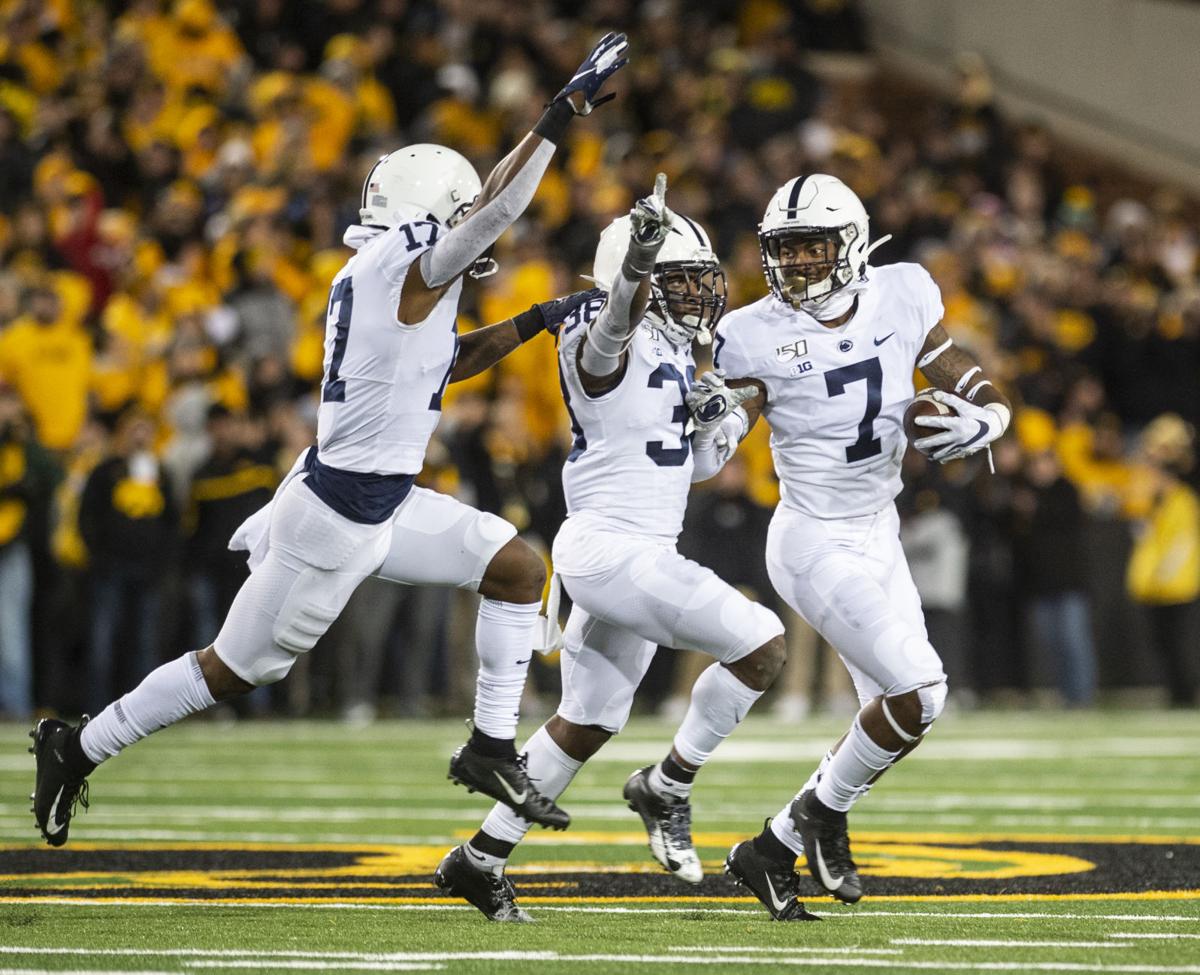 Penn State defense celebrates after safety Jaquan Brisker (7) caught an interception during the game against Iowa at Kinnick Stadium in Iowa City, Iowa on Saturday, Oct. 12, 2019. No. 10 Penn State defeated No. 17 Iowa 17-12. 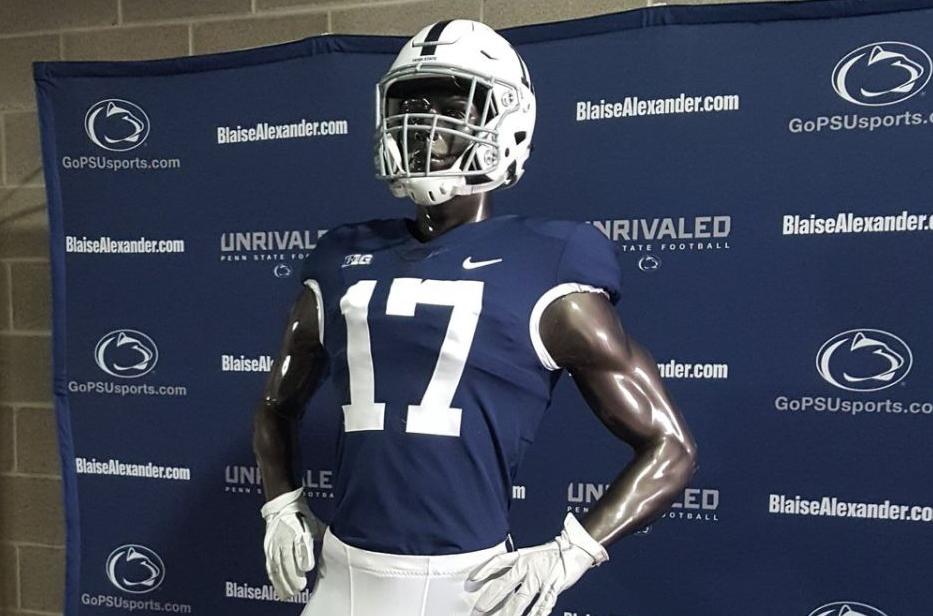 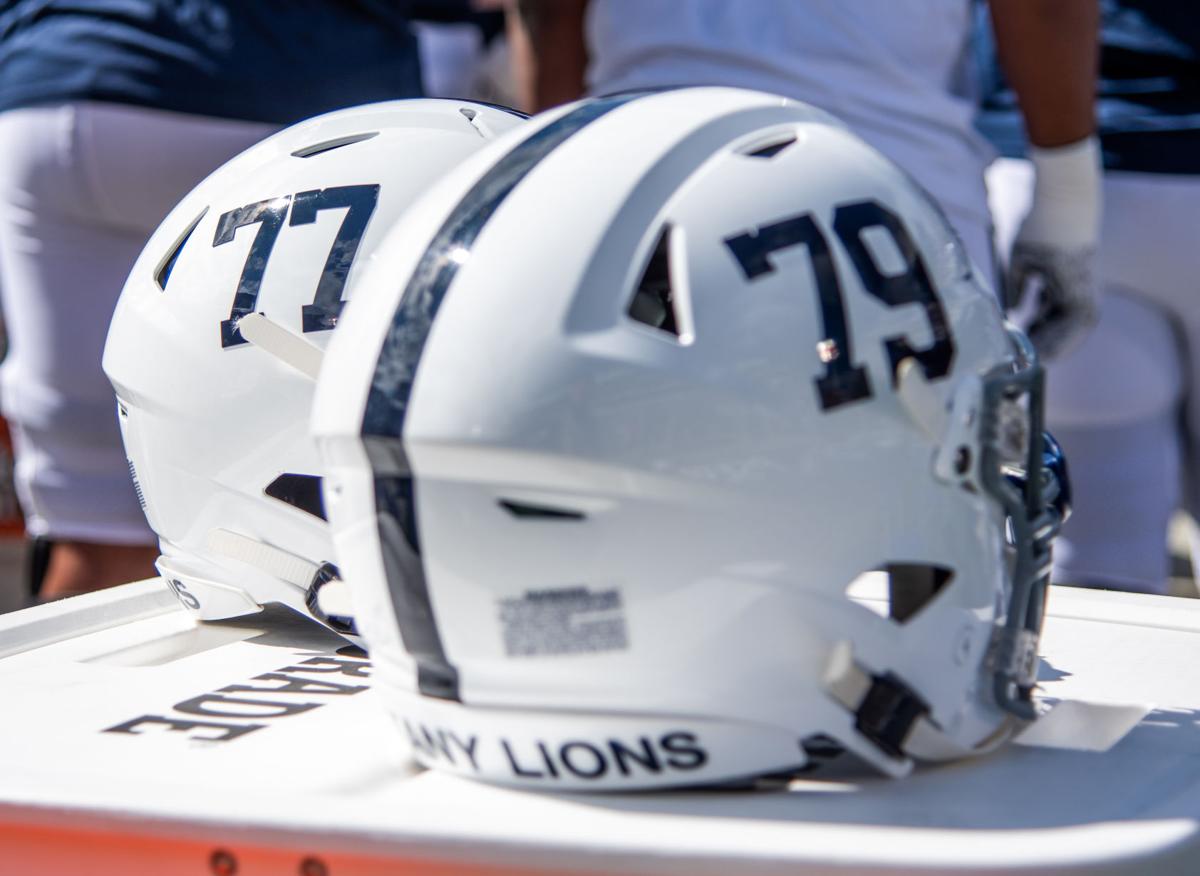 Penn State's special "generations of greatness" helmets sit on a cooler on the sideline during the football game against Purdue at Beaver Stadium on Saturday, Oct. 5, 2019. 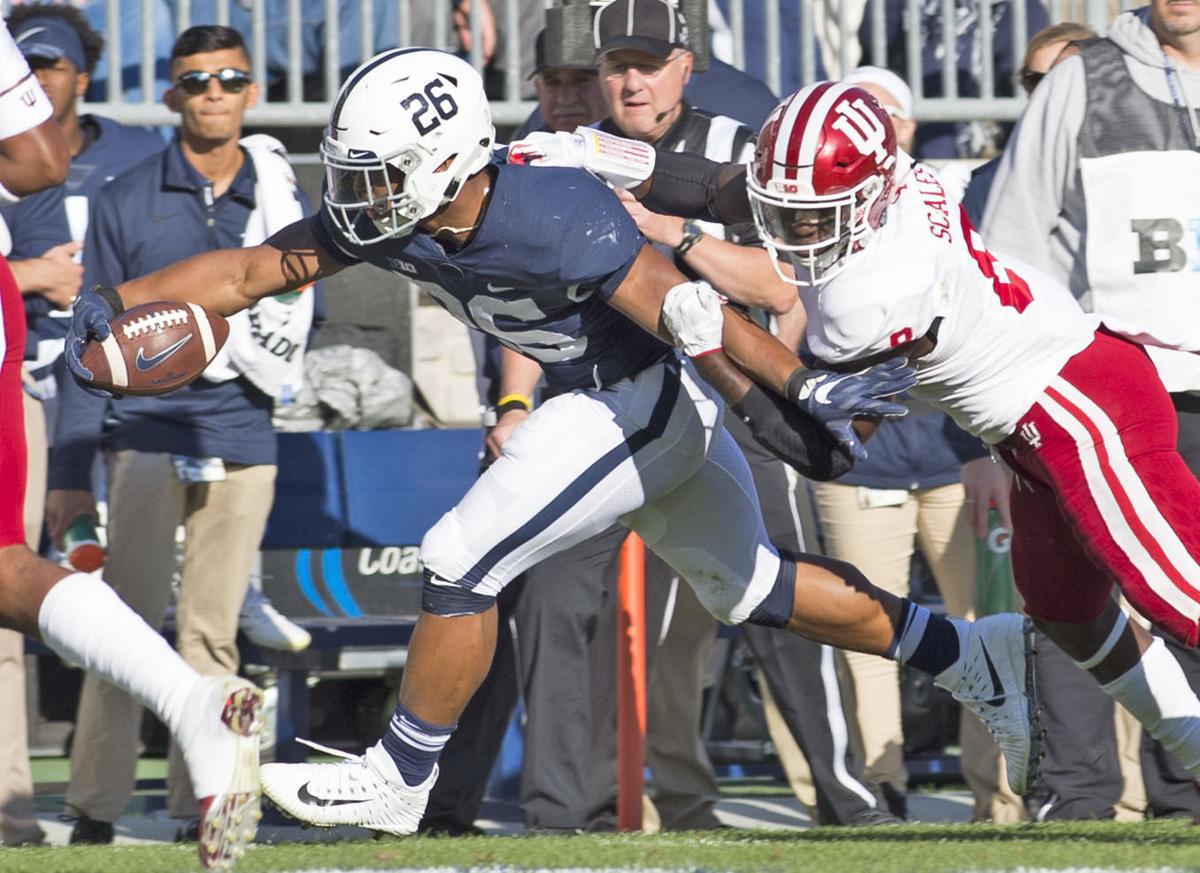 Saquon Barkley (26) gets tackled into Penn State's bench during the game against Indiana at Beaver Stadium on Saturday, Sept. 30, 2017. Penn State leads at halftme 28-14. 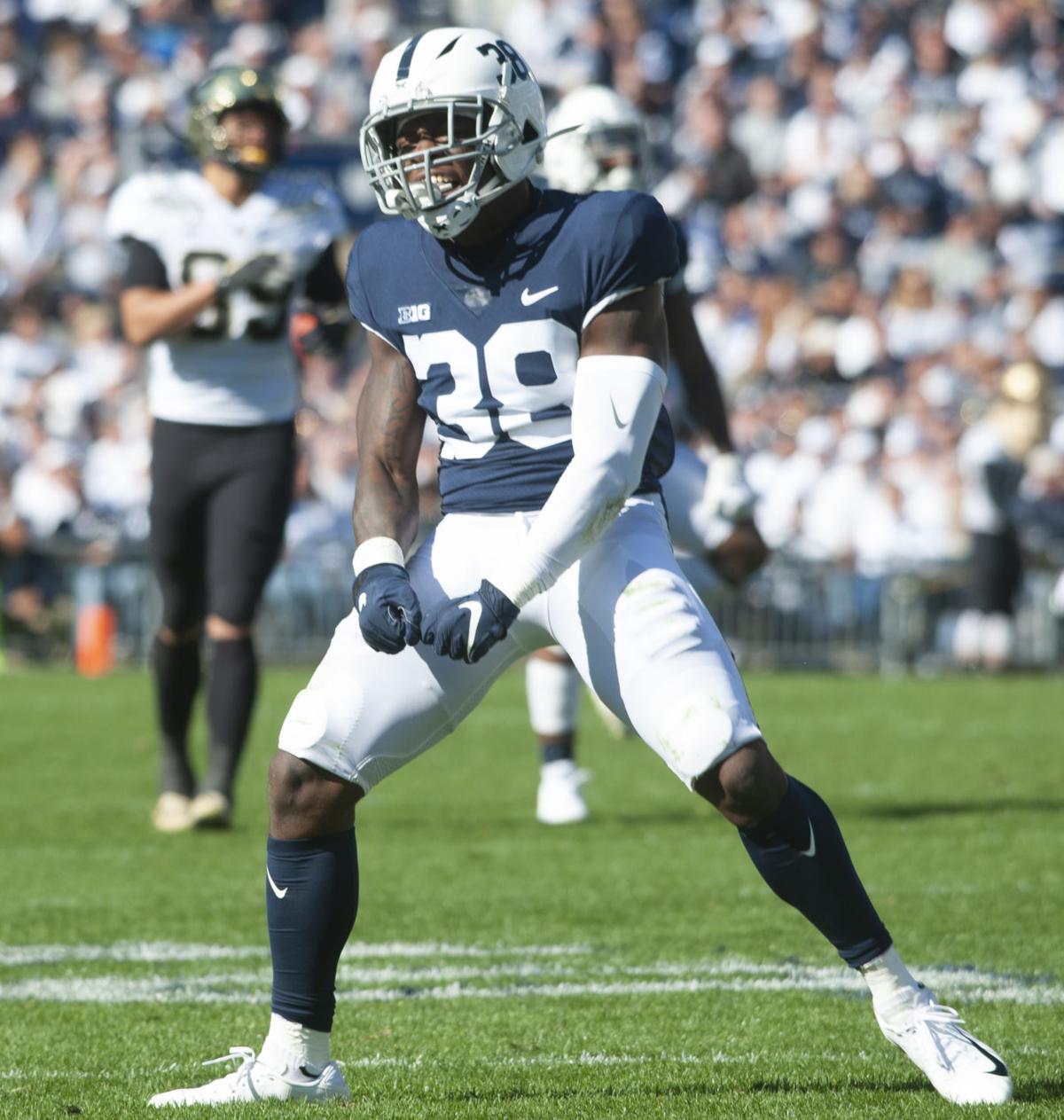 Penn State has become known for the simplicity of its classic uniforms.

By unveiling a new throwback in 2017, it created a storm on social media. Anything down to changing the color of the laces on the cleats would get people talking.

The saying ‘black shoes, basic blues, no names, all game’ is featured in the team’s hype video every season.

The Nittany Lions have included a few subtle differences over the years, however, so here is a look at five of the best looks Penn State has worn.

Bill O’Brien changed many things in his short term as the head coach at Penn State and should receive a ton of recognition for what he did for the Nittany Lions’ program.

One of the biggest changes he made, however, was adding names to the backs of the jerseys for the first time in the history of the program to honor the players who decided to stay with the program, despite the sanctions from the NCAA.

This caused a wave of reactions from some Penn State fans, but the uniforms changes were not done there in the 2012 season.

Michael Mauti, who became the leader and face of the 2012 Penn State team, suffered a season-ending injury and wasn’t able to play on senior day against Wisconsin.

This led to an idea from defensive tackle Jordan Hill.

Hill approached O’Brien on Monday before the game and suggested that the team honor Mauti by all wearing Mauti’s number on one side of their helmets.

Equipment manager Spider Caldwell managed to keep the stickers a surprise until the players entered the locker room right before kickoff.

Penn State ended up winning the game against Wisconsin in overtime as a storybook career came to a close for a group of seniors that will forever be remembered by Penn State.

These uniform changes, with the names on the back and Mauti’s number on the helmets, deserve a place on this list as it truly represented a unique era in Penn State football.

One of Penn State’s most iconic and classic looks came when two of the best players to ever suit up in blue and white played in Happy Valley,

For three years, Penn State wore numbers on its helmet and combined it with a gray facemask for a great combination that added to the simple, classic look of the uniform.

These uniforms also had a big inspiration on the “Generation of Greatness” uniforms, which are Penn State’s current throwback uniforms — and don’t worry, they are on this list.

Jack Ham and Franco Harris both rocked these threads as Penn State went 28-6 in these three years under Joe Paterno.

Other than the helmet, these uniforms were as plain as you could get for Penn State with a plain blue jersey, the classic block numbers and plain white pants.

One of Penn State’s most iconic looks has come and gone multiple times throughout its history but was most recently seen in the 2010 season.

This uniform has a simple, traditional helmet with no numbers and a blue facemask.

The pants are also just plain white with no stripe to be found.

The magic of these, however, comes in the jersey.

This simple pop of white looks exceptional on the home uniform and Penn State wore these for many classic moments including the 2005 season and the 2008 season.

These uniforms are synonymous in my mind with players like Michael Robinson, Tamba Hali and Paul Posluszny, just to name a few Penn State legends to wear this version of Penn State’s home uniform that has come and gone multiple times throughout the decades.

First displayed in 2014, Penn State’s current away uniform is clean.

It’s about as simple as it can get, but it sure does look good under the lights.

Penn State wears all white. The only pop of blue comes from the helmet, the numbers and the Penn State logo on the crest.

Penn State rounds out the look with classic black cleats.

Most players rock these with all-white accessories, and the look is crisp.

There is beauty in the simplicity of this look and how it pops against the grass and the other team’s uniforms, especially when the game is being played at night.

If Penn State is ever allowed to wear white cleats with this uniform, it would be the ultimate look for the Nittany Lions.

Penn State has also worn this look without any stripes on the jersey or pants multiple times in its history but brought it back in 2014.

The most recent change to Penn State’s uniforms is the best, and there is an argument that these beauties should be the Nittany Lions permanent home uniforms.

Penn State unveiled an alternate in 2017 — the only way it can — by not changing much.

The Nittany Lions combined a bunch of looks throughout the history of the program and combined them in one uniform, and the result was perfect.

The numbers on the helmets come from the 1959-61 and 1967-74 teams and the look is exceptional with the blue stripe down the middle.

Penn State also has gray facemask for the game, which they donned from 1970-72.

The numbers are a throwback block style that Penn State wore throughout the 1950s and early 1960s.

The white stripe returns on the sleeve of the jersey, the Lion Shrine is featured on the crest, and the socks are just beautiful.

The pants also have the return of the blue stripe, but the biggest changes come from the cleats.

Penn State wore white cleats once in its history, the 1979 Sugar Bowl, the National Championship game where Penn State lost 14-7 to Alabama after a goal-line stand by the Crimson Tide at the end of the fourth quarter.

The white cleats complete this ‘Generation of Greatness’ uniform, a look that should be a staple in Beaver Stadium at least once a year.

The ‘Wild Dogs’ have a new leader in John Scott Jr., but the coach isn’t expecting much to change as far as the production of the unit.

Coming off a year filled with winning basketball and national recognition, Penn State has taken the next step toward becoming a respected prog…

With just eight seasons completed at the Division I level, Penn State has accomplished a lot in such a short amount of time.

Ben Ferree is a sports columnist for The Daily Collegian. He is a senior majoring in broadcast journalism.