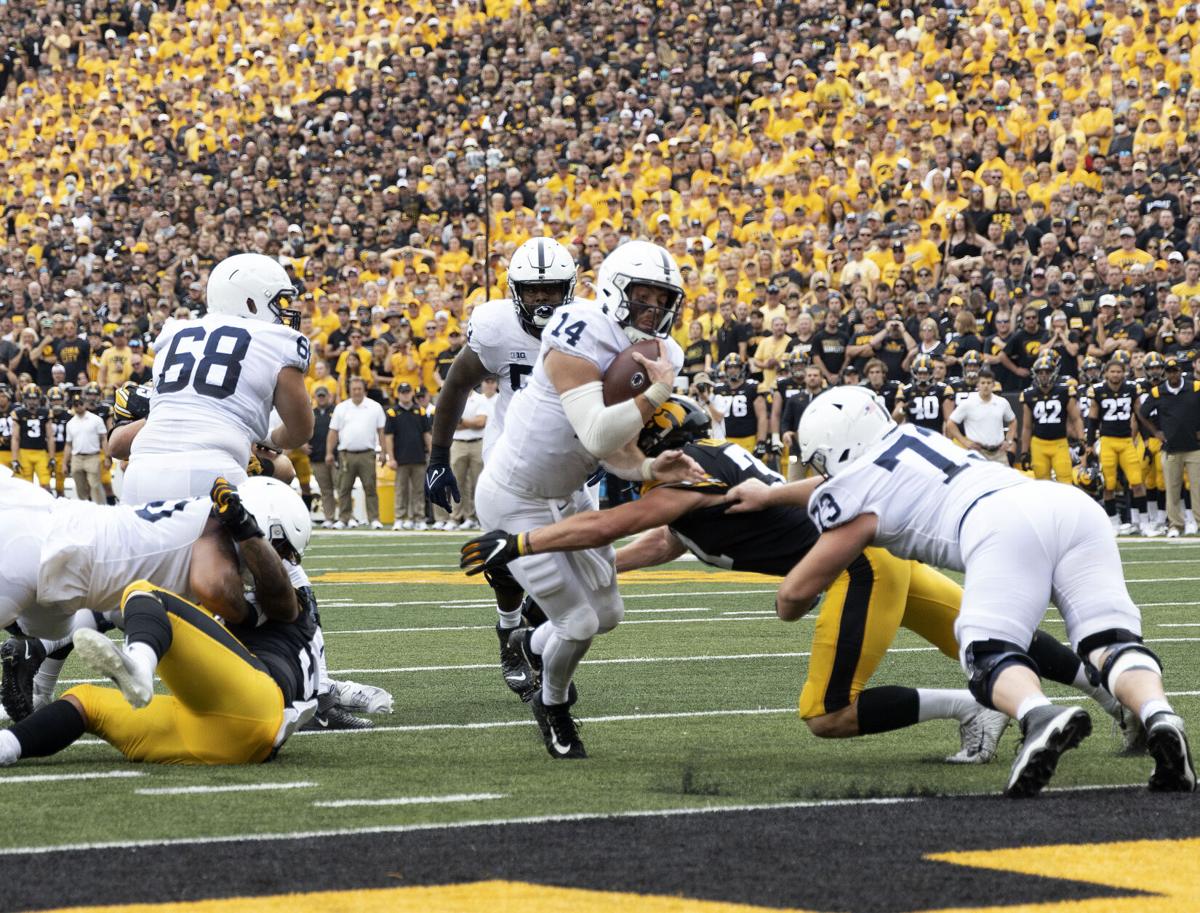 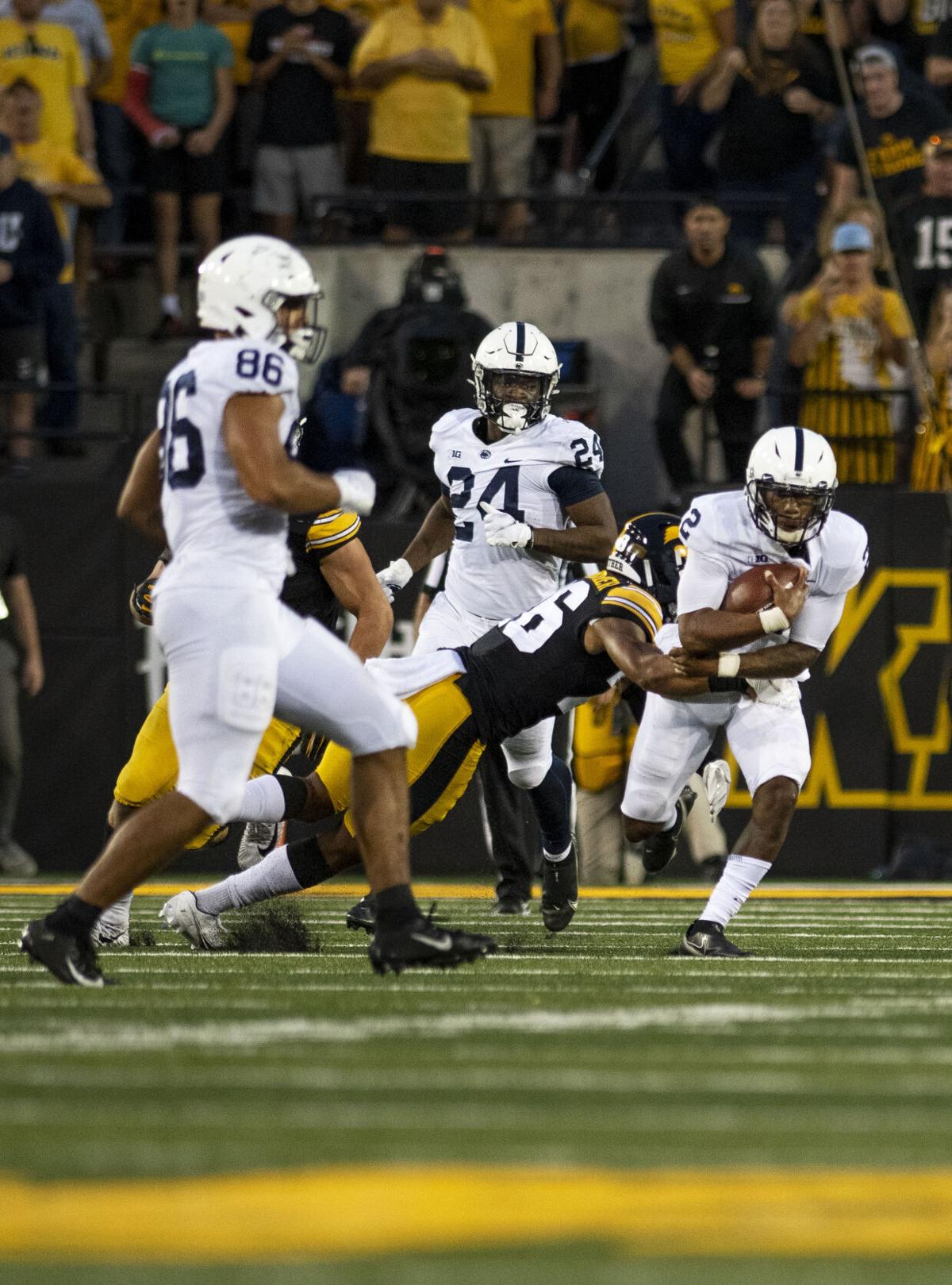 At this time last year, Penn State fans may not have had the same reaction to Sean Clifford getting injured as they did Saturday night.

He’s been revitalized as a quarterback, showing much more consistent play and commanding respect from fans and teammates alike.

When he went down with an injury early in the game against Iowa, it undoubtedly took the wind out of the Penn State offense’s sails.

Redshirt sophomore Ta’Quan Roberson stepped in his place, and the offense sputtered for rest of the night.

There were false starts galore, there were no explosive plays and there was no identity for the Nittany Lions’ attack.

Roberson finished the night with 34 passing yards on 7-for-20 passing, including a pair of interceptions.

After the game, he met with the media on the field.

“I just feel like it’s something that we have to do,” Roberson said following Penn State’s 23-20 loss to Iowa.

Fans will — and already have — place much of the blame on Roberson for his performance in the game. Among a million other factors Saturday, he’s the first to say he needs to be better.

“Yeah, I do,” Roberson said when asked if he felt a sense of responsibility. “But then again, it’s a team game. Come back in the building tomorrow, and let’s work.”

The backup quarterback certainly didn’t play his best football in relief against the Hawkeyes, and the lack of offense in the second half played a major factor in the way the game turned out.

It’s hard for his teammates to expect much from a quarterback whose first meaningful college football snaps come in the hostile environment of Kinnick Stadium with fans breathing down his neck, though.

“I honestly feel like [Ta’Quan] didn’t do terrible for his first game. He was just put in really funky situations,” offensive lineman Rasheed Walker said. “It’s already hard enough to play here with these crazy fans. I think Ta’Quan was ready. What he showed me today, I’m really proud of him. I feel like he came in and just tried his best.”

Following the loss, the team rallied around the young gunslinger.

“We surrounded him,” wide receiver KeAndre Lambert-Smith said. “It don’t matter how he played. That’s still our teammate at the end of the day. That’s our brother. We go to war with him, and we got his back 100%.”

Roberson made a few nice plays late in the game with his legs to extend drives, but first downs were few and far between for Penn State.

The entire offense knows it needs to be better and support the frontman of the group, too.

“We’re making sure he keeps his head high,” Lambert-Smith said. “He ain’t gonna be walking with his head down.

It’s unclear just how serious Clifford’s injury is, but there’s a possibility Roberson will need to be the lead man for the Nittany Lions for an extended period of time.

While Clifford takes the majority of snaps in practice and has all season, spending time as his understudy and taking “mental reps” is a “huge key” for Roberson.

The two have spent plenty of time together during training camp and practices, and the relationship they’ve built carried over when Clifford left the game.

“He was telling me stuff that he’d seen that I didn’t,” Roberson said. “He would just keep motivating me. Next play mentality.

“Since I’ve been here, Sean took me under his wing. We have a really cool relationship and a really close bond.”

Clifford joined safety Jonathan Sutherland this season as the only players in Penn State history to be nominated as team captains three times.

Losing someone who has that level of impact on the team can be devastating, but the rest of the offense noticed how important it is that Clifford stayed locked in even after the injury.

“He stayed in the game,” Lambert-Smith said. “[There wasn’t a] change just because he wasn’t playing. We fed off that.”

The Penn State offense was finding its identity this season under Clifford. A major wrench was thrown in their plans when he went down Saturday night.

Roberson struggled, but every member of the Nittany Lion offense — including Roberson himself — knows there needs to be a step up from the display in Iowa City, and the pair of quarterbacks will be instrumental in making that happen no matter who’s on the field..

With true game action now under his belt, it’s a chance for Roberson to take more confidence into his next act.

“I believe it will get easier. [I’ll be] more comfortable,” Roberson said. “[I’ve] definitely gotta build off this, use this as fuel and just keep getting better.”

Penn State football drops to No. 7 in latest AP Poll

After Sean Clifford’s second-quarter injury kept him sidelined for the rest of Penn State's matchup with Iowa, all eyes were drawn to backup T…

Let’s be frank, Penn State lacked rhythm on the offensive side of the ball following Sean Clifford’s second-quarter exit.