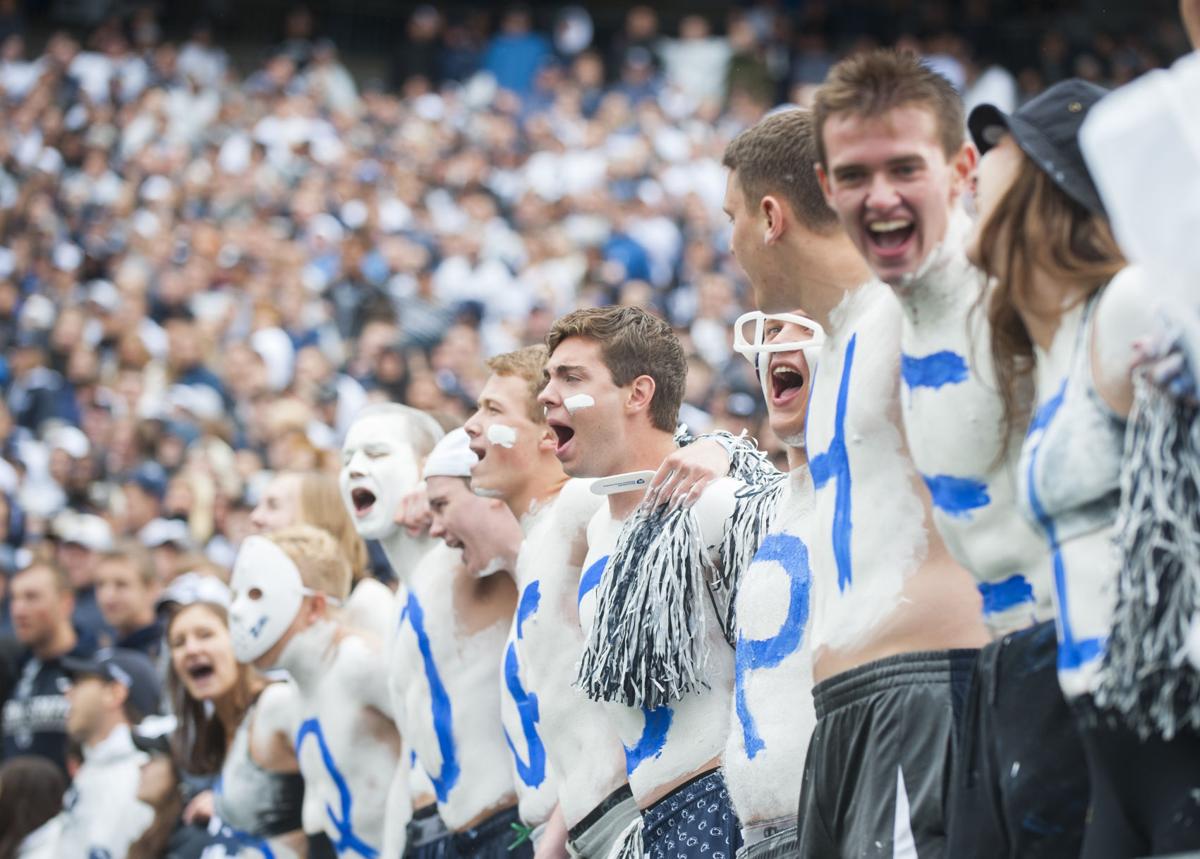 Penn State students sing the Alma Mater before the football game against Akron at Beaver Stadium on Saturday, Sept. 2, 2017. 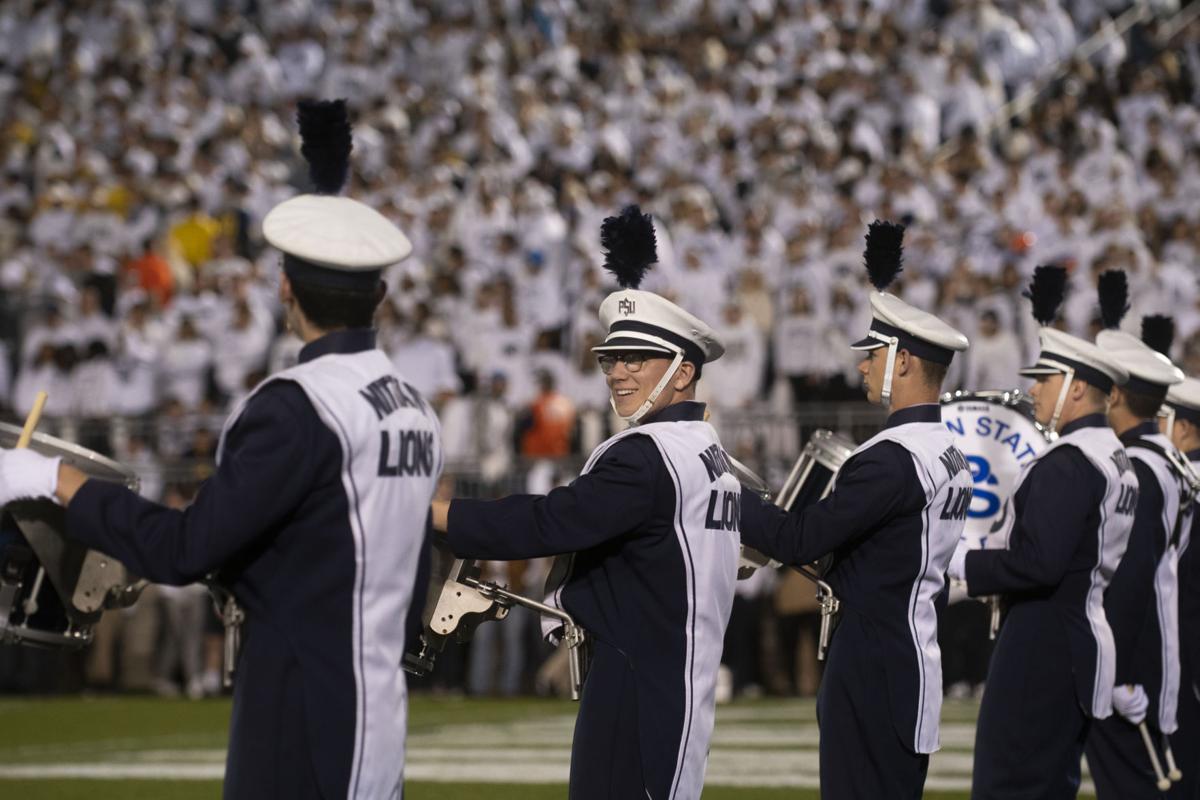 The Penn State Blue Band takes the field before the game against Michigan at Beaver Stadium on Saturday, Oct. 19, 2019. Penn State defeated Michigan 28 -21.

Penn State football season is right around the corner, and the first fan attendance in two years comes with it.

However, that means there’s two whole classes of students who haven’t yet experienced a Saturday showdown in Beaver Stadium and will need to learn the classic chants and cheers that fill the student section.

Here’s a look into each stadium tradition and how to keep yourself afloat on that first Saturday.

Prior to every home game, the Blue Band performs a medley of classic songs Penn State fans have enjoyed for decades.

Have no fear if you’ve never been to a game, though. The lyrics to these songs are often projected onto the video board, and most songs only have a couple of iconic lines that students belt at the top of their lungs.

Nevertheless, an introduction to these traditional pregame jams won’t hurt, so here’s the typical setlist for the Blue Band’s pregame performance.

As the band makes its way onto the Beaver Stadium grass, it plays Lion Fanfare, a song in which the crowd participates.

The drum major proceeds to run down the center of the field and does two front flips into a split, once in each end zone, while the band proceeds farther onto the field.

While many don’t know every line to “Victory,” the second to last is a necessary line to memorize.

The most memorable part is the classic “WE! ARE! PENN! STATE!” toward the end of the song, which essentially finishes the song off.

There’s not much to worry about with this song, but be prepared for that classic “We are” chant.

“Okay fans, pick up the beat and sing along to ‘Fight On, State!’”

The song title pops out from this classic line from the Beaver Stadium announcer.

All fans sing along to this song, so be sure to review these lyrics ahead of time to be prepared for one of the more upbeat songs in the pregame show.

You may not have known your high school alma mater by heart, but it would be beneficial to learn “Dear Old State” prior to the commencement of football season.

Sung during the football pregame show and after the final whistle blows at the end of every Penn State sporting event, the alma mater claims residency at every athletic venue across University Park.

Make sure you’re prepared for the quiet singing of “When we stood at childhood’s gate” and the shouting of “May no act of ours bring shame.”

And if you feel unprepared for these components of the alma mater, don’t worry — all the upperclassmen have been in your shoes (or still may be there themselves).

Nevertheless, you’ll catch on eventually and enjoy the traditional singing of the Penn State alma mater.

While it may look strange from the student section in the south end zone, the view from either side of the Beaver Stadium bleachers is breathtaking.

While the band plays “The Nittany Lion,” it spells out LION twice, facing each way in Beaver Stadium so each fan has the chance to see it right side up.

For the song itself, only two lines are key to passing the lyric test and both come at the end of the song — “PENN! STATE! Forever, molder of men (and women), FIGHT! for her honor — FIGHT! — and victory again.”

Now is when the crowd prepares for the Nittany Lions to enter the field.

The band parts ways and makes a lane down the center of the field, leading from the south end zone gate where the team enters from, and you’ll hear the announcer yell, “Are you ready for Penn State football?”

Then the band begins playing again.

You’ll yell out each letter of PSU at distinct parts of the song and then put it all together with “LET’S! GO! P-S-U!”

Do this twice, then yell “TEQUILA” at the end with your fellow students.

Following this song, direct your attention to the video board for the pregame hype video, which encapsulates highlight reel plays from current Nittany Lions and iconic moments from teams past.

Whether you recognize all of the major moments shown throughout the hype video, you’ll begin to sense loads of excitement building up toward the next round of songs before the Nittany Lions make their way onto the field at Beaver Stadium.

This next song lineup can include multiple song combinations, but let’s focus on the most popular.

After the conclusion of the hype video, you’ll hear “Power” by Kanye West erupt through the Beaver Stadium speakers and from the mouths of every fan in attendance.

As the team is shown making its way from the locker room to the field, the crowd calms down as “In the Air Tonight” by Phil Collins plays.

The crowd will sing along until after the classic drum sequence is played, and the team entrance begins.

“Zombie Nation” blasts through the speakers and the crowd screams “WE! ARE! PENN! STATE!” as James Franklin and the captains emerge from arm in arm to lead the team to the field.

The team takes in the unrivaled atmosphere of thousands of fans chanting its school name then runs into the field.

This sequence is a staple of a Beaver Stadium Saturday, as it plays for each entrance and after every touchdown.

WE ARE… PENN STATE

Now that both teams have entered the stadium and the coin toss occurred, the classic call and response cheer begins.

Set off by cheerleading waving massive flags in the south end zone, one side of the crowd shouts “WE ARE” and the other side responds “PENN STATE.”

The cheer doesn’t have a set number of times it’s repeated, but the cheerleaders prompt the crowd to end the cheer by holding up signs that say “THANK YOU” and “YOU’RE WELCOME.”

You can usually hear this call in the streets of State College and in every public setting when you’re wearing Penn State gear, and it’s almost time to shout it on one of the biggest stages in college football.

Typically, only students participate in this tradition, so pay attention.

After every Penn State touchdown, students are hoisted up and tossed in the air one time for every point Penn State possesses. So if Penn State opens the scoring with a touchdown, a student will be thrown seven times.

Hit the gym now to prepare your arms for a blowout win or prepare to risk your safety and be thrown in the air.

If you ask any Penn State football fan about the atmosphere inside Beaver Stadium, chances are they’ll mention one of countless classic songs that are staples to every game day.

But, some of the most common songs you’ll hear are “Year 3000” by the Jonas Brothers, “Seven Nation Army” by The White Stripes, “Livin’ On A Prayer” by Bon Jovi and “Sweet Caroline” by Neil Diamond.

In the latest episode of the Collegian Football Podcast, our Justin Morganstein and Alexis Y…

Alexis Yoder is a football reporter for The Daily Collegian. She is a junior majoring in broadcast journalism with minors in sports studies and Spanish.