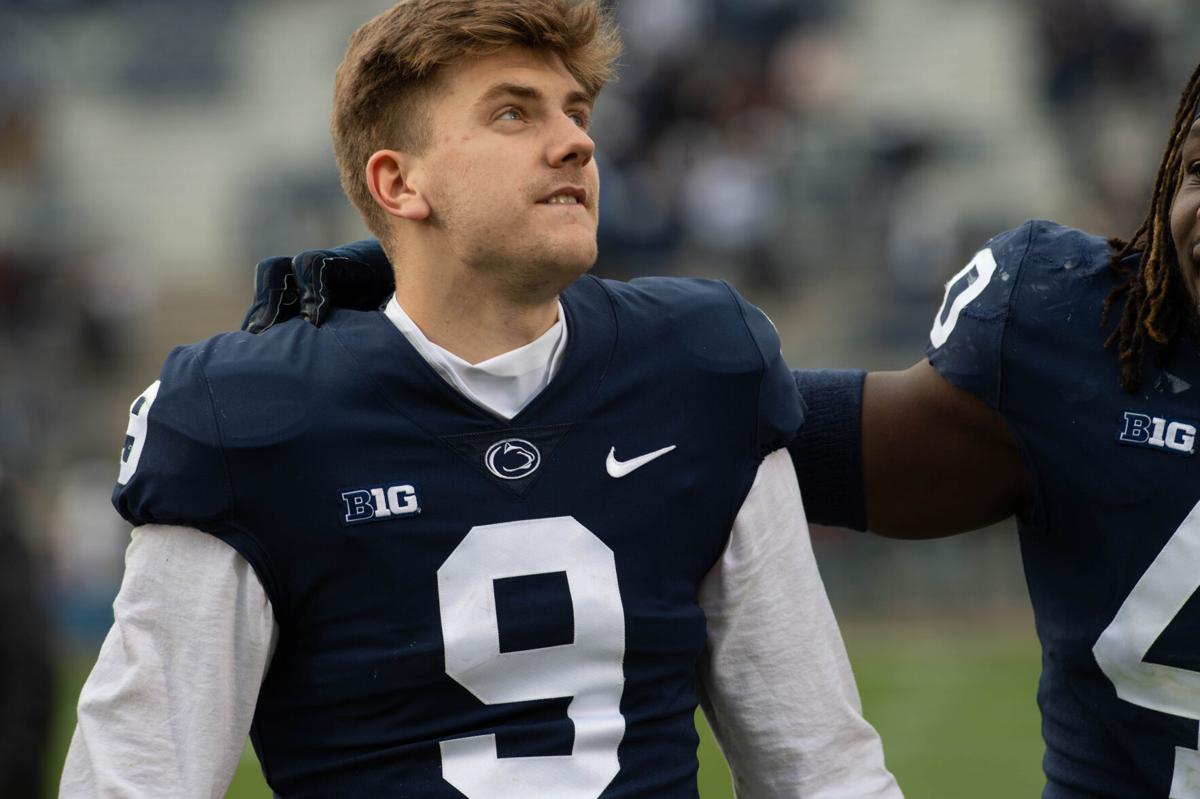 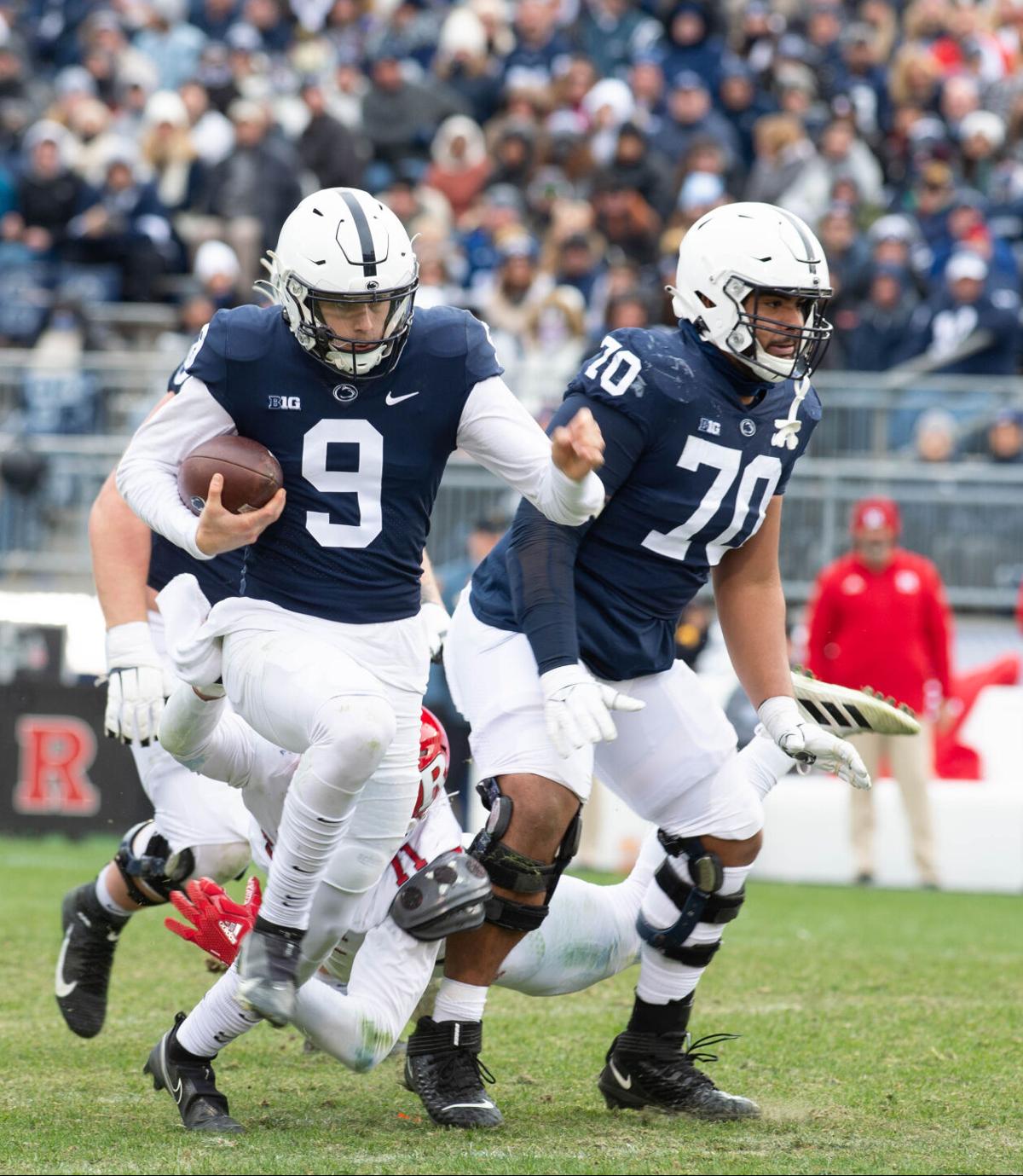 In the 2016 TaxSlayer Bowl, Penn State’s three-year starting quarterback Christian Hackenberg, No. 14, was replaced by a redshirt-freshman named Trace McSorley, No. 9, when Hackerberg exited with an apparent injury.

While the Nittany Lions ultimately lost the game by one touchdown, McSorley’s two-touchdown performance to put the blue and white back in competition issued the beginning of a new era.

On Saturday, similar circumstances unfolded when Sean Clifford, a three-year starting quarterback who wears No. 14, was replaced by Christian Veilleux, a true freshman who wears No. 9, when Clifford left the game in the second quarter.

Having already dealt with sickness throughout the past week, James Franklin said he didn’t even know if Clifford would be able to play by any means when he didn’t trot onto the field for pregame warmups.

“The lady from TV asked me... and I go ‘I don’t know,’” Franklin said. “I had to ask the doctors and trainers where he’s at because he never came out for warmups.”

By the time Clifford left the playing field after leading Penn State to just 34 yards of total offense, one first down and no points, it was clear he likely wasn’t at 100%.

According to Franklin, Clifford “wasn’t able to go anymore” when he came to the sidelines, thus transitioning to Veilleux, one of two other healthy options at quarterback.

In his first playing time as a Nittany Lion, Veilleux was nothing short of excellent — completing 15 of 24 pass attempts for 235 yards and three touchdowns while also rushing 10 times for 36 yards.

“I was proud of him for just how poised he was today,” Franklin said. “Made some plays with his legs, made some big-time throws, made some checks.”

Arguably Veilleux biggest play of the game was his first career touchdown, which he threw to none other than Jahan Dotson in what was likely the senior wide receiver’s last game in Beaver Stadium.

“He knew we had man-to-man, he checked it, which is something we work on every Sunday,” Dotson said. “He did a great job doing that, rolled out, created some space to deliver the ball on time to the perfect place.

“That’s just a testament to who he is… very poised.”

A lingering question following Veilleux’s performance, however, is why it took this long for him to take the field when Penn State likely could’ve used him when Clifford was banged up in its two-straight losses to Iowa and Illinois.

“At that point, it was not obvious that he was the backup quarterback,” Franklin said. “Ta’Quan [Roberson] had been in the program longer, and it was pretty obvious to everybody that he gave us the best chance at that stage to win.”

Franklin said Veilleux has simply “gotten better,” the reason behind putting him in against Rutgers but not against the Hawkeyes or Illini.

Similar to Clifford, however, Franklin wasn’t too clear on whether Veilleux would be healthy enough for action because most of the quarterback room dealt with illness the entire week of practice.

“We didn’t have a scholarship quarterback at Friday’s practice,” Franklin said. “We didn’t know that Christian [Veilleux] was going to go last night… it was going to be Mason Stahl.”

Whether it’s Clifford, Veilleux, Roberson or Stahl, wide receiver Parker Washington said all the Penn State quarterbacks have one thing in common.

“They’re natural leaders,” Washington said. “[Veilleux] came out, and it was just like nobody ever left.”

An ugly game, but nonetheless a shutout win for Penn State, finished the home slate for the …

Penn State left Beaver Stadium with a 28-0 win over two opponents Saturday: Rutgers and the PSFlu. While the Scarlet Knights were shut out on …

Let’s be frank, James Franklin has a very important decision to make before facing Michigan State next Saturday in the 2021 regular season finale following Penn State’s 28-0 victory over Rutgers.