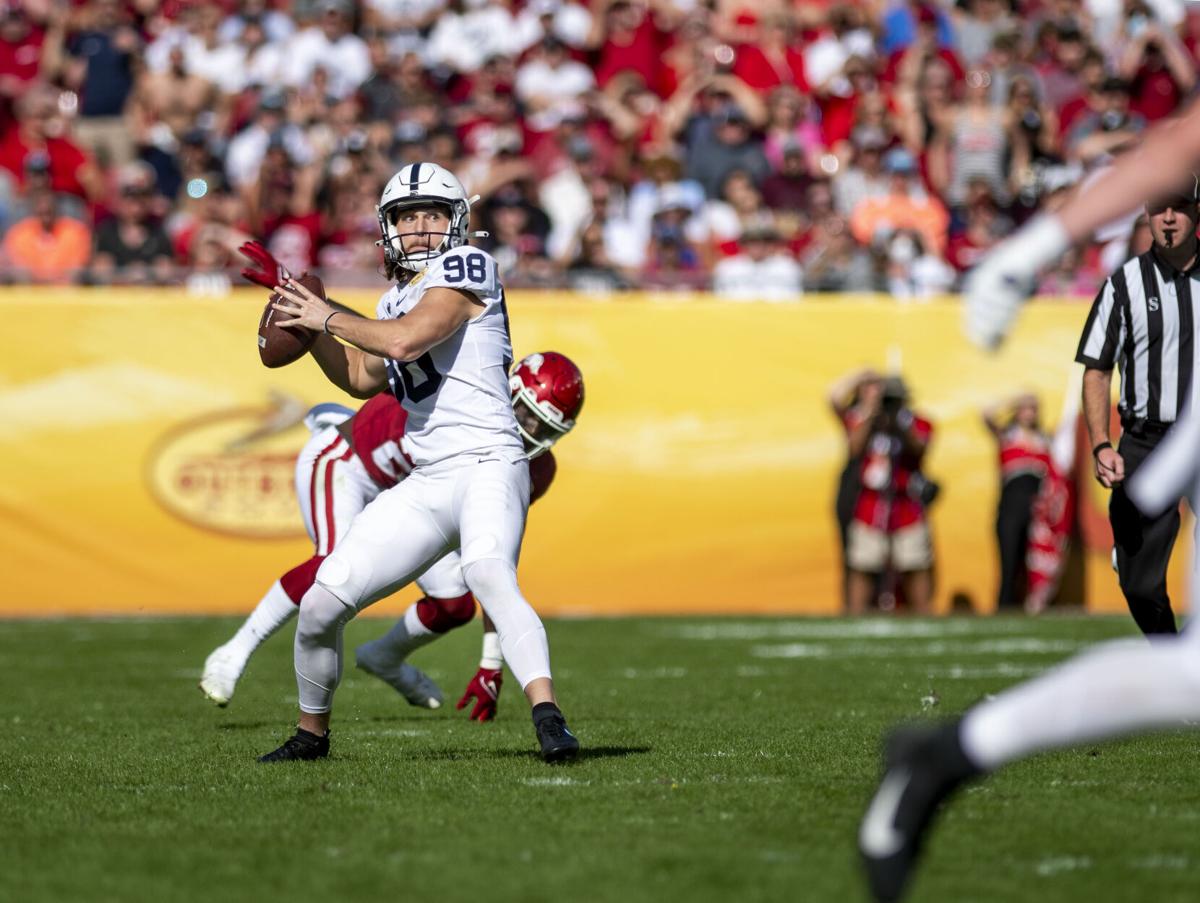 Kicker Jordan Stout (98) looks to make a pass during Penn State football’s matchup against Arkansas in the 35th Outback Bowl at Raymond James Stadium on Saturday, Jan. 1, 2022 in Tampa, Fla. The Razorbacks defeated the Nittany Lions 24-10. 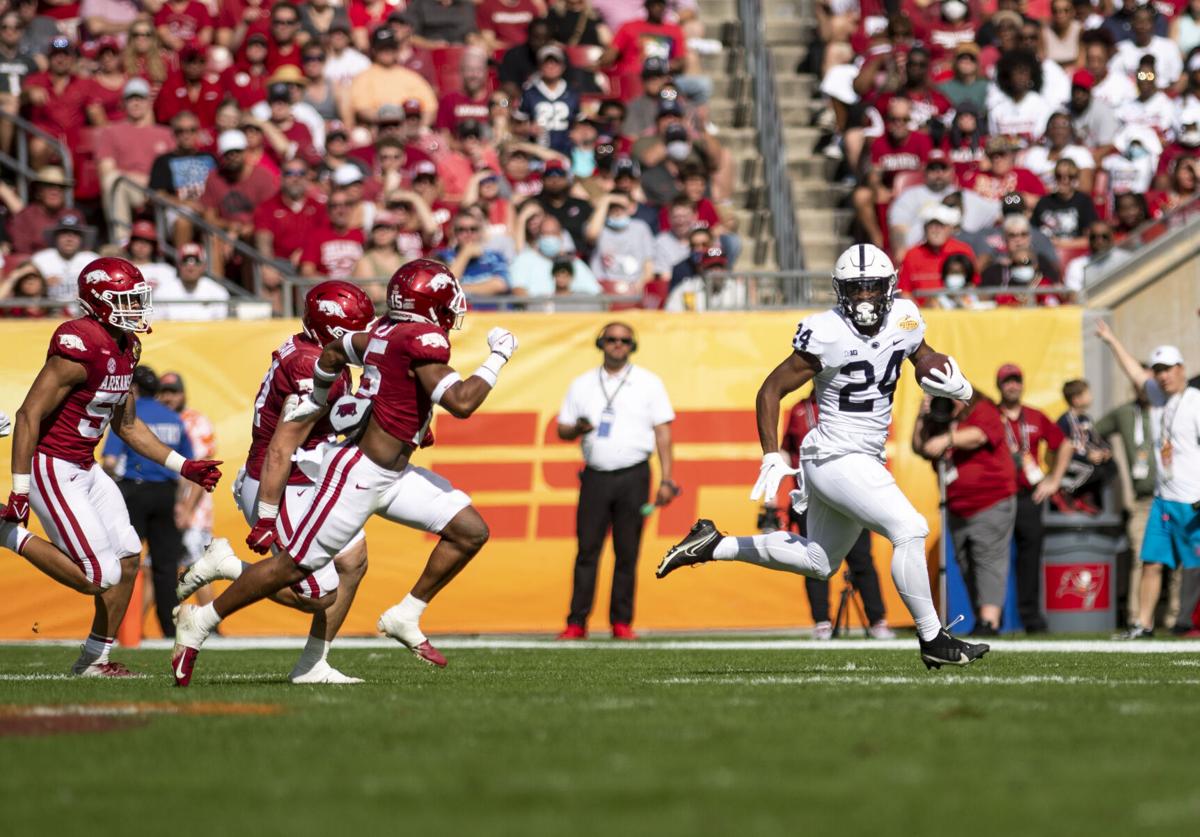 Running back Keyvone Lee (24) carries the ball during Penn State football’s matchup against Arkansas in the 35th Outback Bowl at Raymond James Stadium on Saturday, Jan. 1, 2022 in Tampa, Fla. The Razorbacks defeated the Nittany Lions 24-10.

Two Penn State running backs made their return to Florida for the Nittany Lions’ Outback Bowl matchup with Arkansas.

Keyvone Lee and Noah Cain, who played their high school football in the sunshine state, have split snaps since the start of the season. However, neither has been able to achieve one feat, likely deemed relatively feasible by most starting running backs in the world of football.

“I would like to have 100 yards or more before the end of the season,” Lee said at practice Thursday.

Contrary to most performances this season, by the end of the first half, it looked as though Lee could actually reach the 100+ rushing yard mark for the first time this season.

Entering the locker room with 36 rushing yards on just four carries, Lee was well on his way to a fruitful performance on the ground if given an opportunity in the second half.

When Penn State returned to the gridiron for the second half, holding on to a fragile 10-7 lead, offensive coordinator Mike Yurcich seemed to have other ideas in mind as to how to extend the three-point advantage.

Unfortunately for Lee, those ideas didn’t include him.

In the third quarter, he didn’t receive a single carry, as the Nittany Lions gave up 17 unanswered points to fall behind 24-10.

Lee finished with just one second-half carry for five yards, bringing his game total to 41.

While Yurcich was trying to find a feel for the Penn State offense in his first few games as coordinator, it was clear the run game wasn’t working.

Even still, Cain, the leading rusher at the time, still averaged nearly 16 carries per game over the season’s first three contests, despite failing to record more than 69 rushing yards in a game over that span.

On Saturday, the run game — for once — actually seemed to have found a groove.

But in the second half, Yurcich oddly stopped calling for the Nittany Lions to run the football, ultimately failing to make much noise in the air with Sean Clifford struggling to complete over 44% of his pass attempts — a new career low.

“We need to run the ball more consistently. There's no doubt about that,” Franklin said. “You can't go away from it. We did some good things in the first half. We got to keep those things mixed in, and we didn't do that.”

What the Nittany Lions did do in place of a consistent rushing attack was questionable to say the least.

Highlighted by a fake punt that found punter Jordan Stout breaking a tackle in the backfield then launching a 43-yard hail mary attempt, Penn State’s play calling by the end of the first half prompted the age-old question: “What?”

“We had a fake in the game plan,” Franklin said of the thought process behind the fake. “Felt like in that situation we’d get either a pass interference call or [Arkansas] would catch the interception.”

In the third quarter, as Arkansas began to form a significant lead, Penn State didn’t fight back aggressively on the offensive end, instead opting for quarterback rushes and short-yardage pass plays.

When the fourth quarter rolled around, the Nittany Lions were faced with a 14-point deficit.

Never once did it occur to Yurcich to call some reads to Parker Washington?

Most people will likely remember Washington’s Outback Bowl performance for his first quarter one-handed grab, but that was just one of the three receptions for double-digit yardage in the first two quarters.

By the end of the first half, Washington had already totaled 77 receiving yards.

The stats don’t lie — and neither does the film.

Washington was targeted eight times Saturday afternoon and came away with seven receptions.

Once Veilleux stepped in and hit Washington twice more, it was too late.

Franklin, Yurcich, Joe Lorig and company had already wasted too much time with questionable and head-shaking play calling.

The Nittany Lions will have to wait until next fall to make up for it.