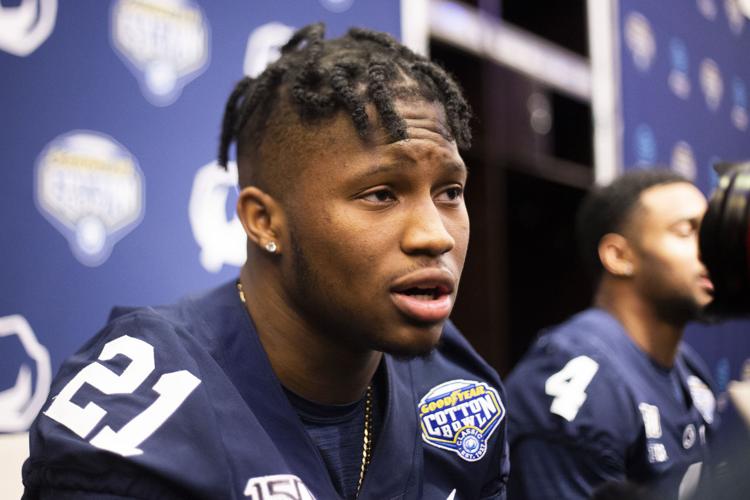 Running back Noah Cain (21) answers questions from media members during the Cotton Bowl Media Day at the AT&T Stadium in Arlington, Texas on Thursday, Dec. 26, 2019. 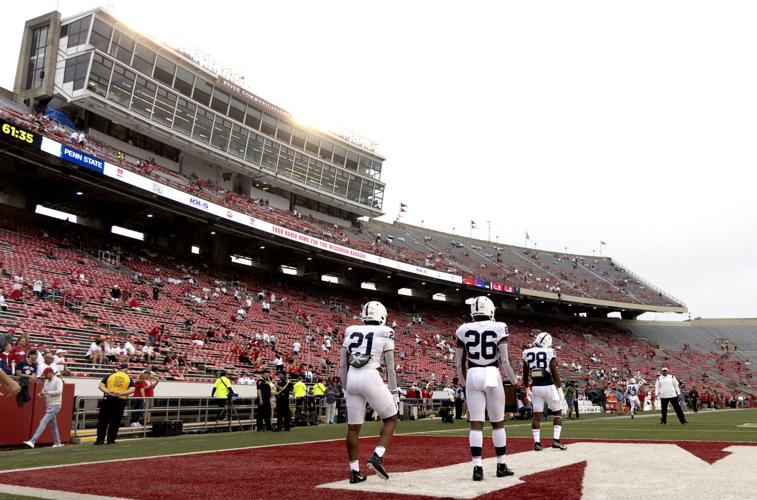 Penn State running backs Noah Cain (21) and Caziah Holmes (26) warm up in the end zone prior to the the Nittany Lions' season opener in Madison, Wisc. 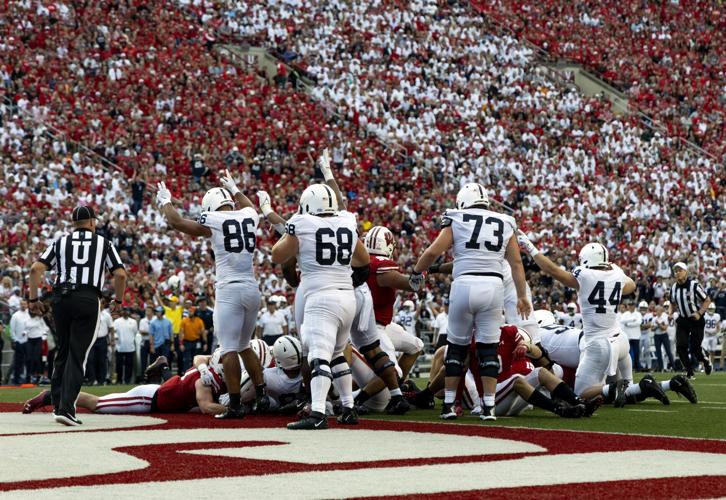 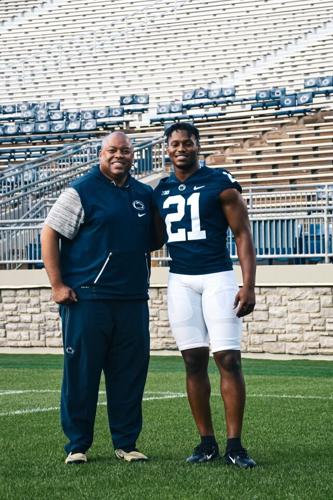 Penn State running back Noah Cain and his dad Terence pose for a picture at Beaver Stadium. 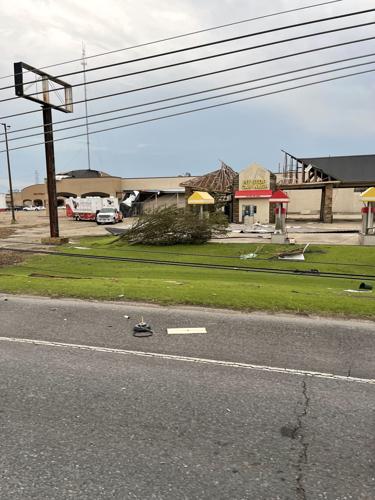 The Nittany Lions’ promising young tandem of Journey Brown and Cain were poised to be a lethal one-two punch last season, but then Brown medically retired from football before the season began.

Three plays into the Indiana game, Cain came off the field hurt.

His dad, Terence, was called down to the locker room to go through tests with Noah. While Terence said they didn’t know the severity of the injury initially, the first thing Noah did was finish the game on the sideline with his teammates.

After the game and as the season progressed, it became increasingly obvious that Noah wouldn’t play another snap in the 2021 season.

He had a long road to recovery ahead of him, but the support system from his family wasn’t going anywhere.

According to Terence, one of the most important parts of a young athlete’s recovery process is making sure they’re as mentally fit as they are physically fit.

No matter his mental preparedness or the support around him, Noah had an unprecedented task in front of him.

He said the rehabilitation process was a “humbling” experience, but his faith and support system were driving factors for him throughout the process.

“Having to get used to that new normal, coming out of surgery and having to adjust mentally and physically, it was very challenging… I’m just thanking God to be where I’m at right now.”

Throughout the process, Terence said Noah had an approach similar to that of any elite athlete.

He treated his rehab the same way he would prepare for a game — he was ready to go to war.

Penn State fans may have seen an occasional video of Noah going through drills or a quick update from James Franklin throughout the offseason, but they didn’t see him going the extra mile each and every day.

“If you wanna do any type of rehab and come out even stronger and better than you were before, you do the things that [are] required, and you find out the little things that you can do when you’re not actually with the trainers,” Terence said. “You look at any great player, of course you’re gonna go to practice and you’re gonna do your workout, but when you leave, you do things outside… It’s always going beyond the extra call of duty.”

When August rolled around, there wasn’t much doubt Noah would suit up against Wisconsin. By game day, he was suited up and ready to go.

The first play of the game was a handoff from Sean Clifford to Noah. It went for a loss of one yard, but that number didn’t mean much in the grand scheme of things.

The junior bell cow was officially back to the starting lineup — and back healthy.

Without trying to sound “arrogant,” Terence didn’t have any inkling of nerves to see Noah’s first carry of the season. He’d been by his side through the injury, and he knew what to expect when Noah stepped back on the field.

The journey back from injury was over when Noah stepped on the field in Madison on Saturday.

There was more weighing on his mind, though.

Noah is a native of Baton Rouge, Louisiana, where much of his family still lives, including his dad.

Terence said the hurricane affected their family “tremendously,” and had they gotten the same level of rain as places like New York did, he said he’d likely be moving away from the area.

He was forced to drive to Madison for the game because the New Orleans airport was closed, but he and his family drove to State College for the week afterward because there was still no power in their home.

“We had some damage but nothing major, but we had some family members and friends [whose] homes were completely destroyed or under water. It was tough,” Terence said.

Before making the drive to Madison, Terence said he and members of his church partnered to go around the community and work to rebuild it.

But there’s a long way to go in the recovery process.

“Even doing that for a couple days, it’s gonna take months and months and months. When we leave here on Sunday and go back, we’ll be back in the trenches again,” Terence said. “It’s gonna be something that’s gonna have to be ongoing to get these people back to some stability.”

A long recovery process is familiar for one Baton Rouge resident — Noah.

And with a community in need of something positive to resonate with, the star running back’s return to the gridiron gave just that.

Penn State found itself down 7-10 with the ball early in the fourth quarter against Wisconsin. Noah had been bottled up most of the day, but a long run and a big pickup for him through the air sparked a field goal to tie the game.

On the next drive, Noah pounded in a touchdown — his first since 2019 — that ended up being the difference maker in the 16-10 win.

“I’ve never had so many text messages in my life,” Terence said. “They were happy. Seeing [Penn State] be in a gritty battle but also come out with a win and the way it happened — that brought a lot of joy to their heart.”

Noah made one of the biggest plays in the win, and the residents of his hometown were able to look on with pride after everything they’d been through.

Terence said people even went as far as to tell him and Noah thank you after the game.

“It’s amazing what sports can do during a time [like this]. That brought some joy,” Terence said. “I had people calling [who] I didn’t even know were watching the game… I don’t know how they found out, but they were tuned in.”

Once the game ended, Noah met with his family in the stands and embraced his mom in a hug.

My mama! Always trying to make her proud🙏🏾 https://t.co/Q32BPlKQw0

From injury to hurricane to game-winning touchdown, it was an “emotional” postgame meeting.

“It was a surreal moment with all that’s going on in the world right now,” Noah said. “For my aunt, my cousin and my dad to make it up to the game through the midst of the hurricanes, it was just a blessing to see them after the game and be able to celebrate. It was just exciting for me to be able to go out there and play the game that I love again.

“For my mom, dad and the rest of my family to be in the stands — it was an unreal moment, something I’ll always remember and never forget.”

As for his coach, Franklin is happy to see his No. 1 back at full strength and is ready to have the family back around the facility and Beaver Stadium.

“Missing last year and getting back for the first time and having success is awesome,” Franklin said. “Where he’s from, the combination of Louisiana and Texas and what they’ve been battling through, [it was] very emotional… It’s been challenging, but Noah’s handled it all extremely well, and we try to be as supportive as we possibly can.”

He might not have been worried about Noah’s return from injury Saturday, but Terence looked on in pride for his season debut in Madison.

And Noah’s fight back onto the field has perfectly encapsulated the message surrounding his hometown going through its own fight now.

“[I’m] extremely proud,” Terence said. “Fighting through adversity is the same thing our family members, friends and neighbors are gonna have to do in this time.”

Penn State has not only an Energizer Bunny in goal for the 2021 season but a natural leader in Kris Shakes.

After a big win against Wisconsin in Week 1, Penn State welcomes its first nonconference opponent of the season in its home opener in Week 2. 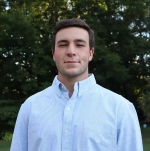 Max Ralph is a photographer for The Daily Collegian majoring in broadcast journalism with minors in sports studies and Japanese. He is a junior at Penn State.