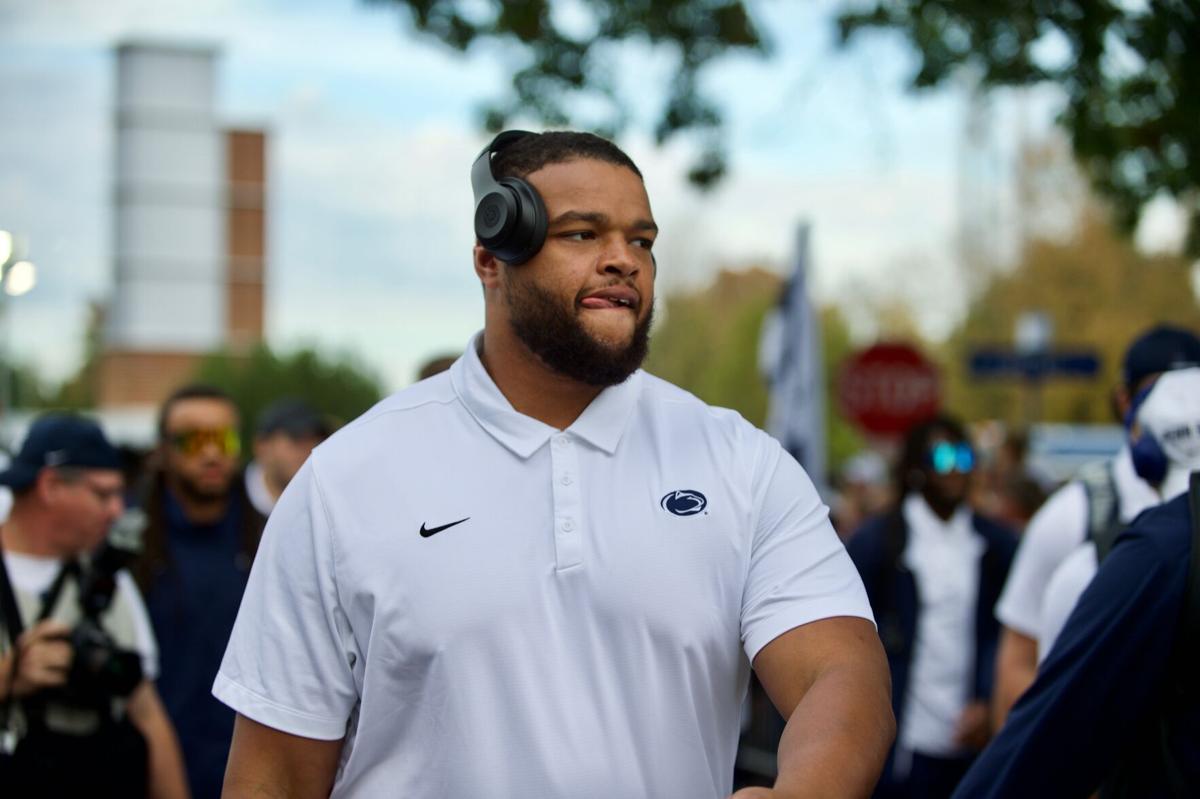 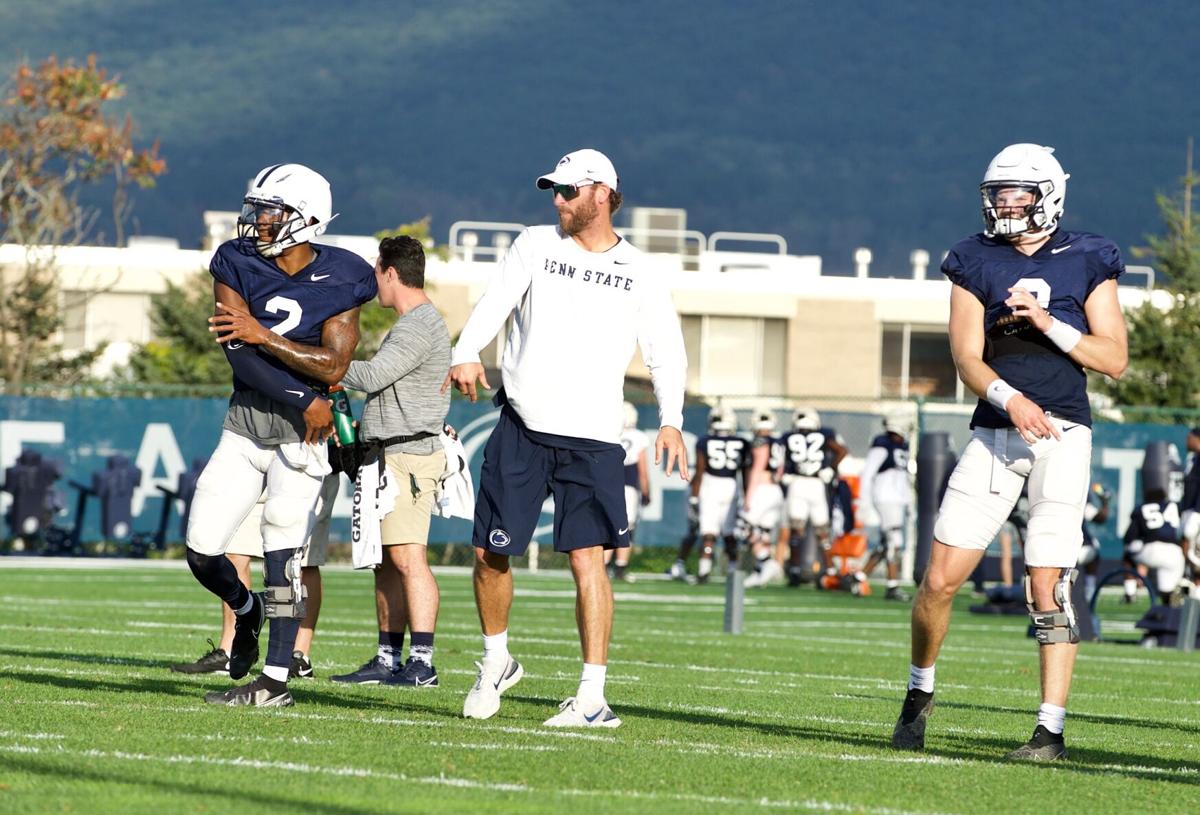 Penn State’s loss to Iowa last Saturday likely generated the most media buzz of any game this season, with headlines pouring in from before kickoff until well after.

First there were the injuries, the boos and the loss itself. All three storylines created talking points for James Franklin to address following the game.

As the emotions likely have settled and his team has had time to watch the film, Franklin and his program returned to practice Tuesday to prepare for their next challenge: Illinois.

On Wednesday, Franklin addressed the media for the first time since Penn State snapped its undefeated season.

Penn State star defensive tackle out for the season

Unfortunately for the Nittany Lions, Mustipher’s impressive 2021 campaign has come to a close.

On Iowa’s first drive of the game, Mustipher went down with what looked like a leg injury.

After going to the locker room, Mustipher returned to the sideline later in the game with a boot and crutches.

Franklin did not specify what the injury is but confirmed he’ll be out for the year.

In Mustipher’s replacement, the Nittany Lions employed redshirt sophomore Dvon Ellies, who tallied one tackle and a quarterback hurry.

It’s expected Ellies will take over for Mustipher on the starting interior, with redshirt freshman Coziah Izzard likely to back him up.

Izzard was thrown into action against Iowa after Ellies went down with his own injury, but he returned a few snaps later.

“Obviously, PJ we think is an elite level player, so they’ve still got work to do,” Franklin said. “But I thought, overall, those guys did some pretty good things.”

Following the announcement that Mustipher would be sidelined for the rest of the season, Franklin shared his thoughts on the reaction from the Hawkeye faithful nearly each time a Penn State player went down with an injury.

To begin his take on the “fake injury” fiasco, Franklin began by emphatically shooting down any possible strategy of faking injuries that would benefit him against Iowa.

“How does this strategy make sense against a huddle team?” Franklin said. “People use this strategy to slow people down — spread offenses, tempo offenses… They huddle.”

Aside from the type of offense Iowa runs, Franklin also focused on the players specifically who went down over the course of the game.

“Would it be strategic for us to tell PJ Mustipher to go down and fake an injury? One of our best players, one of our starters, one of our captains.” Franklin said. “Let’s talk about his backup, Dvon Ellies, who also got booed. Would it make sense for the backup d-tackle — we’ve already lost our starter — to send him out of the game for a play? I don’t think so.”

While Ebiketie and Brisker later returned, Sutherland was added to the list of Nittany Lions out for the rest of the game.

“Maybe our best defensive player… Am I gonna tell [Ebiketie] to go down? Does that make any sense?” Franklin said. “Brisker went down twice against Wisconsin, they didn’t boo him.”

The injury that likely stood out the most for the blue and white over Saturday’s contest was that of starting quarterback Sean Clifford. He entered the locker room midway through the second quarter and did not return to the game.

“Sean Clifford, did we want him to go down and not return in the game?” Franklin said.

Then, Franklin asked everyone to put themselves in the shoes of a parent.

“Your son is down on the field with an injury, and the stadium is booing,” Franklin said. “I just told you PJ Mustipher is done for the year, and we’re booing. Is that good for college football?”

Status of the quarterback room

No different than any other injury on his team, with the exception of season-ending ones, Franklin refrained from disclosing any and all information on the health status of his starting quarterback.

“I don’t get into injuries,” Franklin said. “But what he’s dealing with is not uncommon at the quarterback position.”

What he did share, however, was a slight update on the status of his quarterback room and how this week of practice has gone for the group.

Ta’Quan Roberson and Christian Veilleux sit behind Clifford on the depth chart.

“Ta’Quan and Veilleux have both been splitting reps so far in practice this week,” Franklin said. “They’ve done well, but nothing has been decided or determined at this point.”

According to Franklin, it’s “always a competitive situation” when determining whether Roberson or Veilleux will get the majority of snaps in the next game.

For Clifford’s preparation, Franklin said he is “preparing exactly the same” and “tries to include [Roberson and Veilleux] as much as he can” despite differing academic schedules.

With multiple injuries still yet to heal and two developing quarterbacks on the rise, a bye week this week will give the Nittany Lions double the amount of time to prepare for their next contest against Illinois on Oct. 23.

“This week will be telling for both [Roberson and Veilleux]. We’ve only really had two practices,” Franklin said. “Next week will be obviously important as well.”

Among the load of injury discussion, Franklin spoke candidly of the timing of his team’s bye week.

“I’d prefer to go into the bye week with a win,” Franklin said. “But from a banged up perspective, the timing has been good.”

Penn State will be without a key piece of its defense for an extended period of time.

Penn State took a big hit from injuries during Saturday’s loss on the road to Iowa, but the first player it lost could be one of the hardest t…