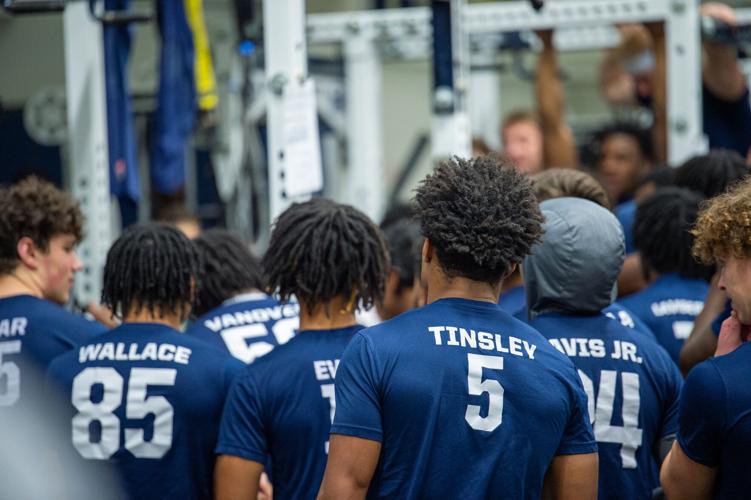 In late 2021, Penn State made a splash in the transfer portal with the addition of a receiver from a pass-heavy offense.

The Nittany Lions scooped up fifth-year-senior receiver Mitchell Tinsley from Western Kentucky, boosting the outside weapons for quarterback Sean Clifford.

Tinsley played at Western Kentucky for two seasons, with 2021 being his biggest season out of the two.

The Lee’s Summit, Missouri, native racked up 1,402 receiving yards and 14 touchdowns in 2021, which were the second-best marks for the Hilltoppers.

Now, Tinsley will bring a veteran presence to the squad of young Nittany Lion receivers.

Offensive coordinator Mike Yurcich will appreciate Tinsley’s vision, his ability to shake a defender in man-to-man coverage, physicality and sharpness on cuts.

One of Tinsley’s biggest strengths is his ability to find the gaps in the defense to create an easy pass for the quarterback.

Tinsley's vision really comes into play when the defense is playing zone because he gets lost in coverage pretty easily.

When Western Kentucky quarterback Bailey Zappe was in trouble, Tinsley wouldn’t stand still. Instead, he found open space so Zappe could get the ball away easily.

In this clip, Zappe is forced outside the pocket, but Tinsley keeps moving and finds a hole in the defense.

Clifford finds himself scrambling often, so Tinsley will be another option when the play breaks down.

Even at 203 pounds, Tinsley can still beat defenders downfield with his speed.

Tinsley excelled at creating space with his speed to add to his arsenal of skills to benefit Penn State’s offense.

In man-to-man coverage, Tinsley has solid hands off of the line to break the defenders' press, then explodes downfield.

In this clip, Tinsley is going against a Power Five defender at Michigan State man-to-man, and he makes a move at the line and jets down the sideline.

His speed creates enough separation to haul in the ball, creating a big play.

Penn State’s receiving corps is younger, so Tinsley’s knowledge of how to create separation can not only help the Nittany Lions in 2022 but in the future as well.

Most of Tinsley’s catches were made with defenders in close vicinity.

Tinsley comes in with a solid build at 6-foot-1 and 203 pounds, which he uses to his advantage out on the field.

He has a tendency to bounce off tackles in open space and turn upfield for the score.

In this clip, Tinsley makes the catch and gets hit directly after, but with his 203-pound stature, it takes more than an arm tackle to take him to the ground.

Other than breaking tackles, Tinsley uses his size paired with his hands to come down with the football with defensive backs draped all over him.

Tinsley has a knack for finding the football, which gives Penn State another physical target to balance out some of its smaller ones.

Here, Zappe throws a contested ball in Tinsley’s direction with a defensive back in good position, ready to make a physical play on the ball.

However, Tinsley keeps his eye on the ball and comes down with it, moving the chains.

Tinsley’s hands will be useful when Clifford sometimes overthrows the ball or forces it into coverage.

In the Western Kentucky offense, Tinsley lined up on the outside and ran a lot of in-cutting routes toward the middle of the field.

2021 Hilltopper offensive coordinator Zach Kittley drew up the offense to cater to Tinsley’s strength of making sharp cuts to the inside.

Tinsley either used his speed to create separation down the field on a post or his strength to shove off a defender to cut on a slant.

These middle-of-the-field routes turned into big plays for Tinsley because they got the big speedster into space.

In this clip, Tinsley cuts toward the middle of the field on a post route, utilizing his speed to create separation.

Tinsley’s ability to cut at both levels adds another middle-of-the-field threat for the Nittany Lions, pairing well with the likes of Parker Washington and KeAndre Lambert-Smith, who each have experience working out of the slot and in open space.

Penn State's home themes are set for the 2022 season.

The wait is over.

Penn State added to its quarterback room of the future Thursday afternoon.