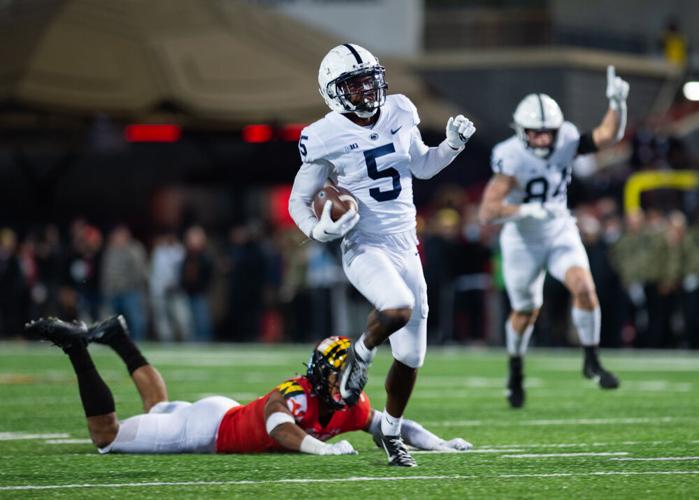 Penn State receiver Jahan Dotson could be the first player from Happy Valley taken off of the NFL Draft board.

Dotson played four seasons in State College, but he really exploded in his final year with the Nittany Lions in a full season as their No. 1 receiver.

He used his crafty routes, hands and speed to merge into one of the top receiving prospects in the 2022 NFL Draft.

In his final two seasons, Dotson was renamed to “JaHands” Dotson by the Penn State faithful.

The senior finished the season with 91 receptions, which was just behind Ohio State’s Jaxon Smith-Njigba and Purdue’s David Bell.

Dotson had the best hands on the team, making tough catches look easy.

Then-fifth-year-senior quarterback Sean Clifford counted on him as a safety blanket at times, heaving the ball downfield.

Dotson went up and caught Clifford’s passes even with defenders blanketed on him.

On this play, Clifford launches a ball down the sideline in Dotson’s direction. Dotson has a defender all over him, so he climbs the ladder and comes down with the ball in one hand.

NFL teams can count on Dotson coming up with the ball when it’s thrown in his direction.

Dotson’s other strength is his ability to feel where he is on the field.

He made a living catching the ball and tapping his feet in bounds to come up with the score.

On this play, Clifford fires the ball Dotson’s way, and he comes down with it, keeping two feet in bounds for the score.

His awareness, along with hands, will make him one of the best receivers in this year’s draft.

Dotson may not have the flashy numbers when it comes to speed and size, but he has all of the technical aspects coaches look for in a receiver.

His route running and ability to create space will make some NFL coaches fall in love with him.

On this play, Dotson catches the Maryland defender on a double-move, creating space for Clifford to loft an easy ball to Dotson.

Dotson can find holes in defenses pretty easily, with most of his catches coming when he’s wide open down the field.

The other aspect of his play is his 4.43-second 40-yard dash speed, which finished 12th at the NFL Combine.

However, his speed still came in handy, as he had enough to create space by blowing past defenders.

On this play, the corner is playing press coverage on Dotson, and he accelerates and blows by the defender at the end of his route to move the chains.

It does take some time for him to get open because of his speed, which could knock his draft shock.

The receiver excels most of the time when the defender is playing with a cushion, but when he’s pressed, he struggles to get off of defenders.

On this play, Dotson is pressed man-to-man, and he can’t shake the defender, even though it was a bad pass by the quarterback. Clifford’s pass would have been made easier if Dotson got a bit more free.

The other area where Dotson’s size comes into play is when he catches the ball and becomes a ball carrier.

He only weighs 184 pounds, so he comes down pretty easily with arm tackles when he has the ball in his hands.

However, he does make defenders miss with his ability to make tight cuts.

Here, Dotson catches a deep pass from Clifford, but he’s brought down before the goal line, partially because Clifford underthrew the pass.

His size may be the only problem NFL scouts see in Penn State’s top wideout, but other NFL receivers have made a living at similar sizes, so it shouldn’t be too much of a problem.

Penn State’s 2022 draft class is one of the deepest in recent memory, but it’s also part of …