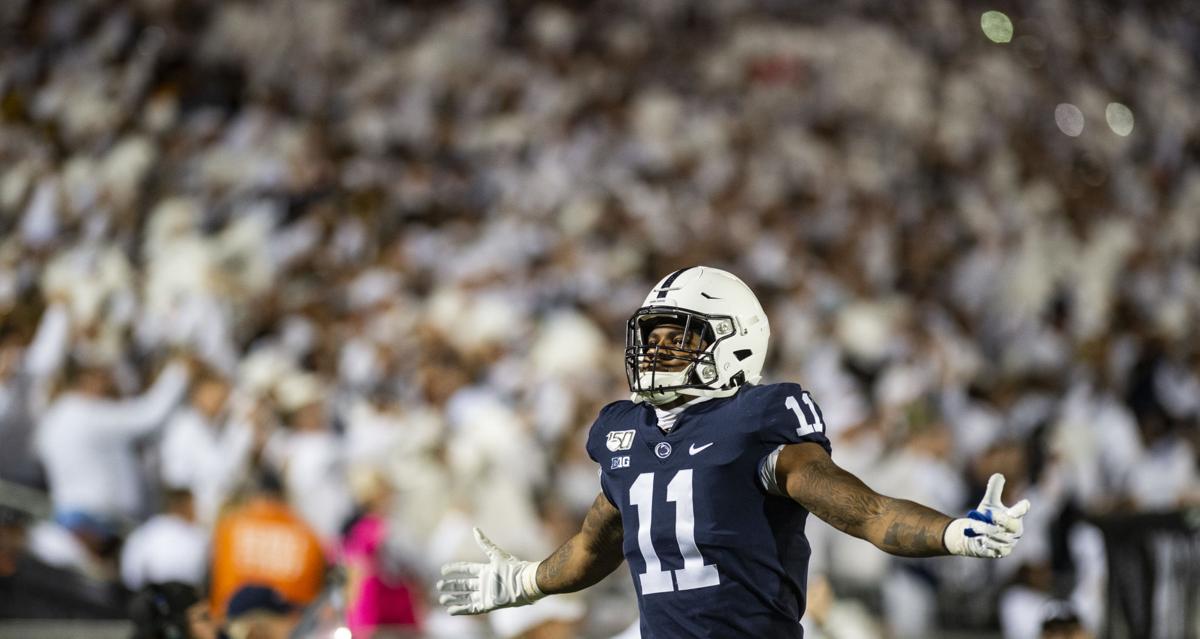 Linebacker Micah Parsons (11) hypes up the crowd before the White Out game against Michigan on Saturday, Oct. 19, 2019.

After Micah Parsons led Penn State in tackles as a true freshman, he put his name on the map and showed the world he was here to stay.

He racked up 83 tackles as a freshman and topped that number with 109 his sophomore year. He added six forced fumbles and five passes defensed over his time in Happy Valley.

The tangibles speak for themselves, as Parsons weighs in at 6-foot-3 and 246 pounds, but the speed he possesses for that size is almost disturbing. He clocked a 4.39 40-yard dash at Penn State’s pro day, just faster than that of Nittany Lion legend running back Saquon Barkley’s 4.40.

Upon further review of Parsons’ film, it’s clear he’s a lot more than just his tangibles.

Here’s a look at some of Parsons’ best plays from his two years donning the blue-and-white.

In this play, Parsons shows off everything from his football IQ to his top-tier speed.

He’s headed toward the line of scrimmage early on a blitz, but his instincts and high-level play recognition allow him to adjust quickly to all the motion that happens in the offensive backfield.

He fights through light contact at the line of scrimmage, but keeps his eyes in the backfield and follows the ball perfectly through three different Memphis players’ hands.

Then, he closes the play with his speed. Some linebackers wouldn’t be fast enough to catch up to the sweep even after recognizing it, but the ability to close so quickly is a big part of what makes Parsons such a highly-touted prospect.

He again recognizes the play design quickly, and fits his body right into the gap well before the offensive lineman can even get close to blocking him. Parsons’ ability to recognize plays quickly ranks up there with just about anybody in this draft class.

Then, he forces the running back to change directions thanks to his quick gap fill, but he is still able to fight through the back-shoulder block and swipe at the ball to knock it loose.

Parsons could have given up on the play when he was blocked as the tailback cut to the opposite side, but he made a last-ditch effort to keep the play alive and subsequently recorded a forced fumble.

Parsons does a great job here of reading his keys on the offensive line to once again recognize the play well before it develops.

As the quarterback drops back, he’s faking a pass on a draw play, but Parsons sees the running back creep up and the offensive line shift to a run block very quickly and darts into the backfield, completely unfooled by the fake.

Parsons does a nice job of staying home and reading his keys rather than panicking and committing to the pass. He shows great ability to trust his eyes and then uses his lightning speed to follow up on plays.

Here, Parsons shows off why teams should think twice about blocking him with just a tight end.

He’s shown he can be physical with offensive linemen at the point of attack, but here he simply sidesteps the tight end en route to a tackle for loss.

His footwork is far superior to most players his age, but yet again his ability to recognize the play is hitting inside allows him to put himself in position to make the tackle.

The quick brush from the tight end hardly affects Parsons, who keeps his full force under him as he fills gaps at the line of scrimmage.

Penn State football draft profiles | Is Micah Parsons a superstar in the making?

For decades, Penn State has been known to develop some of the most prominent linebackers in …

It is finally NFL Draft week, as the top collegiate players are set to hear their names called in Cleveland beginning Thursday.

Max Ralph is a baseball reporter for The Daily Collegian. He is a freshman studying journalism.