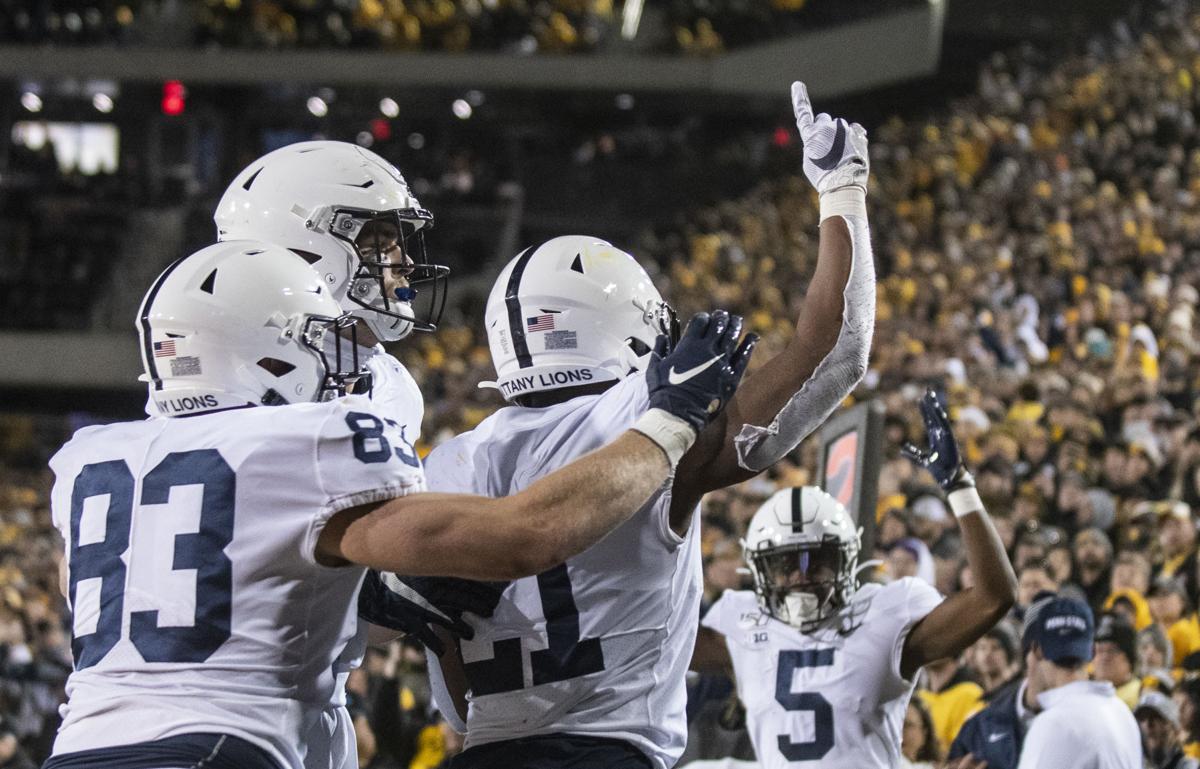 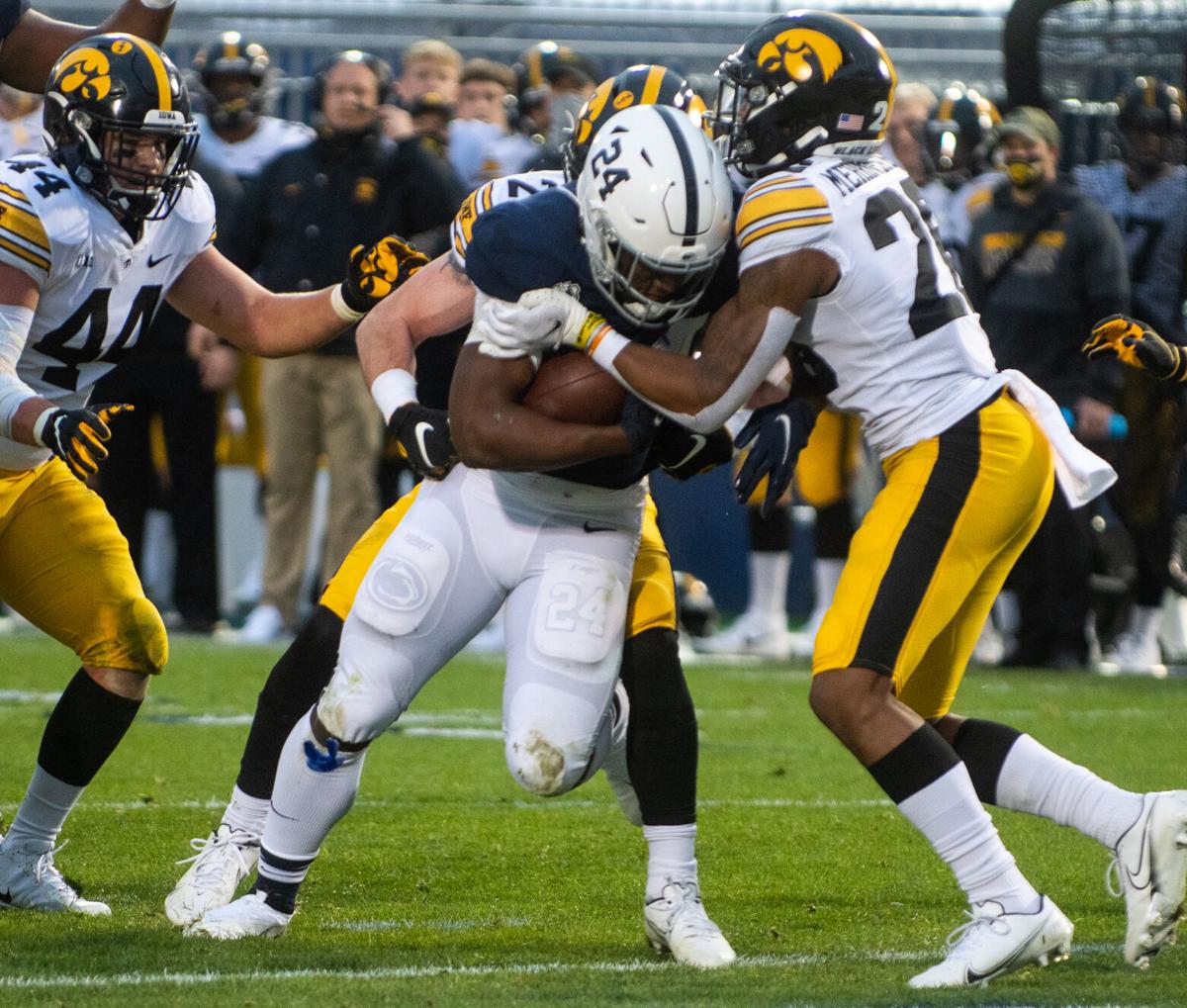 Penn State running back Keyvone Lee (24) scores a touchdown during the Big Ten football game against the Iowa Hawkeyes at Beaver Stadium on Saturday, Nov. 21, 2020. The Hawkeyes defeated the Nittany Lions 41-21.

Facing all of the distractions in the world before its 2020 season, Penn State was still expected to be one of the more competitive teams in the country last year — and for good reason.

The Nittany Lions boasted a roster filled with talent and athleticism while having some critical depth at key positions. Perhaps the most notable was the running back room, which returned the core that played a major role in the 2019 Cotton Bowl title run.

The group looked like it could potentially be the nation’s best on paper, but it’s well known those lofty expectations never came to fruition.

Journey Brown, the Cotton Bowl Offensive MVP, was expected to be the clear-cut starter and a budding superstar, but he was diagnosed with a career-ending heart condition just weeks before the season began.

Fast forward to the season opener, and newly minted starter Noah Cain went down with a season-ending injury on the first drive of the infamous loss to Indiana.

Obviously the season turned out to be among the most forgettable in Nittany Lion history, but some of their young backs gained crucial experience.

Now, as the team stares down the 2021 campaign, those expectations are back,and the talent the running backs are slated to present is as good or better than a year ago.

“I think the people that follow us closely know how our season started, with us losing our starting tailback before the season, and then losing Noah Cain who — we viewed as a starter as well — in play three of the season,” James Franklin said. So I think with [Cain] coming back, we’ve got a chance to have arguably one of the most talented and deepest running back rooms in the country, and I think last year proved you better have that.”

Cain proved in his true freshman season in 2019 that he can be the lead back for Penn State, as he stepped up on numerous occasions for Franklin’s team. One of his most notable performances was a 102-yard effort on the road against Iowa when he capped a 17-12 win with the lone second-half touchdown.

But before Cain can get his Nittany Lion career back on track, his health will have to be evaluated in camp, where Franklin hopes to see his bell cow at 100%.

Cain is not the only talented runner that returns for Penn State, though, as last year’s true freshman standout Keyvone Lee should play a large role for new offensive coordinator Mike Yurcich.

Star wideout Jahan Dotson said the experience Lee was able to gain last season was critical, and will set him up to become an even better back as he returns for year two.

“Keyvone did a great job last year coming in with a young running back core, kind of setting himself apart and being our go-to,” Dotson said. He was a big asset for us, and watching all those guys work this offseason — I know that they are bound for a big season.”

Another member of the running back room that Dotson made sure to mention was graduate transfer John Lovett, who comes to Happy Valley after four years of experience at Baylor.

He adds some much-needed experience to a young group and has a skillset that has the potential to change games, according to Dotson.

“He's a very quick, twitchy player that when he gets the ball in open space, anything could happen,” Dotson added. “I can't wait to see him work.”

As Penn State and Franklin know all too well, running back depth isn’t something to take for granted. But having a solid and competitive group provides benefits outside of their own positional room.

Senior defensive tackle PJ Mustipher sees the tailback group from a front row seat, and he said the litany of backs Nittany Lion fans will see this year are a classic case of iron sharpening iron.

“I love talking trash to them. They're great guys, but on the football field, they got a switch — all of them do,” Mustipher said. “When it's time to go, they run through anything that's in their sight. And if everybody on the offensive side continues their growth, it only helps us on the defensive side of the ball, going up against three, four or five [or however] many great running backs we have. I don't even know what the number is right now, it just gets higher every day.

“Competing against them on the daily, I'm not shocked by anything I see each Saturday in the fall, because I see it every day.”

Penn State’s coaching staff and players weathered the storm that was the pandemic-marred 2020 season, and the approach to the 2021 campaign wa…