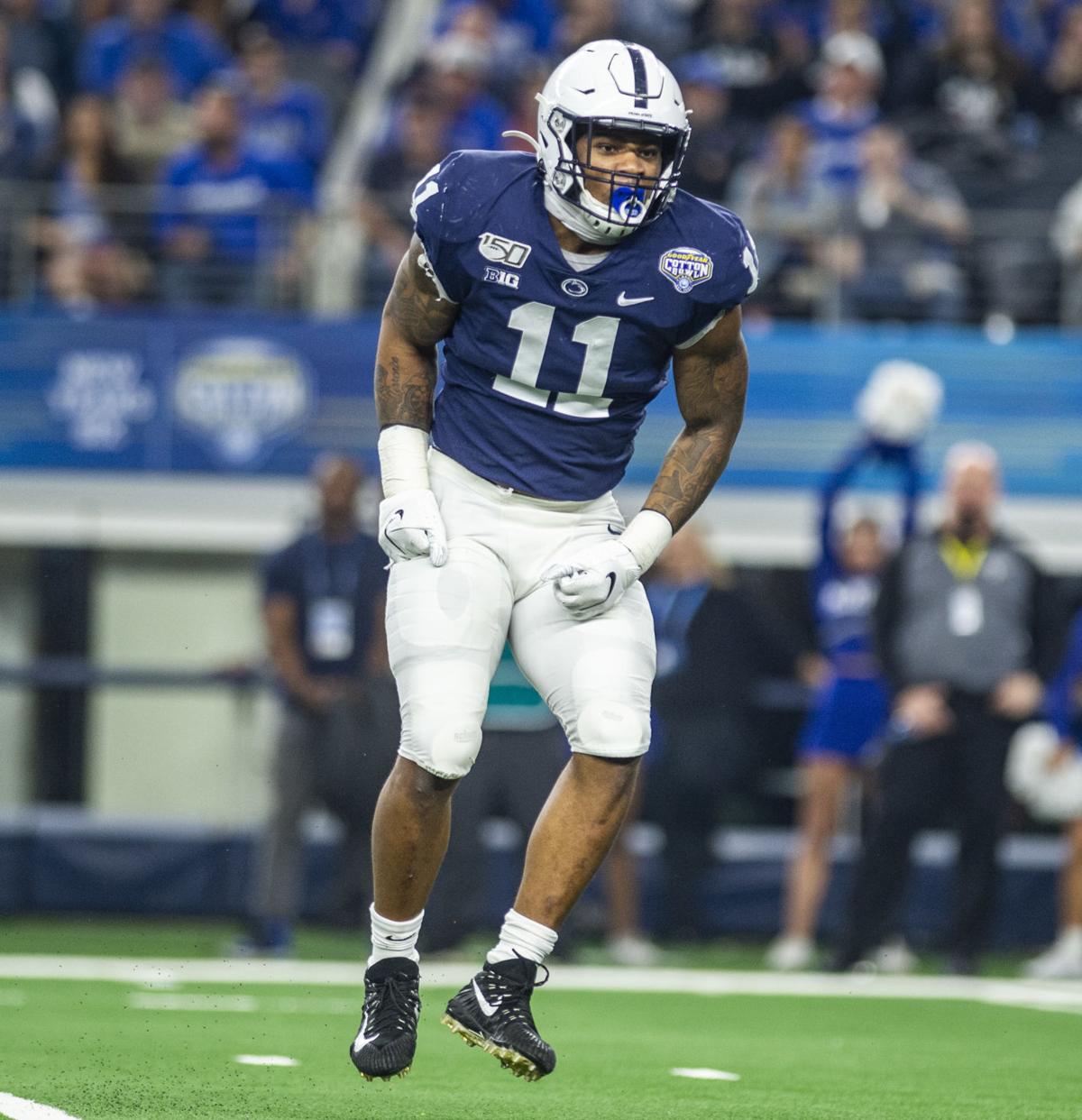 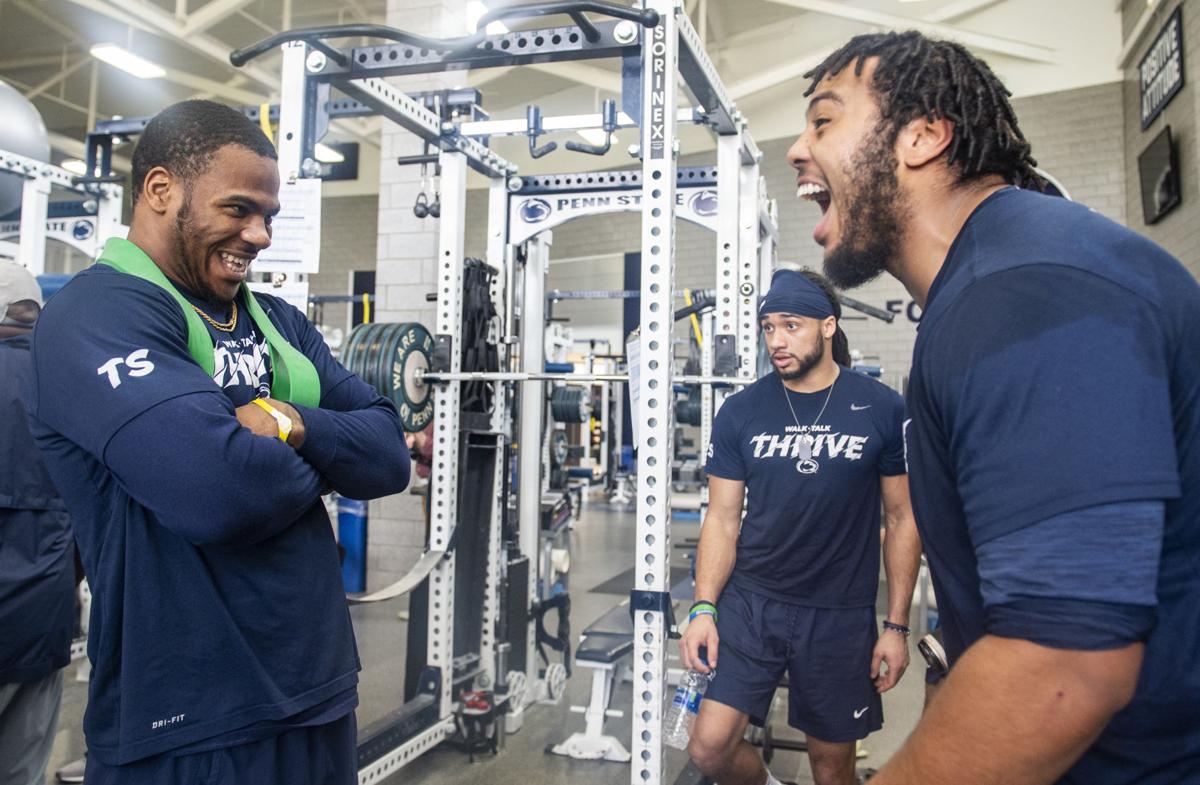 Linebacker Micah Parsons (11) and offensive lineman Des Holmes (75) play a game during a strength and conditioning session at the Lasch football building on Wednesday, March 4, 2020.

For decades, Penn State has been known to develop some of the most prominent linebackers in the history of the game — making Penn State known to many as “Linebacker University.”

Names like Sean Lee, NaVorro Bowman and LaVar Arrington come to mind, and Micah Parsons is next in line to keep this reputation a part of the Nittany Lion program.

In just two seasons on the field for Penn State, Parsons has solidified himself as one of the best to ever don the blue and white.

Here is a look at what makes Parsons one of the greatest Nittany Lions of all time and why he is viewed as a top prospect in the 2021 NFL Draft.

Without a doubt, Micah Parsons is one of the most intriguing linebacker prospects the football world has seen in years.

Entering James Franklin’s program as a defensive end in 2018, Parsons would soon make the transition into full-time linebacker — and quite a good one at that.

In his first season in Happy Valley, Parsons played somewhat sparingly. Despite appearing in 13 games, Parsons only started one game as a freshman.

However, limited action didn’t seem to affect him, as he became the first freshman in program history to lead the team in tackles with 83.

The following season, his last in Happy Valley, Parsons solidified himself as one of the most dominant defensive players in the country and a top NFL Draft prospect for 2021.

Now just days before the draft, Parsons’ stock is just as high as it was two years prior when he played his final game in a blue and white uniform.

When looking at metrics, Parsons is nearly a perfect linebacker prospect.

At 6-foot-3 and 246 pounds, Parsons is big for the position, but with a 4.39 second 40-yard dash, his size doesn’t seem to hold back his speed and acceleration off the block.

Take a good look at Parsons’ resume, and you’ll understand just what makes him so different from other football players.

With experience as both a defensive end and running back in high school, Parsons has natural pass-rushing abilities mixed with a unique skill set in terms of footwork.

As for on-field concerns, there isn’t much standing in Parsons' way. He projects as one of the best linebacker prospects to enter the NFL Draft in years.

However, some NFL scouts have off-the-field concerns with Parsons, according to multiple reports.

Sitting at No. 9 in this year’s draft, the Denver Broncos are in a prime position to take Parsons. It’s almost difficult to see them not selecting the Harrisburg, Pennsylvania, native with their first first-round pick.

If a top quarterback doesn’t fall into Denver’s lap or they don’t trade down, Parsons should almost certainly be their pick at No. 9.

Head coach Vic Fangio is one of the most highly respected defensive minds in today’s NFL. The only problem is that the Broncos have been pretty underwhelming under his charge.

With Von Miller sidelined for all of last season and Bradley Chubb still recovering from a 2019 torn ACL for the first couple games of the 2020 season, the Broncos defensive front has had an unlucky break as of late.

However, it seems the Broncos front office has its direction in place with an impressive offseason, solidifying a shotty secondary by adding respected free agent cornerbacks Kyle Fuller and Ronald Darby.

To continue its trend of strengthening its defense, Denver should look to draft a potential superstar in Parsons.

Miller is getting older, and it’s clear his best playing days are behind him. By drafting Parsons, the Broncos would escape a potentially drastic situation of weak coverage in the middle of the field and lopsided pass rushing once Miller retires.

Parsons can do it all in terms of coverage and could be a staple of the Broncos defense for years to come, just as Miller has been his whole career.

Penn State football draft profiles | Does anyone have more potential than Jayson Oweh?

After Micah Parsons led Penn State in tackles as a true freshman, he put his name on the map and showed the world he was here to stay.

It is finally NFL Draft week, as the top collegiate players are set to hear their names called in Cleveland beginning Thursday.