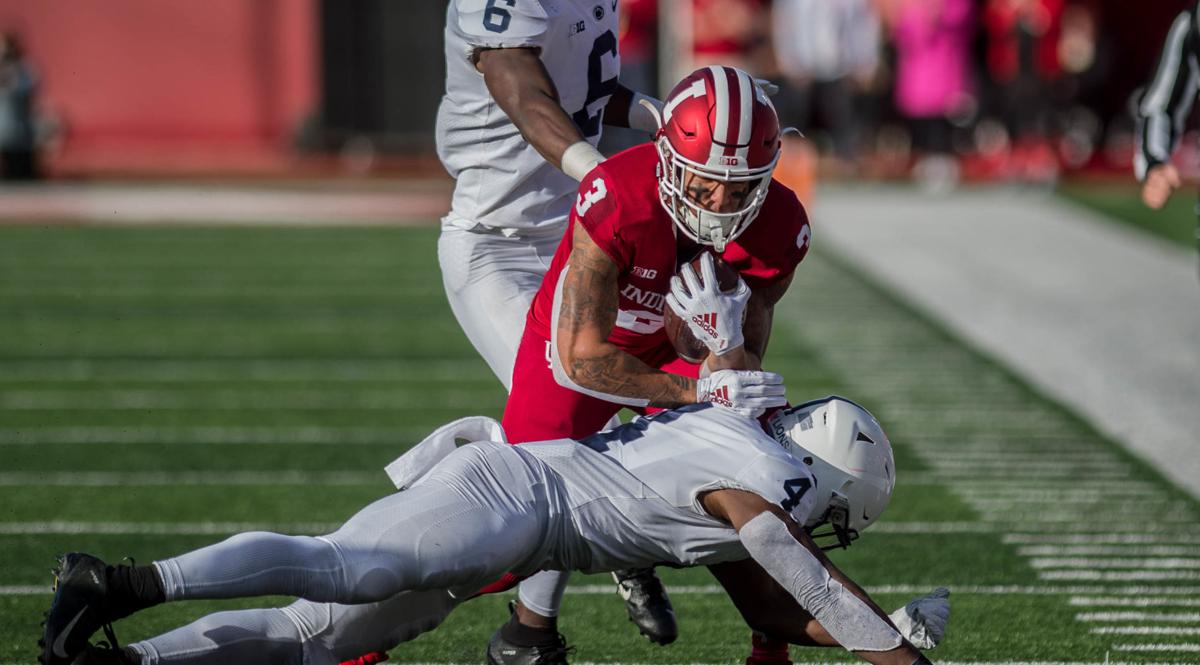 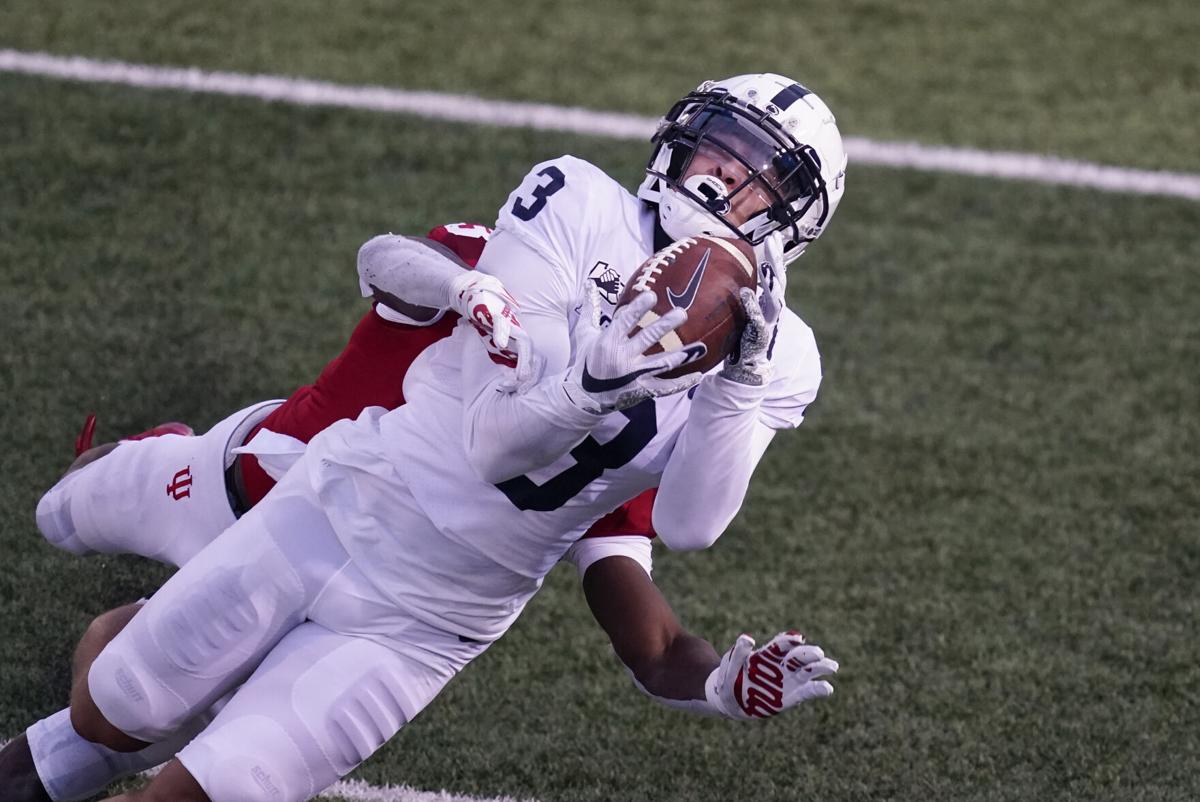 Penn State's Parker Washington (3) tries to make a catch while being defended by Indiana's Tiawan Mullen (3) during the second half of an NCAA college football game, Saturday, Oct. 24, 2020, in Bloomington, Ind. Indiana won 36-35 in overtime. Mullen was called for pass interference. 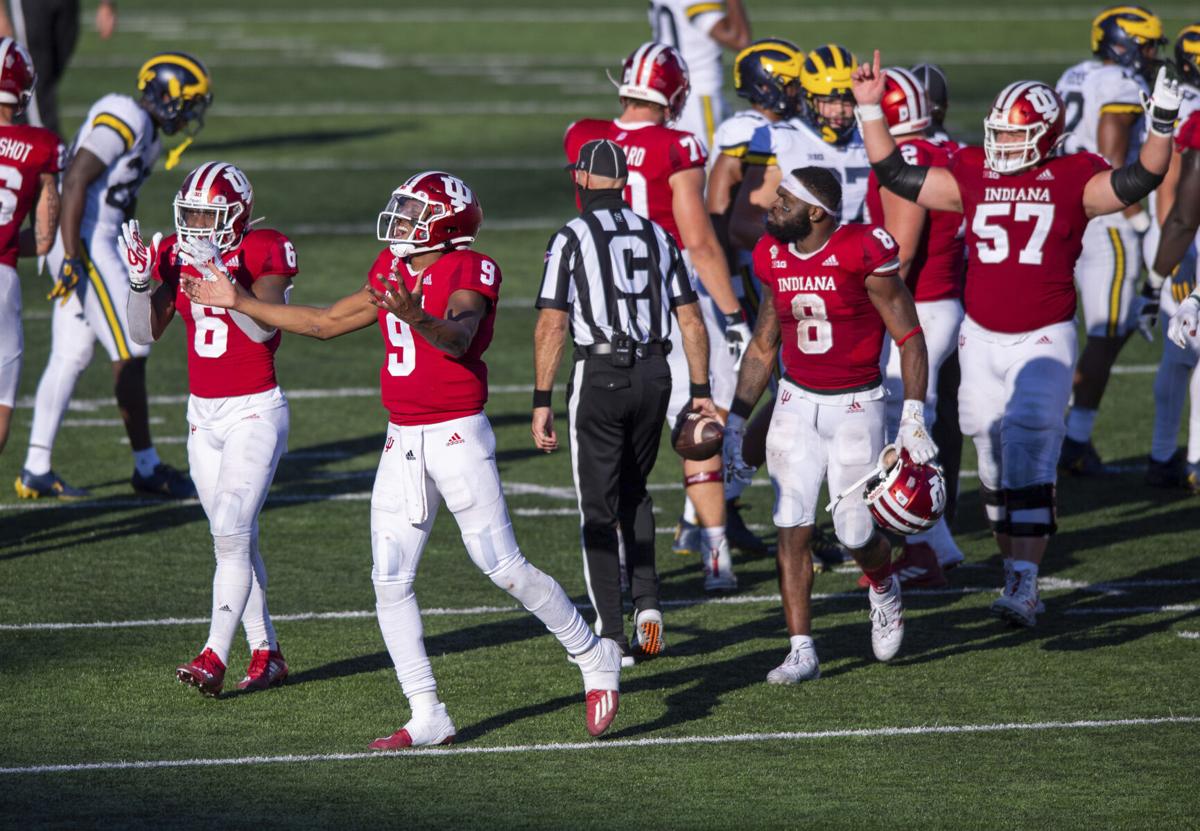 Most likely every Penn State fan watching 2020’s Week 1 matchup with Indiana remembers where they were as Hoosier quarterback Michael Penix Jr. extended toward the goal line to put the Nittany Lions away 36-35 in overtime.

Following its loss to Indiana, the blue and white lost its next four matchups to open 2020 0-5 for the first time in program history.

On Saturday, Indiana will return to Happy Valley as the Nittany Lions look to move to 5-0 with a win.

Just a year removed from finishing as the No. 12-ranked team in the country, Indiana hasn’t brought the same energy this season it did in 2020.

However, regardless of how the Hoosiers have played through four games in 2021, head coach Tom Allen is returning 19 starters, all who have beaten Penn State before and are likely more than willing to do so again.

Here is a look at some of the most game-changing athletes the Hoosiers will bring to Beaver Stadium Saturday.

A third-team AP All-American and first-team All-Big Ten selection in 2020, McFadden led the conference in sacks (6), tied for second in solo tackles (45) and finished third in tackles for loss (11).

Indiana’s defense is nothing without McFadden, the glue guy holding the secondary and d-line together.

The senior linebacker doesn’t look to have slowed down in 2021, already with two sacks, four tackles for loss, a forced fumble and fumble recovery through four games.

Against Western Kentucky last weekend, McFadden tallied a season-high 12 tackles — eight of which were solo — en route to Indiana’s 33-31 win.

Penn State accomplished the mission it sets its eyes on every week on Saturday, going 1-0 wi…

After three seasons as a secondary piece in Indiana’s receiving core, Ty Fryfogle broke onto the scene as the Hoosiers No. 1 wide receiver in 2020, defining himself as one of the most reliable deep threats in the country.

Previously splitting targets with now-departed Whop Philyor, who broke the 1,000 receiving-yard mark in 2019, Fryfogle had work to do if he wanted to take Indiana’s offense to the next level.

Finishing the season tied for third in the Big Ten in receiving touchdowns (7), fourth in receiving yards (721) and tied for ninth in receptions (37), it’s safe to say Fryfogle succeeded in 2020.

Like McFadden, Fryfogle was also named to the AP All-American third team and All-Big Ten first-team for his efforts last season.

Without Philyor in 2021, Fryfogle is taking on the heaviest workload of his college career and hasn’t shown quite the dominance he displayed last year — recording only one touchdown through four games.

However, Fryfogle’s slow play can be attributed to the inconsistencies of quarterback Penix Jr.

If Penix Jr. is on his A-game, then don’t be surprised if Fryfogle breaks out for a multi-touchdown game against the Nittany Lions.

There’s a reason Indiana led the Big Ten in interceptions last season with 17.

The Hoosier’s success in the secondary can be exclusively attributed to the leader of the defensive backs: junior Tiawan Mullen.

A first-team All-American in 2020, Mullen showed up everywhere for Indiana last season — whether it was in the secondary, collecting three picks, or in the backfield, tallying 3.5 sacks.

Beside Jaylin Williams and Jamar Johnson, Mullen and the Indiana secondary served as the Hoosiers’ most consistent unit in 2020.

While Johnson moved on to the NFL, Williams and Mullen are still active, having combined for five passes defended thus far in 2021.

With the two games remaining in his mostly dominant 2020, an ACL injury cost quarterback Penix Jr. from finishing the season on top.

Back under center for the Hoosiers this season, Penix hasn’t looked nearly the same as he did a year ago.

Having only thrown four interceptions all of 2020, the redshirt junior has already surpassed that mark, throwing six through just four games in 2021.

While his play has been disappointing to say the least, Nittany Lion fans know all too well about what Penix is capable of doing when he’s locked in.

As Saturday approaches, the nightmares of Penix’s Week 1 goal-line extension to defeat Penn State will return.

Coming off its biggest win of the season against No. 3 Ohio State, Penn State hits the road Wednesday to meet a talented Maryland squad.