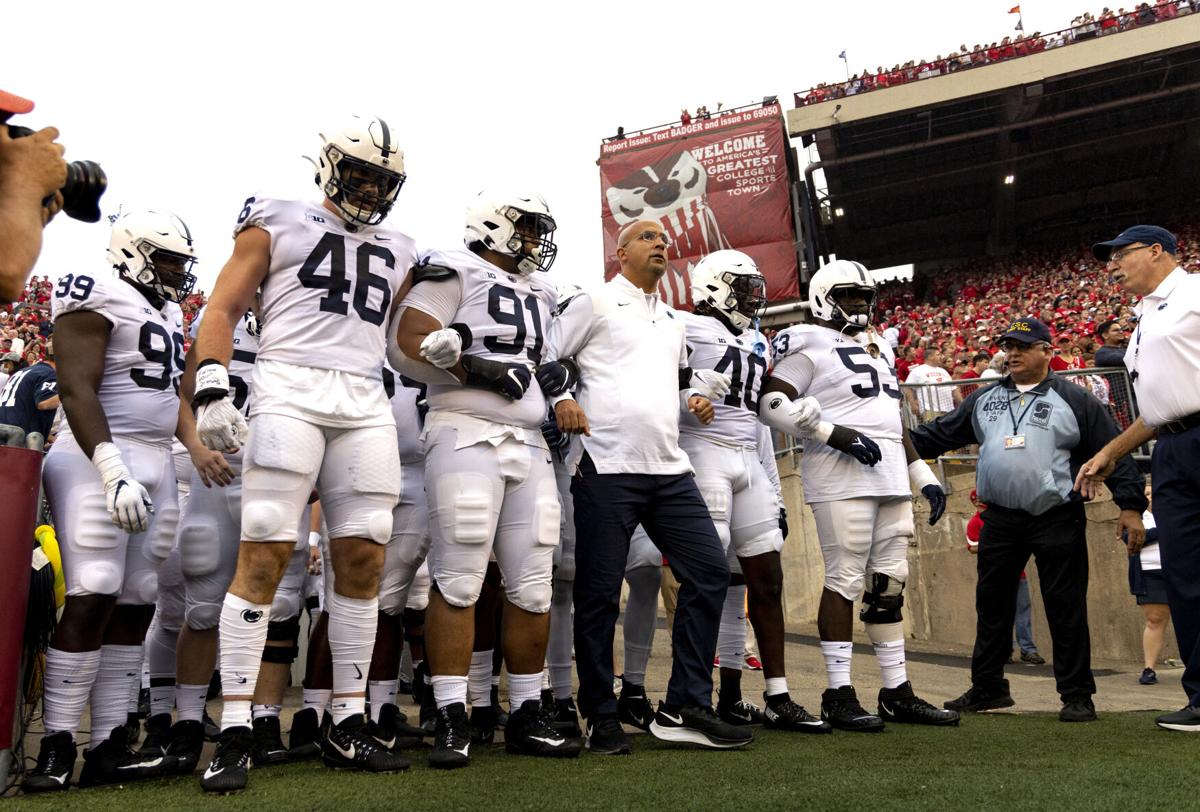 Penn State football’s head coach James Franklin and the team prepare to run onto the field before their game against Wisconsin at Camp Randall Stadium in Madison, Wis., on Saturday, Sep. 4, 2021. The Nittany Lions defeated the Badgers 16-10. 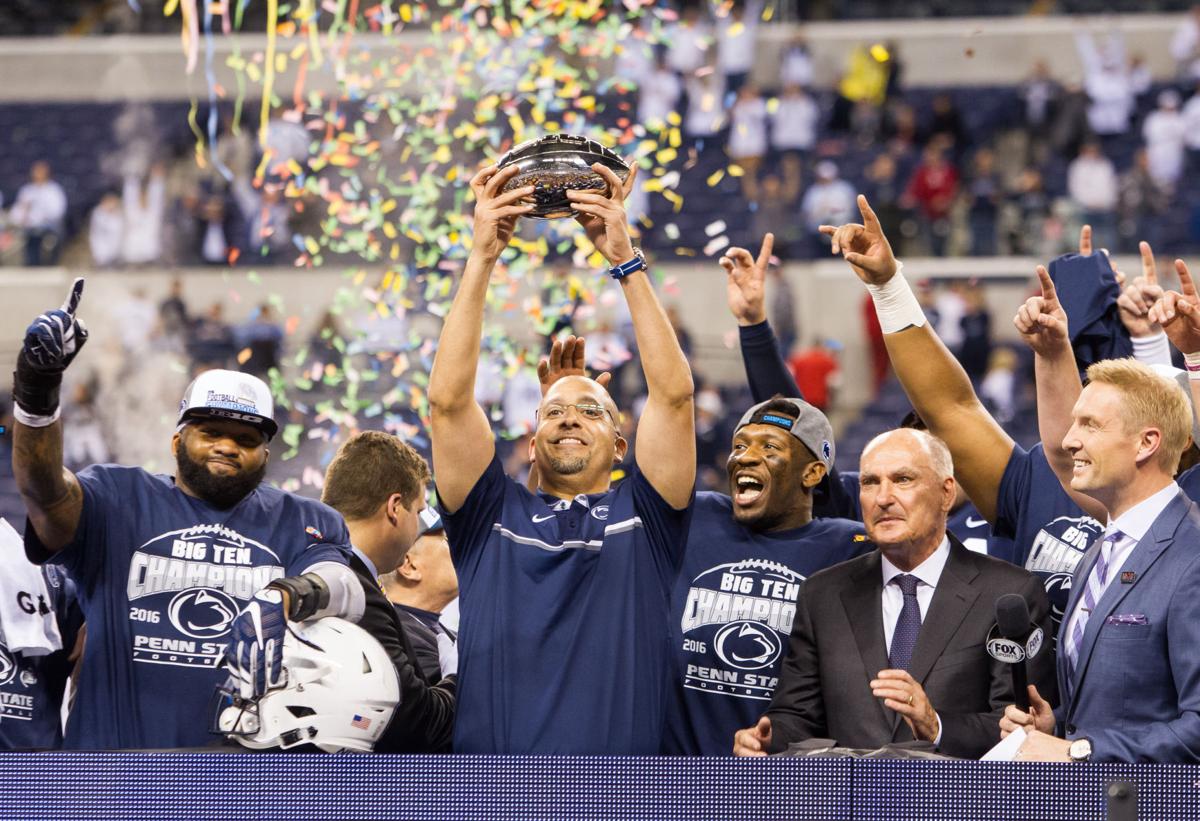 The USC Trojans are among the most prolific college football names out there, producing talents like Reggie Bush, Lynn Swan, Marcus Allen (not that one) and plenty of others.

But in the past few years, USC hasn’t been that same powerhouse, and Helton had been on the hot seat for a while.

Because of the pedigree USC has, big-time college football coaches’ names have been linked to the SoCal job ever since fans started to doubt Helton’s capabilities as the head man.

One of the top names on the replacement list? James Franklin.

Franklin has long been mired in speculation about the USC job — he’s a big-time personality for a big-time program located in Hollywood. His charisma and man-of-the-people MO would fit perfectly.

However, if Franklin is eventually offered the job, he’d be wrong to take it.

When the Joe Paterno era ended, Bill O’Brien was the man to take his shot at creating the next Penn State dynasty — until he wasn’t.

O’Brien left after just two seasons, and Franklin was brought in.

A lot could have gone wrong for Franklin when he took the helm of the Nittany Lions.

After back-to-back 7-6 seasons to start his tenure, Franklin’s seat was already heating up. Many weren’t sure if he was the man for the job, and he was unfairly being held to the standard Paterno set through the years, but that’s what happens at a program like Penn State.

The 2016 season may have not only turned around Penn State's legacy, but it also cemented Franklin’s.

He went from a muddling, mid-tier college coach at a top-tier program to a top-tier coach thanks to the 11-3 season and, especially, the Big Ten Championship.

Penn State’s name was back in people’s mouths, and the Nittany Lions were once again national contenders — under Franklin’s leadership.

The blue and white has added two more 11-win seasons and a 9-win season since 2016, and there haven’t been many questions as to whether Franklin is the guy since then other than clamoring for him to beat Ohio State, which he hasn’t done since that championship season.

The Nittany Lion faithful’s confidence in Franklin is strong enough now, though, that an abysmal 4-5 season in 2020 barely even raised questions as to whether he would be with the team moving forward.

Once again, Penn State is 2-0 to start 2021, including a big upset win on the road against Wisconsin, and there’s more excitement than questions surrounding the program.

Helton’s tenure at USC was only slightly different.

He came in under the shadow of prolific Trojan coaches like Pete Carroll and Jon McKay, but the expectations weren’t necessarily different than they were following Paterno’s legacy at Penn State.

Helton had two double-digit win seasons to start his time in the Sunshine State, and a 5-7 campaign after that left a blemish. But, he picked right back up with consecutive winning seasons again.

A 1-1 start and a loss to rival Stanford did Helton in this week. But why was there so much pressure?

Helton struggled to recruit in 2020, but he had a fruitful 2021 cycle with the Trojans set as the No. 7 class in the country, including the No. 2-overall prospect Korey Foreman.

He’s slightly lower for 2022, coming in at No. 29 right now, but that includes a pair of highly touted 5-star recruits.

He entered a brutal environment for a job, and he did that job well at the start, but he was cast aside as soon things got moderately rocky.

Back in Happy Valley, Franklin is the man, and he should be the man for as long as he wants to be.

Barring something unforeseen, the Penn State program isn’t falling off the map as long as he’s in charge.

He already dealt with high pressure and expectations at a big-time gig when he came to Penn State, and he navigated through it to be loved by the fan base now.

Even if USC offers him a larger contract, there’s not exactly much room for him to complain about his current deal, which is set to expire in 2025.

Franklin has done enough for the Penn State program to make him a Nittany Lion for life, and there’s absolutely no reason for him to ditch his stable post in Happy Valley where he’s well-loved for one as volatile and unforgiving as the USC opening.

Max Ralph is the football for The Daily Collegian. He is a sophomore majoring in journalism with a minor in sports studies.