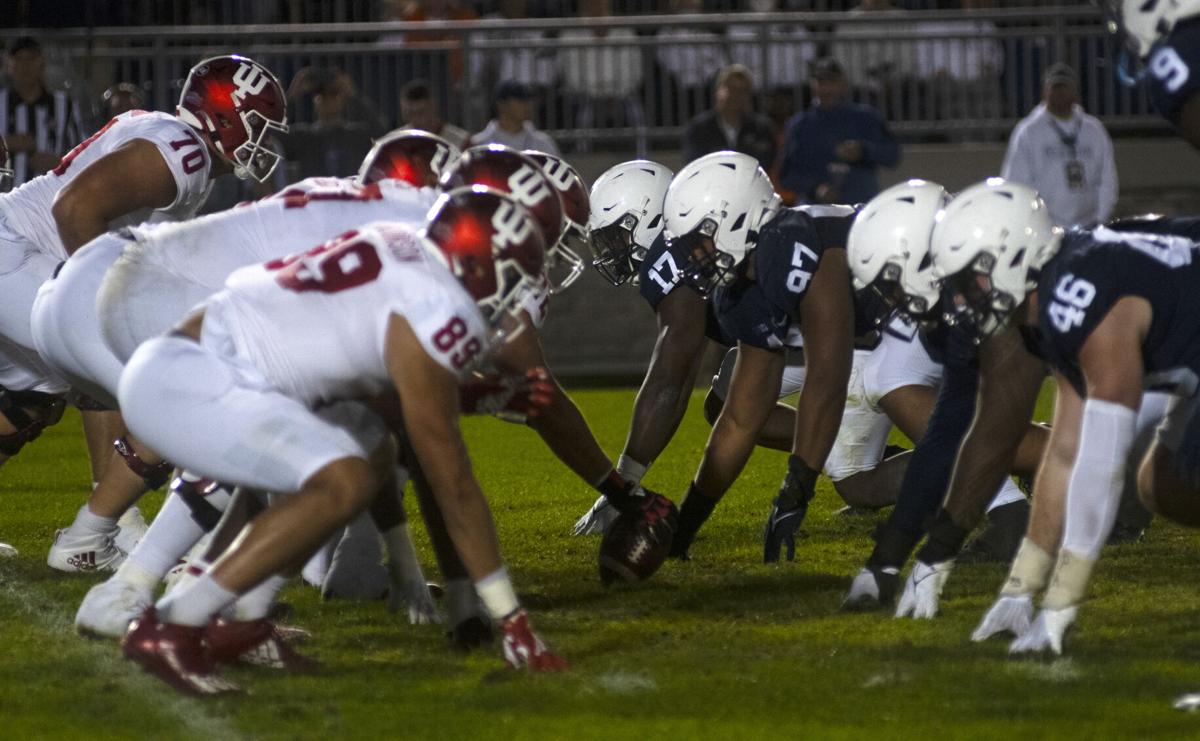 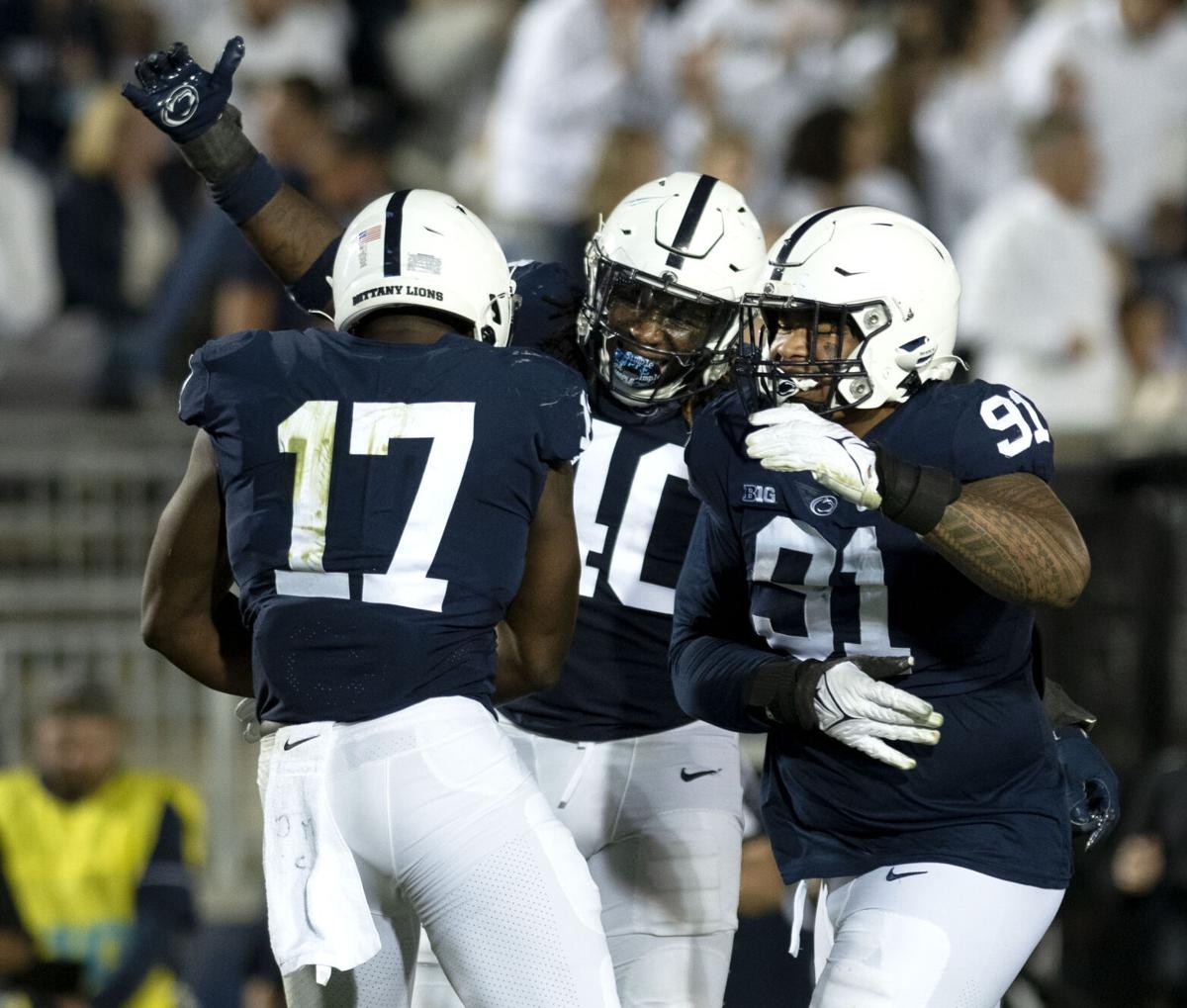 Members of the defensive line celebrate after a sack by defensive end Arnold Ebiketie (17) during Penn State football’s Stripe Out game against Indiana at Beaver Stadium, Saturday, Oct. 2, 2021. The Nittany Lions shutout the Hoosiers 24-0.

With a multitude of uncertainty surrounding the group entering 2021, Penn State’s defensive line has all but shattered expectations with its performance five weeks in.

Early in the preseason, defensive end Adisa Isaac — someone you could “pencil in” as the No. 1 defensive end, according to defensive coordinator Brent Pry — went down with a season-ending injury.

“Losing a guy like Adisa is tough, and it put a lot of stress on us,” defensive end Nick Tarburton said Tuesday. “Through that you have to figure out who we are and continue to get better each and every day.”

The loss of Isaac piled on top of the departures of three of 2020’s starting defensive linemen to the NFL or the transfer portal, leaving the Nittany Lions without a clear-cut plan outside of now-captain defensive tackle PJ Mustipher.

Suddenly after Week 1 in Madison, Wisconsin, there weren’t many questions surrounding the group anymore.

Pry and James Franklin brought in defensive end Arnold Ebiketie and defensive tackle Derrick Tangelo from the transfer portal, and they’ve each immediately inserted themselves into the starting lineup as significant contributors.

“It’s been awesome having those guys come in here. They fit in right away,” Tarburton said. “They’re both high-energy guys… They’re guys that are leaders. Whether it’s a physical standpoint, hustle standpoint, an effort standpoint, whatever that may be, they’re always giving their best each and every day.”

Opposite from Ebiketie, Tarburton has stepped into a starting role in his redshirt-junior year, and the well-documented transition from linebacker to defensive end has paid off handsomely for Jesse Luketa.

Tarburton said he’s “super happy” to have Luketa in the position group, but he’s been a lot more than just an extra body in the room.

“Bringing him down with us just adds a whole other dimension to our d-line,” Tarburton said. “[There’s] obviously great depth with him coming down, but as a whole, it just adds so much more.”

Ebiketie, Luketa and Tarburton have accounted for nearly every meaningful snap at defensive end this season.

While there’s technically only two starting defensive end spots, all three names appear on the Beaver Stadium video board before the start of a game.

According to Tarburton, having that flexibility at the end spot forces opponents to prepare for more looks each week and gives an advantage to the defense.

Having three players talented enough to be in the starting lineup is a testament to their preparation, too.

“It’s a credit to my guys — AK, Jesse and myself — how we work each and every week,” Tarburton said. “Basically any one of us on that field is gonna get the job done.”

Last week leading up to the Indiana game, Pry confidently said, “I like the play of those three guys right now,” and the job they’ve done in place of Isaac is a testament to their skill sets.

“All three of them are motor guys. They just play hard — one speed,” Pry said. “They’re all pretty instinctive guys, they’re mature guys and those three guys work their butts off every day. They’re great workers.”

As well as the group has played this year, though, Pry understands there’s a lot being asked from the trio.

Pry said he’d still like to see a fourth man step up in the rotation, but it’s murky as to where Penn State will find that.

Vilbert and Fisher have mostly contributed this season in blowout games, but Pry clearly needs them to play a larger role down the road.

Tarburton has also noticed improvement from the pair, but Fisher, who has transitioned from linebacker to defensive end like Luketa, has especially stood out.

“Week by week, both of those guys are continuing to get better, which is definitely helping us depth wise,” Tarburton said.

No matter who steps up in relief of the top guys on the defensive line, the group as a whole has largely blown expectations out of the water.

It went from one of the most adversity-laden groups in the offseason to one of the strongest in season, and it’s paying dividends throughout the roster as a whole.

From Tarburton to Mustipher to Ebiketie to Tangelo and finally to Luketa, the veteran group is embracing its role in the Nittany Lions’ 5-0 start.

“I think we all as older guys in the room knew it was our time to be [leaders],” Tarburton said. “I think as a whole, we’re one of the closer units I’ve ever been a part of, which just helps that grow even more. I think we’ve done a great job throughout this whole year with leadership.”

It’s been two years since Penn State last stepped foot in Kinnick Stadium, however, it feels…

Things haven’t gone as planned offensively for Penn State as it heads into the weekend with an 0-3-1 record.

Following his most recent three-touchdown performance against Indiana on Saturday, Penn State quarterback Sean Clifford has been named to the …

It feels like Penn State has already played in its fair share of big games less than halfway through the 2021 season.

Penn State has what could be its biggest game of the year on the horizon.