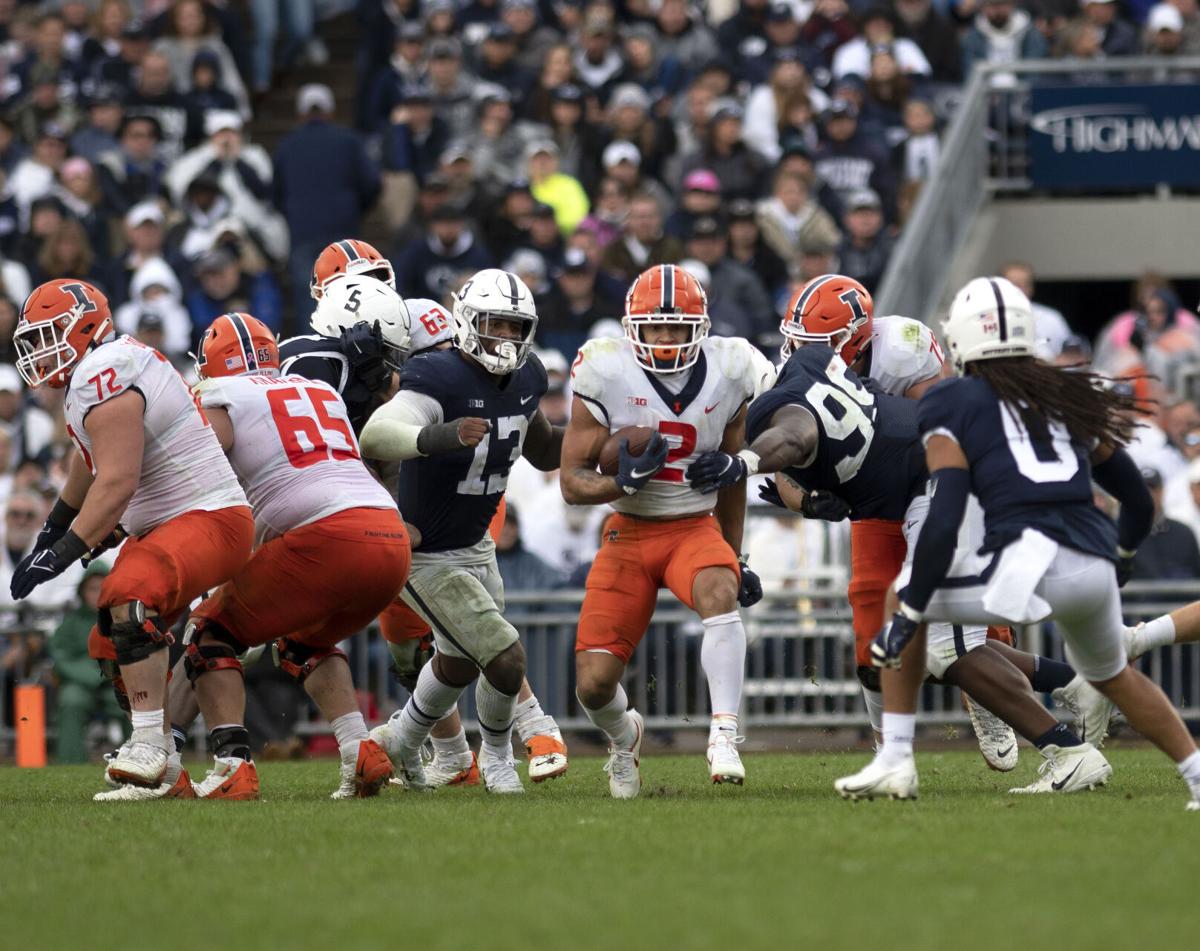 Penn State’s defense struggled against the Illinois rushing attack on Saturday to say the least.

The Fighting Illini’s Chase Brown set a Beaver Stadium record with 223 yards on the ground against the Nittany Lions, and his tandem partner Josh McCray went for 142 yards himself.

James Franklin said Tuesday that Illinois gave the defense a different look than it had seen on film in addition to already dealing with the loss of defensive tackle PJ Mustipher.

Here’s a deeper dive into Penn State’s struggle against Illinois.

In this play, Penn State got caught with a common theme throughout the day.

Defensive end Arnold Ebiketie probably couldn’t have made this tackle no matter what he did, but he made a mistake fighting his helmet inside of the tight end.

Illinois’ tight end’s first step was toward Ebiketie’s outside shoulder, which should have led to the defensive end trying to get to the edge and stretch the play. Instead, he was caught inside — exactly where the Illini wanted him to be and opposite from the flow of the play.

Linebacker Brandon Smith was caught with the same mistake. He scraped over the top of the offensive line, but he took a chance and slotted in behind the pulling linemen instead of trying to stretch the play to the edge.

Against a stretch run, the defenses job is to continually wash the play to the sideline. When you have players diving inside, that’s when you get gashed.

However, in a number of cases, Illinois simply won in the trenches more than Penn State did.

Here, the Nittany Lions were set up with one-on-one blocks across the board, and it’s an example of where the loss of Mustipher hurts the most.

Defensive tackles Coziah Izzard and Derrick Tangelo both struggled to get off single blocks, which allows more offensive linemen to free release to the second level and create lanes for big gains. If Mustipher is in, he likely demands a double team, allowing the Penn State linebackers to make more plays.

Defensive end Nick Tarburton did a nice job on the backside of closing his gap laterally, but Illinois got away with a bit of a hold that kept Tarburton from making the play.

In another outside zone, the Penn State defensive line did exactly its job, but Smith found his eyes inside once again.

Tangelo and Tarburton did a great job fighting to the outside shoulder and extending the play toward the sideline — it was originally intended to hit between the right guard and right tackle.

Like in the first play, though, Smith tried to take the inside gap and was caught up inside a mass of offensive linemen. If he would’ve recognized the ball was moving to the edge and scraped toward the sideline, the play could’ve been stopped for a much shorter gain.

And sometimes, the other team just makes a better play.

Illinois ran an extremely heavy package on numerous occasions Saturday, and it was a “wrinkle” Penn State wasn’t quite prepared for.

Late in the second half, the Nittany Lions made the correct adjustments and blocked up all of the front side gaps on this heavy-package play.

However, McCray just made a great cut toward the backside. There’s really not a lot you can complain about when the running back makes that good of a play.

Safety Jaquan Brisker had the best shot at filling the gap, but you can’t fault him for getting caught scraping toward the front side of the play because that’s where his keys told him to go.

Cornerback Tariq Castro-Fields had a good shot at making the play too and eventually missed a tackle on McCray, but anyone of his size would have a hard time taking down the 6-foot-1, 240-pound McCray.

Castro-Fields appeared to be sent on a blitz off the bat, so recognizing that he needed to close the edge down laterally would have been a tough task for the corner.

At the end of the day, Penn State only gave up 10 points, and that’s nothing to complain about on the defensive side of the ball.

The high yardage the Nittany Lions gave up on the ground, though, is concerning, and a combination of players not reading keys correctly, trying to do too much and the absence of Mustipher spelled disaster against the Illini.

Despite losing PJ Mustipher shortly into the game against Iowa, Penn State’s defense remained strong against the Hawkeyes, despite finding its…

When coach Carolyn Kieger took the podium, she was bullish about this Penn State group she has been gearing up for the upcoming 2021-22 season.

It has been a tumultuous few weeks within the Penn State football practice facility.