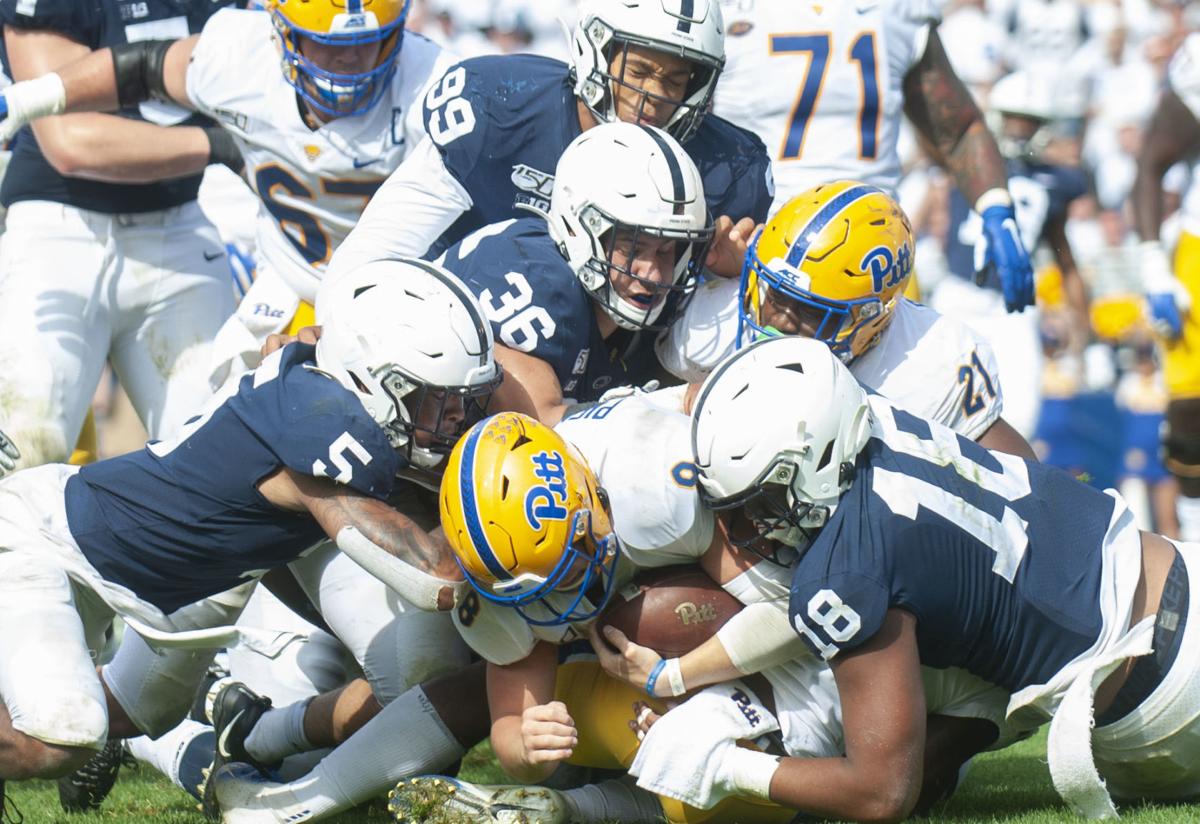 Cornerback Tariq Castro-Fields (5), linebacker Jan Johnson (36), and defensive ends Yetur Gross-Matos (99) and Shaka Toney (18) stop a run during the game against the University of Pittsburgh at Beaver Stadium on Saturday, Sept 14, 2019. No. 13 Penn State defeated Pitt 17-10. 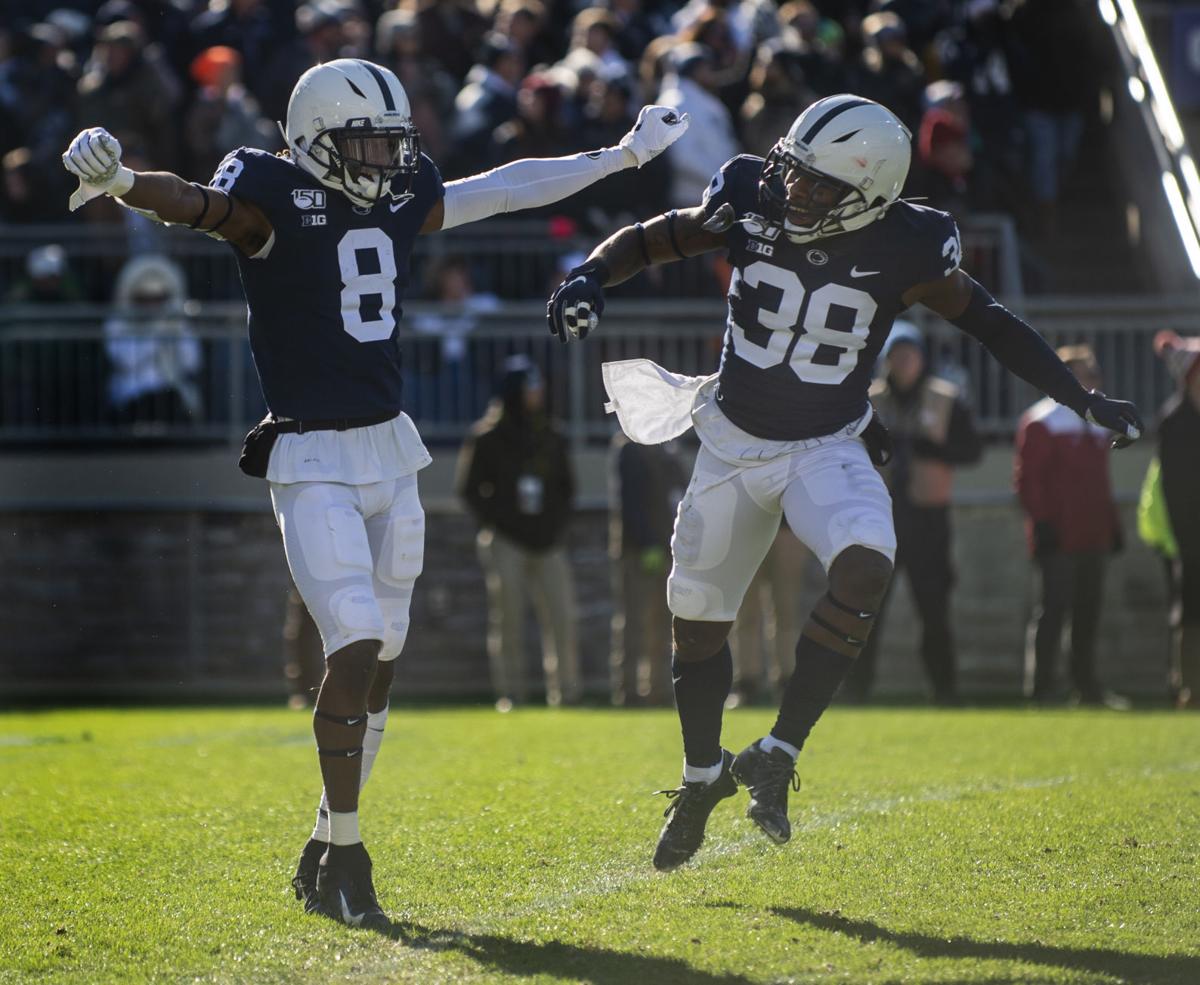 Cornerback Marquis Wilson (8) and safety Lamont Wade (38) celebrate recovering a fumble during the game against Indiana in Beaver Stadium on Saturday, Nov. 16, 2019.

Penn State’s defense, for the first eight weeks of the season, looked like one that could carry the Nittany Lions to a Big Ten championship and a berth in the College Football Playoff.

With bolstering talent and experience at every position, Penn State raced out to an 8-0 start, allowing 13 points or less in seven of its first eight games in the process, the exception being Michigan.

But after consecutive subpar performances against Minnesota and Indiana, this once-vaunted defense has shown chinks in its armor.

After surrendering 460 yards against the Gophers, Penn State’s defense gave up over 400 yards for the second straight week in a narrow victory over the Hoosiers. .

Penn State’s problems on defense start with the inconsistency of its pass rush.

Through 10 weeks, the Nittany Lions are 11th in the nation in sacks with 33, but more than half of those sacks came against a Purdue team with its backup quarterback at the helm and Idaho, an FCS program that was overmatched from the start.

Additionally, Penn State has only recorded three sacks over the past two games, a big reason for opposing offense’s success.

This isn’t due to a lack of talent up front, but opposing offenses have handled the defensive line as the season has progressed.

“If you watch the film, a lot of teams are getting rid of the ball fast,” defensive end Shaka Toney said. “They use a lot of mass protection. Teams aren't letting us just rush and tee off on their quarterback. They're coming into the game with a plan.”

Defensive tackle Antonio Shelton was a bit more blunt with his assessment of the pass rush.

“We need to do a better job of finishing sacks,” Shelton said. “That’s about it.”

That’s not to say that Penn State’s secondary has been without blame for some of the defense’s recent struggles.

The Nittany Lions are only allowing 240 passing yards per game, but sloppy tackling and some busted coverages were exploited time and again against the likes of Minnesota and Indiana.

“Obviously critical times magnifies it, as well, but those things have shown up, there's no doubt about it,” Franklin said. “It's a trickle-down effect. You may have a linebacker that misaligns, which affects the safety, which now affects the corner. One issue impacts the other. And vice versa.”

Earlier this week, James Franklin stated that his team knows that Ohio State is going to make big plays. It’s virtually unavoidable with a team that averages nearly 52 points per game.

And while Justin Fields, J.K. Dobbins and company haven’t faced much pressure over the course of the first 10 weeks, the Buckeyes have run over the competition.

But it’s how the Nittany Lions will respond to those potentially momentum-shifting plays that may very well decide the outcome on Saturday.

“They’re smart and they play together, they don’t make many mistakes,” Shelton said. “They’re very sound in their protections and solid at every level. We know that they’re great players and they’re a very good team, but it’s about how we respond when they make a big play.”

While question marks have arisen in recent weeks, Penn State’s defense is more than capable of keeping the Nittany Lions in the game.

However, it remains to be seen if this unit can turn things around against an offense of this caliber.