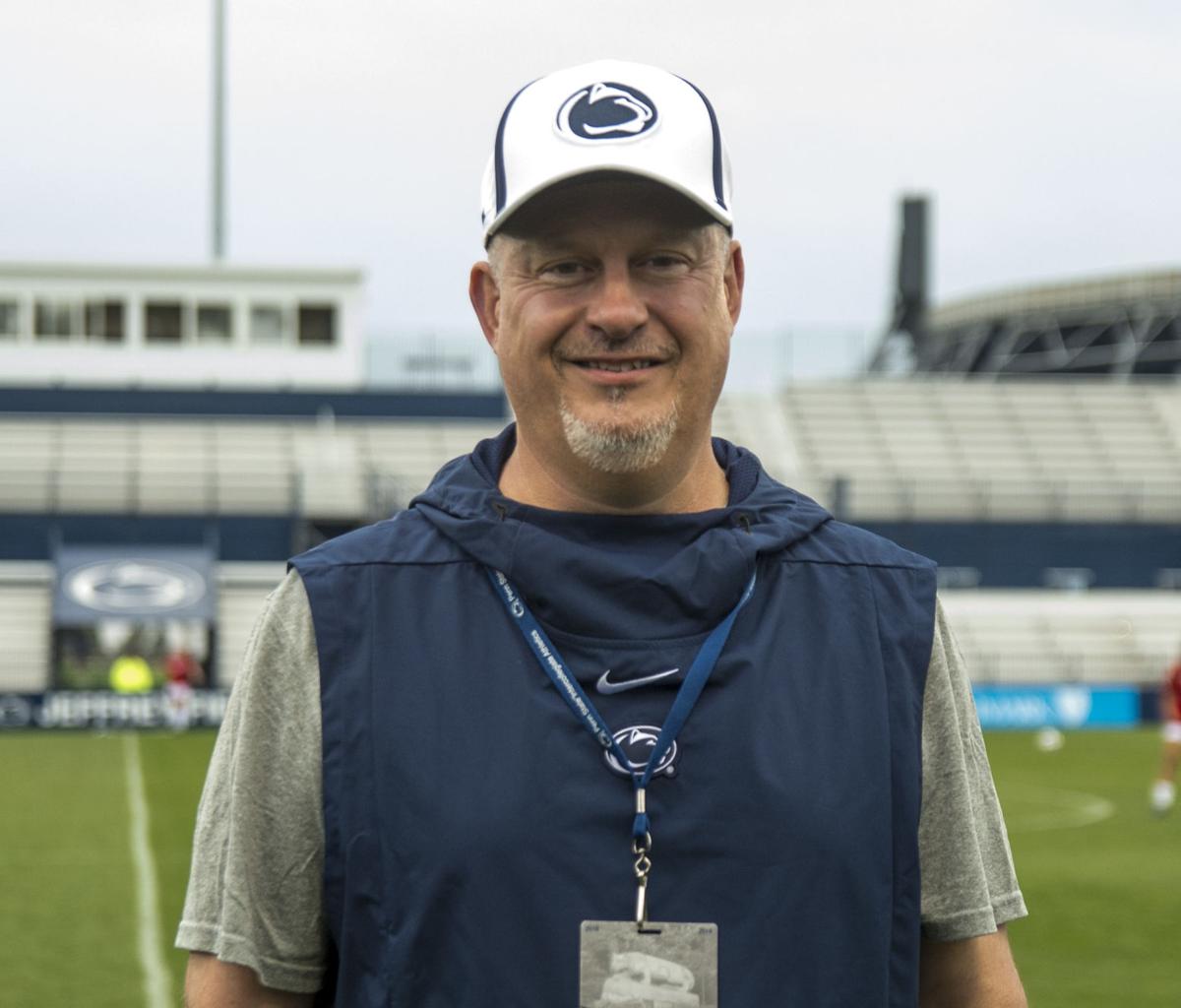 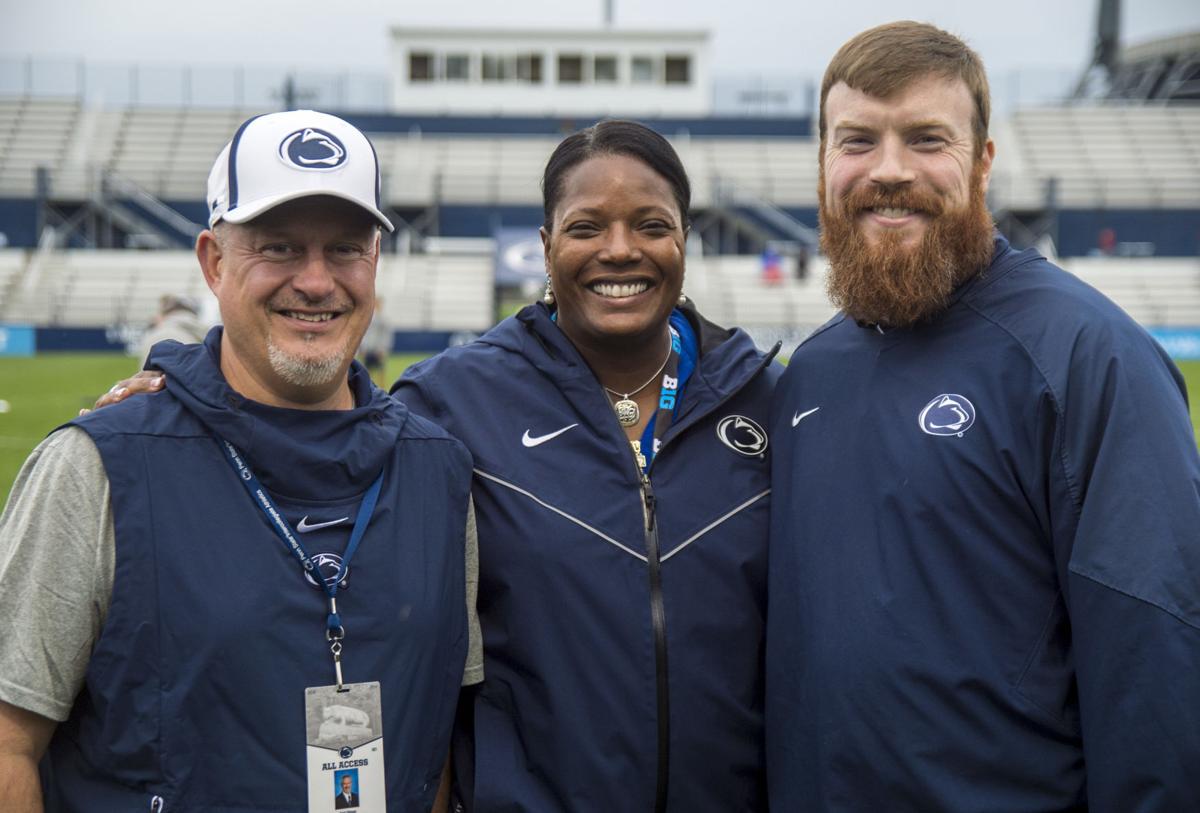 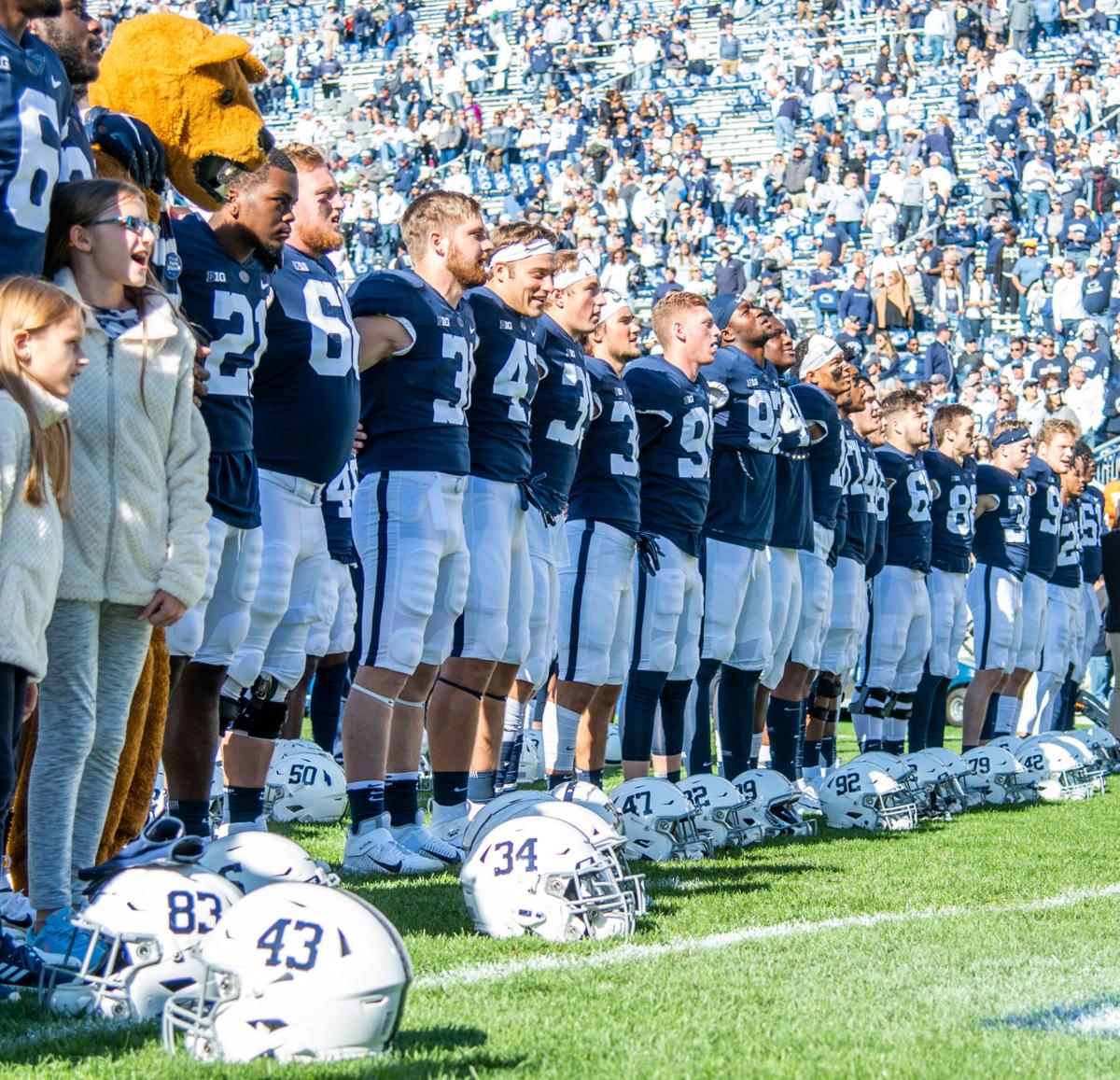 Penn State football players sing the alma mater arm-in-arm after the football game against Purdue at Beaver Stadium on Saturday, Oct. 5, 2019. The no. 12 Nittany Lions defeated the Boilermakers 35-7. 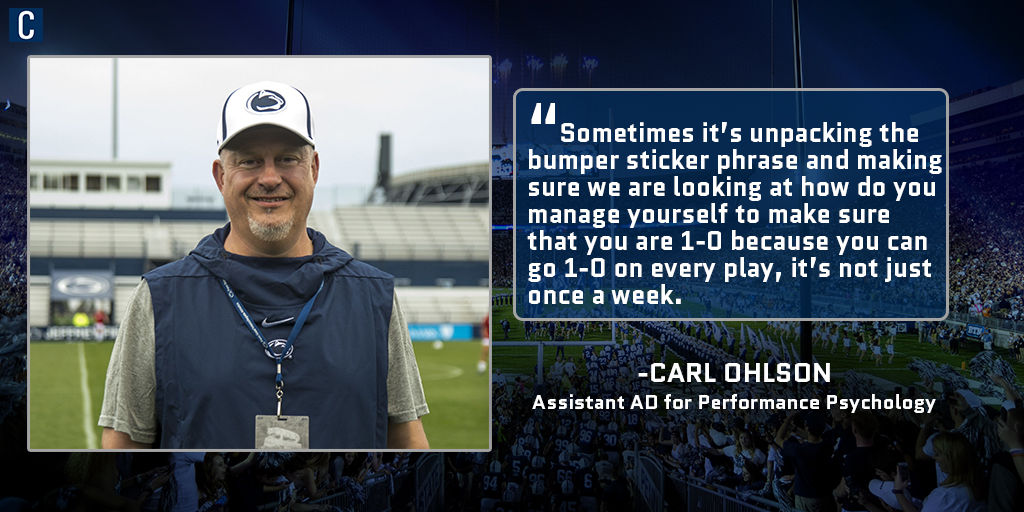 Every Saturday, as Penn State gets ready to retake the field for the second half, James Franklin echoes a message to his players.

It’s a phrase that makes sure the team is focused on the final 30 minutes of the game, no matter the situation.

Franklin is developing the psychological performance aspect of his team and it’s not something that happens overnight — it’s something that takes time.

And for Carl Ohlson, Penn State’s assistant athletic director for performance psychology, it has been something he has been building and establishing since he was hired at Penn State in August 2017.

Ohlson has worked hard with the Penn State coaching staff to breakdown the meaning behind its token phrases, one of which being Franklin’s constant message to the team before they leave the locker room for the second half that the game is 0-0.

“Sometimes it’s unpacking the bumper sticker phrase and making sure we are looking at how do you manage yourself to make sure that you are 1-0 because you can go 1-0 on every play, it’s not just once a week,” Ohlson said. “So it’s 1-0, the 0-0 mentality, it is coming out with a mindset before anything happens and then effectively managing yourself moment, by moment, by moment.”

His work with the Penn State football team all started with a conversation with Franklin and the rest of the Penn State coaching staff. That has made the Nittany Lions an “ideal setting” for Ohlson to teach.

“They have forgotten more than I’ll ever know about football and they are very wise and they are very curious,” Ohlson said. “This is a learning growth mindset coaching staff which is fantastic. If we brainstorm what could be some ways that we can do this, that’s kind of the nature of the conversation."

And a lot of the lessons that Ohlson brings with him comes from his unique background.

About halfway through his time with the army, they selected him for a sports psychology degree and he ended up at West Point, where he did applied sports psychology work for athletic, academic and military applications.

“Back in 1996, I’m starting to work at West Point looking at all these different performance contexts where it is high stakes, the outcome matters, the outcome is not under your control, in those situations you have to be really good at managing yourself,” Ohlson said. “Performance psychology transcends sport.”

Now, in his third year at Penn State, Ohlson’s techniques have been passed from coaches to the players, and his lessons are found throughout the program in the little things that players say and do on a daily basis.

Jan Johnson, a senior linebacker, talked about the mental challenge that football presents in moving on from a play whether the result is good or bad. For Ohlson, the learning of this skill is essential in order for teams to find success.

Ohlson has coined the term “win the next moment” when talking to the Penn State football program — and it's something that you can see has been taken to heart and is reflected every time the Nittany Lions step onto the field.

“You can’t win a football game all at once but you can win in small moments.”

But it doesn’t come without challenges.

Ohlson pointed out two main implications for achieving this mindset.

The first was distractions. He labeled distractions as personal feelings, thoughts, the crowd or in general other things going on in your life.

The second complication he cited was that people, under pressure, default to what they know best.

In order to maintain focus and compete at the highest level, a plan on how to handle it is needed.

The best way to do this, according to Ohlson, is through visualization.

“If you are walking around campus and visualizing, ‘Here is how I am going to manage myself in good moments and in adversity’ and the more you can think about it, the more likely you are to approach that behavior when it matters,” Ohlson said. “If you wait until you are in the heat of the moment, you aren’t going to think that through.

“That logic and reason part of the brain is kinda getting hijacked in there so you want to make sure that you are putting together a blueprint that you believe in and practice and that you take it to practice and you take it everywhere you go,” Ohlson continued. “I tell the guys all the time, ‘you can practice the self regulation skills everywhere you are, everyday and nobody even knows you are doing it.’ That is putting something in place that you can call on when you need it.”

“We talk about a bunch of different scenarios that you can go through in your head to prepare you for the game,” Clifford said. “So before games, I’ll go through scenarios in my head, trying to prepare me for what’s going to happen and whatever that game plan is, I’ll take that and go through different scenarios of what looks they can give us for this play, or this formation or what I think the main coverages are and how that will affect this pass play.

“Those types of things Carl has done a really good job with helping me with visualization and preparing me for these tough environments and tough situations.”

This idea of visualizing, taking mental reps and looking at the psychological impact of sports is something new to Clifford, and something he thinks is uncommon.

“People don’t really think of, ‘Alright, I'm going to do 30 minutes a day of visualizing success on the field.’ It’s hard to see that in a normal job or something,” Clifford said. “It’s not talked about a lot so that was the main thing with me was learning these techniques."

“I did it subconsciously a bunch throughout my life but at the same time, it was just forming new habits and different ways that Carl knows what’s good practices and what’s not so that way you are prepared as you can for Saturdays.”

At the end of the day, the process, the conversation with coaches and all the teaching comes down to one thing — giving Penn State’s athletes the best tools and training to compete at the highest levels they can mentally.

And for Ohlson, this game day preparation comes down to two things — core values and mindset.

The core values serve as the identity and how players go about their business and is harder to mold.

The mindset, on the other hand, is a choice.

“The beautiful thing about a mindset is that you bring it with you before anything happens,” Ohlson said. “So deciding on Tuesday, that everything you do on Tuesday is going to make you more prepared for Saturday. That’s better than, ‘I’ve got to get through practice.’

“So that Tuesday, Wednesday, Thursday, the mindset moment by moment, day by day is to get the most out of yourself with the trust that the work is preparing you for a big moment and you prepare in little moments for big moments.”

This is reflected in Franklin’s view of practice. Everything Penn State does is for a purpose. There is no time wasted while the Nittany Lions are on the practice field.

This is how players build habits that carry them to success on the field.

But just like everything else, it isn’t foolproof and human nature still gets in the way.

“Can you being 100 percent of whatever you got? Because that is what happens on Saturday,” Ohlson said. “You are going to get beat around, it’s a physical game, it's a collision sport like no other, your going to get tested again and again.

“At some point, you aren’t going to have 100 percent left but can you bring everything you have?”

Ben Ferree is a sports columnist for The Daily Collegian. He is a senior majoring in broadcast journalism.