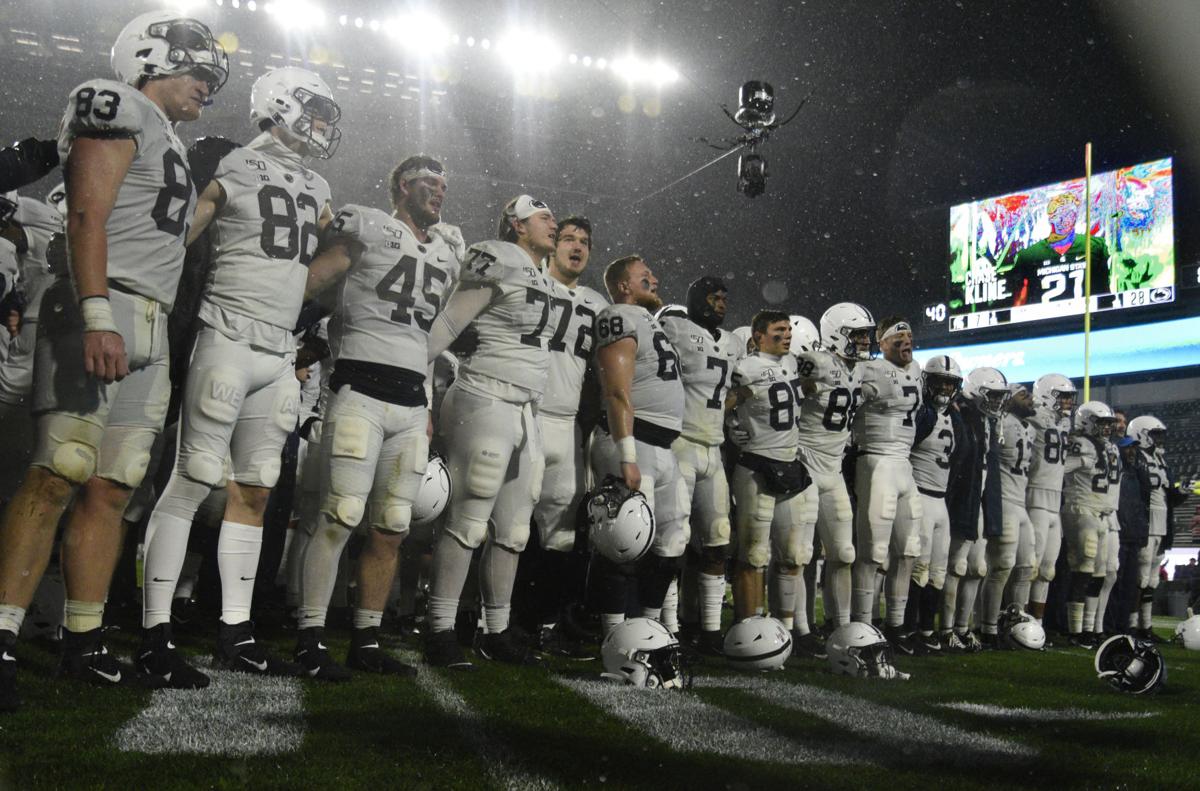 The Nittany Lions sing the alma mater after the game against Michigan State at Spartan Stadium in East Lansing, Mich. on Oct. 26, 2019. The No. 6 Nittany Lions defeated the Spartans, 28-7. 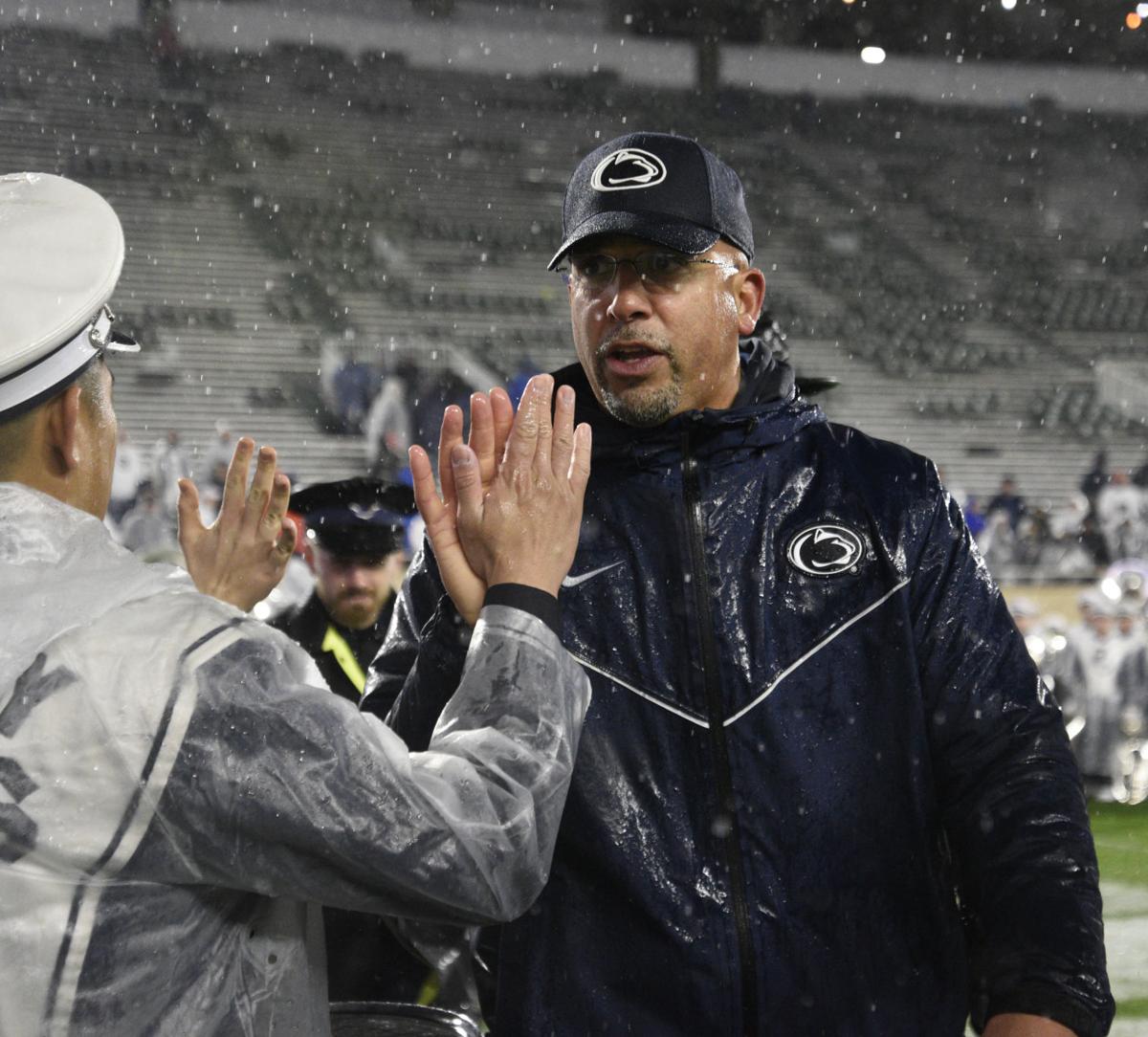 Head Coach James Franklin high-fives Blue Band members after the game against Michigan State at Spartan Stadium in East Lansing, Mich. on Oct. 26, 2019. The No. 6 Nittany Lions defeated the Spartans, 28-7. 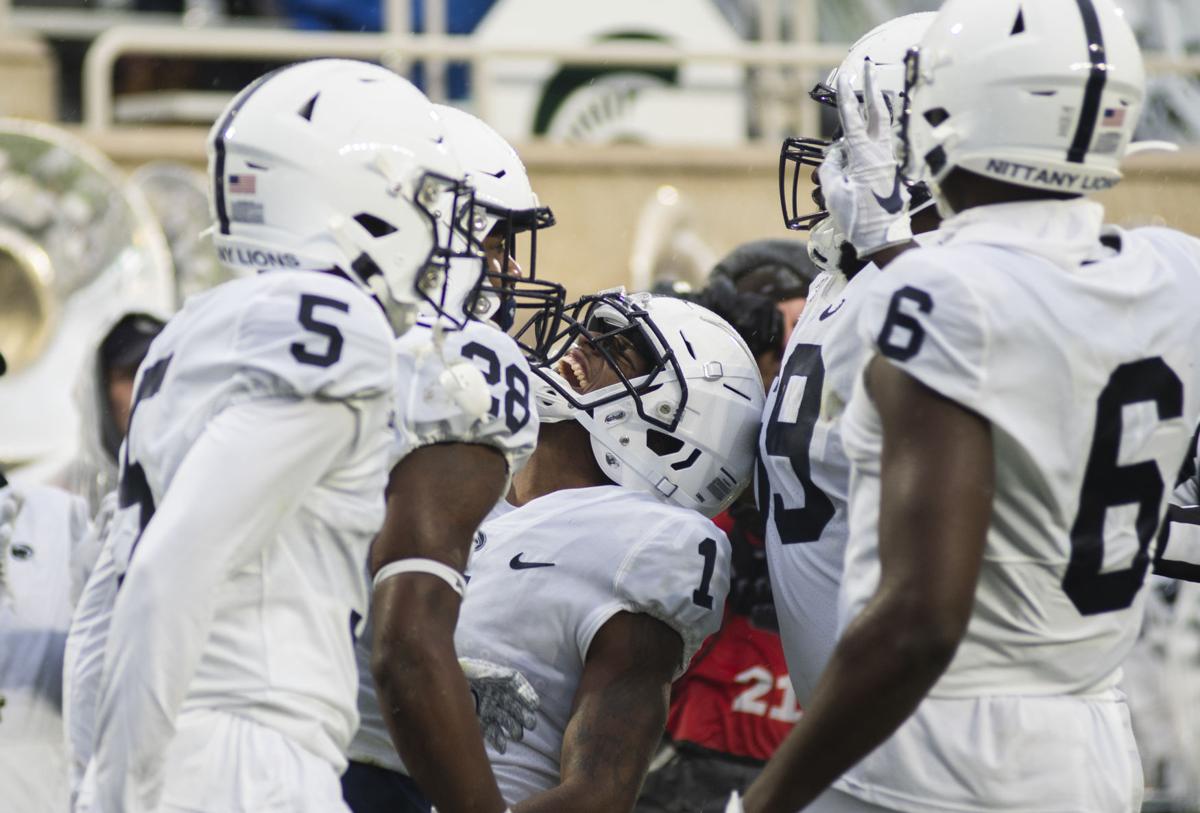 Wide Receiver, KJ Hamler (1), celebrates with the team after a touchdown during the game against Michigan State on Saturday, Oct. 26, 2019. Penn State defeated Michigan 28-7.

EAST LANSING, Mich. — James Franklin could easily be accused of having tunnel vision.

For eight weeks, Franklin has addressed the media after a Penn State victory, placing the same level of importance on each win.

The mentality of “We’re 1-0 this week” has become synonymous with Franklin’s process-oriented mentality, so much so that it’s something that is joked about amongst fans and members of the media alike.

But after the Nittany Lions dispatched Michigan State in soggy East Lansing on Saturday, Franklin took a few moments to reflect on how his team has handled its most difficult stretch of the season to date.

“We’ve just played three really challenging games,” Franklin said. “You talk about winning a game against Iowa at Kinnick Stadium — a place that has been a house of horrors for other teams — that was huge for us.”

“Then we played a tough, physical, emotional game against one of the most talented rosters in the country in Michigan, and then we had to come back and do it again the next week against a good team in these kind of conditions.”

As much as he tries not to think about it, Franklin and his team have known about the importance of this midseason stretch in October for a long time.

“I want everyone to take it one game at a time, but we know that every single one of our 700,000 alumni, and [the media] looked at this three-game stretch on our schedule,” Franklin said. “We knew this was going to be a challenge and for us to be able to get through it and get into this bye week is really important.”

The fact of the matter is that Penn State is off to an 8-0 start for the first time since 2008, a season in which the Nittany Lions won the Big Ten and advanced to the Rose Bowl.

Thanks to a timely bye week, this program will head into November without a loss for the first time in over a decade, and has a chance to be 9-0 for the second time since 1999.

Each win brings this team closer to rarified air.

“Just to be 8-0 is an amazing feeling,” junior cornerback Tariq Castro-Fields said. “Not a lot of teams in the country can say that so I’m proud of our team.”

However way you slice it, the Nittany Lions have overachieved to this point.

At the current juncture in the season, Penn State is one of the nine remaining unbeatens in college football. After No. 5 Oklahoma fell to Kansas State earlier in the day, it’s likely that the Nittany Lions will break into the Top 5 of the AP Poll on Sunday.

Franklin’s team is in the thick of the College Football Playoff hunt, but you wouldn’t know it from talking to him.

“I’m a process-oriented guy so we don’t talk about the rankings and things like that,” Franklin said. “We’re aware of it as coaches, but we don’t address it when talking to the team. I’m proud of how we’ve handled [the pressure] to this point.”

Before the start of the 2019 season, it was easy to pencil in at least one loss for a young Penn State team during this difficult stretch of games against programs that have historically played well against the Nittany Lions.

With a first-year starting quarterback at the helm of an inexperienced offense, this team didn’t seem to possess the talent or experience needed to put itself in contention for a Big Ten Championship, especially on the offensive side of the ball.

But what Penn State has done during the month of October is put forth performances that exemplify Franklin’s constant week-by-week mentality.

As the 2019 campaign approaches its dramatic final month, it’s safe to say that this process is working.

“I think what’s different with this year’s team — especially compared to last year’s team — is that we really buy into coach Franklin’s mindset of taking things week by week,” tight end Pat Freiermuth said. “So [earlier in the season] we knew that this was a tough stretch of games coming up, but I think we really just focused on getting that one ‘W’ each week.”