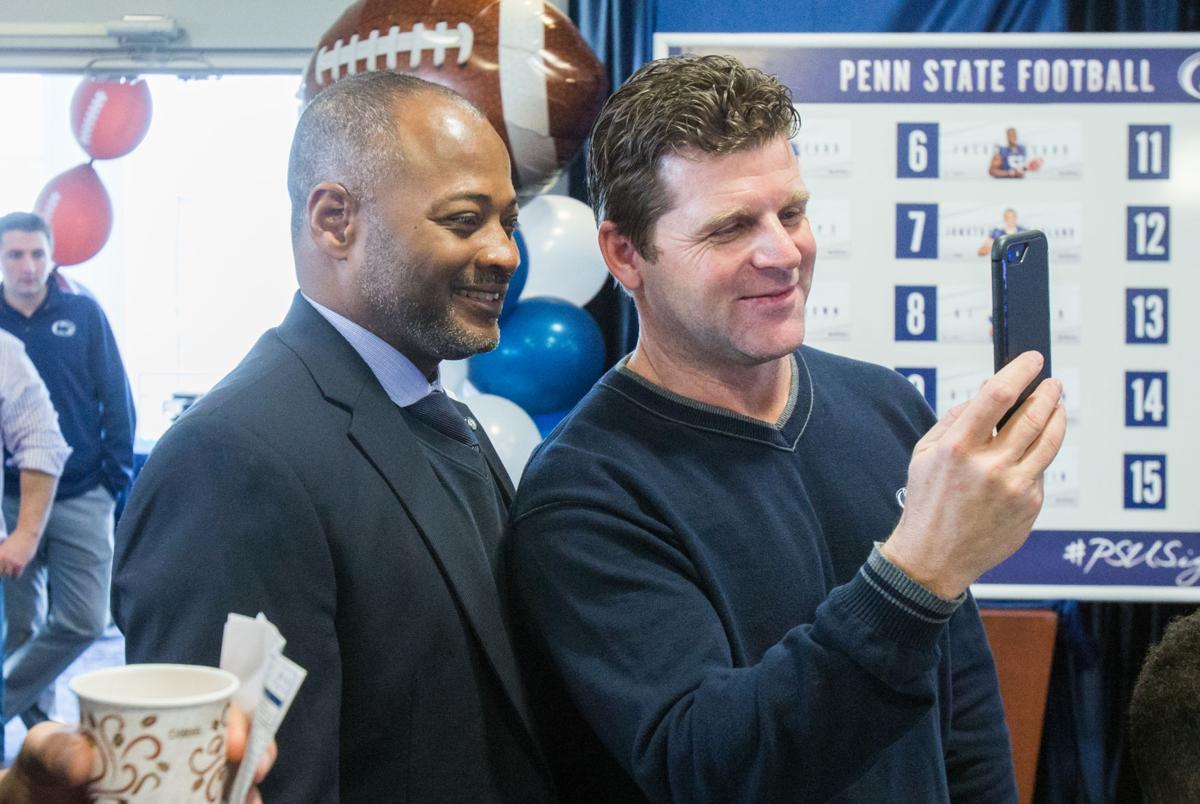 Penn State assistant coach Terry Smith, left and defensive coordinator Brent Pry, right, video chat a recruit during National Signing Day in the 'war room' at the Lasch Football Building on Wednesday, Feb. 1, 2017. The coaching staff contacted future players and their families as letters of intent were received throughout the morning. 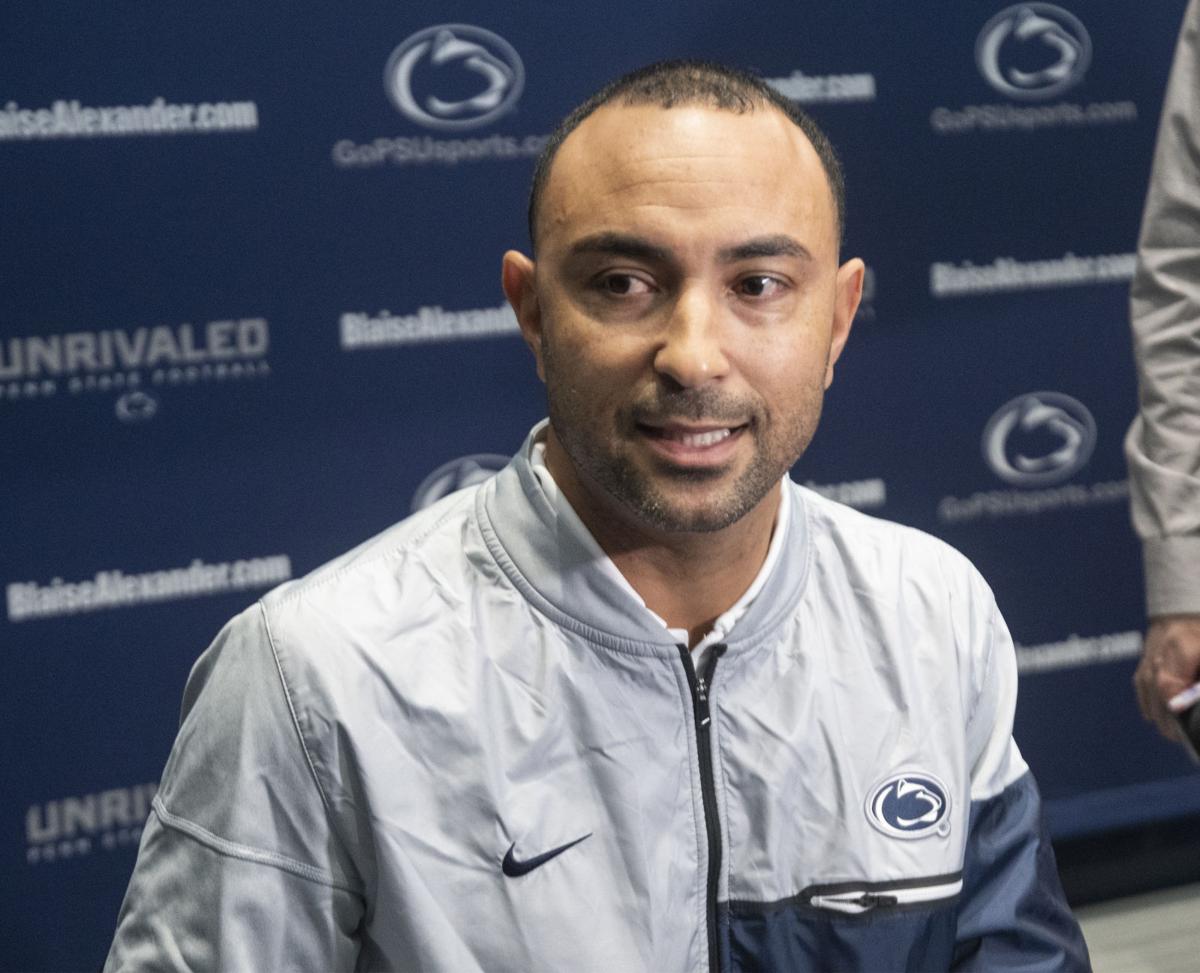 Penn State’s 2022 recruiting class has been one of the deepest classes in James Franklin’s tenure as head coach.

Currently sitting at No. 8 in 247Sports’ team recruiting rankings, the Nittany Lions haven’t enjoyed this level of success in the recruitment field since 2018 — a year that brought names like Micah Parsons, Pat Freiermuth and Odafe Oweh to Happy Valley.

When looking at the Penn State coaches who pieced together that 2018 class, many of those names are either no longer a part of Franklin’s program or have shied away from their same level of involvement in the recruiting circuit.

Coaches like Sean Spencer, Ricky Rahne and Matt Limegrover all found themselves having major success in 2018 but have moved on to other coaching jobs within the football world.

Penn State’s top two recruiters from 2018, defensive coordinator Brent Pry and running backs coach Ja’Juan Seider still hold the same titles, but they have not yet made major marks in terms of recruiting for the class 2022.

Instead, a new series of names have emerged as the leading recruiters hoping to outdo their 2018 counterparts and land the Nittany Lions in the top-five recruiting teams for the first time in Franklin’s career.

Here is an analysis of Penn State’s top five recruiters for the class of 2022.

As the associate head Coach and co-recruiting coordinator, Penn State cornerbacks coach Terry Smith has a lot on his shoulders when it comes to recruiting success.

To put it simply, Franklin is the face of the program, but Smith is really the guy pulling all the strings of recruitment.

To have four commitments to your name at this point in June is more than respectable on its own, but with three of them being 4-stars, Smith is doing something remarkable in Happy Valley.

There’s still a long road ahead on the circuit, but Smith currently ranks as the No. 5 recruiter in the Big Ten and No. 14 in the nation.

Entering his second season as Penn State’s wide receivers coach and working his first year as the program’s offensive recruiting coordinator, Taylor Stubblefield has electrified the 2022 recruiting trail for the blue and white.

With 3-star wide receiver Tyler Johnson’s commitment on Monday, Stubblefield is responsible for bringing in three out of the Nittany Lions’ four 2022 wide receiver commitments.

With Ivey and Saunders’ commitments both tied to Stubblefield, make that two top-200 wide receiver commitments for the coach thus far.

In his first opportunity to make an impact for himself in Happy Valley, newly hired offensive coordinator Mike Yurcich has not disappointed recruiting wise.

Before even calling a play in a game for the Nittany Lions, Yurcich has brought in two illustrious recruits who could play an impactful role in Penn State games for years to come.

His second commitment, 4-star quarterback Drew Allar, pretty much silenced any worries of Penn State’s future talent at the position.

The Nittany Lions have struggled to find a true star to lead their offense since Trace McSorley left the program in 2018, but there’s a chance either Allar or Pribula could be the next great gunslinger to take charge of the blue and white.

After playing a part in the recruitment of Penn State’s No. 1-ranked recruit for the class of 2021 — offensive tackle Landon Tengwall — second-year offensive line coach Phil Trautwein has established himself as a legitimate threat to schools as a recruiter in 2022.

So far, Trautwein has notched two commitments as a primary recruiter, snagging Penn State’s No. 2-ranked recruit Drew Shelton and 3-star Maleek McNeil — both of whom are offensive tackles.

At 6-foot-7, 295 pounds, McNeil is an intriguing pickup for the Nittany Lions. However, it’s Shelton who really amplifies Trautwein’s resume as a recruiter.

It’s not just the fact that Shelton’s an incredibly talented prospect that makes his commitment impressive, it’s the fact that he is an IMG Academy product and a native of Florida — a state that seldom grants recruits to the blue and white.

With Shelton making his way to Happy Valley, there could potentially be more IMG athletes to make their way to Penn State in the near future.

If this happens, Penn State can thank Trautwein for starting the trend.

The Nittany Lions have earned commitments from four 4-star tight ends from 2018 to 2021.

It’s likely that a good portion of these commitments can be attributed to former Penn State tight ends coach Tyler Bowen, who is now in the same position under Urban Meyer’s Jacksonville Jaguars staff.

With Bowen being arguably the most established tight ends coach in college football — impressing on both the field and as a recruiter — replacing him is likely not the easiest task.

After a one-year 4-star tight end drought, Penn State received its first since the class of 2020 with Jerry Cross’ commitment last July.

Howle was the primary recruiter for Cross and is bringing in a vocal leader for the class of 2022.

Heading into the 2020 season, there was hope that Penn State quarterback Sean Clifford could take the next step in his progression as the Nitt…

In 2020, there weren’t many positives to take away from Penn State’s disappointing 4-5 season.