As of Sept. 10, just two weeks into the fall 2016 semester, there were five Timely Warnings concerning sexual assault.

Sexual assaults are not the only crimes that Timely Warnings focus on, however, they make up the majority of those sent to the Penn State University Park community.

“To some people, especially survivors of sexual assaults, the details on the Timely Warnings can be triggering, upsetting or frustrating,” Erin Farley, the programming coordinator for Penn State’s Center for Women Students, said. “At the same time some people are happy they are creating awareness.”

The Timely Warnings system is mandated by the Department of Education’s Jeane Clery Disclosure of Campus Security Policy and Campus Crime Statistics Act.

According to the Clery Act website, the act applies to all universities and colleges that receive federal funding. It requires the universities to disclose information about crime on campus and inform the public of crimes in and around campus. The Act requires universities to alert campus communities about possible ongoing threats with Timely Warnings.

As far as the information included in a Timely Warning is concerned, those for sexual assaults are the most variable.

From the spring 2015 semester to Sept. 10, there have been only six Timely Warnings regarding general crimes, and 44 regarding sexual assault.

All six Timely Warnings have a description of the perpetrator, which at least included the sex and race, an approximate or exact location, the date and timeframe the crime took place in and a description of what happened. All were reported within a few days of the incident.

Timely Warnings regarding sexual assaults may or may not include the date it occurred, a timeframe for the assault, a location of the assault, a description of the perpetrator, the sex of the victim and their relationship to the university, details of how the crime was reported or details about the assault itself.

For example, one Timely Warning that was sent out on April 6, 2015 only detailed that someone was sexually assaulted by someone unknown to him or her at an undisclosed fraternity house on or near campus. No other information was offered by the police.

Whereas the most detailed Timely Warning regarding a sexual assault by an unknown individual, was sent on July 31, 2015 and included not only a detailed description of the incident, but also detailed that the assault occurred in the K hallway of the Simmons Hall Complex with a photograph of the suspect in addition to detailed description.

The reason that Penn State may send out a Timely Warning before all the details of the crime are available is because the Clery Act requires to alert their communities of potential threats, as soon as any relevant information is available.

Tracie Bogus, Penn State’s Clery Compliance Coordinator, said there currently is more pressure for Penn State to comply with the Clery Act; the Department of Education is still investigating the university in relation to the Jerry Sandusky sex abuse case.

She said if Penn State is found by the Department of Education to not be in compliance with the Clery Act, the university could be fined as much as $30,000 per violation and may have its participation in receiving some federal funding limited.

“We just have to balance the struggle between the spirit of the law and the letter of the law,” Bogus said. “The most important thing is the spirit, which is protecting and informing the community — that is the biggest challenge.”

Bogus said generally if the college has relevant information that will help inform and protect the community, they will disclose it.

Timely Warnings never list the names or exact locations of fraternities even if they do have the name, and they never list the exact room in a residence hall where a sexual assault took place.

However, Timely Warnings may include detailed descriptions of the perpetrator even in cases where the person reporting the assault knows the assailant. 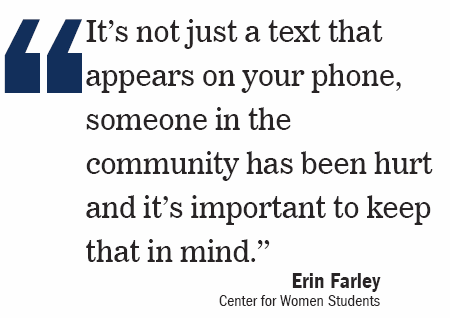 For the majority of sexual assaults, the individuals reporting the assault know their attackers and may feel uncomfortable identifying them, for various reasons including fear of reprisal or harassment.

Farley said victims of sexual assault are always concerned that Timely Warnings may inadvertently identify victims, even if they don’t wish to be.

“Some people are assaulted in a certain place and if the Timely Warning reports that place, they may be fearful that the perpetrator may know they reported it,” Farley said.

These fears are not unfounded either. Keith Robb, a detective at the State College Police Department, said publicly releasing information such as the name of a fraternity has actually harmed victims and investigations.

“I know in the past when fraternities were identified as a location for the sexual assault, the victim was harassed by her friends, by the fraternity, friends of the fraternity — and it cost us,” Robb said.

Timely Warnings do not disclose all crimes that are reported to or by the Penn State Police, either.

According to the 2016 edition of the Department of Education’s Handbook for Campus Safety and Security Reporting, a Timely Warning is only required if a reported crime is a Clery Act crime that occurred within the campus geography and presents an ongoing threat to the campus community.

Timely Warnings may also not be sent out if there is too little information reported, or if the suspect has already been apprehended.

Campus geography is not as self-explanatory as it may sound. It not only includes locations that are on campus or are owned and controlled by the university, but also some off-campus locations and public property connected to the campus.

Off-campus housing or residences where students live, such as an off-campus fraternity or an off-campus apartment complex, are included in campus geography as well.

Additionally, just because a location is a part of campus geography, does not mean that University Police have legal jurisdiction over it.

Some locations that are in Penn State’s university geography are in the State College Police Department’s jurisdiction.

Because sending out Timely Warnings is primarily a University Police responsibility, if the crime is not reported to the Penn State Police they cannot file a report and a Timely Warning won’t be sent out.

Stephanie Brooks of the Penn State University Police said one of the most common ways crimes are reported to the Penn State Police is through the university’s online reporting form, which allows the reporter to remain anonymous.

Despite that this may make those reporting the crime feel more secure, the anonymity makes it almost impossible for police to do follow-ups with the reporter and further investigate unless the individual filing the report comes forward.

A crime can also be reported directly to someone the Clery Act identifies as a campus security authority, which can be anyone from a coach to a residence assistant to a University Police Officer.

If a Clery crime is reported to a campus security authority, Clery policy requires a CSA to report the crime and the details of the crime to the university police.

However, CSAs are not legally required to report a Clery crime they hear about, and though they can be disciplined by the university, the Clery Act holds institutions accountable more often than individuals.

Bogus said, however, there are no known incidents of CSAs not reporting a Clery crime.

One pitfall of any method of reporting a crime is the individual filing the report may not be the one who experienced the assault themselves, and details that are not only necessary to a police investigation, but relevant of the crime such as the timeframe of the assault, the location, the identity of the victim, the identity or a description of the perpetrator, may not be known or disclosed by the reporter.

Farley said one of the most common frustrations with Timely Warnings she hears from students is not that there is a lack of details, but that sexual assaults keep happening and they don’t know what they can do to stop them.

She said many students said they wished the Timely Warnings mentioned more ways members of the community could get involved with prevention efforts.

Farley also said there is a concern that people may be desensitized to the Timely Warnings because of their frequency.

“In our educational programs it’s usually someone talking about concerns that their peers are being desensitized. Because of the frequency [of the] text messages, some people lose sight of someone’s story and experience,” Farley said. “Some people don’t understand that lives have been changed. It’s not just a text that appears on your phone, someone in the community has been hurt and it’s important to keep that in mind.”

Leif Greiss is a features reporter for The Daily Collegian. Follow him on Twitter at @Leif_Greiss or email him at lng@psu.edu.