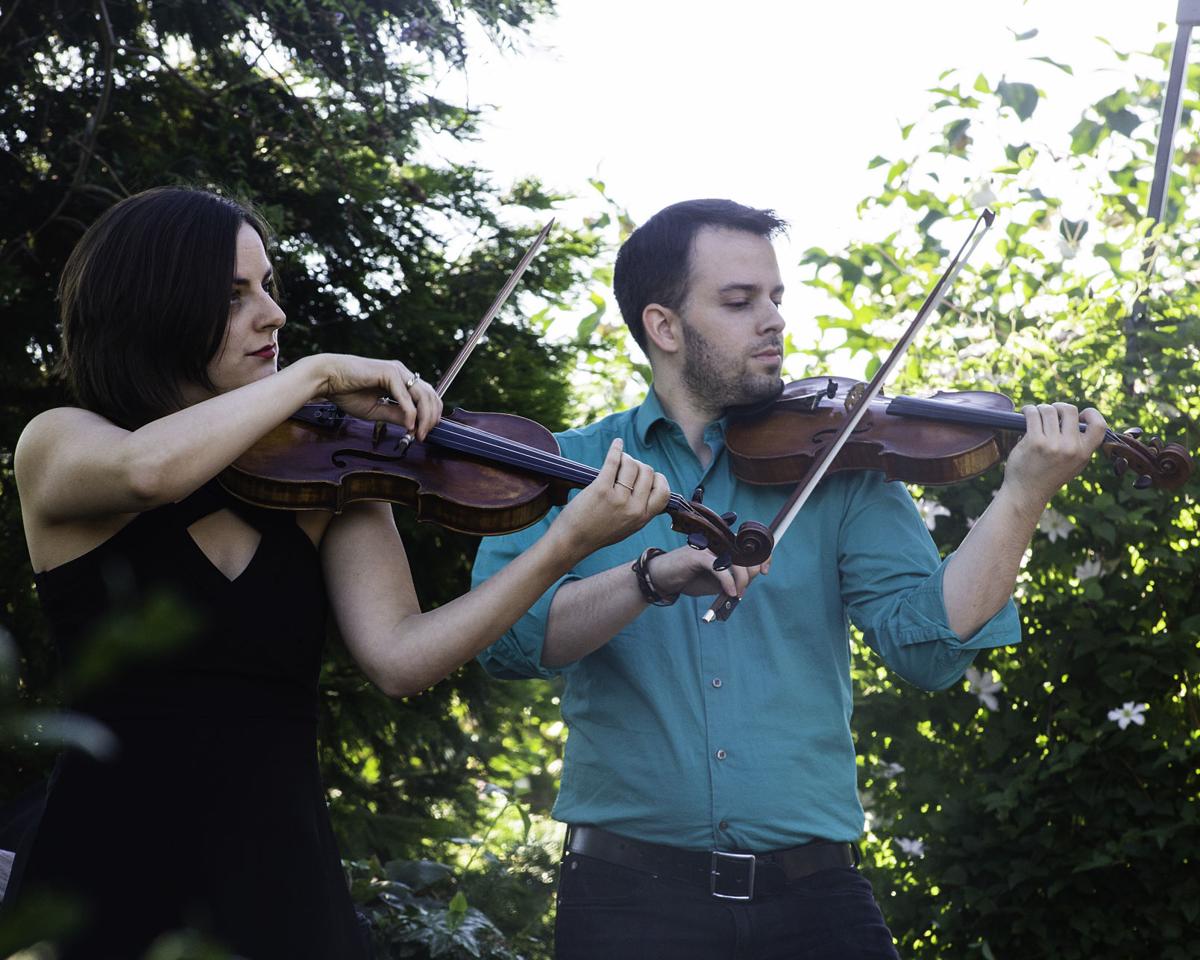 Revamped perform at the Arboretum at Penn State during the Penn’s Woods Music Festival on Tuesday, June 11, 2019. 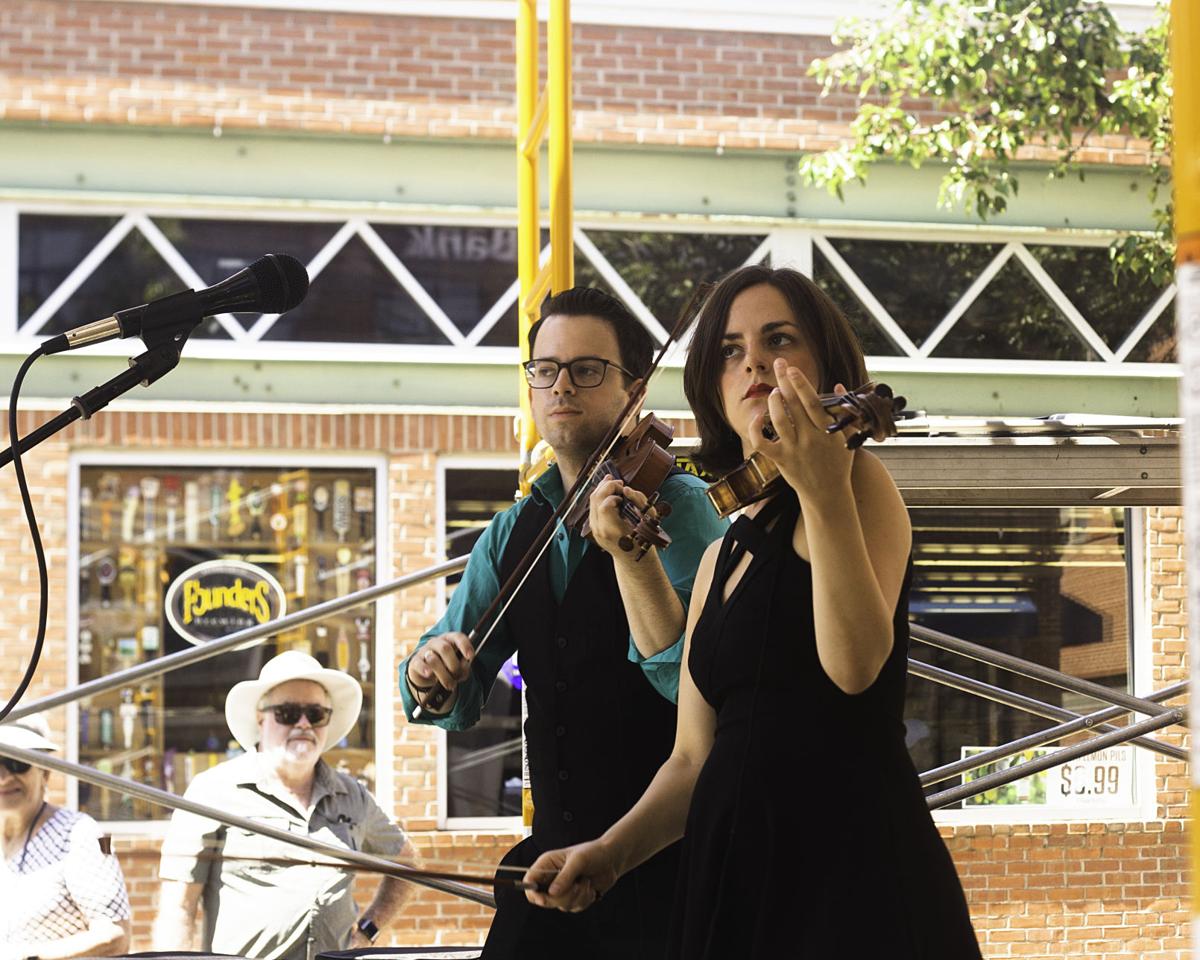 Playing the violin can be a challenge in itself for many individuals.

However, for a duo to play two different rhythms at the same time — with one person holding two violins, and the other holding two bows — takes it to another level.

For the husband-wife violin duo "Revamped," this trick is one of many accomplishments on their musical resumes.

Minnich and Williams Minnich began dating in college at Bowling Green State. However, they first met at an All-State Orchestra program in high school.

As Williams Minnich described it, many different instruments featured at the program were on sale or could be played, including a Stradivarius — one of several hundred rare 300-year-old violins created by Antonio Stradivari — valued at $2.5 million.

While the Stradivarius was not for sale, it could be played. Williams Minnich said she very carefully picked up the instrument, played it (describing the violin as “just glorious”) and carefully set it back down.

While looking at other violins, Williams Minnich heard someone else playing the Stradivarius.

“I heard someone playing the Tchaikovsky Violin Concerto really, really well… but also, they were playing extremely vigorously on this violin,” she said, laughing in recollection. “I was super impressed, and also shocked that person was not being at all delicate with this $2.5 million violin.”

She soon came to learn that person was Minnich.

When they began several years later, they also began playing the violin together. Minnich said they were looking for an excuse to hang out with each other, and practicing together was an “adequate reason.”

Playing together felt organic, and the two started learning tricks together. Among these included the trick where Williams Minnich threads two violins while Minnich plays with two bows — a difficult stunt that took several all-nighters to get the hang of.

Coordination, Minnich and Williams Minnich agreed, was the most difficult part of the trick to learn. They would often master the left side and right side separately before playing both sides together.

Even as they got the hang of the trick, they strived to perfect it so it both looked and sounded good. They sometimes perform the stunt during gigs and high-profile performances.

In July, the duo played at Arts Fest for the fourth year. Minnich and Williams Minnich's music isn't limited to Pennsylvania, however. They've played the violin across the globe, with one of their favorite locations being a medieval fortress in Greece.

Despite their global reach, the pair maintains strong ties with the Centre County community. Currently living in State College, Minnich and Williams Minnich perform together as Revamped and in local orchestras, symphonies and quartets. They also teach individual and group classes through the State College Suzuki Program to help Centre County students learn how to play the violin.

Nika Kello, who has been playing the violin for about nine years, is currently one of Minnich and Williams Minnich’s students.

“I’ve learned so much from both of them,” Kello, 15, said. “Technically, they’ve helped me grow in my personal musical technique and skill, and they’ve also introduced me to a wide variety of music — taking the violin beyond the regular classical standards and being able to realize what else you can do as a musician.”

Kello has attended numerous Revamped shows with her mother, Carolyn. Carolyn said the first time she saw Revamped perform, she was highly impressed with them as performers.

Years later, she continues to attend shows and said she has noticed growth in the duo’s audience. She “always gets a kick” out of seeing others watch Revamped for the first time, noting they often react in awe and delight.

As teachers, Carolyn described the duo as “fun, kind and sweet,” and said her daughter is “lucky” to learn from them.

“They find a way of both inspiring and propping the kids up in the best way,” Kello said.

Minnich and Williams Minnich started playing the violin at ages 9 and 4, respectively. Both had a natural knack for the violin — however, that didn’t mean there weren’t challenges along the way.

“[Playing the violin] definitely clicked for me, but inevitably there’s going to be challenges,” Williams Minnich said. “It would be like a here and there kind of thing where there would be something for whatever reason that was really, really hard or super frustrating. You practice a lot, get mad and cry, and go practice again.”

Editor’s note: In Out of Bounds, senior Collegian sports reporter Jack R. Hirsh will be taki…

String instruments can be tougher to play than others, as the musician must be able to make a “good sound” and play in tune, according to Minnich. Williams Minnich added there is no margin of error when playing the violin — the violinist could be a millimeter off and the song will be out of tune. The slightest shift of weight in the fingertip can make all the difference.

According to Williams Minnich, she’s never met a student who didn’t have struggles playing the instrument.

Williams Minnich said she decided she wanted to play the violin professionally at age 15, while Minnich described his decision as “more of a progression” as he continued to play as an undergraduate student.

Since college, Minnich and Williams Minnich have built their careers entirely out of music, considering themselves freelance musicians. They perform together as Revamped, perform as soloists in orchestras and symphonies, and perform in the State College-based Allegria String Quartet, of which Williams Minnich is the founding member.

As Revamped, they have also released two albums — “Broken Bridges” and “A Revamped Christmas.”

Both continue to teach students through the State College Suzuki Program, where Williams Minnich also serves as the director of the program.

In addition, Minnich is the president of the Penn’s Woods Music Festival in State College, a professional orchestral and chamber music festival held in the summer that began in 1986.

This past year, the duo’s focus shifted to parenting their 1-year-old son, Will.

Looking to the future, Minnich and Williams Minnich said they hope to make more recordings, grow their Patreon community and continue reaching out to youth in the local community.

“Moving forward, we’ll have to figure out how to grow ourselves and our ensemble,” Minnich said, “while maintaining a healthy family life.”