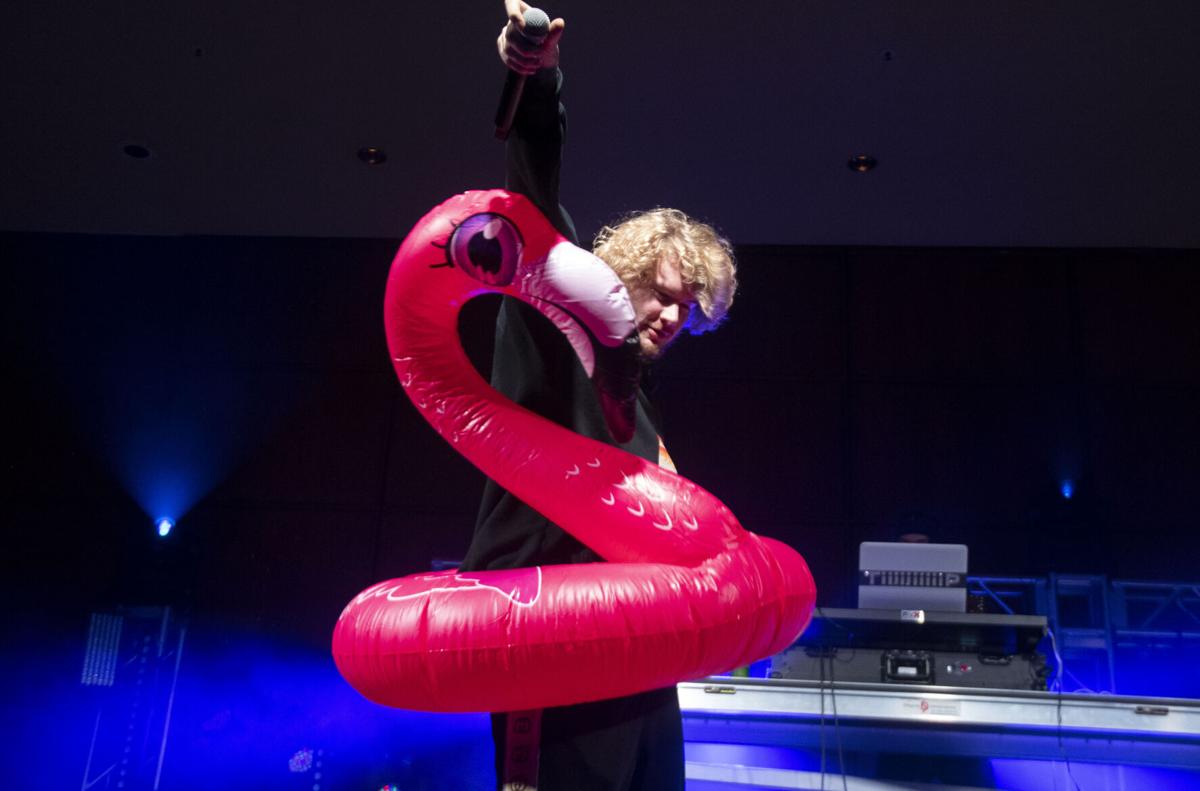 Rapper Yung Gravy performs in Alumni Hall in the HUB-Robeson Center during a free concert hosted by the Student Programming Association on Thursday, Dec. 2, 2021 in University Park, Pa. 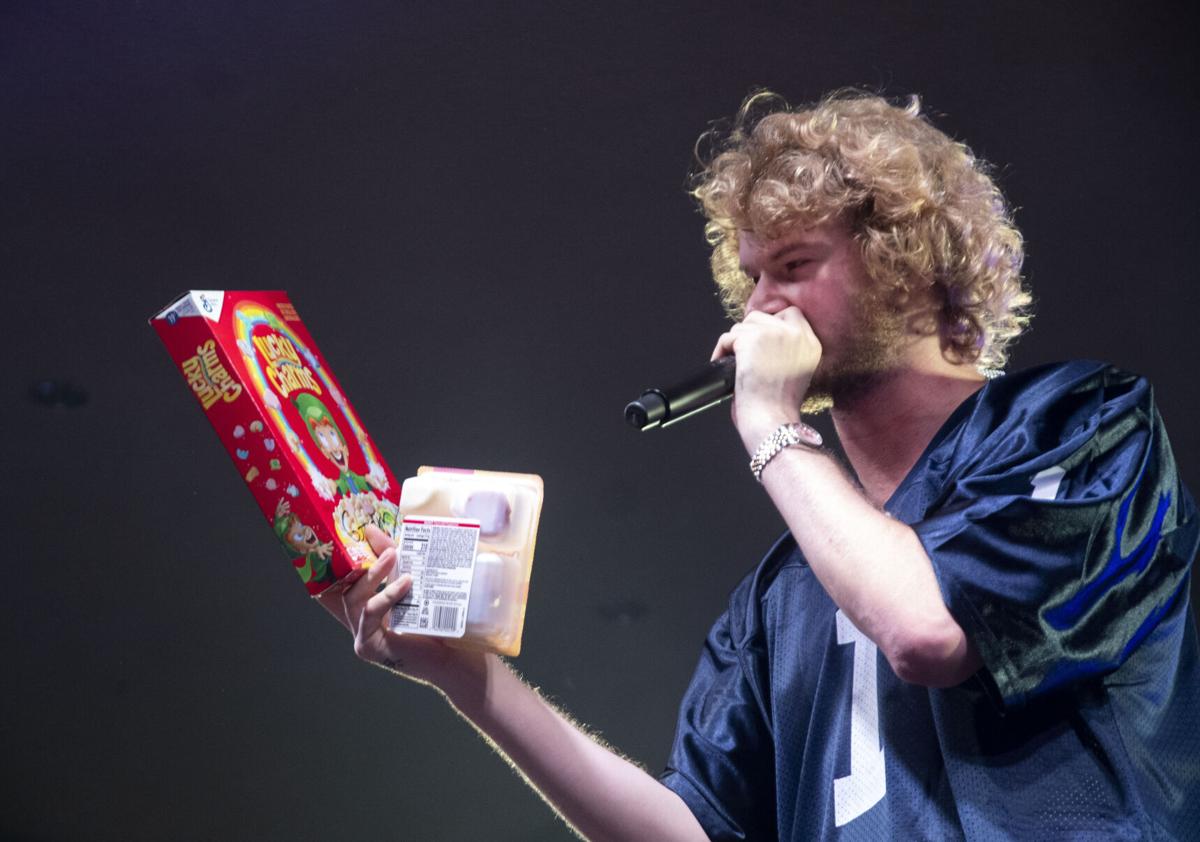 Rapper Yung Gravy throws out snacks to the audience while performing in Alumni Hall in the HUB-Robeson Center during a free concert hosted by the Student Programming Association on Thursday, Dec. 2, 2021 in University Park, Pa. 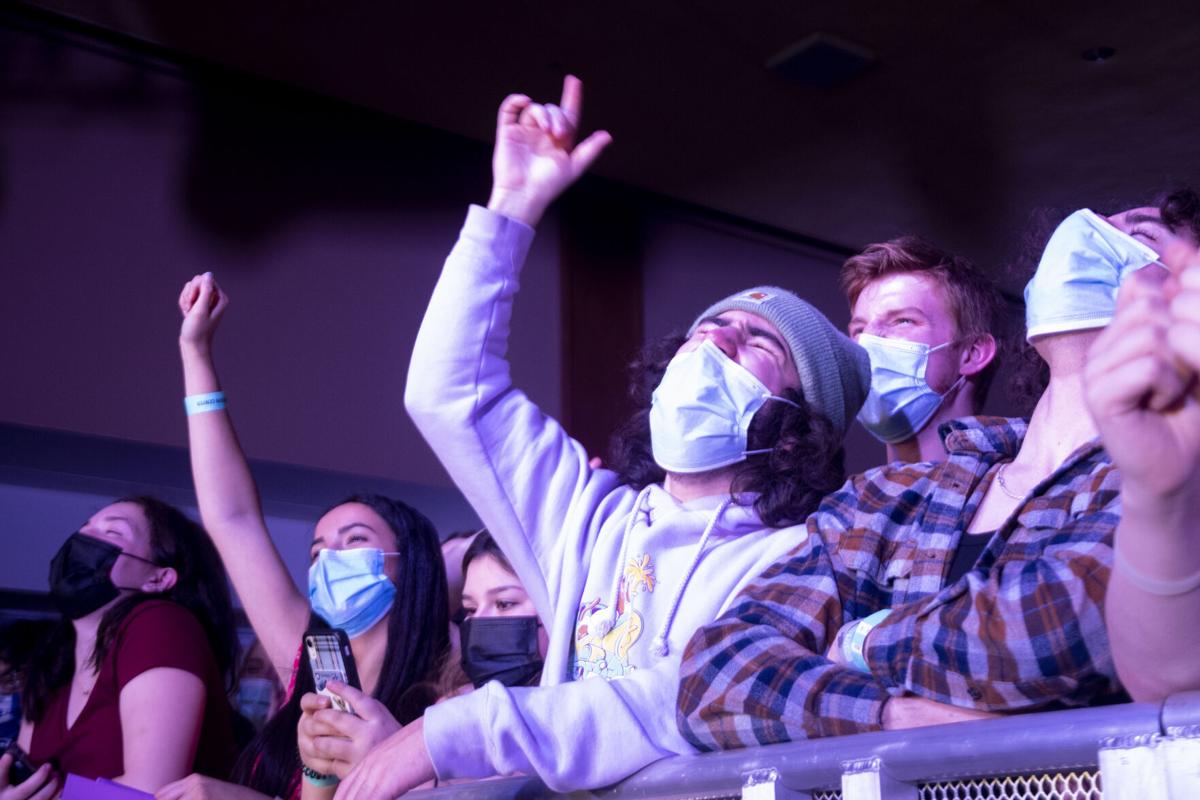 Fans raise their arms and sing along as rapper Yung Gravy performs in Alumni Hall in the HUB-Robeson Center during a free concert hosted by the Student Programming Association on Thursday, Dec. 2, 2021 in University Park, Pa.

When rapper Yung Gravy hit the stage while sporting a pink flamingo pool float on Thursday night in the HUB-Robeson Center’s Alumni Hall, the audience cheered as he took off his sweatshirt to reveal a Penn State jersey underneath.

After performing “Miami Ice,” Gravy tossed Lunchables and a box of Lucky Charms into the audience.

“I wish I could feed this directly to [everyone’s] mouths, and we could bond over it,” Gravy said.

Gravy sang “Mr. Clean” for his fourth song and distributed bottled water to the crowd as he discussed Penn State’s sports.

“I’ve got the most love for Penn State, but I did go to Wisconsin at one point,” Gravy said. “I ended up fighting this kid from Penn State when I was a sophomore in college… My only thought when I came to Penn State was that y’all throw good hands...Y'all get lit on Thursdays.”

Gravy began the “We Are” chant after performing “Welcome to Chilis” and expressed his approval of the crowd’s response.

When he finished singing “Magic,” Gravy said, “That was lit. We need some food.”

More Lunchables and another water bottle were tossed into the crowd.

Among the crowd, many fans held up signs for Gravy, both handwritten as well as messages on their phones. Gravy paused to read them.

“Many of these I cannot say aloud,” he said.

The show ended with “oops!” and Gravy thanked his fans for their support.

“Y’all are some champs. I love you,” Gravy said as he tossed his jersey into the audience.

“He is really good at performing,” McGarrey (junior-secondary English education) said. “He knows how to put on a show.”

Additionally, McGarrey said Gravy is one of her favorite artists, and she has listened to him since her junior year of high school.

Lindsey Sabo said she is not a “big” Gravy fan, but she still enjoyed the concert.

“I just liked being with my friends and watching someone that I kind of like,” Sabo (junior-environmental resource management and German) said. “I really liked ‘Mr. Clean.’”

Tyler Simms did not have tickets to the show, but he and his friends got in by waiting at the standby line several hours in advance.

"[The concert] was packed, but it was a lot more packed than I thought it was going to be,” Simms (freshman-division of undergraduate studies) said, "which is good.”

Simms said he has been a fan of Gravy since his debut studio album “Sensational" was released in 2019.

“[My friends and I] love Yung Gravy."

Live theatre is like an iceberg: What’s visible to the audience is only a small slice of the effort it takes to make the show happen.

Hanukkah began on Sunday, right as many Penn State students were returning to campus after Thanksgiving break. Due to the Jewish holiday landi…

Penn State announced Friday its indoor masking requirement will remain in effect into the spring semester — regardless of vaccination status.

With nearly an entire semester of designing, drawing, sculpting and crafting under their belts, Penn State’s visual arts students are preparin…

Ariana Krammes is a music reporter and general assignment photographer for The Daily Collegian. She is a senior majoring in print and digital journalism with a minor in English.