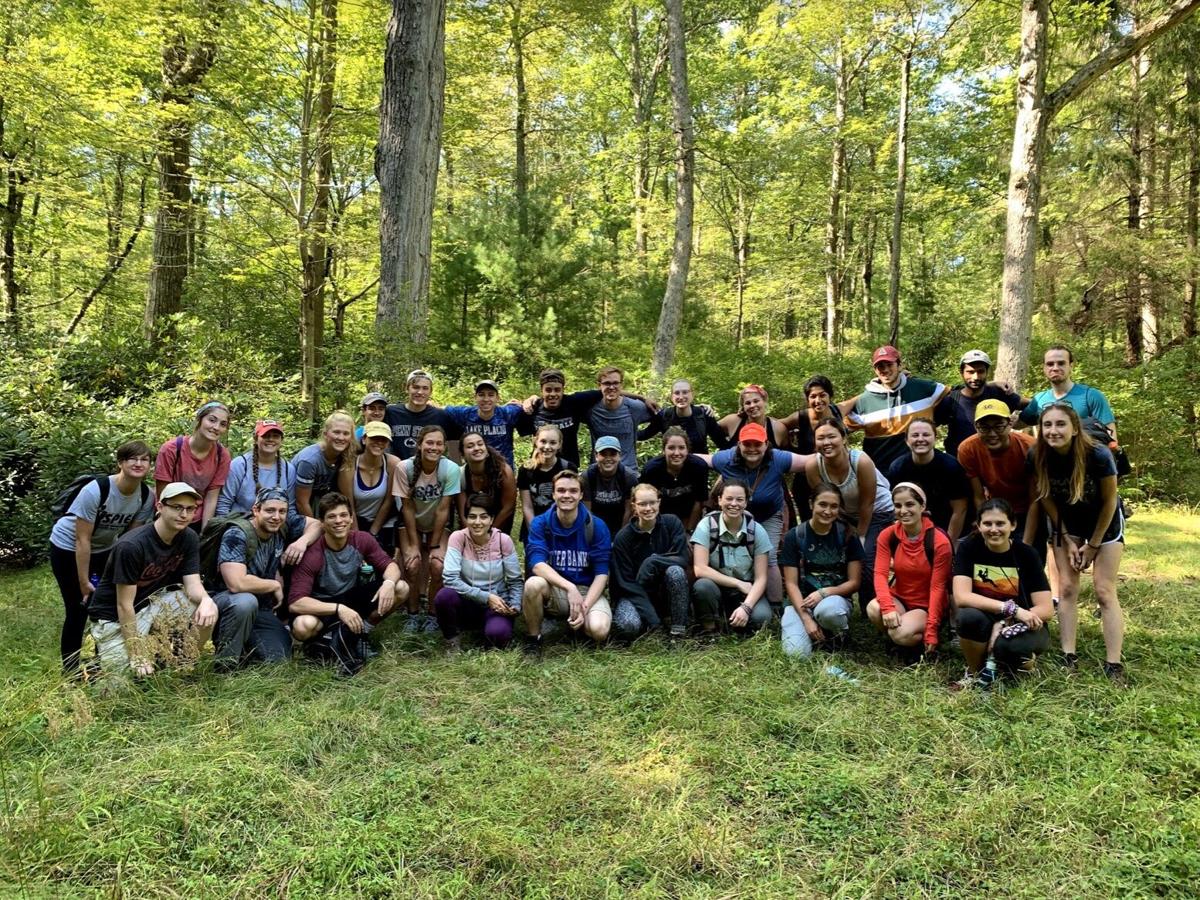 The 2019 Penn State Outing Club poses during a day hike. 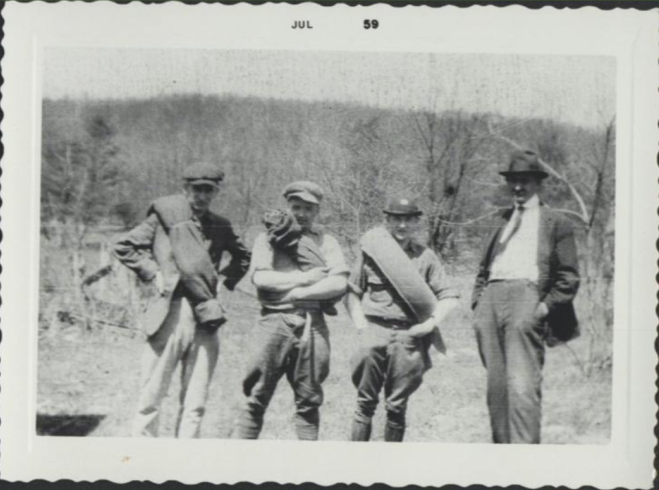 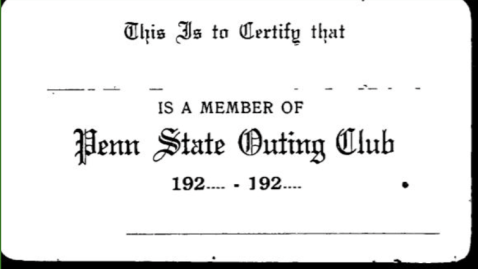 In the sixth section of their 1958 statement of purpose, club members wrote the final goal of their organization was “to further certain educational objectives of the university by promoting ethical, moral, spiritual and aesthetic principles upon which a satisfactory and rewarding philosophy of life may be developed.”

And for decades, the Penn State Outing Club has tried to fulfill its purpose while maintaining a vast membership of sometimes over 1,400 students.

Founded in 1920, the club steadily grew throughout the mid-20th century. By 1954, the club had three divisions: Cabin & Trail, Field & Stream and Wintersport, with more to be added in the coming years.

By the mid 1970s, the club reached its peak with nearly 1,500 members and 8 divisions with their own leadership all under the banner of PSOC.

Many of these groups ultimately separated but live on today. Nittany Grotto Caving Club, Penn State Ski Club, Ecoaction and others were born out of the once larger Penn State Outing Club. Currently, PSOC consists solely of its former hiking division.

In this era, the club became a trailblazer in central Pennsylvania, as it participated in local trail maintenance and carved out new paths. The Allegheny Front Trail, a 42-mile loop around Black Moshannon State Park, was mapped and blazed with help from PSOC, and many others were maintained with its aid.

Most famously, the club carved out and blazed orange the beginnings of what would ultimately become the 327-mile Mid State Trail, which runs from the border of Maryland to the border of New York. The project was masterminded by the club’s former advisor, Thomas Thwaites, a longtime Penn State physics professor who died in 2014.

“We definitely have touched the landscape around here,” Zach Blume, the club’s treasurer, said. “... We have a history here.”

Blume (senior-civil engineering) said he has been backpacking since eighth grade and joined PSOC his first semester on campus. He also has a family history within the organization — his aunt and uncle met as club members in the early ‘80s.

Reflecting on his project and its construction later, Thwaites wrote, “The Mid State Trail was created to foster these simple, natural, spiritual experiences, so that we may all enjoy a greater respect for nature and therefore protect nature for all future generations.”

PSOC stayed active and remained fairly consistent until 2018, when it faced an existential crisis.

A Penn State review found the club had “an unacceptable level of risk in their current operation model” and sought to dissolve the then 98-year-old club. The Nittany Grotto Caving Club and the Nittany Divers SCUBA Club faced the same dilemma.

“By the end of spring 2018, it was essentially like the gavel had dropped,” Blume said.

The decision caused immediate confusion and disappointment among the club and outdoor community and garnered international press attention. The story was picked up by the Pittsburgh Post-Gazette, Outside Magazine, the BBC and The DailyMail.

The club survived, though in a different form. It was classified as a “special interest” group and limited to day hikes within 50 miles of State College, Blume said.

In 2019, a working group was formed of PSOC executives, Penn State’s Risk Management Office, Penn State Student Affairs, faculty from Penn State’s Recreation, Park and Tourism Management department, and others to discuss the future of the club, according to Blume.

Though he was not a member of the working group, PSOC’s former Vice President and Webmaster, Ritvik Prabhu, said there was little hostility or resentment among the participants, and discussions proceeded in good faith with divisions quickly falling apart.

This time also saw an unexpected rise in membership and diversities of experience within the club, Prabhu said. Where some students may have been intimidated by the club’s pre-2018 long backpacking trips and other treks, Prabhu said he believed the limited day hikes brought in more casual hikers and some beginners.

Eventually, the group constructed a proposal for the future of PSOC. In it, the club proposed the use of the “Common Adventure Model,” a group-centered adventure technique used by other college outing clubs that focuses on democratic decision-making and shared group responsibility, Outings Chair Mike Marakovits said.

The proposal also said PSOC must have wilderness first aid and wilderness first responders on outings, and group members must have some basic training in outdoor techniques prior to events. But it also lifted restrictions on overnight and distant outings, which Marakovits (junior-engineering science) said would allow the club to resume many of its previous activities.

After some deliberation and a pandemic in between, Penn State Vice President Damon Sims signed the working group’s proposal in spring 2021.

Forced to celebrate its centennial via Zoom, the now 101-year-old club will host a “Curriculum Fair” in early October to train its members in outdoor safety and the Common Adventure Model prior to its first overnight trip sometime later in the semester, Marakovits said.

“Our plan is to get a backpacking trip out and couple day hikes along the way and just adapt as necessary,” he said.

Prabhu said he thinks a new base of hikers may have emerged during the pandemic as the wilderness became one of the few areas unrestricted by the rapidly evolving situation. Expressing similar sentiments, Marakovits said hiking “helped him cope” with the pandemic.

“Nature was pretty unaffected by [the pandemic],” Marakovits said. “It felt like I was reconnecting with my roots in a way.”

Between now and the curriculum fair, the club will primarily act, Marakovits said, as it has in recent years with general meetings hosted on campus and members participating in independent outings among themselves.

Of hiking, Thwaites also wrote, “Foot travel over a remote primitive trail brings an exhilaration, an aliveness that cleanses us of our worldly woes and restores our spirit.”

And for the Penn State Outing Club, this semester may finally offer that again.

It’s time for Penn State students to get their lion ears out: Home football games are back i…

Review | Is the reign of Starbucks’ Pumpkin Spice Latte finally over?

Anyone who has ever heard of Starbucks knows of the iconic Pumpkin Spice Latte and the chokehold it has on society during the chilly fall months.

James Engel is a news reporter for The Daily Collegian. He is a sophomore majoring in digital and print journalism and classics and ancient Mediterranean studies.