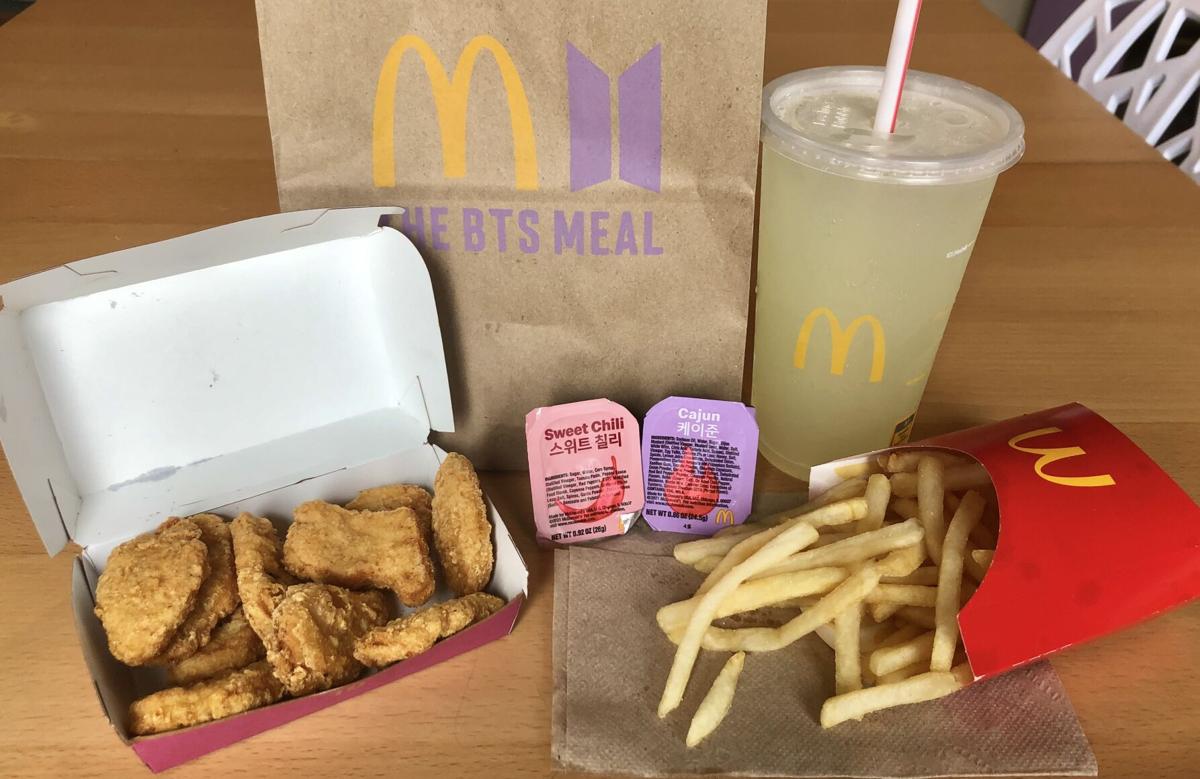 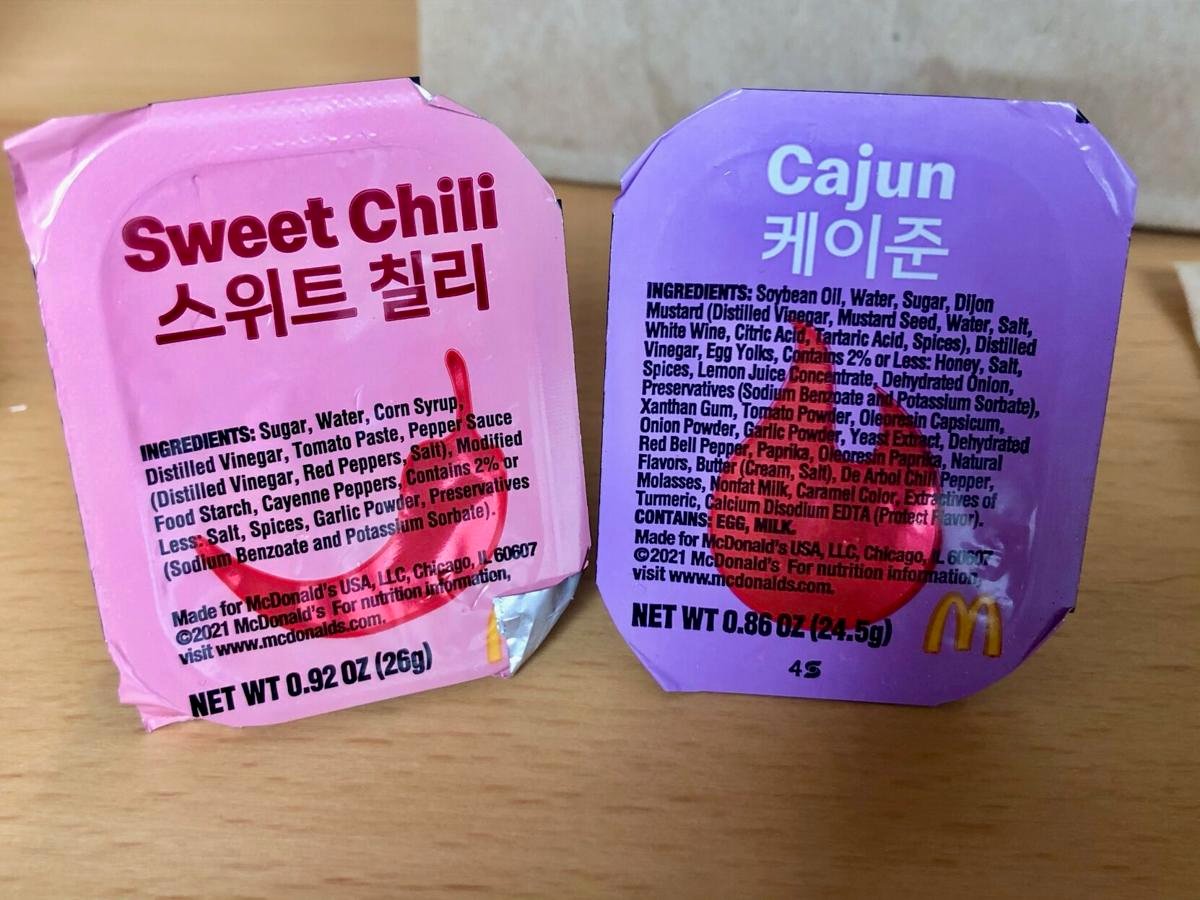 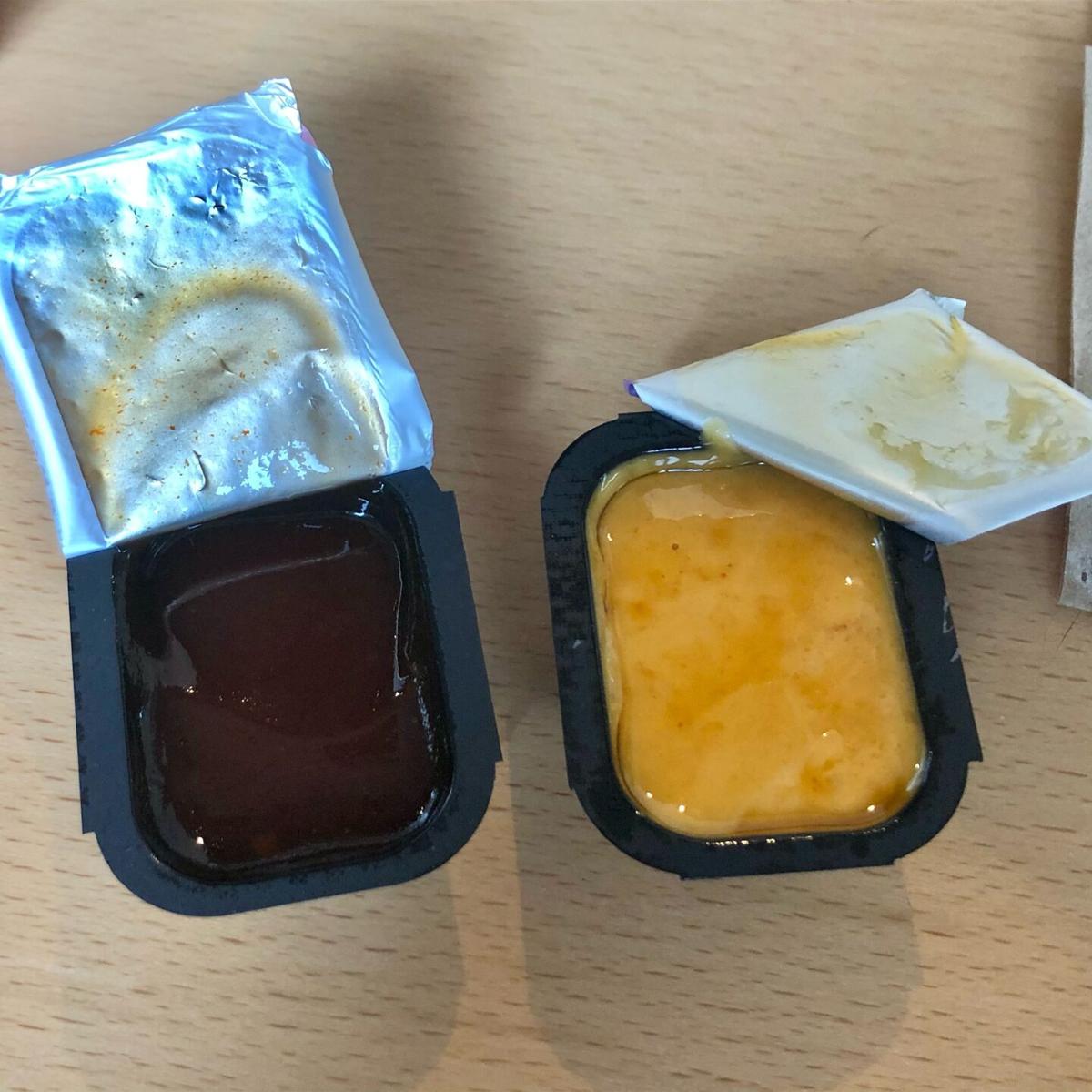 Fun fact: I ate my first chicken nugget when I was 16 years old. I’ve come a long way since then, and now at the age of 20, I consider myself to be something of a nugget connoisseur. Now is my greatest nugget challenge yet: reviewing McDonald’s new BTS meal.

After the mortifying ordeal of entering a McDonald’s alone to order the BTS meal from a cashier who didn’t seem to know what the BTS meal even was, I went home and inspected the packaging.

My order came in a cute bag with the McDonald’s logo and a purple BTS logo next to each other. Other than that, the rest of the packaging looked like anything else you would get at McDonald’s. This was disappointing, considering all the fun purple packaging I had seen on social media over the last couple weeks.

As far as the food goes, it was standard McDonald’s fare: a 10-piece McNuggets with medium fries and a drink.

My first impression upon looking at the food laid out in front of me: laziness.

It’s clear to see there was a lack of creativity involved in the development of the BTS meal, but this is not the first time it’s happened. As of late, McDonald’s seems fond of collaborating with musicians for limited-time special meals but often fails to deliver on truly making these offerings something memorable or special.

Take 2020’s Travis Scott meal for instance. McDonald’s could have created a unique barbecue or Southwest-inspired hamburger to pay homage to the rapper’s Texan heritage, but instead it simply added bacon to a quarter pounder and served some preexisting barbecue sauce on the side.

Likewise for this meal, there are a number of things McDonald’s could have done to add some BTS flair. What the fast food chain really should have done is give these chicken nuggets a brand-new, Korean-inspired flavor. A K-BBQ spiced nugget would have been the perfect way to acknowledge the band’s Korean heritage and offer new flavors that even more people would flock to try out.

If McDonald’s didn’t want to put in that amount of effort, it could have easily included seven nuggets to represent the seven band members instead of opting for the standard 10-piece.

Still, despite its flaws and my nitpicks, the BTS meal was not a complete disaster. In fact, there were a couple things I loved about it, namely the two new dipping sauces.

With pastel pink and purple packages and adorable graphics, the sweet chili and cajun sauces were the spicy stars of the BTS meal.

The sweet chili sauce was tangy and peppery, with a little sweetness to counteract the heat. If you’re at all familiar with gochujang, the spicy Korean condiment that goes with pretty much everything, it’s easy to see the Korean influence in this sauce. It’s safe to say I was a fan.

Despite having a drawing of a fire on the package, the cajun sauce turned out to be a little milder than its counterpart. That being said, I did prefer its well-rounded hot mustard taste to the sweet chili sauce.

I’m really hoping McDonald’s decides to keep both sauces on its permanent menu. Sadly, I imagine that’s unlikely considering these adventurous, bold sauces are unlikely to appeal to the average American palate.

Bottom line: Had McDonald’s spent a little less money on marketing and a little more on developing fun, inspired flavors, the BTS meal would have stood out more than the other options at McDonald’s.

If you’re looking for my recommendation, I say forgo the BTS meal and just get a regular order of nuggets or fries, but ask for the sweet chili and cajun sauces on the side. I think you’ll be pleasantly surprised.

Summer reading doesn’t have to be a chore — not when you can find the right book. Here are some of my favorites available at Penn State Univer…