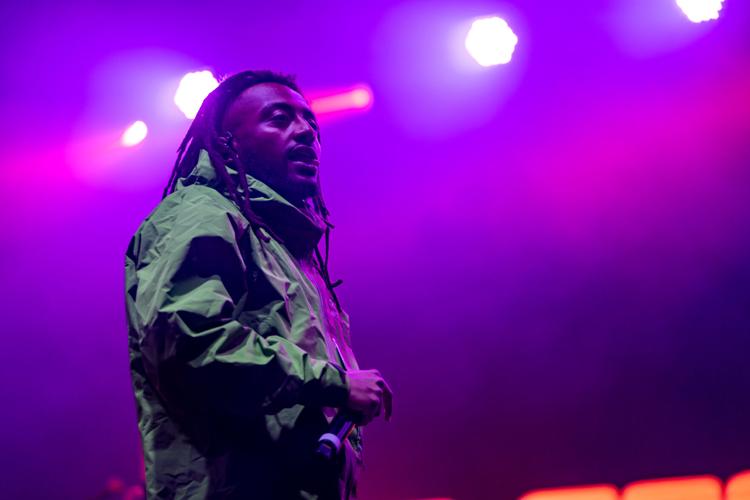 Aminé performs in front of the crowd during Movin’ On at the Intramural Fields in University Park, Pa. on Friday, Apr. 29, 2022. Movin’ On is a student-run music festival held annually at Penn State. 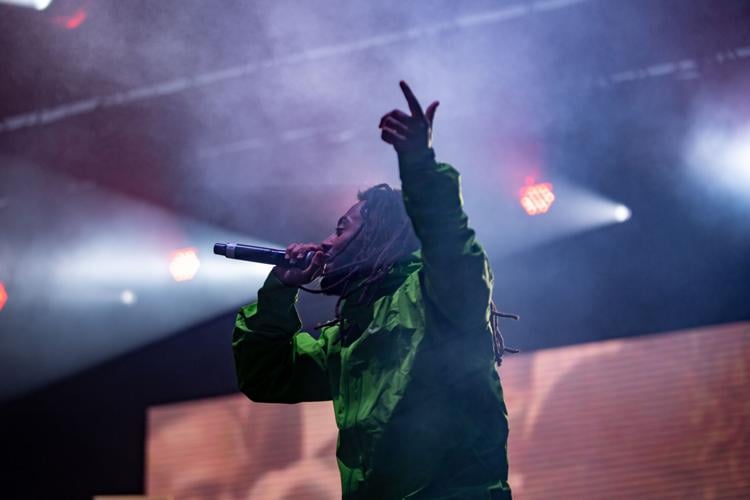 Aminé performs in front of the crowd during Movin’ On at the Intramural Fields in University Park, Pa. on Friday, Apr. 29, 2022. Movin’ On is a student-run music festival held annually at Penn State.

Aminé is known for his singles “Caroline” and “Spice Girl,” and he has released three albums since his 2017 debut “Good for You.”

Alex Weinstock said he listened to Aminé before the concert and enjoys his popular songs.

“My favorite [song] might be ‘RATCHET SATURN GIRL’ or maybe ‘Caroline,’ cause it’s a classic,” Weinstock (freshman-division of undergraduate studies) said.

Before Aminé came on, the stage was lit with strobes and smoke. The ground shook with pulsating bass, and a crowd of hundreds grooved to a mix of rap hits from the last 15 years.

A line for the funnel cake stretched back nearly half the length of the field, and students talked to each other between chanting the occasional lyric or two.

The DJ called for the audience to put their phone lights in the air, and without much fanfare, Aminé bounced onto the stage, wearing a bright green hoodie.

“Penn State what the f— is up?” Amine asked.

After an opening song, Aminé welcomed the audience to the show.

Behind him, a massive screen joined the strobe lights in spilling colors onto the stage and audience. Occasionally, the screen flashed patterns and Aminé’s name in stylized lettering.

Throughout the show, Aminé called on the audience to respond to him every time he said “You’re beautiful” with “I know.”

As the performance continued, more students joined the crowd gathered around the stage. The perimeter of the crowd grew more with each song.

Some students felt the effect of the gathering more than others.

“I got crushed in the pit,” Emma Donmoyer said.

“I had to crawl through people. It was terrible,” Donmoyer (freshman-biochemistry) continued. “We were all the way in the front. You could feel the different temperatures as you walked through; it got cold really fast.”

With each song, the sun set lower, and the field lights turned on across the field.

“Make some noise if you're getting bad grades,” Aminé said to roaring cheers toward the end of the show.

Aminé called for all of the lights to be turned off and for students to turn their lights on for his performance of “Caroline” near the end of the show.

Kamryn Jameson said she enjoyed the show despite the crowds.

“The crowd was a little bit hectic, but that’s to be expected at events like these,” Jameson (senior-rehabilitation and human services) said. “Other than that, the vibes were good, and he played a good show.”

Jameson was joined by Adam Guenard, who also liked being out with his friends.

“The vibes are high. We’re enjoying it,” Guenard (sophomore-international politics) said. “[It’s] just nice to be out here with my friends and enjoying the show.”

Fitz and The Tantrums brings funk vibes to Movin’ On 2022

Jack Harlow headlined Penn State’s Movin’ On festival, which is held every year to close out the spring semester.