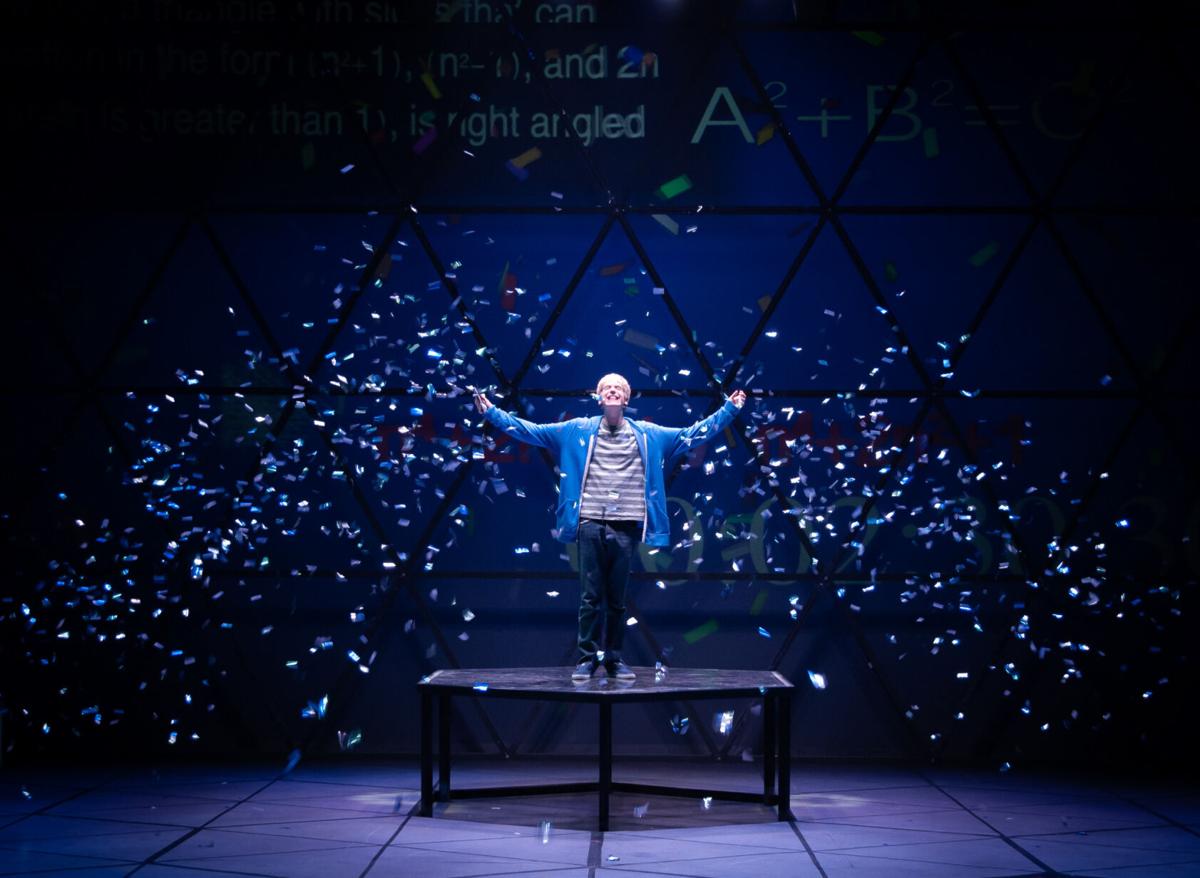 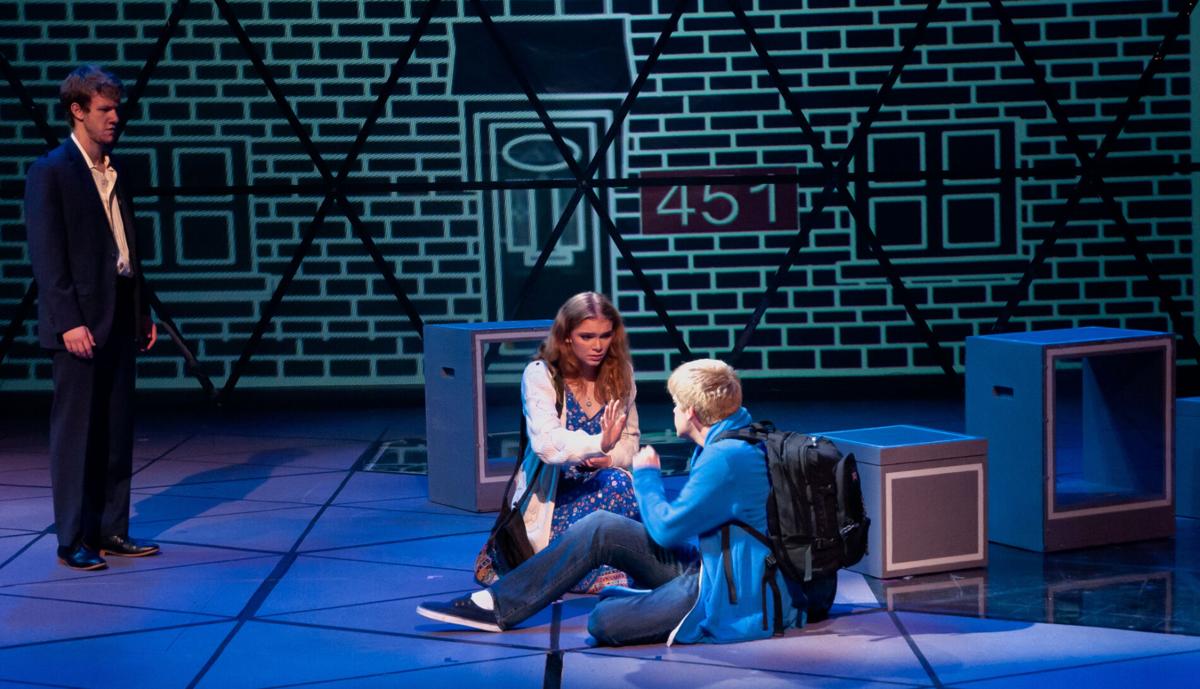 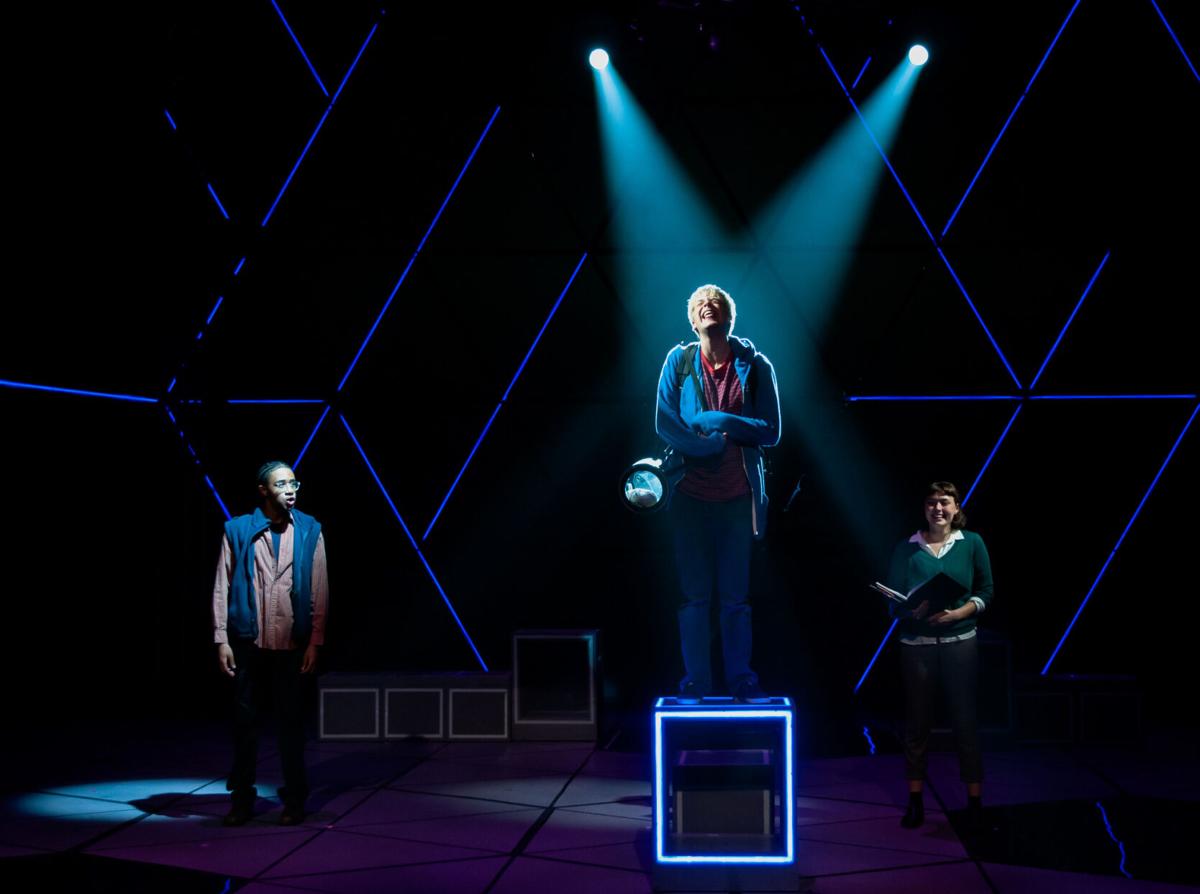 A dead dog lies silently on the stage, with a pitch fork jammed through its rib cage. The lights go down and soon return as the cast begins to parade onto the stage.

Surrounded by the ensemble, the dog brings together every actor in the show and presents the audience with a chance to meet some of the characters they will portray, each of which are brimming with differing emotional reactions to the grisly sight before them.

While the dog may have been nothing more than a fake prop, the emotional portrayals behind each character were alive and real within the almost packed theater.

Currently running until Oct. 9 at the Playhouse Theatre, “The Curious Incident of the Dog in the Night-Time” marks the kickoff performance to Penn State Centre Stage’s fall 2021 season. The play opened Oct. 1 and will see six more performances before it closes.

The play centers around the story of 15-year-old Christopher Boone and the death of his neighbor’s dog, Wellington. When Boone is wrongly accused of killing Wellington, he begins a detective mission to find the true culprit.

Along the way, Boone discovers the truth behind both Wellington’s death and the death of his own mother. His journey soon takes him beyond the realm of Wiltshire, the British city in which Boone resides.

By the end of the play, while the imposing questions of the first act are curiously resolved, an entire journey is laid before the audience, giving them the opportunity to imagine what Boone’s life will be like beyond the timeframe of the play.

Through the unique usage of lighting, set design and projections, the play presents itself through a minimalistic tone that explodes with vibrant sounds and loud colors. The world of Boone comes to life throughout the play as the audience is continuously transported into the inner mechanisms of his mind.

As a self-proclaimed theatre enthusiast, Hannah Kadrie said she was thrilled to see the way the set was designed and moved throughout the show.

“Whoever designed the set was really smart about it,” Kadrie (sophomore-architecture) said. “To be able to do all the set changes within the performance — I love when plays do that, just incorporate it all into one and not exactly have scene changes.”

Kadrie said she also believed the actors, who were tasked with donning accents, played their roles phenomenally. She said after watching the big fallout of Act 1, she was excited to see the coming resolutions and how the play’s characters and set would evolve.

Impressed with the set design as well, Adrianna Kapust said she believed the way the settings within the play were presented through the use of various sized boxes and projections was well thought out.

“I really liked the set design… I thought it was very impressive,” Kapust (sophomore-human development and family studies) said. “I liked the way it was 'spacey' because that’s a theme in the play.”

During various points in the play, Boone assembles a miniature train set, and as part of the Act 1 finale, a toy train is set on the tracks and begins to ride across the front of the stage. Kapust said this detail was a moment she particularly enjoyed as it set the stage for the next act.

Discovering the performance through an email, Kapust said the play ended up being a welcome return for her to live theatre.

Having auditioned for the play during his freshman year, Dylan Henderson said he enjoyed seeing the play come together through an audience perspective. Henderson (sophomore-acting) said he enjoyed the play and thought it was a good production.

While she had witnessed a previous performance of the student-written play “Headspace” earlier this semester, Jasmine Ward said this was one of her first times witnessing live theatre since the beginning of the coronavirus pandemic.

Ward (freshman-acting) said seeing this performance was her first time attending a Centre Stage production. She said she enjoyed the various aspects of the play and the way the company was able to bring Boone’s story to life.

“I really enjoyed the play... I honestly didn’t know anything about it going into it,” Ward said. “I really liked how they portrayed all the characters, even the accents, you could tell it was really worked on.”

Being able to witness live theatre once again, Ward said connecting with other people during a live, in-person performance is a unique experience that can’t be replicated via virtual options. Ward said it’s important that theaters have been able to find ways to accommodate audiences, even as the pandemic has caused various changes and mandates to most in-person events.

As a “townie,” Kyra Muramoto said she has seen various Centre Stage productions in the past. With the pandemic shutting down much of the live theatre Penn State and the State College community once had, Muramoto (freshman-acting) said before the performance of “The Curious Incident of the Dog in the Night-Time,” she had only been able to see virtual performances.

Having peers that performed in the show, Muramoto said she had seen pictures of the production before but was thrilled to actually see how the actions depicted in the photos came to life during the performance. She said being together to witness a play with fellow theatergoers was something she had not been able to partake in since pre-pandemic times.

“I think this is my first in-person theatre I’ve seen in a long time,” Muramoto said. “The fact that so many bodies are together in one room, and we all get to witness the same thing, but we each come away having these different experiences and taking in different meanings —shared experience is a really lovely thing, especially if we are all together while doing it. There is an aspect of connection that I haven’t been able to feel in a long time.”

Walking through downtown and campus, there’s always a surprise around the corner — whether it be a familiar face or the occasional musician.