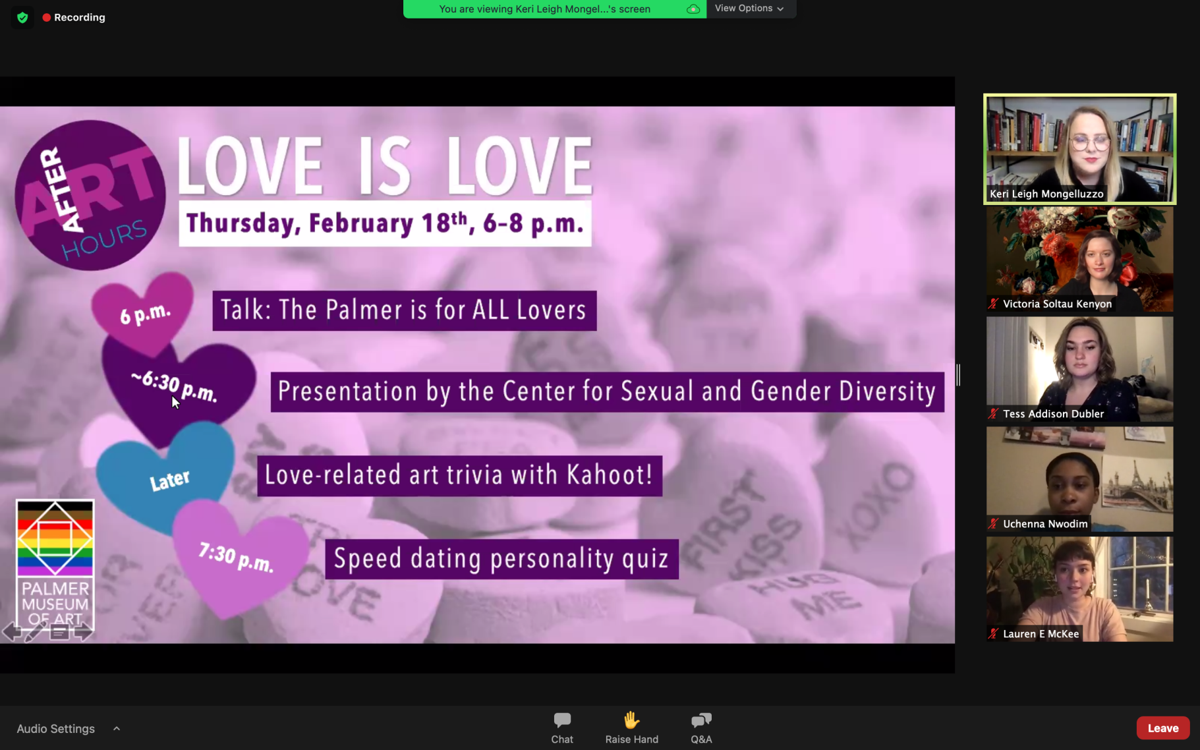 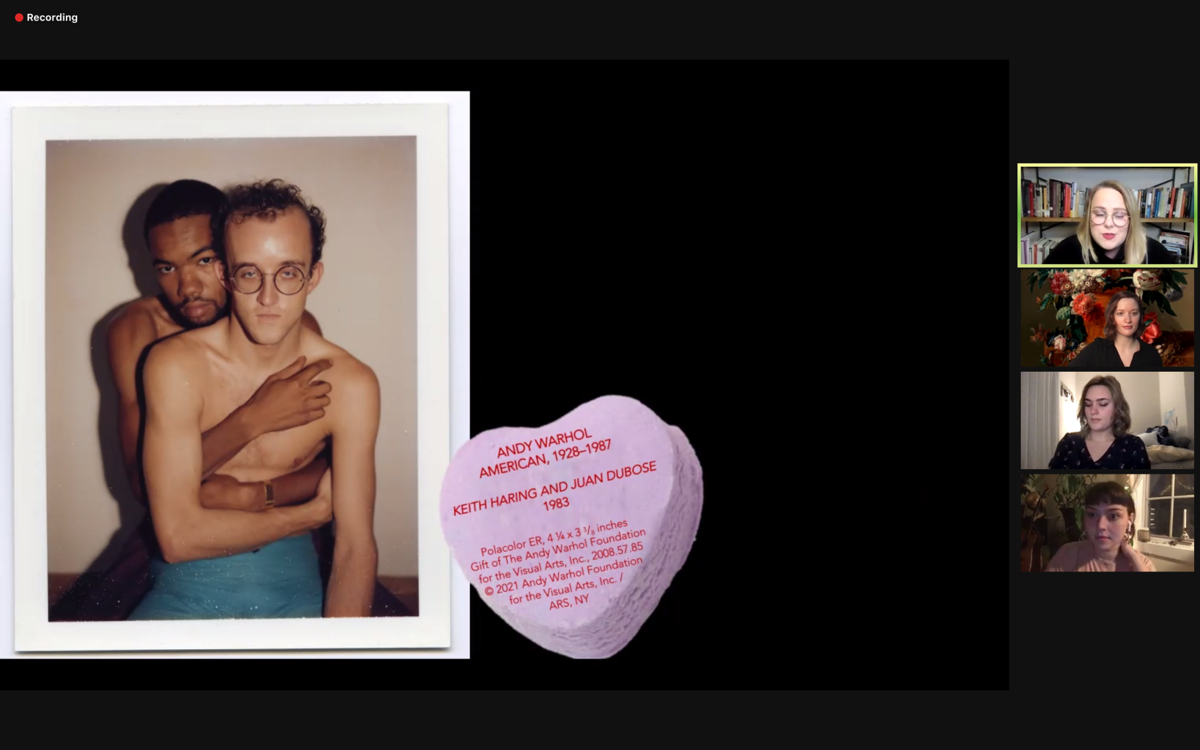 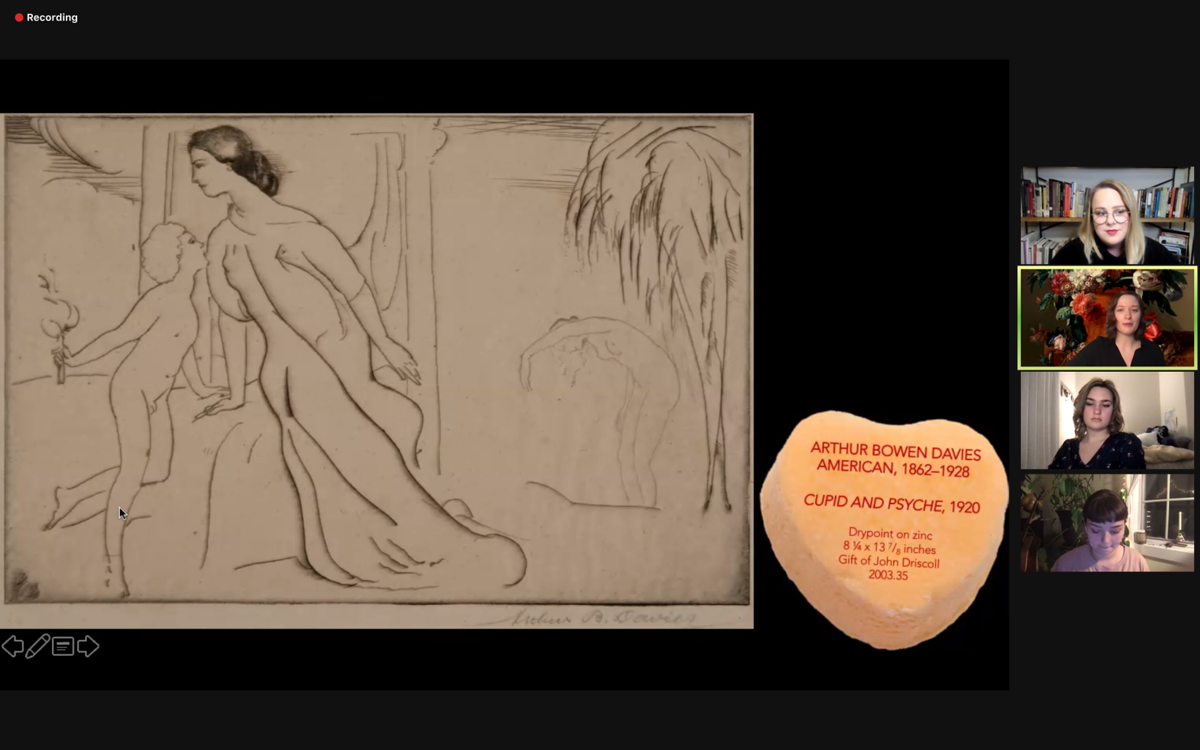 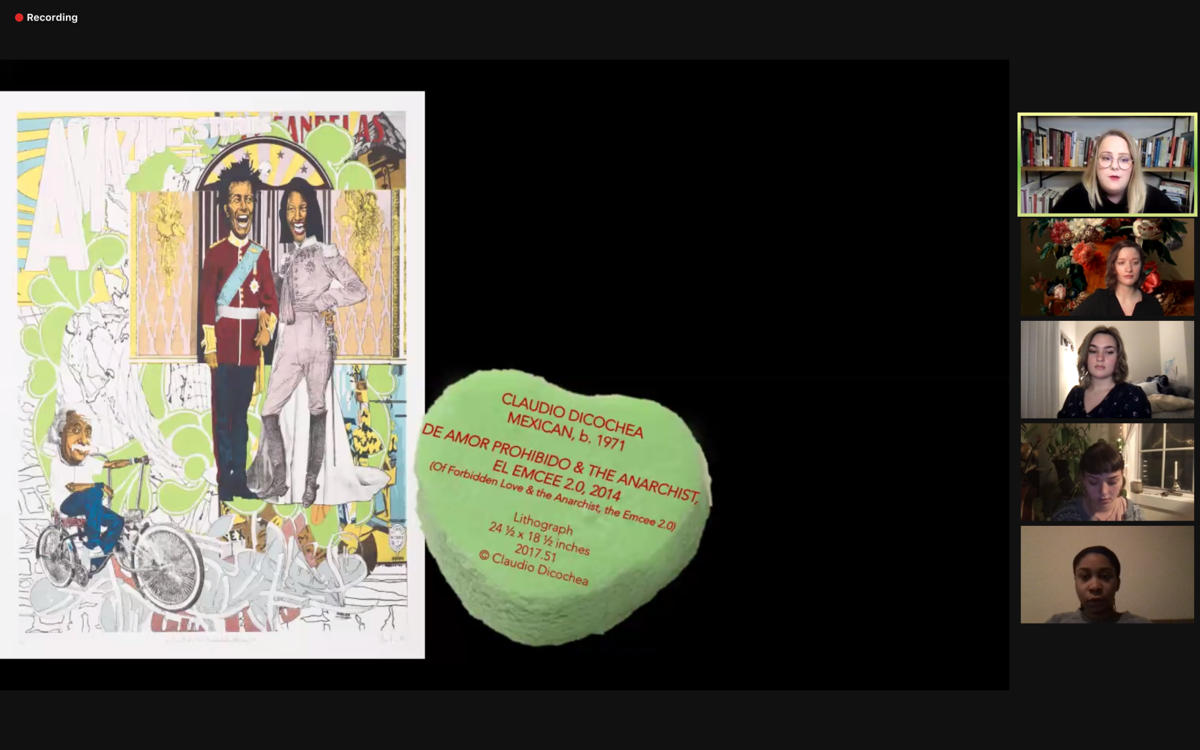 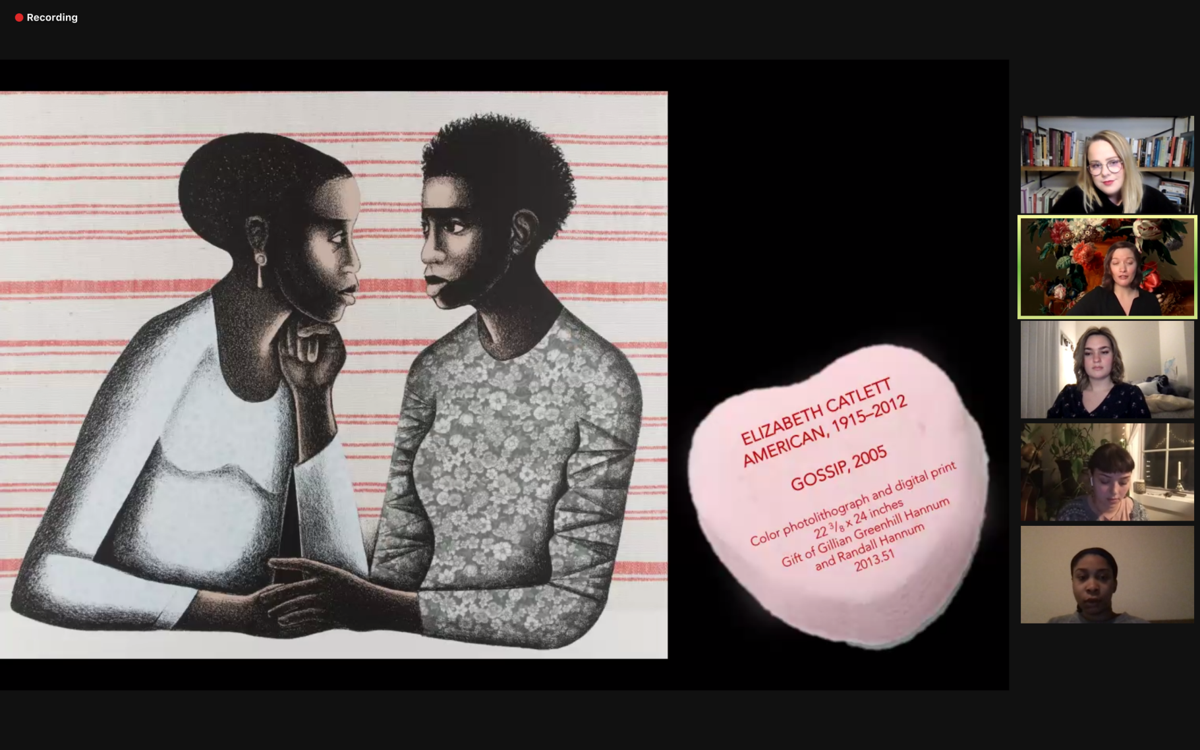 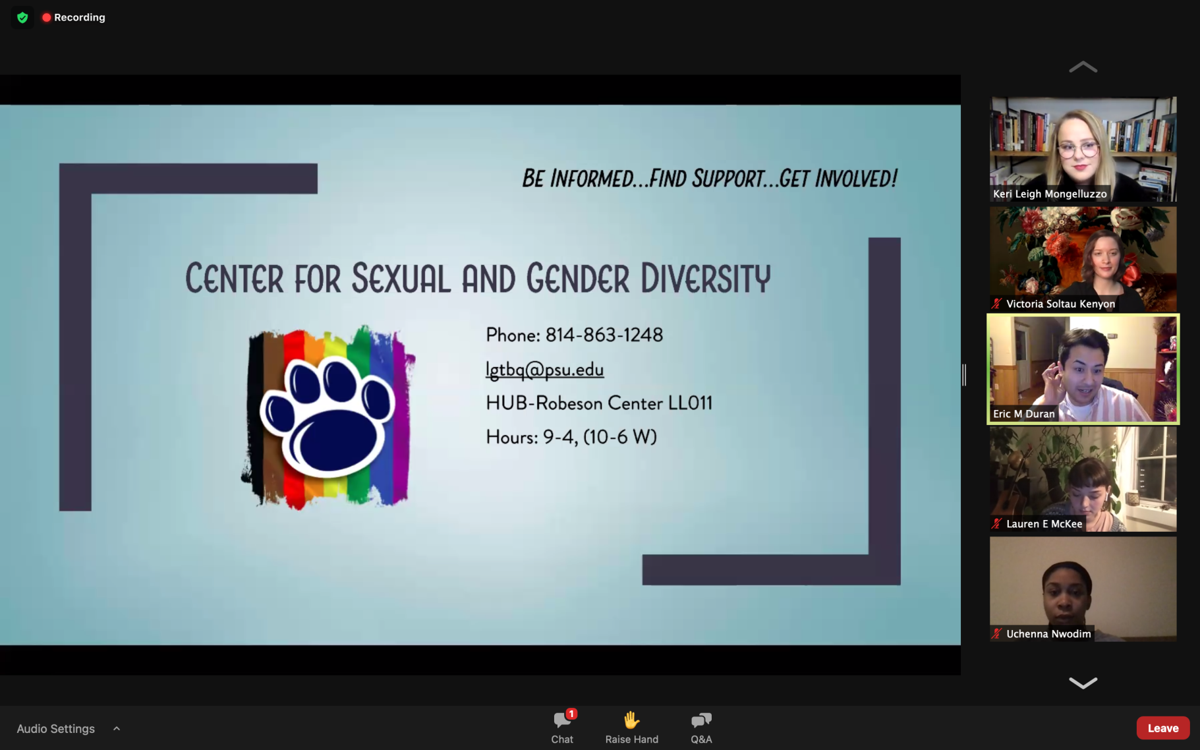 Even though Valentine’s Day is over, love is still in the air at the Palmer Museum of Art.

The museum staff hosted “Art After Hours: Love is Love” via Zoom Thursday night to explore the different representations of love in the Palmer’s permanent art collection.

According to Mongelluzzo (graduate-art history), the design of the alternating colors in a series of inset hearts is Duchamp’s way of “speaking to the universal quality of love, that it's not just limited to any singular form or expression.”

Mongelluzzo then introduced the first form of love represented in the collection: romantic love.

“We have this really kind of intimate photograph of the two embracing,” Mongelluzzo said. “They're a tangle of arms, [and] they create these really nice geometric shapes. The composition between Keith Haring's shoulders and his right arm as it's bent almost at a 90 degree angle forms almost a perfect square.”

Another graduate assistant, Victoria Kenyon, delved into the representation of love in myth and literature.

Kenyon (graduate-art history) said even though the pieces are from different time periods and societies, “the overarching themes of love, desire and loss represent experiences that are shared across cultural boundaries.”

According to Kenyon, “the piece depicts a scene from the tale in which Cupid, the Roman god of love, becomes enamored with a mortal woman named Psyche against the wishes of his mother, Venus, the goddess of love.”

Kenyon emphasized Davies’ use of lines and his lack of color, which make his portrayal of the scene different from the sculptures and paintings of classical myths.

Mongelluzzo then introduced the next theme of forbidden and star-crossed love with Claudio Dicochea’s piece called “De Amor Prohibido & The Anarchist.”

According to Mongelluzzo, Dicochea’s references to pop culture icons subverts an 18th century genre of painting that identified interracial relationships in colonial society, which were thought of as taboo at the time.

In Dicochea’s work, Mongelluzzo pointed out the references to Albert Einstein and the singer Selena.

The women’s body language in the piece suggests to Kenyon that there is a sense of “relationship and familiarity” between them, showcasing “a level of closeness and trust.”

“One of the reasons why Catlett depicted African American women in her art was because of her commitment to justice and advocating for the dignity and worth of African American women,” Kenyon said. “This piece presents a moment of camaraderie and companionship between these two figures, which is enhanced by countless inclusion of the Black Power fist in the center.”

The two graduate assistants then talked about familial love and puppy love represented through art to wrap up the gallery talk.

After the talk, they invited Eric Duran, the program coordinator for the Center for Sexual and Gender Diversity at Penn State, to talk about the center.

Duran talked about the various events and programs the center provides to students throughout the year.

According to Duran, the center will celebrate Pride Month in April when students will still be on campus.

“We have a peer education program where we do various allied workshops and student voice panels,” Duran said, “if you're an undergraduate student wanting to learn more about being an ally to the LGBTQ+ community.”

After Duran gave his presentation, Tess Dubler, an undergraduate intern at the Palmer, led a love-related art Kahoot trivia.

The participants answered questions ranging from famous lines in romantic movies to material they had gone over during the gallery talk.

After the game, the staff held a speed dating activity involving pieces of art and a personality quiz to wrap up the virtual event.

Mongelluzzo said many of the pieces of art related to love at the Palmer are not only about love, but were made out of love.

“These are very much objects that meant a lot to the artists themselves and the people to whom they were gifted,” Mongelluzzo said. “They can tell us something about relationships between people.”